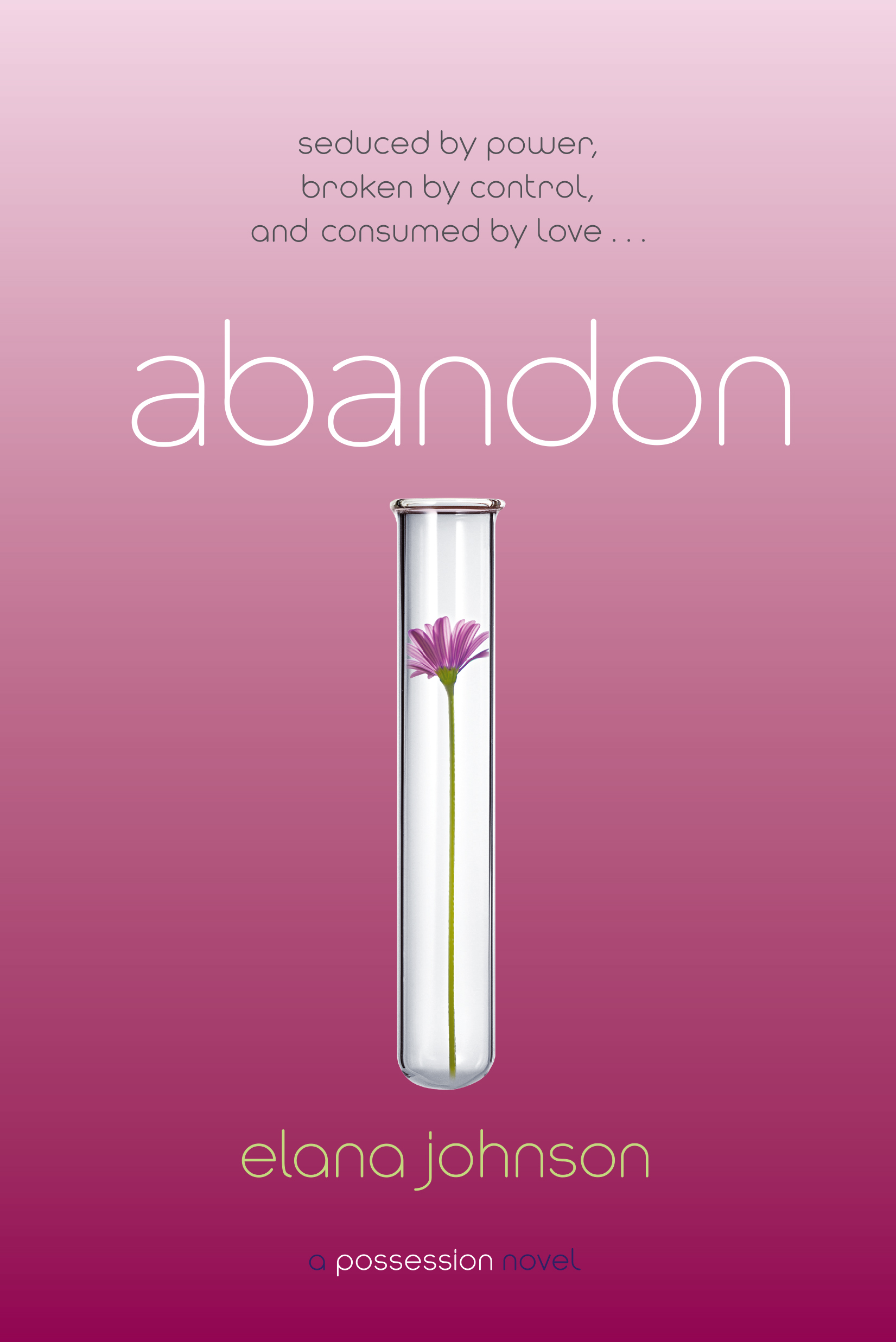 The fight for independent thought becomes a matter of life or death in this sizzling and intense conclusion to the Possession trilogy.

Vi has made her choice between Jag and Zenn, and the resistance may have suffered for it. But with the Thinkers as strong as ever, the rebels still have a job to do. Vi knows better than anyone that there’s more at stake than a few broken hearts.

But there is a traitor among them…and the choices he makes could lead to the total destruction of everything Vi has fought for.

Vi, Jag, and Zenn must set their problems aside for the resistance to have any hope of ending the Thinkers’ reign. Their success means everything…and their failure means death.

Abandon Jag
1. Secrets are hard to keep—especially if your girlfriend can read minds.

“She shouldn’t be a secret,” Vi said, tossing me a pointed look over her shoulder as she straightened the blanket on her bed.

“She is not a secret,” I argued, she being my ex-girlfriend, Indiarina Blightingdale.

I suppressed the desire to roll my eyes. “I’ve had other girlfriends, Vi. Do I need to detail my relationship with each one of them?”

She narrowed her eyes as if she knew I’d only had one girlfriend—Indy—before her. “Only the ones you still have feelings for.” Her voice echoed off the low-hanging rocks of her bedroom and down the hall. No way everyone in the hideout couldn’t hear this conversation.

“I do not have feelings for Indy.” I deliberately kept my voice low.

Vi curled her fingers into tight fists. “She’s all you think about.” She cocked her head to the side, as if reading my thoughts right now. I wondered if she’d already discovered that I used to have a schoolboy crush on her sister.

“You don’t have to listen if you don’t like what you hear,” I shot back. “And I’m only thinking about her because I’m worried about where she is. It’s been two weeks, Vi.” I swallowed back the fear that accompanied the thought of Indy being dead somewhere. “Only she knows what’s happened in the Resistance while I’ve been . . . gone.”

Her fists unclenched, and she closed the space between us with three steps. “Where were you? You know, while you were ‘gone.’ ”

Vi shoved me in the chest. “Stop thinking about her.”

“Stop asking me about where I’ve been.” I stepped close to her again, leaning against the archway as if it would lend me strength to endure this argument.

“You’re only worried about her because you still have feelings for her.”

“Not true,” I growled, our faces only inches apart. “I’m worried about Thane, too, and I can’t stand him.”

“Thanks a lot.” She pushed past me, striding toward the makeshift tech lab, where my brother Pace was standing in the doorway watching us. “So glad to know you hate my father.”

“You hate him too!” I yelled after her, refusing to give her even an inch. She disappeared into the tech lab, and the fight left my body. I retreated to the hole in the wall I called a bedroom, but I couldn’t figure out how to stop thinking about Indy.

See, Indy and I had gotten together on my fifteenth birthday, almost two years ago. And not only because she was an amazing leader in the Resistance. She wasn’t hard to look at either, you know?

I’d been leading the Resistance for three years and didn’t have much time for girls. Sure, I fantasized about Ty—the Seer I had worked with to develop my voice talent. But Pace had claimed her as his as soon as he’d met her, and I’d kept my childish imaginations to myself.

Indy, along with her brother Irvine, had come to a surprise party Pace had planned for my birthday. Not that it was really a surprise. Pace had to get special clearance to leave the tech facility, and since our house was his permanent address, I got the confirmation before he did.

At my party she’d sauntered up to me, slid her arm around my waist, and put her hand in my back pocket. She smiled at me and motioned with her head toward the backyard.

Indy had to take her hand out of my pocket to go through the back door, but I quickly caught it in my own. I was game for whatever she had in mind.

We held hands as we walked toward the back hedge. Indy looked killer under the summer moon. Her pink hair shone fuchsia, and her dark skin and eyes glowed in the soft light. She wore low camouflage pants with a black tank top that lifted just enough to show a strip of bare skin. Her hand was rough and warm in mine. It fit just right, and when she gave it a gentle squeeze, I couldn’t even remember my own name.

I grinned like I’d won the electro-sweeps instead of surviving fifteen years without dying. “Thanks, Indy.”

“So. We going back next week?”

“I guess,” I said, shrugging one shoulder. She wanted to talk about work? What next? The weather?

“Jag, that thing you did with your voice last week was cadence.”

I shrugged again. I hated talking about my talents. It’s not like it actually took any special abilities to use them. They were just part of me. I tried to find her feelings, but I came up blank.

Indy cut me a look from the corner of her eye, a knowing smile playing on her lips. “Nice try,” she said. She slipped her hand out of mine and moved it up my forearm. Her bright yellow fingernails traced a pattern near my elbow.

I tried not to shiver, but it didn’t work. I couldn’t blame the weather—the night was perfectly warm. I wish I could call on the wind to come cool me down.

I couldn’t, so I choked out, “What does that mean?”

She slid her hand back to mine, and heat crept along my skin wherever she touched. “It means that I felt you looking.”

“Looking for what?” I asked.

I suddenly found the hedge in the neighbor’s backyard fascinating. “Oh yeah?”

“Something Irv invented. Nasty tech when you swallow it, but after that it’s dead useful.”

Stupid Irvine. He’s forever inventing something to keep the Thinkers out. I’d always supported him, but now that I couldn’t use my empathic ability to find out what this incredibly hot girl thought about me? Not so much.

Indy traced her nails up to my elbow again. She took hold of my arm and pulled me toward her. “Let’s walk, man.”

“Sure.” I stuffed my hands in my pockets. She laced her arm through mine, and we walked to the front of the house and down the sidewalk.

I wasn’t sure what to say. I’d been on many excursions with Indy, eaten dinner with her tons of times, seen her first thing in the morning after she’d woken up on my living room floor.

But now? Words failed me. My imagination ran wild. How her mouth would feel against mine. What she would taste like.

“You’re quiet for someone with a voice,” she teased.

I grunted. Like I was going to screw anything up by speaking.

She removed her hands from me and put a couple of inches between us. “So. I got a question for ya.”

“When are you gonna kiss me?”

“It’s not like I wanted to get you alone so we could discuss tactics.” Her voice sounded far away, like it came from deep within her throat.

“You’re adorable,” she said, stopping at the end of the street under an orange light.

Heat rushed to my face. “Adorable” was worse than “cute.” Ty had called me that two weeks ago during our training session. I was still pissed off. I wasn’t a puppy.

“Take it back,” I commanded with my voice control all the way up.

She blinked, her eyes glassy, her jaw clenched. Then she smiled. “Ah. The tech doesn’t work against your voice. I’ll tell Irv.”

“You do that,” I said, striding back toward the house. You’re an idiot, I scolded myself. Here I thought Indy liked me, but she was just testing tech for her brother—one of my best friends and an amazing technician for the Resistance.

“Jag!” She caught up to me in a couple of steps and pulled on my arm to get me to stop. “Wait. You haven’t answered my question.”

I glared at her. “I am not a-freakin’-dorable.”

She threw her head back and laughed. The sound was all wild abandon, and her throat looked mighty enticing. But she took one look at my face and sobered.

Leaning in, she smiled. “No kidding. You’re freakin’ hot.”

She stole my lame comeback with her lips. I forgot why I was mad. Indy tasted like salt and apples. Her body was soft, yet hard, against mine. Her skin felt electric, like the pleasurable buzz of tech, under my fingers.

When she pulled away, I could barely breathe.

“Hot,” she said again, burying both of her hands in my back pockets.

I didn’t feel so hot when Gunner burst into the tiny hole I called a bedroom and pulled me from memories that felt like they had happened two lifetimes ago. “Jag, she’s here.”

I didn’t have to ask who she was. I followed him into the corridor, both of us sprinting toward the common chamber.

“Indy,” I called, searching for her pink hair. I recognized some of my old team from the Resistance. Their faces had hollowed. They looked like they’d been to hell and back. Maybe they had been.

“Indy?” I asked. The crowd parted, and there she stood.

“Jag.” She moved toward me, and I was so cracking happy to see her alive that I didn’t notice the way she had her fist cocked back. 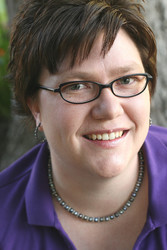 Elana Johnson wishes she could experience her first kiss again, tell the mean girl where to go, and have cool superpowers. To fulfill her desires, she writes young adult science fiction and fantasy. She lives in central Utah where she spends her time with many students, one husband, and two kids. Find out more at ElanaJohnson.com and follow her on Twitter at @ElanaJ.