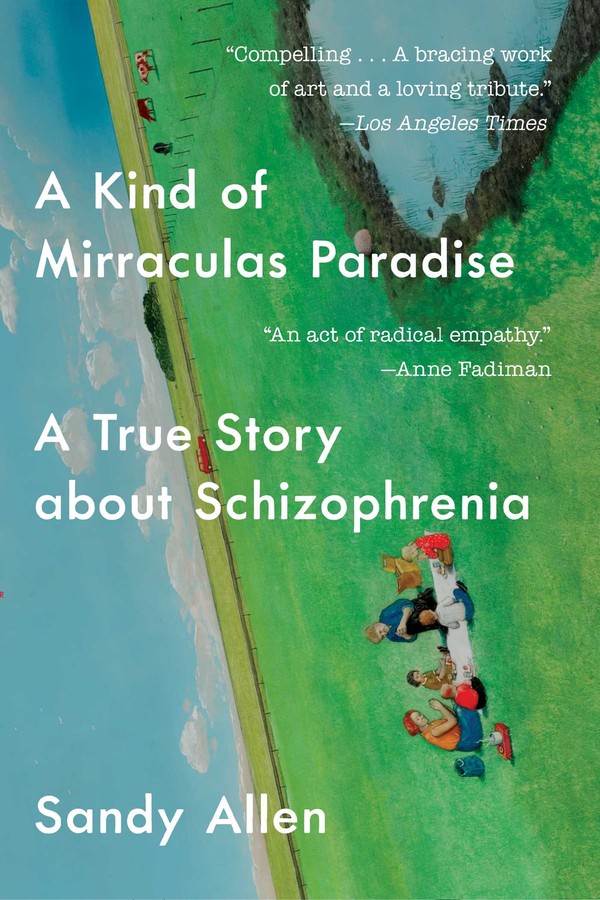 “Compelling…A bracing work of art and a loving tribute” (Los Angeles Times), this propulsive, stunning book illuminates the experience of living with schizophrenia like never before.

Sandra Allen did not know their uncle Bob very well. As a child, Sandy had been told Bob was “crazy,” that he had spent time in mental hospitals while growing up in Berkeley in the 60s and 70s. But Bob had lived a hermetic life in a remote part of California for longer than Sandy had been alive, and what little Sandy knew of him came from rare family reunions or odd, infrequent phone calls. Then in 2009 Bob mailed Sandy his autobiography. Typewritten in all caps, a stream of error-riddled sentences more than sixty, single-spaced pages, the often-incomprehensible manuscript proclaimed to be a “true story” about being “labeled a psychotic paranoid schizophrenic,” and arrived with a plea to help him get his story out to the world.

“Searing” (O, The Oprah Magazine), “enthralling” (Star-Tribune, Minneapolis), and “a marvel” (Esquire), A Kind of Mirraculas Paradise shows how Sandy translated Bob’s autobiography, artfully creating a gripping coming-of-age story while sticking faithfully to the facts as he shared them. Sandy also shares background information about their family, the culturally explosive time and place of their uncle’s formative years, and the vitally important questions surrounding schizophrenia and mental healthcare in America more broadly. The result is a heartbreaking and sometimes hilarious portrait of a young man striving for stability in his life as well as his mind, and an utterly unique lens into an experience that, to most people, remains unimaginable.

“Thrilling…Gorgeous…a watershed in empathetic adaptation of ‘outsider’ autobiography” (The New Republic), A Kind of Mirraculas Paradise is a dazzlingly, daringly written book that’s poised to change conversation about schizophrenia and mental illness generally.

This reading group guide for A Kind of Mirraculas Paradise includes an introduction, discussion questions, and ideas for enhancing your book club. The suggested questions are intended to help your reading group find new and interesting angles and topics for your discussion. We hope that these ideas will enrich your conversation and increase your enjoyment of the book.

Sandra Allen did not know her uncle Bob very well. As a child, she had been told he was “crazy,” that he had spent time in mental hospitals while growing up in Berkeley in the sixties and seventies. But Bob had lived a hermetic life in a remote part of California for longer than she had been alive, and what little she knew of him came from rare family reunions or odd, infrequent phone calls. Then in 2009 Bob mailed her his autobiography. Typewritten in all caps, a stream of error-riddled sentences over sixty, single-spaced pages, the often incomprehensible manuscript proclaimed to be a “true story” about being “labeled as a psychotic paranoid schizophrenic” and arrived with a plea to help him get his story out to the world. In A Kind of Mirraculas Paradise, Allen translates her uncle’s autobiography, artfully creating a gripping coming-of-age story while sticking faithfully to the facts as he shared them. Lacing Bob’s narrative with chapters providing greater contextualization, Allen also shares background information about her family, the culturally explosive time and place of her uncle’s formative years, and the vitally important questions surrounding schizophrenia and mental health care in America more broadly.

1. A Kind of Mirraculas Paradise has an unconventional structure, with chapters alternating between Bob’s autobiography and Sandra’s perspective on what happened to Bob. Why do you think she organized the narrative this way? Discuss instances where the broader contextualization provided by Sandra’s chapters directly influenced your reading of Bob’s own account of his experiences—and vice versa.

2. On reading her uncle’s manuscript early on, Sandra notes, “What surprised me was how much I liked it—his word choices and style” (page 14). Describe Bob’s writerly sensibilities. In what ways did his turn of phrase, word choice, syntax, sentence structure, and tone stand out to you?

3. Some readers may question whether the account Bob wrote should be considered nonfiction. What do you think? In your view is the subtitle, “A True story about Schizophrenia,” fitting?

6. Bob’s manuscript is primarily about his life during the late sixties and seventies, beginning when he is in elementary school and taking us through his adolescence and twenties. Discuss the universal and particular elements of Bob’s coming-of-age—of his quests to find employment, friendship, and love. In what ways was he a product of the culture of the Bay Area during this era? In what ways was his story influenced by his political and socioeconomic background?

8. Sandra is mentioned in Bob’s manuscript exactly once, in a line announcing her birth in 1987. Did this mention make a difference to you when considering her role as the translator of Bob’s biography and author of this book? Why or why not?

9. The title of the book comes from Bob’s description of summers spent at Lake L’Homme Dieu as a child. He later calls his desert shack “paradise” as well (page 256). What are the qualities that make a place paradisiacal for Bob? Compare Lake L’Homme Dieu and the desert shack to living conditions at Herrick Hospital, La Casa Via, and Dorothy’s halfway home, and then to the imaginative societies of Annadonia and Ishmall in Bob’s story.

10. The word “schizophrenic” rarely appears in Bob’s manuscript, possibly, Sandra suggests, as a result of the highly stigmatized nature of the term. Revisit instances where prejudice and misunderstanding surrounding schizophrenia and mental illness are evident—in both Bob’s and Sandra’s chapters. What words and terms are used? How did the meaning and connotation of “schizophrenia” change for you while reading this book?

11. Revisit the last lines of Bob’s manuscript in the chapter titled “The Fifth Portrait” near the end of the book (pages 257–58). What is the effect of reading this undoctored text, exactly as Bob had written it at this point? In what ways does Bob’s description of himself in these lines stand in for the portrait missing from Gene and Agnes’s front hall? In what ways does it not?

1. Consider A Kind of Mirraculas Paradise alongside first-person narratives about schizophrenia, such as The Center Cannot Hold by Elyn Saks and I Never Promised You a Rose Garden by Joanne Greenberg, and memoirs about other forms of mental disorders, such as The Reason I Jump by Naoki Higashida, Look Me in the Eye by John Elder Robison, and The Noonday Demon by Andrew Solomon. How do the works compare and how do they differ? In addition to what we learn about the subject of each memoir, what do these books allow us to realize about society’s treatment of those diagnosed with mental illness?

2. Upon hearing “Voodoo Chile” for the first time on the radio in high school, Bob began to idolize Jimi Hendrix and held him in high esteem for the rest of his life. Listen to the Jimi Hendrix Experience’s album Electric Ladyland on which this track appears.

3. If you feel comfortable doing so, discuss how Sandra Allen’s book has changed your perspective on any family members or friends you have with mental illness.

Sandy Allen is a writer, speaker, editor and teacher. Their essays and features stories have been published by BuzzFeed News, CNN Opinion, Bon Appétit's Healthyish, and Pop-Up Magazine. Sandy was previously BuzzFeed News's deputy features editor. They also founded and ran the online-only literary quarterly Wag's Revue. Sandy's work focuses on constructs of normalcy, including psychiatric disability and gender. Sandy is non-binary trans. Originally from Muir Beach, CA, they live in the Catskills. A Kind of Mirraculas Paradise is their first book. For more, visit HelloSandyAllen.com

"Compelling... A bracing work of art and a loving tribute to a man whose voice, no matter how unpolished, deserves to be heard."

"This book is an act of radical empathy through which the author--and, vicariously, the reader--enters intimately into a life that would otherwise be unintelligible."

– Anne Fadiman, author of The Spirit Catches You and You Fall Down

“To pay great attention and devote steady care to the perspective of another is, in itself, almost miraculous--especially when the Other has been cast as mad and dangerous.  Sandra Allen has brought forward her uncle's life, rendering in exquisite detail what his experiences as a stigmatized, struggling man allowed him to see. This is a truly original piece of work.  I urge you to read it.”

"A breakthrough in meta-biographical writing... [Allen] marries several distinct genres to produce an insight into what it means to be a person with a psychiatric diagnosis...Thrilling... Gorgeous... a watershed in empathetic adaptation of 'outsider' autobiography."

"Enthralling... Being inside [Bob's] head, seeing how life felt and looked to him, is a miraculous thing indeed."

"Sandra Allen has crafted a fearless narrative about what it is really like to grow up under the weight of mental illness . . . Honest, heartbreaking, and often humorous, this remarkable book offers a window into an experience of mental illness that many people often never get the chance to see through."

"Intriguing... mesmerizing... what a journey it is."

"Insightful... Allen offers readers an incredible glimpse into the life of a person battling with schizophrenia."

“A book of many strange and often oddly beautiful pieces that together combine into a story that will make you tremble. A Kind of Miraculous Paradise is a resurrection of sorts, a profound retrieval of a life from beyond the veil with which so many of us obscure the realities of illness and family, loneliness and intimacy."

– Jeff Sharlet, author of The Family

"Righteous, empathetic... [Paranoia] is seldom experienced or portrayed so elegantly as Allen does here."

"Compelling... skillful... vivid... a page-turning biography and family history... a deeply personal story about an enigmatic person living the only way he knows how: by trial and error."