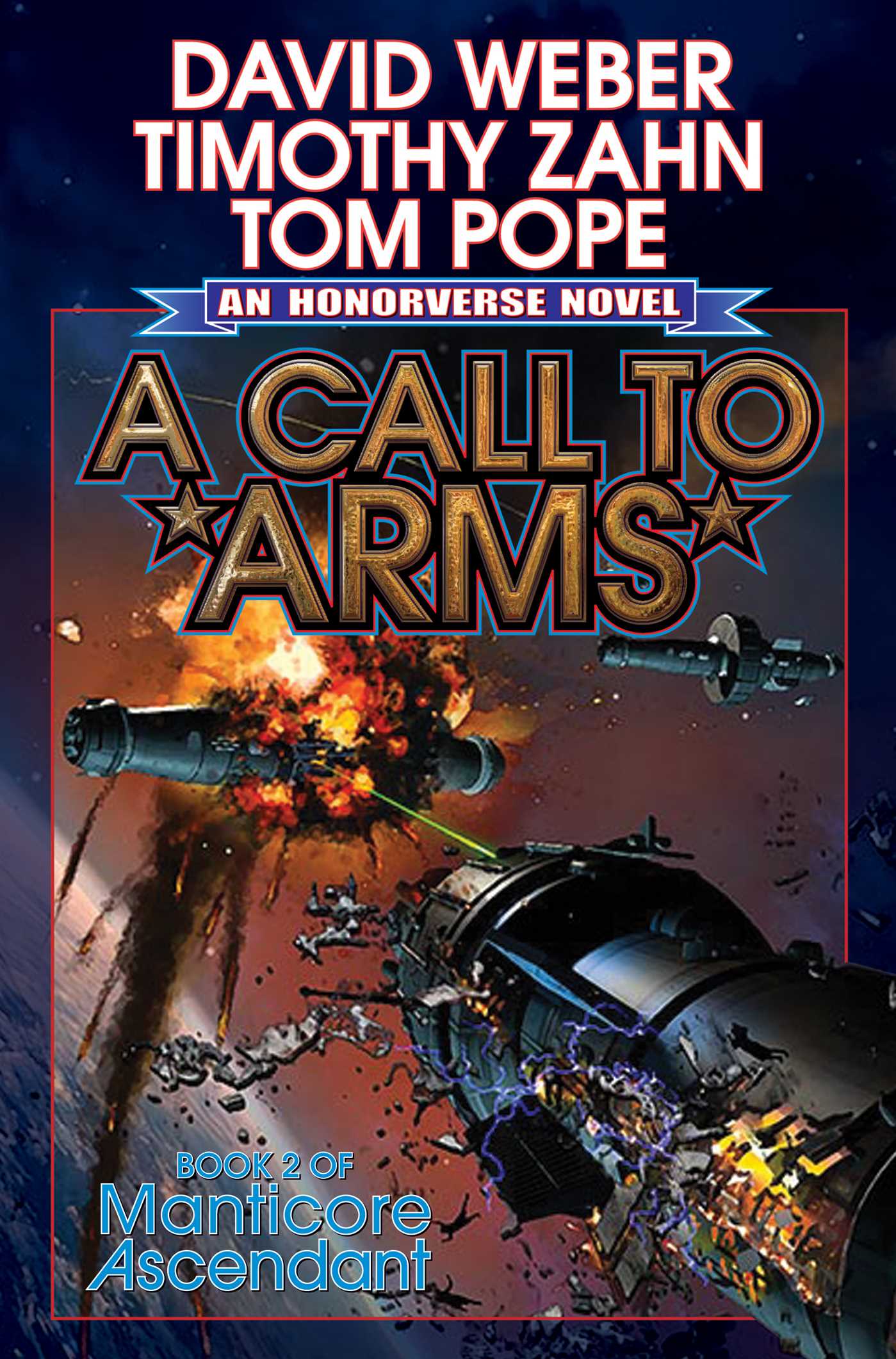 A Call to Arms

Lieutenant Travis Long of the Royal Manticoran Navy is the sort of person who likes an orderly universe. One where people follow the rules.

Unfortunately, he lives in the real universe.

The good news is that Travis is one of those rare people who may like rules but has a talent for thinking outside them when everything starts coming apart. That talent has stood him—and the Star Kingdom—in good stead in the past, and it’s one reason he’s now a “mustang,” an ex-enlisted man who’s been given a commission as a King’s officer.

The bad news is that two of the best ways of making enemies ever invented are insisting on enforcing the rules . . . and thinking outside them when other people don’t. Travis learned that lesson the hard way as a young volunteer in basic training, and he knows that if he could just keep his head down, turn a blind eye to violations of the rules, and avoid stepping on senior officers’ toes, he’d do just fine. But the one rule Travis Long absolutely can’t break is the one that says an officer in the Royal Navy does his duty, whatever the consequences.

At the moment, there are powerful forces in the young Star Kingdom of Manticore’s Parliament which don’t think they need him. For that matter, they’re pretty sure they don’t need the Royal Manticoran Navy, either. After all, what does a sleepy little single-system star nation on the outer edge of the explored galaxy need with a navy?

Unhappily for them, the edge of the explored galaxy can be a far more dangerous place than they think it is. They’re about to find out why they need the Navy . . . and how very, very fortunate they are that Travis Long is in it.

About A Call to Arms:
"The plotting is as solid as ever, with smaller scenes building to an explosive, action-packed crescendo, and the authors strike a nice balance between technical details of space flight and the human cost of war."—Publishers Weekly

Praise for prequel A Call to Duty:
"This exciting book marks the first collaboration of two powerhouses . . . fans of both writers should be quite pleased with the result. Like Robert A. Heinlein and Orson Scott Card, Weber and Zahn are telling a story about a teenage character but writing for readers of all ages."–Booklist

"A new series set in the universe of Weber's popular heroine Honor Harrington gets off to a solid start. . . . Cowriters Zahn and Weber do an excellent job alluding to events known to longtime fans. . . . [T]his astronautical adventure is filled with . . . intrigue and political drama."–Publishers Weekly

About the Honor Harrington series:

“Weber combines realistic, engaging characters with intelligent technological projection and a deep understanding of military bureaucracy in this long-awaited Honor Harrington novel…Fans of this venerable space opera will rejoice to see Honor back in action.”–Publishers Weekly

"[Y]ou can count on Timothy Zahn for three things: clean, sparse prose; good pacing; and great action scenes. The first book in the Cobra War series hits all those marks in admirable style and makes for a quick, entertaining sci-fi novel." —Blogcritics

“[Conqueror’s Heritage] is another finely wrought space adventure . . . [with] social, political and emotional complications, all of which Zahn treats with his usual skill.”—Booklist

With more than eight million copies of his books in print and 30 titles on the New York Times bestseller list, David Weber is a science fiction powerhouse. In the vastly popular Honor Harrington series, the spirit of C.S. Forester’s Horatio Hornblower and Patrick O’Brian’s Master and Commander lives on—into the galactic future. Books in the Honor Harrington and Honorverse series have appeared on 21 bestseller lists, including The Wall Street Journal, The New York Times, and USA Today. Additional Honorverse collaborations include the spin-off miniseries Manticore Ascendant with New York Times best-selling author, Timothy Zahn; and with Eric Flint, Crown of Slaves and Cauldron of Ghosts contribute to Weber’s illustrious list of New York Times and international bestsellers.

Timothy Zahn is a Hugo Award winner and the author of the New York Times #1 bestseller Heir to the Empire, as well as the best-selling Star Wars: Thrawn series of novels. Born in Chicago, he earned a B.S. in physics from Michigan State University and an M.S. in physics from the University of Illinois. He sold his first story to Analog in 1978, and immediately attracted attention as a new writer of science fiction based on real, cutting-edge science. Baen published his popular Cobra trilogy in one volume. His other popular series include the Conqueror and Dragonback novels. With David Weber and Thomas Pope, he is the author of novels A Call to Duty, A Call to Arms, and A Call to Vengeance. Zahn has written more than 50 novels, including the recent Cobra Rebellion series entries Cobra Outlaw and Cobra Traitor.

Thomas Pope is a founder of BuNine, a collection of professionals assisting David Weber in defining and documenting the Honorverse. Tom served as lead editor for House of Steel and is collaborating with David Weber and Timothy Zahn on a new series set in the early days of the Manticoran Navy. He lives in Pittsburgh with his wife, two children, and a constantly growing menagerie of pets.

A Call to Arms