Robert E. Waters is a science fiction and fantasy writer. Since 1994, he has worked in the computer and board gaming industry as technical writer, editor, designer, and producer. A member of the Science Fiction and Fantasy Writers of America, his first professional fiction publication came in 2003 with the story “The Assassin’s Retirement Party,” Weird Tales, Issue #332. Since then he has sold stories to Nth Degree,Nth Zine, Black Library Publishing (Games Workshop), Dark Quest Books, Padwolf Publishing, Mundania Press, Dragon Moon Press, Rogue Blades Entertainment, and the Grantville Gazette. Between the years of 1998–2006, he also served as an assistant editor to Weird Tales, and is still a frequent contributor to Tangent Online, a short fiction review site. Robert currently lives in Baltimore, Maryland, with his wife, Beth, their son, Jason, and their cat, Buzz.

Get updates about Robert E. Waters and recommended reads from Simon & Schuster.
Plus, get a FREE ebook when you sign up! 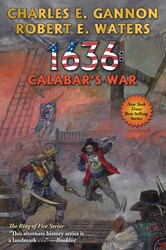