Chris Hondros (March 14, 1970-April 20, 2011) was an American Pulitzer Prize-nominated photojournalist. Born in New York City to Greek and German immigrants, both survivors of World War II, he moved to Fayetteville, North Carolina, as a child. After studying English literature at North Carolina State University and receiving a master's degree from Ohio University's School of Visual Communication, Hondros returned to New York to concentrate on international reporting. Hondros covered most of the world's major conflicts and disasters since the late 1990s, including work in Kosovo, Afghanistan, the West Bank, Iraq, Liberia, Egypt, and Libya. Hondros was also a frequent lecturer and published essayist on issues of war, and he regularly wrote for the Virginia Quarterly Review, Editor & Publisher, the Digital Journalist, and other news publications. Hondros, a staff photographer for Getty Images since 2000, was a two-time finalist for the Pulitzer Prize in breaking news photography: in 2004, for his work in Liberia, and posthumously in 2012, for his coverage of the Arab Spring. During his career, he received dozens of awards, among them honors from World Press Photo, the Pictures of the Year International competition, Visa pour l'Image, and the Overseas Press Club, including the John Faber Award for his work in Liberia and the Robert Capa Gold Medal, war photography's highest honor, for his work covering the conflict in Iraq.

Get updates about Chris Hondros and recommended reads from Simon & Schuster.
Plus, get a FREE ebook when you sign up! 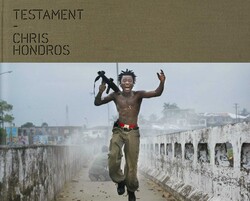