Courtesy of Scattered Among the Nations, Joshua Posamentier

Bryan Schwartz, an Oakland, California-based civil rights attorney, conceived Scattered Among the Nations in the spring of 1999, visiting Jews in 30 countries and over 100 towns and villages on five continents over the following several years. Through their unshakeable devotion and unbounded warmth and kindness, these communities inspired Bryan with new enthusiasm for Jewish practice. Bryan led the effort to create Scattered Among the Nations, Inc. (www.scatteredamongthenations.org), a nonprofit organization designed to educate about Jewish diversity and assist isolated Jewish communities in gaining the recognition and resources to meet their needs. Bryan has spoken to audiences around the world regarding Scattered Among the Nations. His images, articles, and discourse regarding diverse Jewish communities have been published worldwide, among other places, by National Geographic, Fox News, NPR, KPFA, Ha’aretz, The Jewish Forward, Jerusalem Report, Hadassah, B’nai B’rith, and Moment. Bryan’s “Scattered Among the Nations,” “Jews of Color: In Color!” and “Jews of Color: a Renaissance” exhibits have shown throughout the United States since 2003, at galleries, universities, synagogues, Jewish Community Centers, and Jewish museums. Bryan has always been involved in the Jewish community. As a young man, he was an international vice president of the B’nai B’rith Youth Organization. Now he is an active member and the past president of Oakland’s Temple Beth Abraham synagogue. Bryan hopes to continue visiting diverse Jewish communities in the years to come with his wife and two children.

Get updates about Bryan Schwartz and recommended reads from Simon & Schuster.
Plus, get a FREE ebook when you sign up! 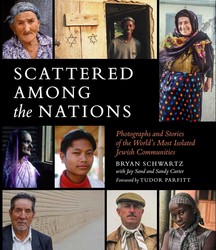