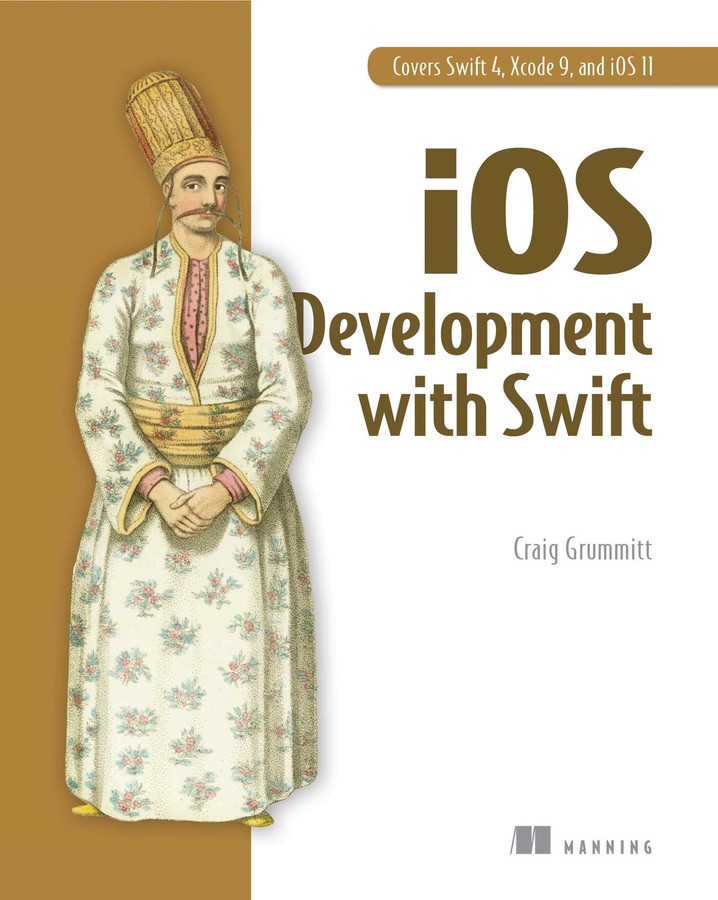 By Craig Grummitt
LIST PRICE $49.99
PRICE MAY VARY BY RETAILER

iOS Development with Swift is a hands-on guide to creating apps for iPhone and iPad using the Swift language. Inside, you'll be guided through every step of the process for building an app, from first idea to App Store. This book fully covers Swift 4, Xcode 9, and iOS 1.

Our video course, iOS Development with Swift in Motion, is the perfect companion to this book, featuring even more projects and examples for you to dig into in the exciting world of iOS development. Find out more at our website: www.manning.com/livevideo/ios-developmen​t-with-swift-lv

Purchase of the print book includes a free eBook in PDF, Kindle, and ePub formats from Manning Publications.

One billion iPhone users are waiting for the next amazing app. It's time for you to build it! Apple's Swift language makes iOS development easier than ever, offering modern language features, seamless integration with all iOS libraries, and the top-notch Xcode development environment. And with this book, you'll get started fast.

iOS Development with Swift is a hands-on guide to creating iOS apps. It takes you through the experience of building an app—from idea to App Store. After setting up your dev environment, you'll learn the basics by experimenting in Swift playgrounds. Then you'll build a simple app layout, adding features like animations and UI widgets. Along the way, you'll retrieve, format, and display data; interact with the camera and other device features; and touch on cloud and networking basics.

Written for intermediate web or mobile developers. No prior experience with Swift assumed.

Craig Grummitt is a successful developer, instructor, and mentor. His iOS apps have had over 100,000 downloads combined!

Craig Grummitt is a successful developer, instructor, and mentor. His iOS apps have had over 100,000 downloads combined!

By Craig Grummitt
LIST PRICE $49.99
PRICE MAY VARY BY RETAILER