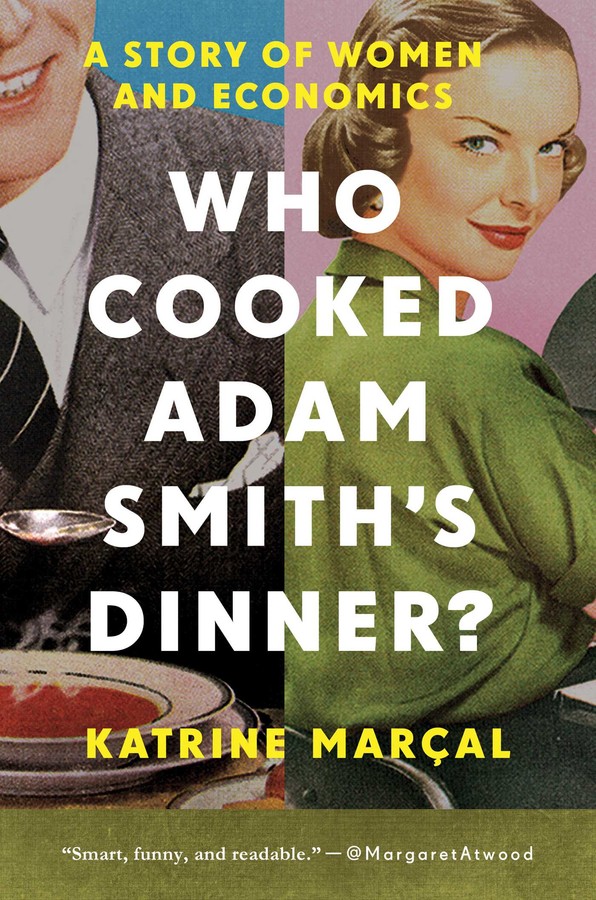 A Story of Women and Economics

A funny, clever, and thought-provoking examination of the myth of the "economic man" and its impact on the global economy.

How do you get your dinner? That is the basic question of economics. When economist and philosopher Adam Smith proclaimed that all our actions were motivated by self-interest, he used the example of the baker and the butcher as he laid the foundations for 'economic man.' He argued that the baker and butcher didn't give bread and meat out of the goodness of their hearts. It's an ironic point of view coming from a bachelor who lived with his mother for most of his life — a woman who cooked his dinner every night.

Nevertheless, the economic man has dominated our understanding of modern-day capitalism, with a focus on self-interest and the exclusion of all other motivations. Such a view point disregards the unpaid work of mothering, caring, cleaning and cooking. It insists that if women are paid less, then that's because their labor is worth less. Economics has told us a story about how the world works and we have swallowed it, hook, line and sinker. This story has not served women well. Now it's time to change it.

A kind of femininst Freakonomics, Who Cooked Adam Smith’s Dinner? charts the myth of economic man — from its origins at Adam Smith's dinner table, its adaptation by the Chicago School, and its disastrous role in the 2008 Global Financial Crisis — in a witty and courageous dismantling of one of the biggest myths of our time.

Katrine Marcal is the lead editorial writer for the Swedish newspaper Aftonbladet, where she writes articles on Swedish and international politics, economics and feminism. For her book Who Cooked Adam Smith's Dinner?, she was shortlisted for the August Prize and won the Lagercrantzen Award. She lives in London.

"A smart, funny, readable book on economics, money [and] women."

"Katrine Marçal’s searing new book exposes the flaws of classical economics and its modern incarnations and in particular its missionary zeal to subordinate all other human aims at the altar of the market. With wit and a hefty dose of anger, she tells a convincing story of the history of economic man. A powerful, and entertaining, story."

"An exciting reassessment of the global economy that provocatively extends the frontiers of the feminist critique."

"Marçal’s romp through the development of the field and the work of Smith, Keynes, Freud, the Chicago School, and Lawrence Summers (among others) is as diverting as it is thoughtful, especially as she points out the gaping hole at its center: the places where self-interest and the market can’t quite reach. Midway through her book, Marçal writes about Betty Friedan’s The Feminine Mystique — in its own way, this vivid, entertaining work is equally groundbreaking."

"Marçal, a columnist for the Swedish paper ­Aftonbladet, examines the age-old economics question, ‘How do you get your dinner?’ with thought-provoking results. Marçal’s analysis chronicles how this system of capitalism came to exist and demonstrates why the idea of the economic man may no longer be a solid fit. This humorous and accessible examination of serious issues at the crossroads of economics and gender equality is intended to stimulate questions more than to provide answers."

"A no-holds-barred critique of how modern economic theory has largely excluded the contributions of women. She drives her point home with the ferocity of a hammer striking an anvil: economic man is a fiction that excludes women."

"Sharp writing, numerous examples and familiar pop culture references (think Pretty Woman, Robinson Crusoe, and the goose that laid the golden egg). Engaging and non-threatening (even for people who break into a sweat when trying to balance their checkbooks). An important book."

"This is not your standard economics text. Marçal, who writes in snappy (and often spirited) prose, focuses on what an alternative, and more inclusive, economics should look like. An accessible and lively primer on the topic. A well-written and thoroughly researched call to change economics into a discipline that makes “room for the entire human existence” that all economists would do well to heed."

"An interesting and thoughtful read."

"An excellent argument for the value of feminism as an analytical lens. A masterpiece of rhetoric, clearheaded analysis, and critical imagination. a model of radical thought. Marçal’s critique—and the anti-capitalist feminist tradition on which it stands—is a historical insight of unimaginable potential."

"Marçal provides a complete history of the ideas behind, and subsequent realities of, market economics. She is a writer’s writer, using brilliant literary and historical metaphors to bring clarity and life to the story."

A Story of Women and Economics