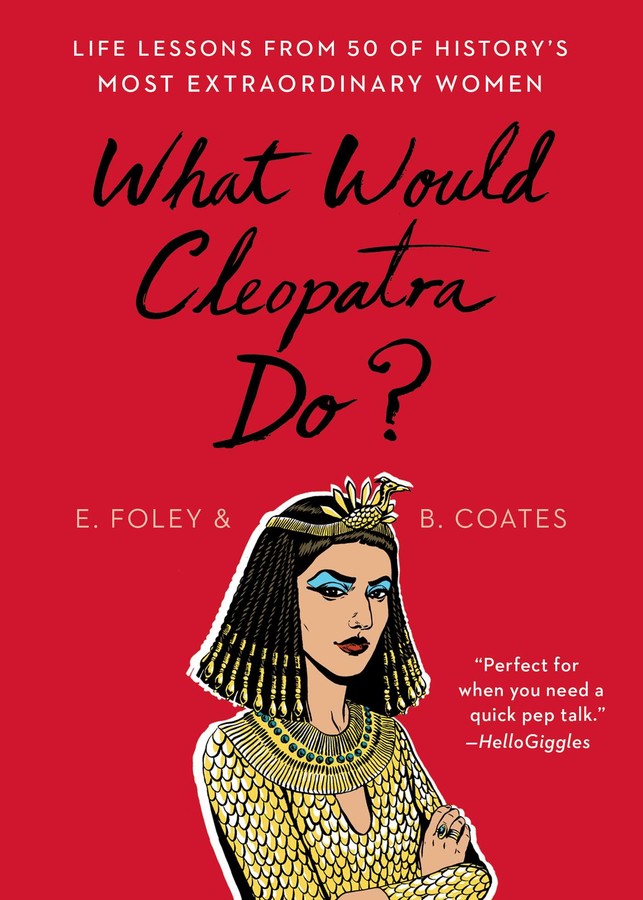 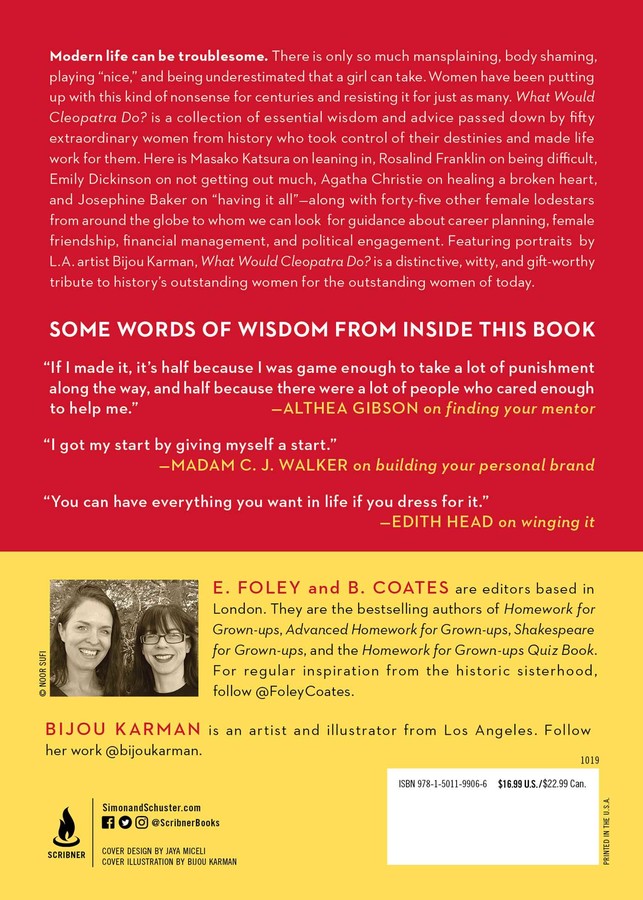 What Would Cleopatra Do?
By Elizabeth Foley and Beth Coates
Read by Madeleine Maby

What Would Cleopatra Do?

Life Lessons from 50 of History's Most Extraordinary Women

By Elizabeth Foley and Beth Coates
LIST PRICE $17.00
PRICE MAY VARY BY RETAILER

“Fun, cheeky” (Booklist), and a visual delight, What Would Cleopatra Do? shares the wisdom and advice passed down from Cleopatra, Queen Victoria, Dorothy Parker, and forty-seven other heroines from past eras on how to handle common problems women have encountered throughout history and still face today.

What Would Cleopatra Do? tackles issues by reminding us of inspiring feminists from the past, telling their stories with warmth, humor, and verve. From sticking up for yourself, improving body image, deciding whether to have children, finding a mentor, getting dumped, feeling like an imposter, being unattractive, and dealing with gossip, we can learn a lot by reading motivational stories of heroic women who, living in much tougher times through history, took control of their own destinies and made life work for them.

Here are Cleopatra’s thoughts on sibling rivalry, Mae West on positive body image, Frida Kahlo on finding your style, Catherine the Great on dealing with gossip, Agatha Christie on getting dumped, Hedy Lamarr on being underestimated—to list only a few—as well as others who address dilemmas including career-planning, female friendship, loneliness, financial management, and political engagement.

Featuring whimsical illustrations by L.A.-based artist Bijou Karman, What Would Cleopatra Do? is a distinctive, witty, and gift-worthy tribute to history’s outstanding women.

What Would Cleopatra Do?
Tired of being talked over in meetings? Of having your patronizing boss bropropriate your ideas and present them as his own? Women have been putting up with this kind of nonsense for countless centuries and resisting it for just as many. Faced with this kind of insult, Norfolk’s famous flame-haired queen would likely have responded: “Incinerate him!” Queen B. was the legendary chief of the Iceni tribe, who lived in East Anglia two thousand years ago. After the Romans, at the behest of Emperor Claudius, invaded Britain in 43 CE, they made a treaty with Boudicca’s husband that generously allowed him to continue to govern his people. However, when he died, this gentlemen’s agreement didn’t extend to the ladies. The Romans took Boudicca’s kingdom and, according to their historian Tacitus, raped her daughters and flogged her. Instead of being cowed by this vile outrage, or simply accepting the inevitable sexual violence women endure in war zones, Boudicca set the world on fire. She led a full-on revolt in 60 or 61 CE, mercilessly burning the key settlements of Colchester, St. Albans, and London to the ground, slaughtering their citizens (both Roman and Briton), and all but wiping the soldiers of the crack Ninth Legion off the face of the earth. This murderous monarch left her mark, literally, in the layer of burned red sediment that you’ll find even today if you dig down deep enough in the cities she razed.

The offenses against Boudicca are clearly far more serious and unforgivable than not being given credit in your workplace, but her emphatic response is something to be emulated, albeit with slightly less disemboweling and arson. Next time someone’s stealing your sunshine, make a claim for what’s yours and refuse to be disrespected. Boudicca nurtured a very literal take-no-prisoners attitude, but she is a source of encouragement for the many of us who struggle with assertiveness and the cultural pressure that pushes women to be conciliatory and likable at all times. This red-haired warrior wasn’t worried about making enemies or causing a scene, and her confident authority meant her tribe, and others, rallied around her cause.

We can’t claim that Boudicca herself had a happy ending: her audacious rebellion was eventually put down at the Battle of Watling Street. Those pesky Romans turned out to be pretty good at fighting after all (as well as at road construction, aqueducts, legal systems, and underfloor heating), and their superior military tactics and clever use of the terrain saw them end up on top. Boudicca is said to have committed suicide to avoid the shame of capture, characteristically both living and dying on her own terms. To add insult to injury, her name has for many centuries been spelled and pronounced wrongly—as Boadicea—because of a typo in one of Tacitus’s manuscripts.

Boudicca’s name, whichever way you write it, is thought to come from the Celtic word for victory and so is the equivalent of the slightly less exciting Victoria. In a pleasing quality-queen fan club, the more recent Queen Victoria (see p. 289), and before her Queen Elizabeth I (see p. 177), kept the flame of Boudicca’s memory alive as part of their personal propaganda during their own reigns. Liz, when stirring her troops against the Spanish Armada, wore a Boudicca-inspired outfit, and Vic named a battleship after her. Without them, it is possible that B.’s feats would have been lost in the mists of time. Her reputation lives on because she categorically refused to be swept aside without a fight by the more powerful forces at play around her. It may still feel like a man’s world out there, but with a lot more of us girding our G-strings, speaking up, and leaning in, perhaps the day will come when the patriarchy doesn’t automatically prevail.

Legend has it that Boudicca is buried on a site that falls between platforms nine and ten of King’s Cross Station in London (one can only imagine what she makes of her bones being rattled by the Hogwarts Express). However, if you’re looking to pay your respects, and meditate upon her resolute and decisive brilliance, the best place to commune with her fiery spirit (in the city she once torched) is by Thomas Thornycroft’s Westminster Bridge statue of her belting along in her infamously weaponized, yet sadly apocryphal, chariot.

Despite being Team Roman, Tacitus gave Boudicca credit for her rousing oratory, quoting her at the Battle of Watling Street: “On this spot we must either conquer, or die with glory. There is no alternative. Though a woman, my resolution is fixed: the men, if they please, may survive with infamy, and live in bondage.” Boudicca endures both as a symbol of resistance and as a feminist icon who confronted masculine aggression with violence at a time when this was way out of a lady’s lane.
Elizabeth Foley

Elizabeth Foley is the editor and author (with Beth Coates) of the bestselling Homework for Grown-Ups, as well as Shakespeare for Grown-Ups and What Would Cleopatra Do?

Beth Coates is an editor and the author (with Elizabeth Foley) of the bestselling Homework for Grown-Ups, as well as Shakespeare for Grown-Ups and What Would Cleopatra Do?

What Would Cleopatra Do?

Life Lessons from 50 of History's Most Extraordinary Women

By Elizabeth Foley and Beth Coates
LIST PRICE $17.00
PRICE MAY VARY BY RETAILER