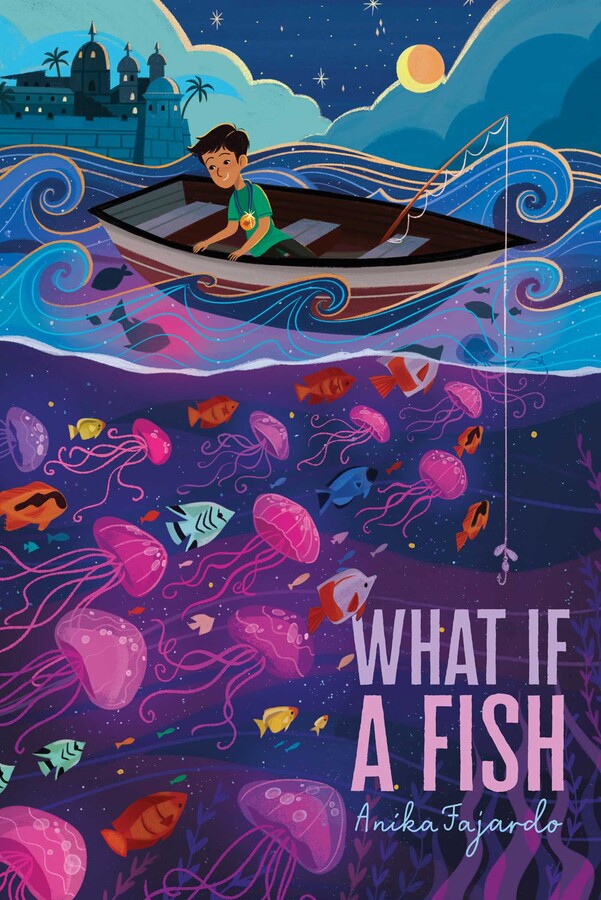 By Anika Fajardo
LIST PRICE $17.99
PRICE MAY VARY BY RETAILER

A whimsical and unflinchingly honest generational story of family and identity where hats turn into leeches, ghosts blow kisses from lemon trees, and the things you find at the end of your fishing line might not be a fish at all.

Half-Colombian Eddie Aguado has never really felt Colombian. Especially after Papa died. And since Mama keeps her memories of Papa locked up where Eddie can’t get to them, he only has Papa’s third-place fishing tournament medal to remember him by. He’ll have to figure out how to be more Colombian on his own.

As if by magic, the perfect opportunity arises. Eddie—who’s never left Minnesota—is invited to spend the summer in Colombia with his older half-brother. But as his adventure unfolds, he feels more and more like a fish out of water.

Figuring out how to be a true colombiano might be more difficult than he thought.

Chapter 1 1
THE WATER by the shore smells like the bottom of the garbage pail right after I take out the trash. I scrunch up my nose and head down the wooden boards of the T-shaped dock. A dad with a small child points across the lake, while a man in a dirty Twins cap blasts country music from an old radio. Leaning my elbows on the dock’s railing, I watch the gray-green fish dart and glide below me.

“What are you doing?” asks a loud voice. It’s the purple-haired girl I noticed at day camp this morning.

“Oh, and that thing won’t?” She nods her chin toward the radio.

She has a point.

“Look.” She leans close—too close—and points at a flyer stapled to the dock next to where I’m resting my elbows. The flyer has a picture of a smiling fish fishing. A speech bubble coming out of its mouth says, Catch me if you can!

I recognize that fish from somewhere.

“You’re right.” She taps the words on the paper and reads aloud, “?‘The Fourteenth Annual Arne Hopkins Dock Fishing Tournament. Enter for your chance to win the five-thousand-dollar prize.’?” She whistles through teeth that stick out like a bunny’s. “That’s a lot of cash. Who’s Arne Hopkins?”

“No idea. I never heard of him until a couple of weeks ago when I found this.”

I pull a smooth disc out of my pocket. It’s a medal—orangish pink, like it’s trying to be bronze. Third place. On one side is a picture of the same smiling fish holding a fishing rod, and the words “2nd Annual Arne Hopkins Dock Fishing Tournament” are squeezed in around the circle.

The girl leans in, and I realize that her hair isn’t completely purple, just the ends. Most of it’s blond, making her look kind of like a sunset. She grabs the medal from my hand and flips it over. I don’t need to look at it to know that it says Eduardo Aguado León in faded engraved script.

“Your dad won this contest?” The girl stares at me like I’m giving away the secrets of the universe.

“I suppose.” I don’t feel the need to tell her that I barely remember him, much less know if he really won some fishing tournament.

“You going to enter?” she asks, handing me back the medal.

I snap my fingers shut around the disc. “It says you have to have a team—at least two people.”

“Why don’t you and your dad enter?”

I ignore her question. Instead I say, more to myself than to her, “If Liam were still here, he would’ve been my partner. But he just moved away.”

“I don’t know who Liam is, but you’re in luck,” the girl says. She squints her eyes and places one hand behind her back and the other flat against her stomach. She isn’t smiling, but she winks at me as she bows deeply at the waist. “I guess I moved to Minnesota just in time. I’ll be your partner.” Upright again, she holds out her hand like a grown-up. “Pleased to meet you. I’m Cameron.”

I look at her hand. The nails are bitten down, and her wrist has a stain of green marker, probably from the nametag decorating we had to do this morning. Kamp Kids day camp—also known as summer day care—is just as pointless as I thought it would be. This morning we were forced to play name games in big circles. I wasn’t in Cameron’s group. Then we ate our bag lunches under trees while getting dive-bombed by flies. I’m desperately counting the minutes until my half brother arrives from Colombia and I don’t have to go to camp anymore. Just seven more days.

“Well?” Cameron is looking at me expectantly. “Aren’t you going to tell me your name? That’s what people do, you know.”

“People call me—” I decide I don’t want to tell her what people call me. “Eddie,” I say, because it’s true. Short for Edward Aguado. Like my dad’s name, only different. Our names aren’t the only things that make us different.

She squints at me. “Where are you from, Eddie?”

“Like I said, here. Minneapolis,” I interrupt. “What grade are you in?”

“Going into sixth. Starting Central Middle School in the fall.”

She pulls a phone out of her jeans pocket and snaps a picture of the flyer. I wish I had a phone. My mom and her rules.

“I went to Catholic school before,” Cameron says as if I had asked her. “Yep. Moving from California. Switching to public school. Life is really something, isn’t it?”

As a matter of fact, it really is. I pat my pocket where Papa’s medal is safely tucked away. Two weeks ago I’d never heard of the Arne Hopkins Dock Fishing Tournament, and now I’ve seen it twice.

“What do you say?” Cameron puts her phone away. “We should enter. What do we have to lose? Don’t you want to win five thousand dollars?”

Five thousand dollars? Last week the repair shop told Mama that something needed to be replaced in her car. Something expensive. I don’t know what. She asked how long she could wait to fix the Honda. “You got a couple months, sweetheart,” the mechanic said. She rolled her eyes. She hates when people talk to her like that.

Two thousand five hundred dollars sure would help. I bet that would be enough for the mechanic to fix Mama’s Honda.

“What do you say, Eddie? Partners?”

My fingers grip the medal in my pocket. I think of Papa. What if I could win a medal just like he did? 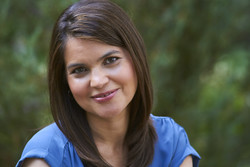 Anika Fajardo was born in Colombia and raised in Minnesota. She wrote a book about that experience, Magical Realism for Non-Believers: A Memoir of Finding Family, which was published by University of Minnesota Press. A writer, editor, and teacher, she lives in the very literary city of Minneapolis. What If a Fish is her first middle grade novel.

"Poetic and believable. Multilayered and convincing, the book will have readers rooting for its sweet and smart protagonist."

"A whimsical and inviting #OwnVoices story of family, friendship, and identity."

"This is a beautifully written tale–a gentle story that explores the depths of grief, the loss of loved ones, the expanses of family, and the building blocks that make all of us human. So what does this have to do with fish, or fishing? Not a whole lot, and everything. I highly recommend you read the book to find out."

By Anika Fajardo
LIST PRICE $17.99
PRICE MAY VARY BY RETAILER