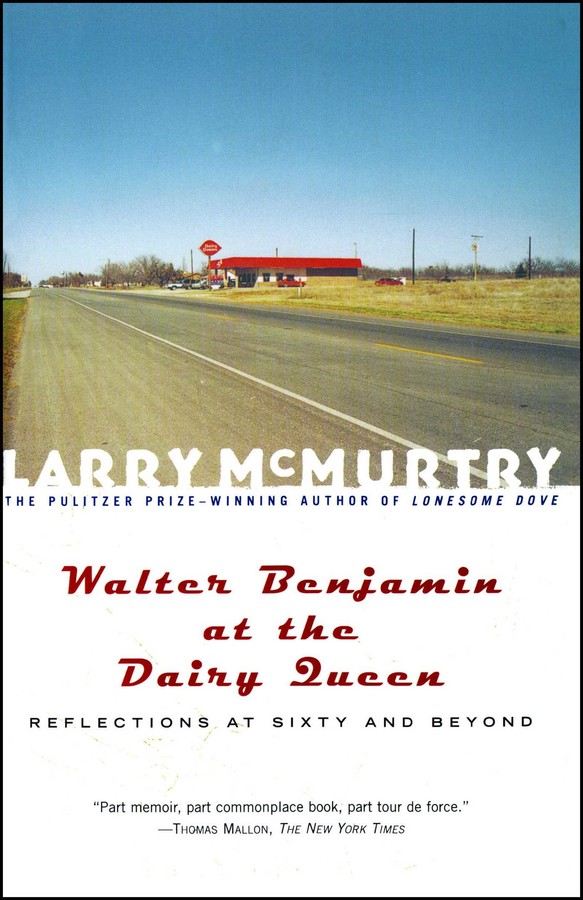 Walter Benjamin at the Dairy Queen

Reflections on Sixty and Beyond

By Larry McMurtry
LIST PRICE $17.00
PRICE MAY VARY BY RETAILER

In a lucid, brilliant work of nonfiction, Larry McMurtry has written a family portrait that also serves as a larger portrait of Texas itself, as it was and as it has become.

Using an essay by the German literary critic Walter Benjamin that he first read in Archer City's Dairy Queen, McMurtry examines the small town way of life that big oil and big ranching have nearly destroyed. He praises the virtues of everything from a lime Dr. Pepper to the lost art of oral storytelling, and describes the brutal effect of the sheer vastness and emptiness of the Texas landscape on Texans, the decline of the cowboy, and the reality and the myth of the frontier.​

McMurtry writes frankly and with deep feeling about his own experiences as a writer, a parent, and a heart patient, and he deftly lays bare the raw material that helped shape his life's work: the creation of a vast, ambitious, fictional panorama of Texas in the past and the present. Throughout, McMurtry leaves his readers with constant reminders of his all-encompassing, boundless love of literature and books.

In the summer of 1980, in the Archer City Dairy Queen, while nursing a lime Dr Pepper (a delicacy strictly local, unheard of even in the next Dairy Queen down the road -- Olney's, eighteen miles south -- but easily obtainable by anyone willing to buy a lime and a Dr Pepper), I opened a book called Illuminations and read Walter Benjamin's essay "The Storyteller," nominally a study of or reflection on the stories of Nikolay Leskov, but really (I came to feel, after several rereadings) an examination, and a profound one, of the growing obsolescence of what might be called practical memory and the consequent diminution of the power of oral narrative in our twentieth-century lives.

The place where I first read the essay, Archer City's Dairy Queen, was apposite in more ways than one. Dairy Queens, simple drive-up eateries, taverns without alcohol, began to appear in the arid little towns of west Texas about the same time (the late sixties) that Walter Benjamin's work began to arrive in the English language -- in the case of Illuminations, beautifully introduced by Hannah Arendt. The aridity of the small west Texas towns was not all a matter of unforgiving skies, baking heat, and rainlessness, either; the drought in those towns was social, as well as climatic. The extent to which it was moral is a question we can table for the moment. What I remember clearly is that before the Dairy Queens appeared the people of the small towns had no place to meet and talk; and so they didn't meet or talk, which meant that much local lore or incident remained private and ceased to be exchanged, debated, and stored as local lore had been during the centuries that Benjamin describes.

The Dairy Queens, by providing a comfortable setting that made possible hundreds of small, informal local forums, revived, for a time, the potential for storytelling of the sort Walter Benjamin favored. Whether what he favored actually occurred, as opposed to remaining potential, is a question I want to consider in this essay.

On that morning in 1980, Benjamin's tremendous elegy to the storyteller as a figure of critical importance in the human community prompted me to look around the room, at that hour of the morning lightly peopled with scattered groups of coffee drinkers, to see whether I could. spot a loquacious villager who -- even at that late cultural hour -- might be telling a story. And if so, was anyone really listening?

Certainly if there were places in west Texas where stories might sometimes be told, those places would be the local Dairy Queens: clean, well-lighted places open commonly from 6 A.M. until ten at night. These Dairy Queens combined the functions of tavern, café, and general store; they were simple local roadhouses where both rambling men and stay-at-homes could meet. To them would come men of all crafts and women of all dispositions. The oilmen would be there at six in the morning; the courthouse crowd would show up about ten; cowboys would stop for lunch or a midafternoon respite; roughnecks would jump out of their trucks or pickups to snatch a cheeseburger as their schedules allowed; and the women of the villages might appear at any time, often merely to sit and mingle for a few minutes; they might smoke, sip, touch themselves up, have a cup of coffee or a glass of iced tea, sample the gossip of the moment, and leave. Regular attendance was necessary if one hoped to hear the freshest gossip, which soon went stale. Most local scandals were flogged to death within a day or two; only the steamiest goings-on could hold the community's attention for as long as a week.

And always, there were diners who were just passing through, few of whom aspired to stay in Archer City. They stopped at the Dairy Queen as they would at a gas station, to pee and take in fuel, mindful, gloomily, that it was still a good hundred miles even to Abilene, itself no isle of grace. Few of these nomads, if they had stories to tell, bothered to tell them to the locals -- and if they had wanted to tell a story or two, it is doubtful that anyone would have listened. People on their way to Abilene might as well be on their way to hell -- why talk to them? Folks in Archer City knew the way to hell well enough; they need seek no guidance from traveling men.

All day the little groups in the Dairy Queen formed and re-formed, like drifting clouds. I stayed put, imbibed a few more lime Dr Peppers, and reread "The Storyteller," concluding that Walter Benjamin was undoubtedly right. Storytellers were nearly extinct, like whooping cranes, but the D.Q. was at least the right tide pool in which to observe the few that remained.

"The Storyteller" had been published in a journal called Orient und Okzident in the year of my birth (1936, well before electricity had arrived in the rural parts of the county where I grew up; it arrived, dramatically, when I was five, courtesy, we all felt, of FDR). It was startling to sit in that Dairy Queen, reading the words of a cosmopolitan European, a man of Berlin, Moscow, Paris, and realize that what he was describing with a clear sad eye was more or less exactly what had happened in my own small dusty county in my lifetime. I was born, in the year of the essay, into a world of rural storytellers -- and what had become of them? Were any of the coffee drinkers sitting nearby doing any more than escaping the heat? Were they exchanging experiences, were they curious about life, or were they just hot?

If the latter, they could hardly be blamed -- the temperature had soared to a Sudan-like 116 that day, forcing the cancellation of the long-awaited (a century awaited), first ever Archer County marathon, a much anticipated high spot of the county's centennial celebration, itself a fortnight-long event, or congeries of events, which I had come home to watch. The celebration was certainly appropriate, but the marathon was a different matter, one in which I personally had not been able to invest much belief. Though I had long made a living by imagining unlikely lives, it was nonetheless not easy to imagine the county's dairy farmers and roughnecks and cowboys, and their wives or women, lumbering along the county's roads for anything like twenty-six miles. The marathoners, if any, would undoubtedly be imports, pros or semipros whose connection to our one-hundred-year-old county would very likely be negligible. All the same, calling off the run on a day when it was going to be 116 seemed a wise, even a compassionate policy. At 116 Fahrenheit people are likely to drop dead while doing nothing more strenuous than picking their teeth.

William Murchison The Washington Times The kind of long, deep wisdom found between these covers should occasion long, deep thought, suitable for the Dairy Queen or for that matter anywhere.

Walter Benjamin at the Dairy Queen

Reflections on Sixty and Beyond

By Larry McMurtry
LIST PRICE $17.00
PRICE MAY VARY BY RETAILER