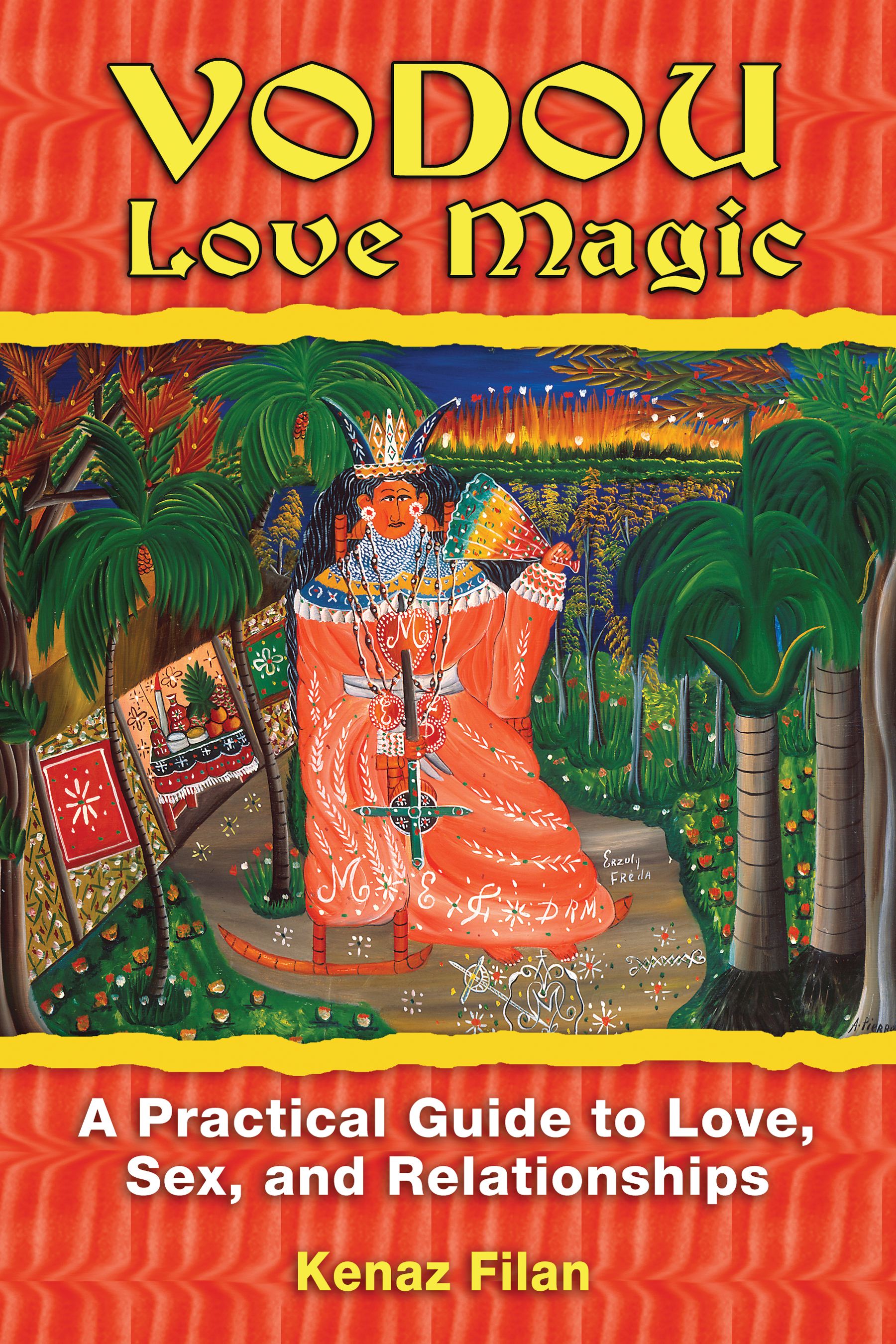 By Kenaz Filan
LIST PRICE $16.99
PRICE MAY VARY BY RETAILER

A working guide on how to find love and sexual fulfillment by working with the lwa, the spirits of Haitian Vodou

Haitian Vodou, like other folk traditions, is an eminently practical craft. Vodou practitioners see their relationship with the lwa--the spirits honored in Haitian Vodou--as mutually beneficial rather than one-sided. In return for sincere offerings, the lwa are happy to provide protection and support in dealing with life’s problems--which more often than not concern love.

In Vodou Love Magic, Kenaz Filan details the myriad aspects of love and sex governed by the different lwa and explains what services each can provide in attaining fulfilling relationships--and who will likely offer the best wisdom for your needs. If you are having trouble meeting people, Legba’s Opening the Door spell can resolve this difficulty. If you wish more fire in a relationship, then you should work with the warrior spirit Papa Ogou. Filan presents easy-to-follow instructions for numerous love spells and also reveals how the lwa offer counsel for dealing with ending relationships, toxic behavior patterns like codependency, or romantic triangles.

Vodou Love Magic does not provide a magic genie who will fulfill every wish, but it does offer access to a team of spirits who can help transform dreams into realities.

The ocean has always fascinated us with its beauty and its danger, with its sparkling shallows and its murky depths. Few things are as eternal as the sea, yet few things are as changeable. In a moment its placid surface may be lashed with storms; its most peaceful coves can hide dangerous undertows. La Sirene is as mysterious as the ocean she rules. If Freda represents the emotions, La Sirene represents the deepest parts of the subconscious. Freda’s joy and sorrow are easy to read; La Sirene is eternally mysterious and inscrutable.
Those who are favored by La Sirene will often have an air of “unearthliness” about them. Like the merpeople or the faeries, La Sirene’s children and students seem to come from somewhere else. People find them unsettling yet unforgettable. They show the true meaning of the word glamour--a compelling aura of romance, mystery, and enchantment. La Sirene can give you real charisma--something that has little to do with physical appearance and everything to do with charm, magnetism, and presentation.

In Haiti Vodouisants treat La Sirene with love and respect . . . but temper that with a good bit of caution. Some say that La Sirene “walks on both roads.” In her benevolent Rada aspect she can bring luck and good fortune, while the dangerous La Sirene Petwo lures people to a watery death. Some images of La Sirene highlight her dual nature by showing her with two sides, one white and one black. La Sirene will sometimes take those she fancies “beneath the waves” to Gineh, the mystical land under the sea where she reigns with her husband, Met Agwe. There she and other lwa will teach them magical secrets before returning them to our world weeks or years later. When they come back, they will have pale skin and straight hair like La Sirene and will be powerful magicians. At other times La Sirene will take those she favors and never return them. Many Haitians will not put their heads below water if they are swimming in the ocean, believing La Sirene may enchant them if they do.
Like the Sirens of Greek mythology or the Russalki of Russian lore, La Sirene is known for her beautiful voice. Like these lovely but dangerous water nymphs, her singing is associated with enchantment.

To introduce yourself to La Sirene, burn a simple pale blue or pale green candle. Sprinkle a little salt water on the ground, and ask Papa Legba to open the door so La Sirene can come to visit you. Take time to talk with her; give her your respects and tell her who you are. You should do this a few times before you start doing any kind of work with her. Like any rich and important lady, La Sirene is very busy. She’s not going to do favors for you until she knows you and likes you.
When creating a shrine for La Sirene, Haitians often use the Stella Maris (Star of the Sea), a beautiful lady in white rising from the ocean. Since La Sirene is a mermaid, other houses use mermaids as her symbol. You can use these images, or other images that remind you of beautiful ocean queens. La Sirene also likes blue flowers, seashells, coral, driftwood, sea glass, sea floaters, and other things from the ocean. Many Haitian images show La Sirene holding a comb in one hand and a mirror in the other. Giving her a nice comb and mirror--the finest you can afford--is a sure way to win her affection.
La Sirene’s colors are white and pale blue-green, a color that is also known as sea blue. You can give her cosmetics in those colors, particularly eye shadow and lip gloss. You can also give her a nice clear crystal bowl. Put some sea glass on the bottom, along with some shells and other small sea items. Then fill it with seawater, or with spring water to which you have added a few pinches of sea salt. Alongside this you can place a champagne glass, in which you give her offerings of orgeat, champagne, or some other sweet liqueur, and a nice white or pale blue-green plate on which you present offerings of white cakes, white candy, or other sweet white things. Place this all on a pale blue or white silk cloth.
La Sirene is a wonderful spirit--but she can also be temperamental. As with Freda, you must make sure that you follow through on any promise that you make to her. Otherwise, she is likely to take away anything that she has helped you to receive, and more. Keep her things away from any shrine or offering you have made to the dead, and do not give her anything black. If you smoke be sure not to light up while you are working with La Sirene or around her things, since she dislikes the smell of tobacco.
Whatever else you do, be sure that you always treat her with the respect any diva demands. You don’t need to walk on eggshells around her, or tremble in fear, but treat any work you do with La Sirene as a serious endeavor. The more effort you put into doing these spells, the more reward you will gain from them. Once you’ve gained La Sirene’s attention and affection, you will find yourself becoming more magnetic and charming.
You also need to remember that La Sirene is considered one of the “cooler” lwa. The changes that she makes are generally slower but more long-lasting than those done by “hotter” spirits. Picture the way the ocean reshapes rocks and you’ll have an idea of how La Sirene works. If you’re expecting these changes to happen overnight, you’re likely to be disappointed. If you stick with the work and allow La Sirene to do her gradual but powerful magic, you’ll see permanent and life-changing results.
Kenaz Filan

"Kenaz Filan presents a wonderfully sane, mature, and effective approach to Vodou love magic with the intelligence and worldliness that are all too often lacking in this area of practice. Added bonus: it's polyamory-friendly."

"Far more than just another book of love spells, Vodou Love Magic encourages readers to utilize common sense, emotional awareness, and psychological self-evaluation. Brimming with history, honesty, and experience, this is a book for anyone wishing to deepen the relationship with the self, others, and the ancient ones."

"Self love and inner strength are far more important than anything you will get out of a relationship, and I believe this text can help to enforce that upon magickal practitioners."

“Did you ever wish that your heart came with an owner’s manual? Well, this is it. Kenaz Filan explains how relationships work, how to form them, and how to fix them when they’re broken. Vodou Love Magic is a practical yet entertaining manual for romantic fulfillment, ideal for practitioners of Afro-Caribbean magic and also suitable to people new to the tradition. Most highly recommended.”

“Vodou Love Magic is a seductive velvet hammer. It is both a primer filled with practical advice on relationships and a luscious, fun-to-read book that gives the reader the straight dope on magick and spirit work.”

– Tannin Schwartzstein, coauthor of The Urban Primitive: Paganism in the Concrete Jungle

"Readers tired of the usual dating avenues--websites, bars, reality television--may want to check out this compilation of Haitian Vodou love spells. . . . to borrow from another tradition, lwa often help those who help themselves."

". . . the book includes very useful and crucial information on love and relationships themselves. Rather than promising to get your lover back, Filan offers a plethora of troubleshooting information to try before doing spellwork . . . Good stuff all around."

By Kenaz Filan
LIST PRICE $16.99
PRICE MAY VARY BY RETAILER