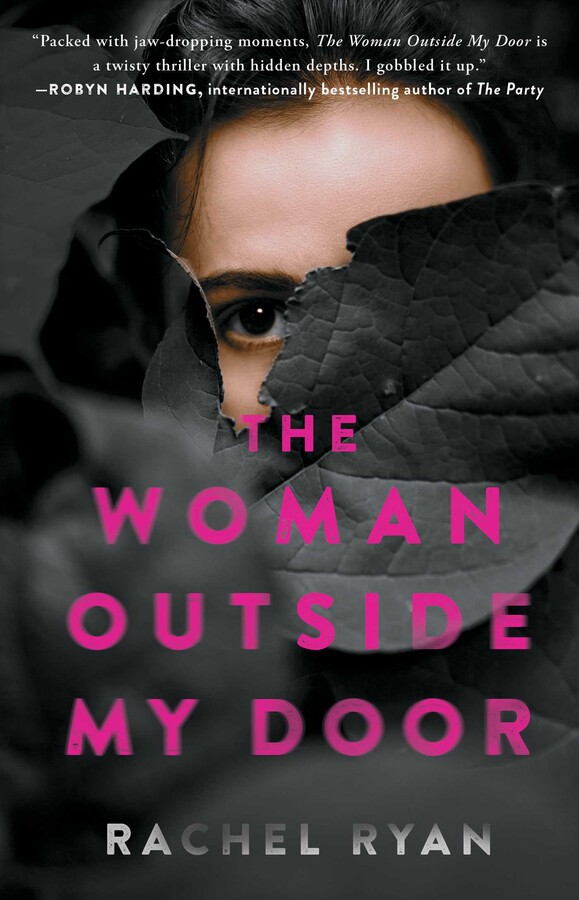 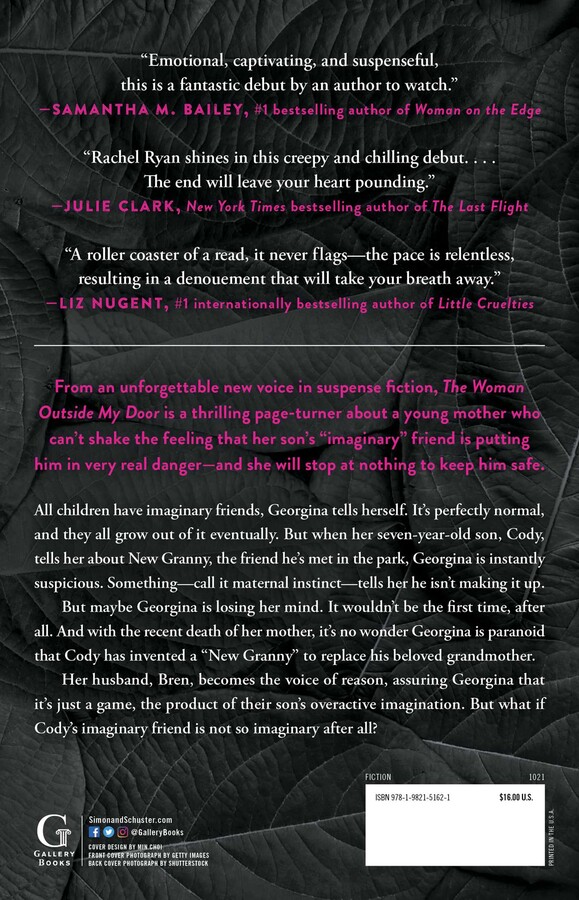 The Woman Outside My Door

By Rachel Ryan
LIST PRICE $16.00
PRICE MAY VARY BY RETAILER

From “a bright new voice in psychological thrillers” (Erin Kelly, USA TODAY bestselling author of He Said/She Said), The Woman Outside My Door is an unputdownable page-turner about a young mother who can’t shake the feeling that her son’s “imaginary” friend is putting him in very real danger—perfect for fans of Lisa Jewell and Mary Kubica.

All children have imaginary friends, Georgina tells herself. It’s perfectly normal, and they all grow out of it in the end. But when her seven-year-old son, Cody, tells her about New Granny, the friend he’s met in the park, Georgina is instantly suspicious. Something—call it maternal instinct—tells her he isn’t making it up.

But maybe Georgina is losing her mind. It wouldn’t be the first time, after all. And with her own mother’s recent death leaving her bereft and trying to cope with life as a busy working mom, it’s no wonder she’s feeling paranoid that Cody has invented a “New Granny” to replace his beloved grandmother.

Her husband, Bren, becomes the voice of reason, assuring Georgina that it’s just a game, the product of their son’s overactive imagination. But what if Cody’s imaginary friend is not so imaginary after all?

“Packed with jaw-dropping moments, The Woman Outside My Door is a twisty thriller with hidden depths” (Robyn Harding, internationally bestselling author of The Party) that will keep you guessing until the shocking last page.

Chapter One CHAPTER ONE
DUBLIN, IRELAND, 2014

On that crisp January afternoon, the park lay silvery and deserted, coated in a thin layer of frost. The grass crunched under Georgina’s feet as she followed shrieks of laughter to a cluster of evergreen bushes and trees.

“Boys!” she called towards the bushes. “Out where I can see you, please!”

Luke and Patrick, her son’s friends, tumbled out first. They were giggling, faces flushed so pink Georgina doubted they felt the cold at all.

“Come on, you two, back to the playground.”

They bolted off obediently. But Cody did not emerge.

Of course her child would be the defiant one. Georgina sighed.

“Cody, don’t make me come in there and get you.”

Still nothing. Luke and Patrick had reached the playground. Their delighted screams echoed over the otherwise silent fields. A distant dog walker was the only other person in sight.

Just as Georgina was about to push through the branches herself, the leaves shivered, and her son appeared.

Her annoyance melted away in the face of that cheeky half smile.

“Come on. Your friends are at the playground.” She ruffled his muss of dark hair as they began to walk.

He was sucking on a lollipop he hadn’t had earlier.

Georgina frowned. “Where did you get that?”

Cody took the lollipop out of his mouth. “The old lady gave it to me.”

“The old lady in the bushes.”

He popped it back in his mouth and made to run off after his friends. Georgina stopped him.

“You were talking to an old lady in the bushes? Just now?”

Cody nodded, impatient to be off.

“Why would she give you a lollipop, Cody?”

He shrugged. “She said she was my granny.”

The shiver that traveled down Georgina’s spine had nothing to do with the cold. Each hair on the back of her neck stood up as if brushed by a spiderweb.

“Cody,” she said, when she trusted herself to speak, “that’s not right. You know Granny is dead.”

Georgina nodded, too shaken to continue the conversation, and watched him tear off to the playground.

She turned back towards the bushes. They were still. She looked around the park but could see no one. Even the dog walker had disappeared from sight.

Georgina walked over to the thicket of bushes and trees.

She took a step closer, then another, and tried peering through the leaves. But all she could see were tree trunks and darkness.

Suddenly self-conscious, she backed away and cut a brisk path to the playground.

“Cody,” she asked, when she managed to pull him away from his friends, “where did the lollipop really come from?”

“The lady. I told you.” He wriggled out from under her grasp.

But Cody was racing back to his friends.

Georgina sat down on a bench.

She said she was my granny.

She wanted to cry. As of last year—July 4, a date now carved into Georgina’s heart—Cody didn’t have a grandmother. Bren’s parents had passed away before Cody was born, but Georgina’s mother had been a warm, wonderful presence in her grandson’s first seven years of life. Now she wouldn’t see his eighth birthday.

Georgina wiped away a tear. She didn’t know what would compel Cody to say such a thing, but it was upsetting; it was wrong.

“Mom!” Cody was hanging upside down off the climbing frame. “Look at me, look at meee!”

“I see you, sweetie!” Georgina forced a cheerful tone. She wished now that she hadn’t agreed to this playdate, but it was too late. Luke’s and Patrick’s respective parents weren’t picking them up until seven. Georgina felt tired at the thought.

As they left the park, she looked back over her shoulder, across the icy fields to that lonely patch of trees—and again felt that soft spiderweb brush against the hairs on the back of her neck. 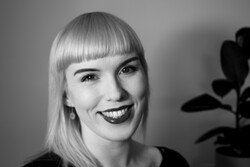 Rachel Ryan was born and raised in Dublin, Ireland. She can usually be found writing in coffee shops, hanging around libraries, or walking the streets of Dublin, making up stories. The Woman Outside My Door is her first novel.

The Woman Outside My Door

By Rachel Ryan
LIST PRICE $16.00
PRICE MAY VARY BY RETAILER