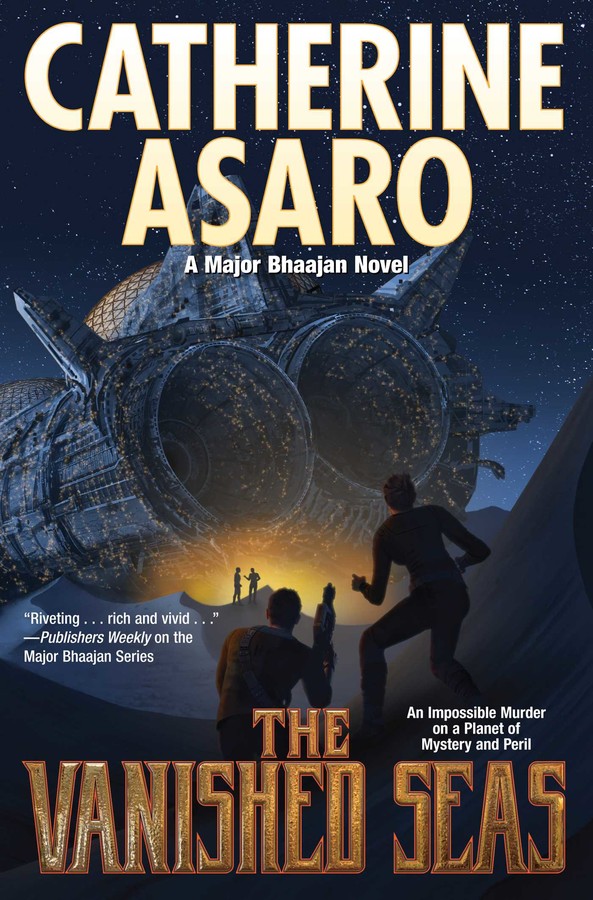 SURVIVE THE CITY OF CRIES

Bhaajan grew up in the Undercity, a community hidden in the ruins buried beneath the glittering City of Cries. Caught between the astonishing beauty and crushing poverty of that life, and full of wanderlust, she enlisted in the military. Now retired, Major Bhaajan is a private investigator who solves cases for the House of Majda, a royal family centered in Cries. The powerful elite of the City of Cries are disappearing, and only Bhaajan, who grew up in the Undercity, can find them—if she isn’t murdered first.

About The Vanished Seas:
“Catherine Asaro continues exploring the underbelly of her baroque, decadent Skolian Empire with this latest adventure of Major Bhaajan, private eye to the highest nobility. . . . It’s a story full of intrigue, mystery, and action. Along with Asaro’s trademark deeply human characters and intricate politics comes a noir-flavored plot that drips with menace and secrets. Major Bhaajan is a compelling character, smart and sympathetic, and both the squalid Undercity and the decadent City of Cries are engrossing. Those who are familiar with the Skolian Empire will find much to like here. For those who aren’t, the Major Bhaajan books make a fine jumping-on point to this vast and convoluted universe.”—Analog

About the Major Bhaajan series:
“. . . riveting. . . . The world is rich and vivid, with two distinct cultures in the Undercity and the aboveground City of Cries. This exciting novel stands alone for anyone who enjoys science fiction adventure.”—Publishers Weekly (starred review)

"Asaro plants herself firmly into that grand SF tradition of future history franchises favored by luminaries like Heinlein, Asimov, Herbert, Anderson, Dickson, Niven, Cherryh, and Baxter . . . They don't write em like that anymore! Except Asaro does, with . . . up-to-the-minute savvy!"—Locus

"Baahjan, who starts out keeping an emotional distance from the people in the Undercity soon grows to think of them as her community once more. Asaro . . . returns to the Skolian empire's early history to tell Bhaajan's story."—Booklist

"Asaro delivers a tale rich with the embedded history of her world and bright with technical marvels. Her characters are engaging and intriguing and there is even a bit of romance. What really touched my heart was Bhaaj's interaction with the children of the aqueducts. I spent the last fifty pages of the book sniffling into a tissue."—SFcrowsnest

"I'm hooked, both on her writing and her Skolian universe. This book had everything I wanted: strong characters, a new and unique world, and a plot that isn't as simple as it first appears."—TerryTalk

About the Skolian Saga:
“Entertaining mix of hard SF and romance.”—Publishers Weekly

“Asaro’s Skolian saga is now nearly as long and in many ways as compelling as Dune, if not more so, featuring a multitude of stronger female characters.”—Booklist

Catherine Asaro has an M.A. in physics and a Ph.D. in chemical physics from Harvard. She has appeared as a speaker at many places, including Harvard and the National Academy of Sciences, and as a Guest of Honor at science fiction cons in the US and abroad. She is a member of SIGMA, a think tank that advises the government as to future trends. A former ballet and jazz dancer, and now a vocalist, Asaro has performed at clubs and conventions. She is the creator of the popular Skolian Empire Saga, a science fiction series that includes The Ruby Dice, Diamond Star, and Carnelians from Baen. Other books include near-future technothrillers Alpha and Sunrise Alley, also published by Baen Books. Asaro is a resident of East Setauket, Long Island.