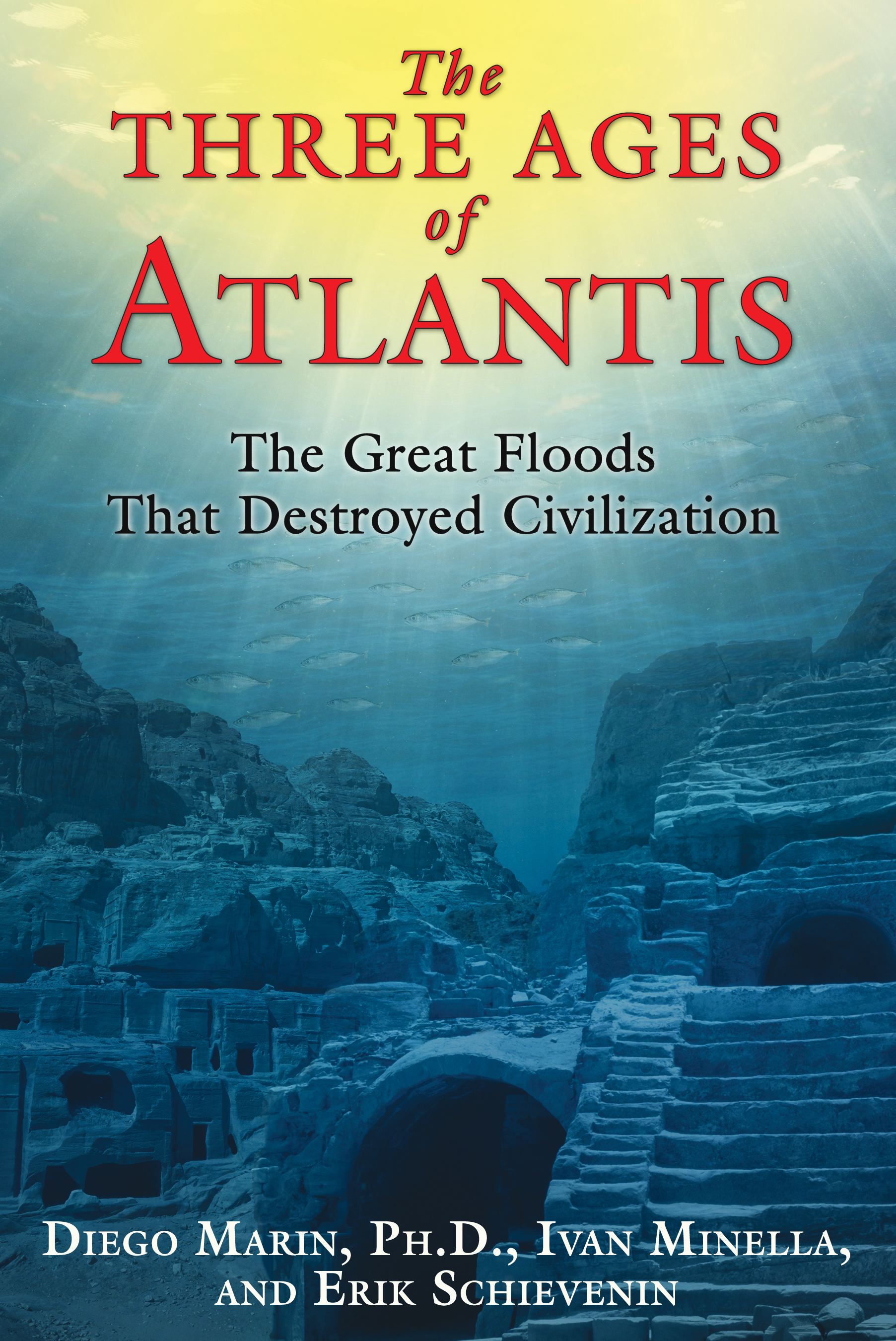 The Three Ages of Atlantis

The Great Floods That Destroyed Civilization

• Reveals that there was not one but three Atlantises--the first in Antarctica, the second in South America, and the third in the Mediterranean

• Shows how these flood dates directly parallel the freezing of Antarctica, the migrations of Cro-Magnon men, and the destruction of Atlantis according to Plato

15,000 years ago the Earth’s axis tilted, shifting the geographic poles. Volcanoes erupted, the icecaps melted, and the seas rose dramatically. Antarctica was enveloped in ice, destroying the high civilization of prehistory: Atlantis. But before the survivors could reestablish what they had lost, catastrophe struck again--twice.

Uniting scientific findings with theories on the location of Atlantis, the authors reveal that there was not one but three Atlantises--the first in Antarctica, the second in South America, and the third in the Mediterranean. Examining paleoclimatology data, they show that Antarctica was temperate 15,000 years ago and home to the original Atlantis. They explore geological evidence of three worldwide super-floods 15,000, 11,600, and 8,700 years ago and show how these dates directly parallel the freezing of Antarctica, the arrival of Cro-Magnon man in Europe, and the destruction of Atlantis according to Plato. Uncovering the influence of the Atlanteans in Proto-Indo-European languages and in massive ancient monuments aligned with the stars, they show how the civilization founders in all early myths--the Pelasgians, Danaans, Viracocha, Aryans, and others--were part of the Atlantean diaspora and how this migration split into two major movements, one to Latin America and the other to Europe and Asia.

Following the Atlanteans from a warm Antarctica up to Peru, Mexico, and the Mediterranean, they reveal that Cro-Magnon men are the people of Atlantis and that we are just now returning to their advanced levels of science, technology, and spirituality.

INTRODUCTION
Beyond the Mirror

Atlantis--the island of the Blessed, the home of the gods. There it was, where the oceans flow together, beyond the muddy shallows where the keels stopped and the cargo ships unloaded. There it was, in the middle of an island, on a mountaintop, designed in concentric circles that reproduced the celestial spheres, sinking its roots underground in deep tunnels extending beneath the sea.

Three times the raging waters broke against its walls covered with gold, silver, and obsidian, extracts of its natural mines. Three times it was destroyed and rebuilt in different places on Earth. Three times, three floods, starting 15,000 years ago (13,000 BCE), when the end of the last Ice Age wiped out 60% of Earth’s habitable land.

A meteorite, or perhaps a patchy accumulation of ice at the poles, was sufficient to destabilize our planet, a little rolling ball lost in space. The entire Earth’s crust slid beneath the surface layer, dragging along all the continents, one after another.

The old polar caps approached the equator and melted. The North Pole moved from Hudson Bay (Canada) and reached its current position, while the Antarctic, once a green paradise watered by rivers, became a cold desert of ice.

Earth’s inhabitants, the Cro-Magnon, had to hastily gather supplies and escape, while huge waves of melted ice, six hundred meters high and extending for hundreds of miles over land, were hurled against the continents. Entire regions would become arid due to the seasonal monsoon, while in the New World alone, seventy kinds of mammals became extinct. The water shifted its weight from the glaciers to the oceans, triggering terrible 8.9 Richter scale earthquakes and the eruption of all extinct volcanoes, whose ashes obscured the sky for decades. The human species was reduced to a few hundred thousand individuals.

This text aims to piece together the story of the first civilization that human memory recalls. Although enriched throughout centuries of fantastic and esoteric elements, its body of real events has been preserved and reveals what happened on Earth in the years following the last ice age, when civilizations were destroyed and humankind was brought back to the state of hunter-gatherer. Many think it is just a fairy tale, but one only needs to re-read history without prejudices to see the solid reality hidden in the myth.

The oldest civilizations tell of survivors from an earlier era who arrived in their territories in order to teach arts and sciences. Soon they were worshiped as gods. They were exiles who had escaped on their ships from the grip that had tightened Antarctica. They had many names including: Pelasgians, Danaes, Oceanides, Kindred, Vampires, Titans, Giants, Tyrrhenians, Cyclops, Shekelesh, Atlanteans, Italanteans, Arii, and Viracochas. We call them “Cro-Magnon”: lightskinned, with light-colored eyes and blond or red hair; they worshiped a single deity. They were masters in navigation, geography, astronomy, and architecture; they mapped the whole planet and built huge monuments throughout. We still come across their maps today, replicated by medieval copyists and exhibited in beautiful Renaissance villas and museum windows. Their temples run along the river banks and ocean coastlines, built with polished boulders weighing up to a thousand tons, brought from quarries that were hundreds of miles away, raised and aligned with systems that we fail to understand.

After the flood in 13,000 BCE their diaspora split in two directions, Latin America and Europe/Asia. They colonized the western Mediterranean--the Italian Tyrrhenian coast up to Sicily, Malta, and Algeria, and Egypt in the eastern Mediterranean. Their knowledge easily made them “masters” of the primitive peoples inhabiting those places. The mythical ruler of the eastern Mediterranean, known by such names as Minos and Osiris, signaled the advent of a Second Empire for the Atlanteans. Later this empire stretched even further, to India. A region of this vast empire went down in history as “Hyperborea.” The Po River, then known as Eridanus, ran through it, extending from the Alps to Tuscany.

The empire lasted almost three thousand years, until 9,600 BCE. During this long period some huge lakes had been trapped in thin ice dams. When these broke--with incredibly perfect timing--a catastrophe took place just as it had in 13,000 BCE. Once again, both Europe and the Americas were hit by floods and earthquakes. Everything was lost.

The Earth shook again in 6,700 BCE. The last dams collapsed and the last lakes emptied. Humankind regressed to the state of a gatherer and millennia passed before man was able to regain functioning farming and breeding, the techniques for building houses and cities, and organization of public life.

The chapters of this book will trace a map of the monuments and traditions--arts, myths, religions--that the ancient peoples inherited from the Atlantians, revealing connections that show a common cultural origin.

The footsteps of the Cro-Magnons will lead us from the Mediterranean to the Indus River Valley: here their community lived “displaced,” carried so far by migration disguised as the Eastern military campaign in the myth of Osiris or Minos. We will follow this god’s footsteps, his long march that was the inspiration for the dreams of conquest of Alexander the Great.With the passing of the years, the language and ethnicity of the “Asian colony” will take on the specific traits that we call Indo-European.

We will see the Indo-Europeans returning to Europe 4,000 and 5,000 years before Christ, approaching the Middle East in 2,600 BCE at the head of the nomadic people of Gutei, causing the collapse of the Akkadian empire.

We will meet them again when, fleeing from the guerrillas of a Sumerian king, they will cross the sea and establish themselves on the Mediterranean coast that once belonged to their ancestors. They are called the Peoples of the Sea.
Diego Marin

Diego Marin, Ph.D., has a doctorate in theoretical physics and has extensively studied the comparative mythology, esoteric traditions, and history of the Near and Middle East. A cofounder of the Pangea Cultural Association, he lives in Italy.

Ivan Minella is an archaeologist specializing in European protohistory, archaeometallurgy, and remote sensing. He has made excavations in Burkina Faso, Festos in Crete, and in Sardinia. A cofounder of the Pangea Cultural Association, he lives in Italy.

Erik Schievenin is a geologist specializing in erosions and fracture lines whose research has led to a controversial re-dating of the Sphinx and several megalithic temples. A cofounder of the Pangea Cultural Association, he lives in Italy.

“Diego Marin is a physicist who has spent many years in his quest for ‘Atlantis.’ His book is a well-researched and stimulating piece of detective work as well as a great read for all the devotees of this intriguing topic.”

– Robert Bauval, author of The Orion Mystery, Black Genesis, and Breaking the Mirror of Heaven

The Three Ages of Atlantis

The Great Floods That Destroyed Civilization