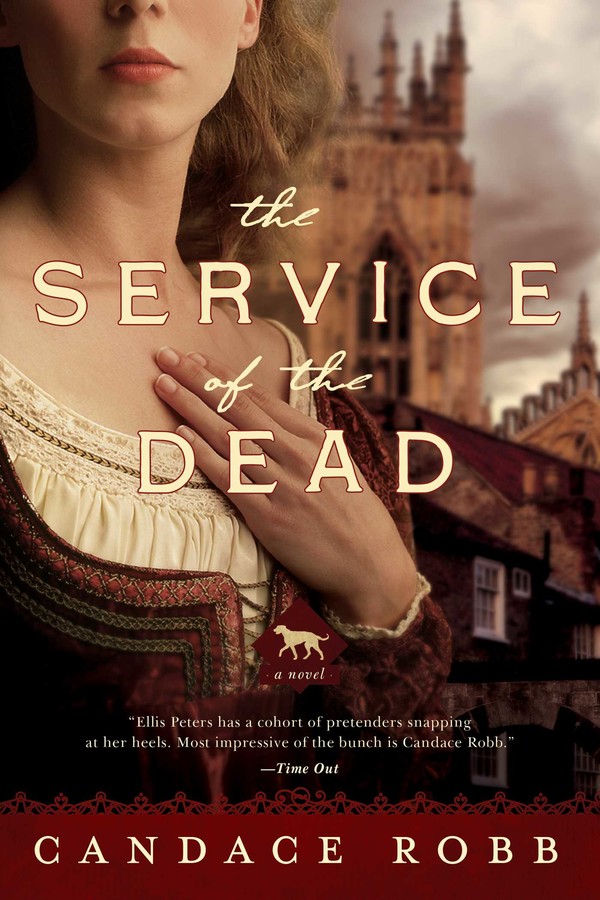 By Candace Robb
LIST PRICE $13.99
PRICE MAY VARY BY RETAILER

Political unrest permeates York at the cusp of the fifteenth century, as warring factions take sides on who should be the rightful king--Richard II or his estranged, powerful cousin in exile, Henry Bolingbroke. Independent minded twenty-year-old Kate Clifford is struggling to dig out from beneath the debt left by her late husband. Determined to find a way to be secure in her own wealth and establish her independence in a male dominated society, Kate turns one of her properties near the minster into a guest house and sets up a business. In a dance of power, she also quietly rents the discreet bedchambers to the wealthy, powerful merchants of York for nights with their mistresses.But the brutal murder of a mysterious guest and the disappearance of his companion for the evening threatens all that Kate has built. Before others in town hear word of a looming scandal, she must call upon all of her hard-won survival skills to save herself from ruin.

Candace Robb is the bestselling author of 13 crime novels set in 14th century England, Wales, and Scotland, including the acclaimed Owen Archer series and the Margaret Kerr trilogy. Writing as Emma Campion, Candace has published historical novels about two fascinating women she encountered while researching the Owen Archer mysteries: Alice Perrers (The King's Mistress) and Joan of Kent (A Triple Knot). Candace lives in Seattle, Washington.

"Kate Clifford is a wonderful creation, hard-nosed in some respects, compassionate and caring on the other. I look forward to the next installment of this delightful series!"

"A historical novel that deftly captures politics and interactions between different social interests in late medieval England…against the backdrop of social pressures and military actions, Kate’s character and world shine and draw readers into her choices and challenges."

"Candace Robb was part of the wave of historical writers in the early 90s that included Sharan Newman and Margaret Frazer; clear descendants of Ellis Peters, all of them bringing a scholarly take to their writing while also supplying excellent stories and characters. It’s wonderful to have a new novel and character to cherish from this talented writer."

"The novel resonates with its compelling portrayal of an England on the brink of crisis."

"Kate Clifford enchants us from the instant we break open Candace Robb's The Service of the Dead, with its crackling frisson of violence and mayhem. Richly weaving a tapestry of intrigue and violence, Robb masterfully creates a world set in a time of regal intrigue. A doughty widow, determined to establish financial independence and society security, Kate and her emotional depth resonate profoundly with the reader. This dazzling work highlights Robb's deft skills as a chronicler of times that echo in all too timely ways with our own."

"Candace Robb has created another wonderful, strong character in Kate Clifford, a widow of York. Brought up in the border wars of Scotland, Kate is tough but also knows the grief of sudden death. When a body is found in her guest house, she fears that the English struggle between King Richard II and his cousin Henry has reached her town and family. Kate is aided in her search for answers by her unusual household, including the bastard children of her late husband. With plot twists as tangled and unexpected as the streets of medieval York, this gritty story kept me enthralled and guessing up to the end. Robb’s thorough knowledge of the time and place brings a texture to her portrayal of York that brings the reader into Kate’s life as if transported through time."

"Who to trust in a world of treachery, when the wrong decision can end in death? At the end of the 14th century, as young widow Kate Clifford is determined to survive and prosper in a man's world on her own skills, she has no choice but to solve a murder that could split the kingdom and spell her ruin. Candace Robb gives us a plot with serpentine twists and turns, and in Clifford she's created a powerful but compassionate heroine, with her rag-tag, loyal and deadly family around her. Historical crime that's not for the faint-hearted."

– Chris Nickson, author of the Richard Nottingham and the Tom Harper novels

"The Service of the Dead is a tasty brew of political intrigue, larceny, and murder set within the walls of medieval York. Candace Robb’s latest historical mystery is steeped in the atmosphere of the late fourteenth century, and in Kate Clifford she’s given us a no-nonsense heroine and sleuth who is not only smart, but fierce when those she cares about are threatened. You’re going to love her."

– Patricia Bracewell, author of the Emma of Normandy Trilogy

"The Service of the Dead by Candace Robb is a strikingly well-crafted novel that is a compelling page-turner from beginning to end. Very highly recommended for community library historical fiction collections."

By Candace Robb
LIST PRICE $13.99
PRICE MAY VARY BY RETAILER