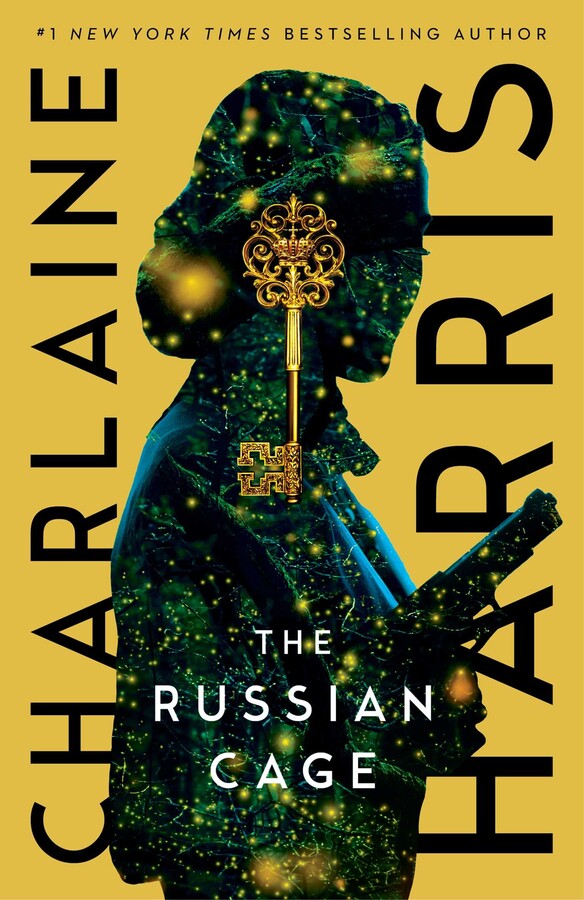 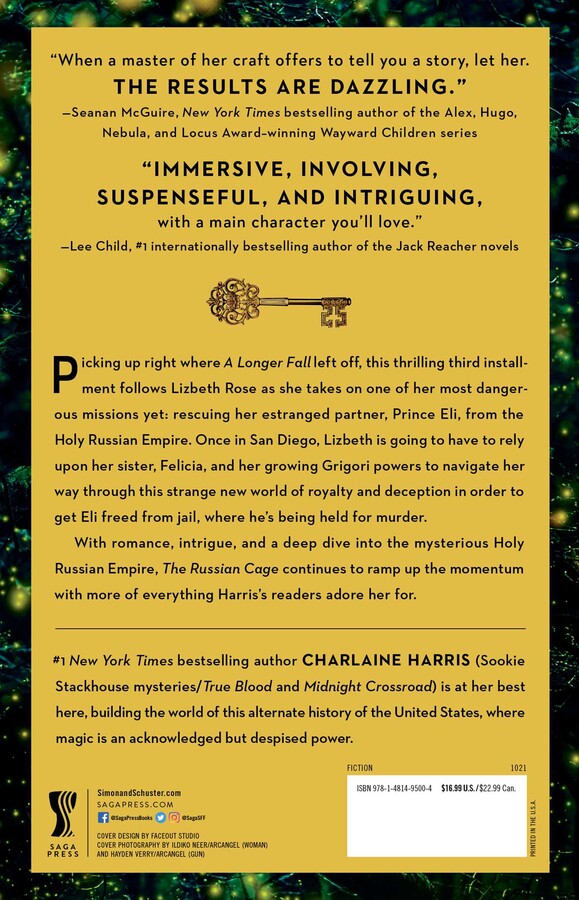 #1 New York Times and USA TODAY bestselling author Charlaine Harris is at her best in this alternate history of the United States where magic is an acknowledged but despised power in this third installment of the Gunnie Rose series.

Picking up right where A Longer Fall left off, this thrilling third installment follows Lizbeth Rose as she takes on one of her most dangerous missions yet: rescuing her estranged partner, Prince Eli, from the Holy Russian Empire. Once in San Diego, Lizbeth is going to have to rely upon her sister Felicia, and her growing Grigori powers to navigate her way through this strange new world of royalty and deception in order to get Eli freed from jail where he’s being held for murder.

Russian Cage continues to ramp up the momentum with more of everything Harris’ readers adore her for with romance, intrigue, and a deep dive into the mysterious Holy Russian Empire.

Chapter One CHAPTER ONE
I sat at the table in my cabin, my sister’s letter in my hand, and read it for the third time. After that, it was hard to sit still. Part of my head was making a list of the things I had to do now. The other part still couldn’t believe Felicia’s message. I’d gotten a letter from her right after Christmas, a thank-you note for the deerskin jacket I’d sent her. Getting another letter this soon after the first one had been a surprise. As I’d walked out of the Segundo Mexia post office, I’d stuffed it in my pocket, figuring it was full of chatter about what the students had done for the rest of the holiday. Holy Russian stuff.

I hadn’t felt any need to hurry back up the hill to my cabin, and I’d put away my groceries before I’d opened Felicia’s letter.

Dear Sister, Felicia began. Thanks so much for the warm jacket. It is eligant!

Right away a bell had started ringing.

From eleven-year-old Felicia’s very first letter to me, every word had been spelled correctly (her handwriting had steadily improved, too). Her whole class had to write letters home at least once a month—at least, those who had homes—and they had to keep a dictionary beside them while they wrote.

Felicia had underlined the misspelled word. Just in case I didn’t notice.

Too bad I can’t use it now. It was lovely and warm. I know you spent a lot of time with it. It’s stored away in a box until you can repair it.

With it. Not working on it. She’d had to put away her deerskin jacket? Why? I knew winters weren’t really cold in San Diego, but surely a jacket…?

I wish you were closer, so we could talk face-to-face. Maybe you could visit. Let me know! I remember when I met you in Mexico, and you sent me here to the HRE. That was a great day with good companions.

I hope you’re well and you feel like traveling again soon. Your sister Felicia

I hadn’t spent much time with my sister—hardly any, in fact. But I knew some things about her. Not only was she smart, she was devious.

Felicia expected me to figure this out.

All right, working backward. The “good companions” we’d had on the train platform in Ciudad Juárez were Klementina and Eli, both wizards from the Holy Russian Empire. Eli had been on a mission to find descendants of Grigori Rasputin, since Rasputin had died. The wizard’s blood had been keeping Tsar Alexei alive. Felicia was Rasputin’s granddaughter by one of his bastards. Klementina, ancient and powerful, had come to check on Eli’s progress. She wasn’t the only one.

A group of grigoris who wanted to topple the tsar had shown up to stop Felicia from reaching him.

So that left Eli. Eligant. Felicia was telling me that she couldn’t see Eli any longer. That now he was in a box. She couldn’t mean a coffin; I could “repair” it.

I stared at the letter for at least three minutes before I understood.

Eli was in prison.

Felicia hoped I could get Eli out. She wanted me to come bust him out of a cell. My mind raced ahead, much as I told myself to slow down.

I’d have to take a train, probably several trains. I needed to go to my mom’s house and fish my money out of the hidden hole in the wall in my old room. I hoped I’d have enough. I actually rocked on my feet, torn between running back to town to visit my mother and Jackson and packing my stuff here and telling my nearest neighbor, Chrissie, I’d be gone for a while.

In the back of my head, I knew the smartest thing to do was to sit tight. Eli was resourceful; he could get out of this dilemma by himself.

But I knew I wouldn’t do that.

Charlaine Harris is a New York Times bestselling author who has been writing for over thirty years. She was born and raised in the Mississippi River Delta area. She has written four series, and two stand-alone novels, in addition to numerous short stories, novellas, and graphic novels (cowritten with Christopher Golden). Her Sookie Stackhouse books have appeared in twenty-five different languages and on many bestseller lists. They’re also the basis of the HBO series True Blood. Harris now lives in Texas, and when she is not writing her own books, she reads omnivorously. Her house is full of rescue dogs.

"There is rarely a dull moment. Fans of Harris’s daring heroine will be pleased to accompany her on her latest adventure.”—Publishers Weekly

“An entertaining addition to a consistently fun series.” —Kirkus