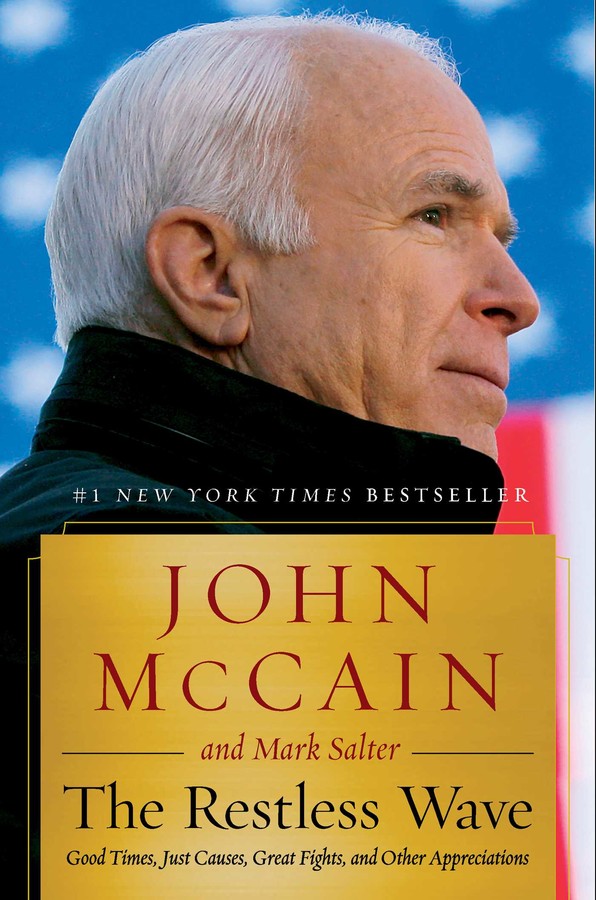 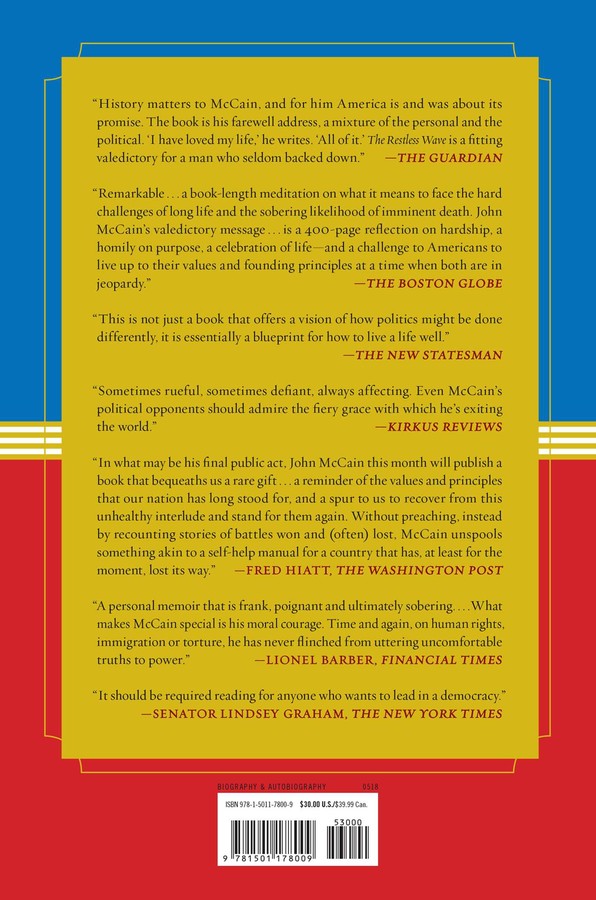 In this candid new political memoir from Senator John McCain, an American hero reflects on his life—and what matters most.

“I don’t know how much longer I’ll be here. Maybe I’ll have another five years. Maybe, with the advances in oncology, they’ll find new treatments for my cancer that will extend my life. Maybe I’ll be gone before you read this. My predicament is, well, rather unpredictable. But I’m prepared for either contingency, or at least I’m getting prepared. I have some things I’d like to take care of first, some work that needs finishing, and some people I need to see. And I want to talk to my fellow Americans a little more if I may.”

So writes John McCain in this inspiring, moving, frank, and deeply personal memoir. Written while confronting a mortal illness, McCain looks back with appreciation on his years in the Senate, his historic 2008 campaign for the presidency against Barack Obama, and his crusades on behalf of democracy and human rights in Eastern Europe and the Middle East.

Always the fighter, McCain attacks the “spurious nationalism” and political polarization afflicting American policy. He makes an impassioned case for democratic internationalism and bi-partisanship. He tells stories of his most satisfying moments of public service, including his work with another giant of the Senate, Edward M. Kennedy. Senator McCain recalls his disagreements with several presidents, and minces no words in his objections to some of President Trump’s statements and policies. At the same time, he offers a positive vision of America that looks beyond the Trump presidency.

The Restless Wave is John McCain at his best. 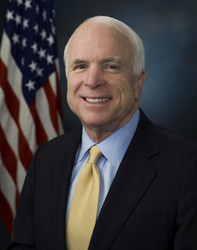 Photograph by the office of Senator McCain
John McCain

Senator John McCain (1936—2018) entered the Naval Academy in June of 1954. He served in the United States Navy until 1981. He was elected to the US House of Representatives from Arizona in 1982 and to the Senate in 1986. He was the Republican Party’s nominee for president in the 2008 election. He is the author of Faith of My Fathers, Worth Fighting For, Why Courage Matters, Character Is Destiny, Thirteen Soldiers, and The Restless Wave.

Mark Salter has collaborated with John McCain on all seven of their books, including The Restless Wave, Faith of My Fathers, Worth the Fighting For, Why Courage Matters, Character Is Destiny, Hard Call, and Thirteen Soldiers. He served on Senator McCain’s staff for eighteen years.

“Senator Lindsey Graham once described his friend John McCain as someone who would ‘run across the street to get in a good fight.’ McCain’s final battle came straight to him. I’m not talking about the one against brain cancer…I’m talking about the one against Donald Trump. He wages it in a forthcoming book, The Restless Wave...McCain has always believed, to his core, in sacrifice, honor and allegiance to something larger than oneself…Such grace is unimaginable from Trump. That’s why it’s so vital that McCain is using his waning time to model it.” —Frank Bruni, The New York Times

"You can see McCain in this book struggling to reconcile himself to what his Republican Party has largely become…The six-term senator from Arizona slips in a few careful mentions of Donald J. Trump, and expresses concern about the rancor that has overtaken the country…He consistently returns again and again to what seems for him to be a core commitment: a fervent belief in American exceptionalism...his faith in his country’s beneficence remains undimmed." —Jennifer Szalai, The New York Times

"In what may be his final public act, John McCain this month will publish a book that bequeaths us a rare gift....the volume does not burden us with a lot of high-minded advice based on lessons learned, nor does it pull us down into treacly memoir. McCain is still very much McCain....What he does offer, though, at this peculiar moment of our history, is far more precious: a reminder of the values and principles that our nation has long stood for, and a spur to us to recover from this unhealthy interlude and stand for them again. Without preaching, instead by recounting stories of battles won and (often) lost, McCain unspools something akin to a self-help manual for a country that has, at least for the moment, lost its way." —Fred Hiatt, The Washington Post

“It should be required reading for anyone who wants to lead in a democracy.” —Senator Lindsey Graham, The New York Times

“History matters to McCain, and for him America is and was about its promise. The book is his farewell address, a mixture of the personal and the political. 'I have loved my life,' he writes. 'All of it.' The Restless Wave is a fitting valedictory for a man who seldom backed down.” —The Guardian, US

"Remarkable....a book-length meditation on what it means to face the hard challenges of long life and the sobering likelihood of imminent death. John McCain’s valedictory message, at the booksellers under the title The Restless Wave, is a 400-page reflection on hardship, a homily on purpose, a celebration of life — and a challenge to Americans to live up to their values and founding principles at a time when both are in jeopardy." —The Boston Globe

"This is not just a book that offers a vision of how politics might be done differently, it is essentially a blueprint for how to live a life well." —The New Statesman

“In this thoughtful valedictory, [McCain] delivers…Unlike the previous six books McCain and Salter have composed together, this one wasn’t written for voters. It was written for history…With what time he has left, the “maverick” — an appellation he has worn throughout his career, at some times more comfortably than at others — is going to put country first and tell the truth…His book will be remembered for its genuine concern about the future of our republic and the West.” —James Hohmann, The Washington Post

"McCain’s The Restless Wave coalesces a series of poignant and striking warnings of the perils facing the United States, from Russian aggression worldwide to an escalated American divide and partisanship fights to isolationist efforts and racism…He also expresses a theme of gratitude for living a life larger than he envisioned." —Stars and Stripes

“Written in McCain’s plain-spoken, occasionally brusque manner, the senator and Vietnam war veteran…offers a wide-ranging appraisal of his own career, one marked by unrealized presidential ambitions and a lofty view of America on the international stage.” —The Guardian

“John McCain always said he’d go down fighting, and so he has…McCain became, throughout his career, the embodiment of the noble nonconformist on the Hill, the politician who was all too willing to sacrifice party loyalty to do what he thought was right for the country, to do so loudly and consistently, and to fearlessly pronounce everyone, including the occupant of the Oval Office, dead wrong if they disagreed with him. Over nearly four decades in Washington, McCain has given a master class in maverickism, and it is for this he will be most remembered. So it is fitting, perhaps that the inveterate fighter is taking on Trump—another Republican politician who rose by bucking GOP orthodoxy—in his final battle, and bequeathing to the nation a bookful of advice on how to be the right kind of maverick.” —Politico

“It is clear McCain wants this book—sure to be his last—to be a guide for standing up for oppressed people around the globe, as he has done for decades.” —CNN

“Republican Senator John McCain is known as a maverick, familiar with tough fights, from prison camps in Vietnam to the floor of the U.S. Senate. Recently, he has been staying close to the Arizona ranch he calls home, as he undergoes treatment for brain cancer…but he still speaks his mind…[In The Restless Wave] there are reflections about living and past decisions, but it also makes clear that McCain still has plenty to say about America, American society, and politics in the age of President Trump.” —PBS NewsHour

"The Restless Wave is the seventh and final book McCain has written with longtime collaborator Mark Salter. Focused on his past 20 years of public life and a few major topics, it's McCain on McCain, even more uncensored than usual. Which makes it fun, no matter your politics." —New York Daily News

"It is rich in his beliefs on a number of subjects critical to America....He has a particular gift for illustrating his points with stories of a wide variety of people whom he has encountered, at home and abroad....Mr. McCain as a politician was positive and irascible, an interesting combination. His well-known disposition toward 'straight talk' is evident throughout the book....America will miss this man in our public life. This book makes it very clear why." —Pittsburgh Post-Gazette

"If you haven't gotten the book, it is really worth getting. You don't need to agree politically, but as an American and as a human being, I think this is a book everybody should read." —Whoopi Goldberg, The View

“An elegiac memoir… the maverick Republican senator from Arizona has produced a personal memoir that is frank, poignant and ultimately a sobering commentary about the state of American democracy and world leadership.” —The Financial Times

"Moving....Rather than a response to extraordinary times, this fine memoir reads more like a requiem of a long, patriotic life." —Publishers Weekly Online

"This is a very different look back at a remarkable life and career....McCain and Salter’s book is definitely worth reading; in fact, it’s one that I wish every member of Congress and staffer would read. His vantage point on what has happened in politics and in Congress, through the eyes of someone who has lived through what he has, makes it all the more worthwhile." —National Journal

"Even if you had never heard of John McCain, reading The Restless Wave would make you want to pick him for your team." —VVA Veteran