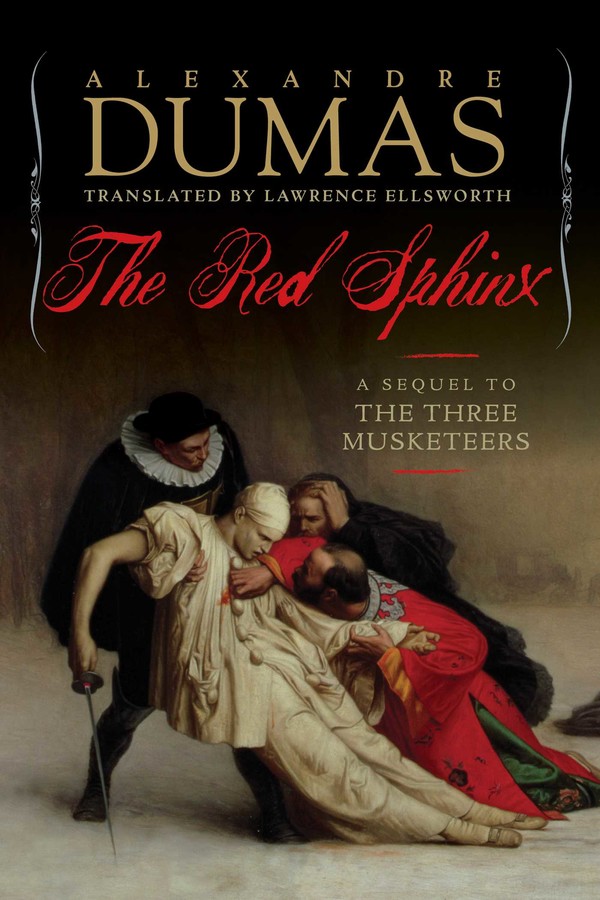 By Alexandre Dumas
LIST PRICE $13.99
PRICE MAY VARY BY RETAILER

In 1844, Alexandre Dumas published The Three Musketeers, a novel so famous and still so popular today that it scarcely needs introduction. Shortly thereafter he wrote a sequel, Twenty Years After. Later, toward the end of his career, Dumas wrote The Red Sphinx, another direct sequel to The Three Musketeers that begins a mere twenty days afterward. Picking up right where the The Three Musketeers left off, The Red Sphinx continues the stories of Cardinal Richelieu, Queen Anne, and King Louis XIII—and introduces a charming new hero, the Comte de Moret, a real historical figure from the period. Dumas wrote seventy-five chapters of The Red Sphinx, but never quite finished it and the novel languished for almost a century. While Dumas never completed the book, he had earlier written a separate novella, The Dove, that recounts the final adventures of Moret and Cardinal Richelieu.Now for the first time in one cohesive narrative, The Red Sphinx and The Dove make a complete and satisfying storyline—a rip-roaring novel of historical adventure, heretofore unknown to English-language readers, by the great Alexandre Dumas, king of the swashbucklers.

One of the most famous French writers of the nineteenth century, Alexandre Dumas (1802–1870) first achieved success in the literary world a playwright, before turning his hand to writing novels. In two years from 1844 to 1845, he published two enormous books, The Count of Monte Cristo and The Three Musketeers. Both novels have sold millions of copies worldwide.

"As far as I can tell, Lawrence Ellsworth is responsible for one of the biggest literary projects happening right now in the English language. Ellsworth is working on a massive and daunting scale. He’s translating the entirety of Alexandre Dumas’s stories of The Three Musketeers (1844), all 1.5 million words of it. The third volume, Twenty Years After, appeared late last year. In Ellsworth’s hands, these stories of swashbuckling and all-for-one-and-one-for-all friendship feel new again. The Three Musketeers is an enormously entertaining tale for the ages."

"The Red Sphinx is a vivid and beautifully-crafted story dense with colorful characters and an irresistible charm."

By Alexandre Dumas
LIST PRICE $13.99
PRICE MAY VARY BY RETAILER