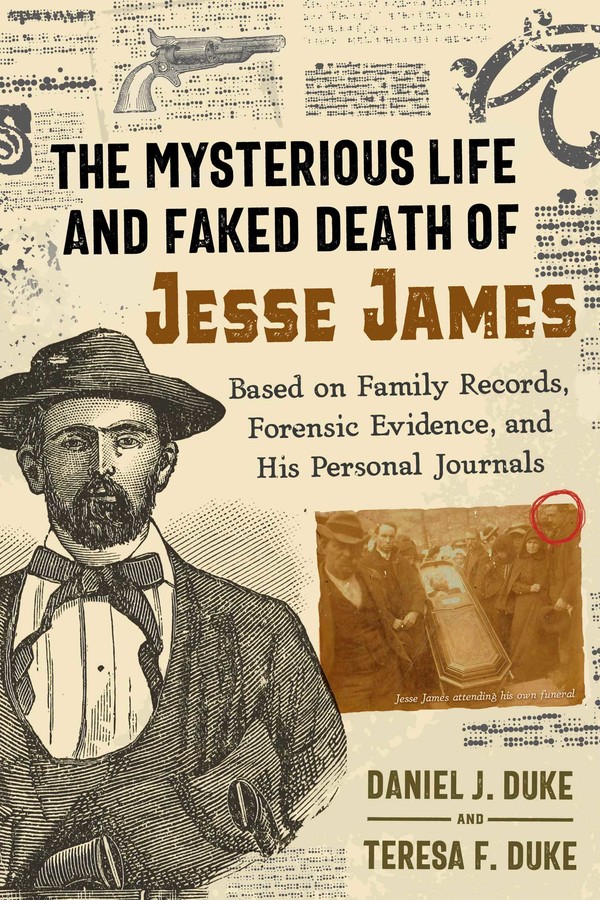 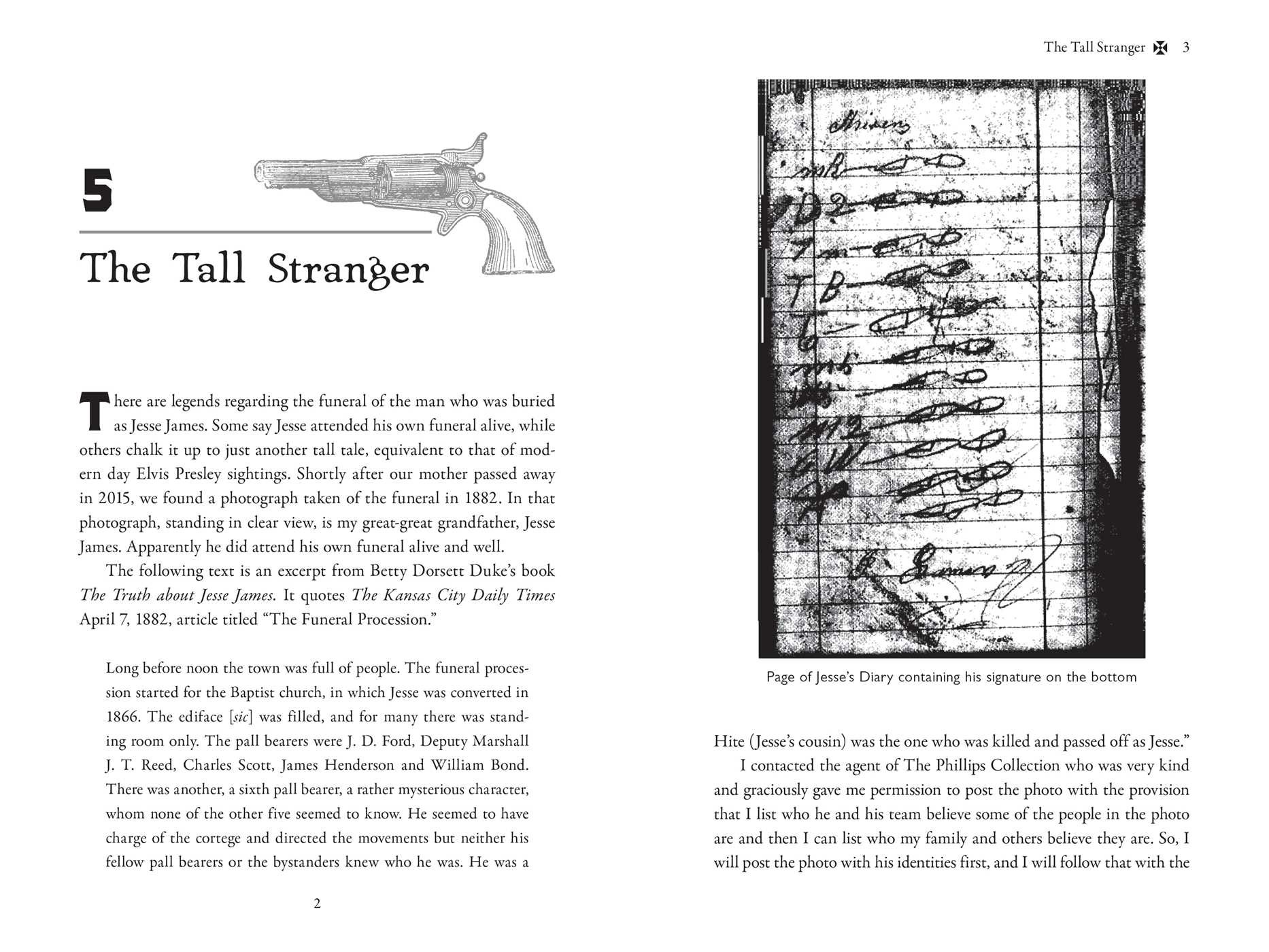 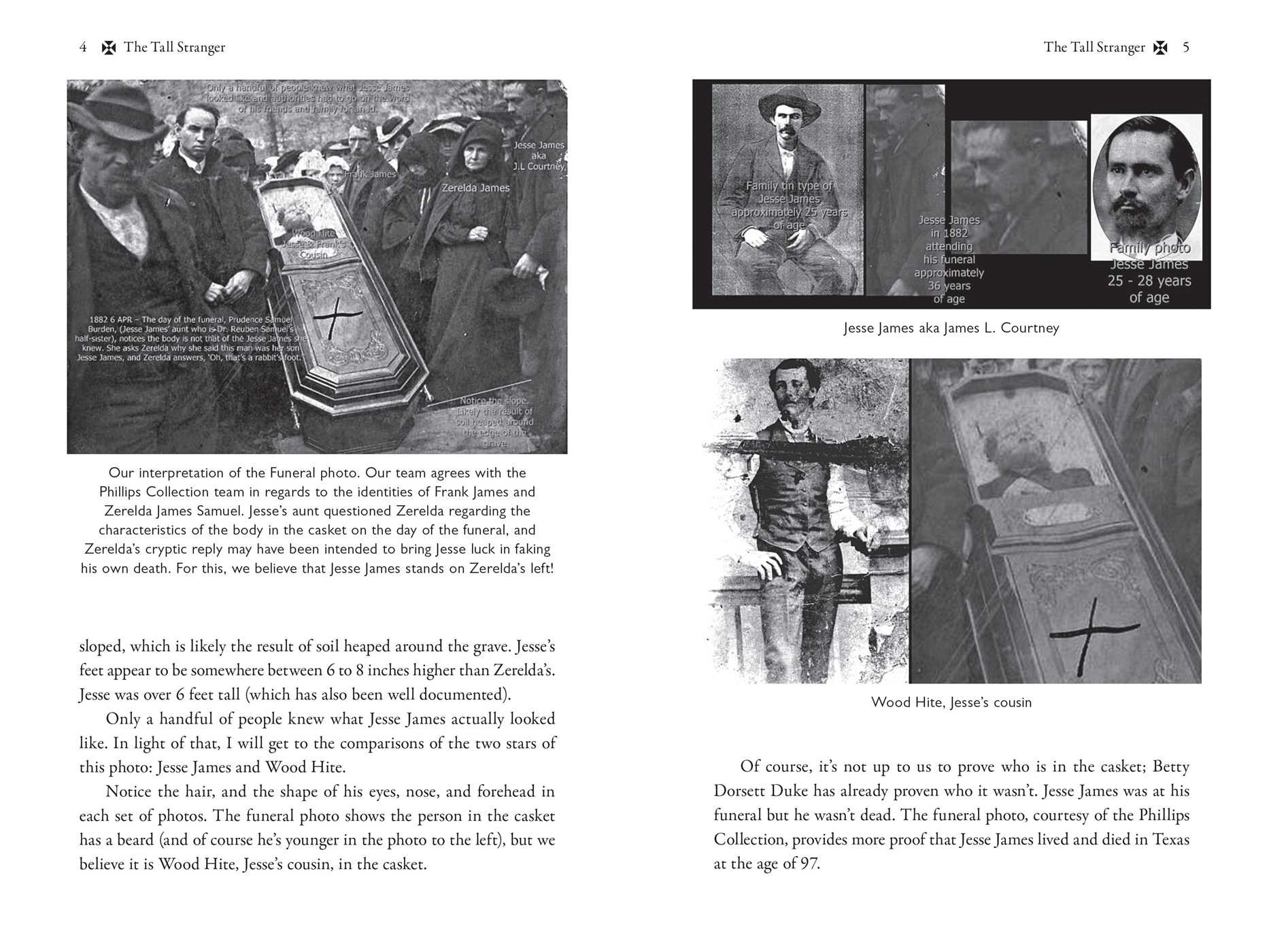 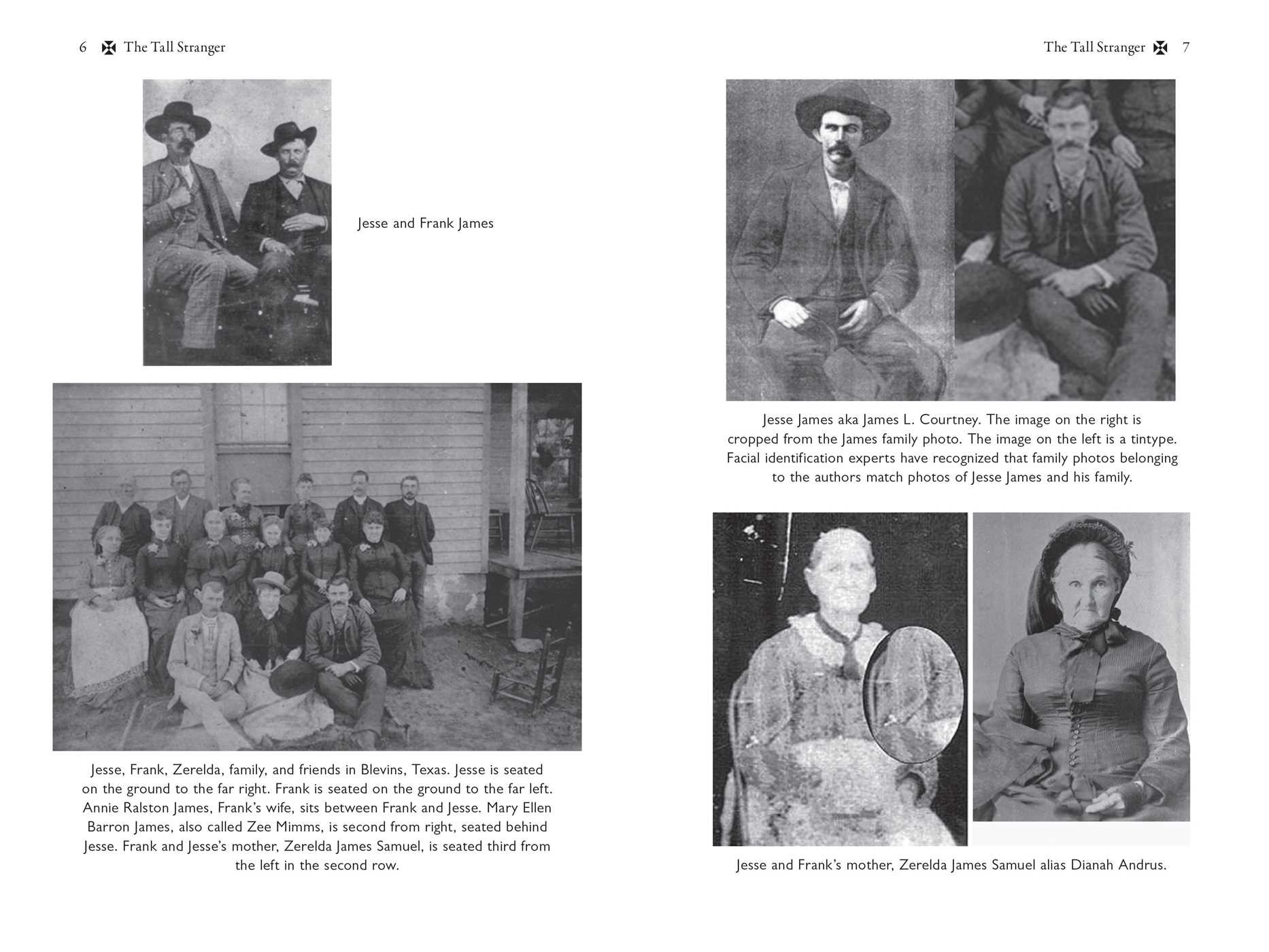 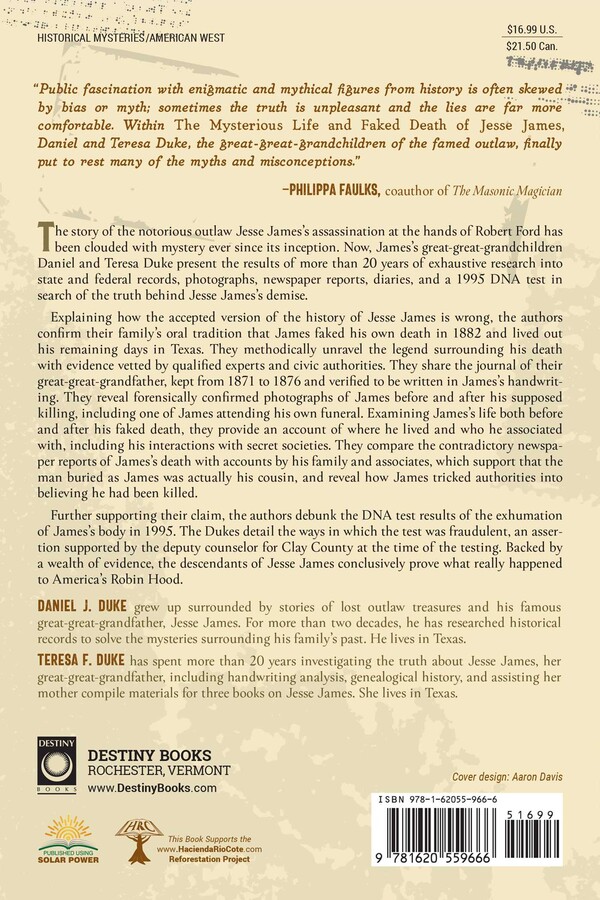 • Presents the legend of Jesse James and counters it with the real story, based on family records

• Provides photographic evidence, a journal of Jesse James’s, and historical records that prove James faked his death, verified by experts and civic authorities

The story of the notorious outlaw Jesse James’s assassination at the hands of Robert Ford has been clouded with mystery ever since its inception. Now, James’s great-great-grandchildren Daniel and Teresa Duke present the results of more than 20 years of exhaustive research into state and federal records, photographs, newspaper reports, diaries, and a 1995 DNA test in search of the truth behind Jesse James’s demise.

Explaining how the accepted version of the history of Jesse James is wrong, the authors confirm their family’s oral tradition that James faked his own death in 1882 and lived out his remaining days in Texas. They methodically unravel the legend surrounding his death, with evidence vetted by qualified experts and civic authorities. They share the journal of their great-great-grandfather, kept from 1871 to 1876 and verified to be written in James’s handwriting. They reveal forensically confirmed photographs of James before and after his supposed killing, including one of James attending his own funeral. Examining James’s life both before and after his faked death, they provide an account of where he lived and who he associated with, including his interactions with secret societies. They compare the contradictory newspaper reports of James’s death with accounts by his family and associates, which support that the man buried as James was actually his cousin, and reveal how James tricked authorities into believing he had been killed.

Further supporting their claim, the authors debunk the DNA test results of the exhumation of James’s body in 1995. The Dukes detail the ways in which the test was fraudulent, an assertion supported by the deputy counselor for Clay County at the time of the testing. Backed by a wealth of evidence, the descendants of Jesse James conclusively prove what really happened to America’s Robin Hood.

From Chapter 1. A Legend Is Born

Jesse James is a name recognized to this day by more people around the world than many other United States historical figures. Much of that is due, in our opinion, to the perfect combination of fact and myth. Jesse James was an outlaw to most, a hero to others, and to some, a terrorist. He has been the subject of Hollywood movies and scores of books. Jesse James, for better or worse, has captured the minds of the public around the world and holds them to this day, captivated at just the sound of his name.

How is it that a man, branded an outlaw could have had such a great impact on the minds of people around the globe for well over a century? Some say that so many people think of Jesse James as a folk hero because “Jesse James represents every man who ever felt the boot of the Man on his neck.” We also believe a large part of it has to do with a need for closure. Most people like to know what really happened. It doesn’t matter if the story relates to a good person or a bad person, a hero, outlaw, celebrity, or any public figure. Mystery is nice, but people like answers. They want the whole story and until they get an answer that satisfies them, they won’t be satisfied, and neither will we.

For as long as she could remember our late mother, Betty Dorsett Duke, had heard family stories that her paternal great-grandfather was really Jesse James. Her cousins had heard the same stories. The story goes that Jesse James left Missouri for Texas in 1871 using the alias of James Lafayette Courtney. The saddlebags on the horse he was riding and the one he was leading were full of gold. By October 31st he had married Mary Ellen Barron, daughter of Texas Ranger Captain Thomas Hudson Barron and settled down on a farm in Blevins, Falls County, Texas, which he purchased from his father-in-law, Captain Barron, with gold. He and Mary Ellen eventually had eight children, two boys and six girls, one of whom was Ida Florence “Courtney,” our great-grandmother.

Jesse James portrayed himself as James L. Courtney, an ex-Union Soldier who came to Texas after the Civil War and became an ordinary farmer. He was anything but ordinary. Ordinary farmers at that time didn’t travel around with sacks full of gold. Gold was scarce in those days and even more so for ordinary farmers. Some of the evidence from family, people who knew Jesse, and records, which we will investigate in this book, are as follows:

In 1874 he paid “Eight-hundred (gold) dollars” for a 160 acre tract of land that he purchased from Thomas Hudson Barron.

Our grandfather, his siblings, and my great-great-grandfather’s old neighbors said he was extremely cautious. When someone would ride up to his house after dark, he would blow out all the coal-oil lanterns and lie down across the doorway with his pistols cocked. He was never further than arm’s reach from a gun.

He had gold and silver buried in different locations and drew maps with symbols and coded messages documenting their location.

The late George Roming of El Paso, Texas, saw around twenty ingots of gold weighing fifteen to twenty pounds each stacked on a shelf in his barn.
Our great-great-grandfather and a group of men buried 680 ingots of gold.

He had five-gallon buckets of silver dollars sitting around his house.

Money was stored in the outhouse.

He made his son Byron C. Courtney Sr. count them each and every day.

He had thirteen five-gallon lard cans full of gold coins.

He and his associates “sailed through the Great Depression” because they had plenty of money.

He purchased large farms for each of his eight children when they were married.

Later in his life he owned Ford automobiles, and when any minor thing would go wrong with one of them he got a new one.

His shooting prowess was legendary--he could shoot the head off of a chicken while riding his horse at a dead run.

Our great-great-grandfather’s personal diaries also offer clues that he was not James L. Courtney the Union soldier: He named two of his horses “John” and “Reb”. “Johnny Reb” is a term used to describe a Confederate soldier. He named another horse “Copperhead.” Copperhead was a term used to identify members of the Knights of the Golden Circle, a pre–Civil War, pro-Southern secret society founded in Ohio in 1854 by George W. L. Bickley, a Virginian, who soon moved the KGC to the South. Members were known as Copperheads. Many claim the James Gang was the military arm of the KGC.

His diaries show that he consorted with known members of the James Gang including Bud Singleton, Bill Wilkerson, Thompson “Tom” McDaniels, and Jim Cummings aka Jim Clark.

And most striking: He signed his diary J. James and J W J.
Daniel J. Duke

Daniel Duke, the great-great-grandson of Jesse James, grew up surrounded by stories of lost outlaw treasures. For more than two decades he has researched the mysteries involving his family, Freemasonry, and the Knights Templar. He lives in Texas.

Teresa F. Duke has spent more than 20 years investigating the truth about Jesse James, her great-great-grandfather, including handwriting analysis, genealogical history, and assisting her mother compile materials for three books on Jesse James. She lives in Texas.

“Public fascination with enigmatic and mythical figures from history is often skewed by bias or myth; sometimes the truth is unpleasant and the lies are far more comfortable. Within The Mysterious Life and Faked Death of Jesse James, Daniel and Teresa Duke, the great-great-grandchildren of the famed outlaw, finally put to rest many of the myths and misconceptions. The book is a testimony to the tireless research of their mother, Betty Dorsett Duke, to find out the truth about her ancestor, which was sadly cut short by her untimely death. Daniel and Teresa have continued her legacy, and it is one that she--and Jesse--would no doubt be proud of.”

“Drawing on more than 20 years of research, Daniel and Teresa Duke expound upon the family lore, Jesse’s diaries, and legal documents to disprove the misconception that their great-great-grandfather died in 1882 and instead reveal that he lived for another 40 years in Texas under a different name, remaining unapologetic about his outlaw days. They give us the details of Jesse’s ‘lost years’ and what about Jesse remains elusive to modern science.”