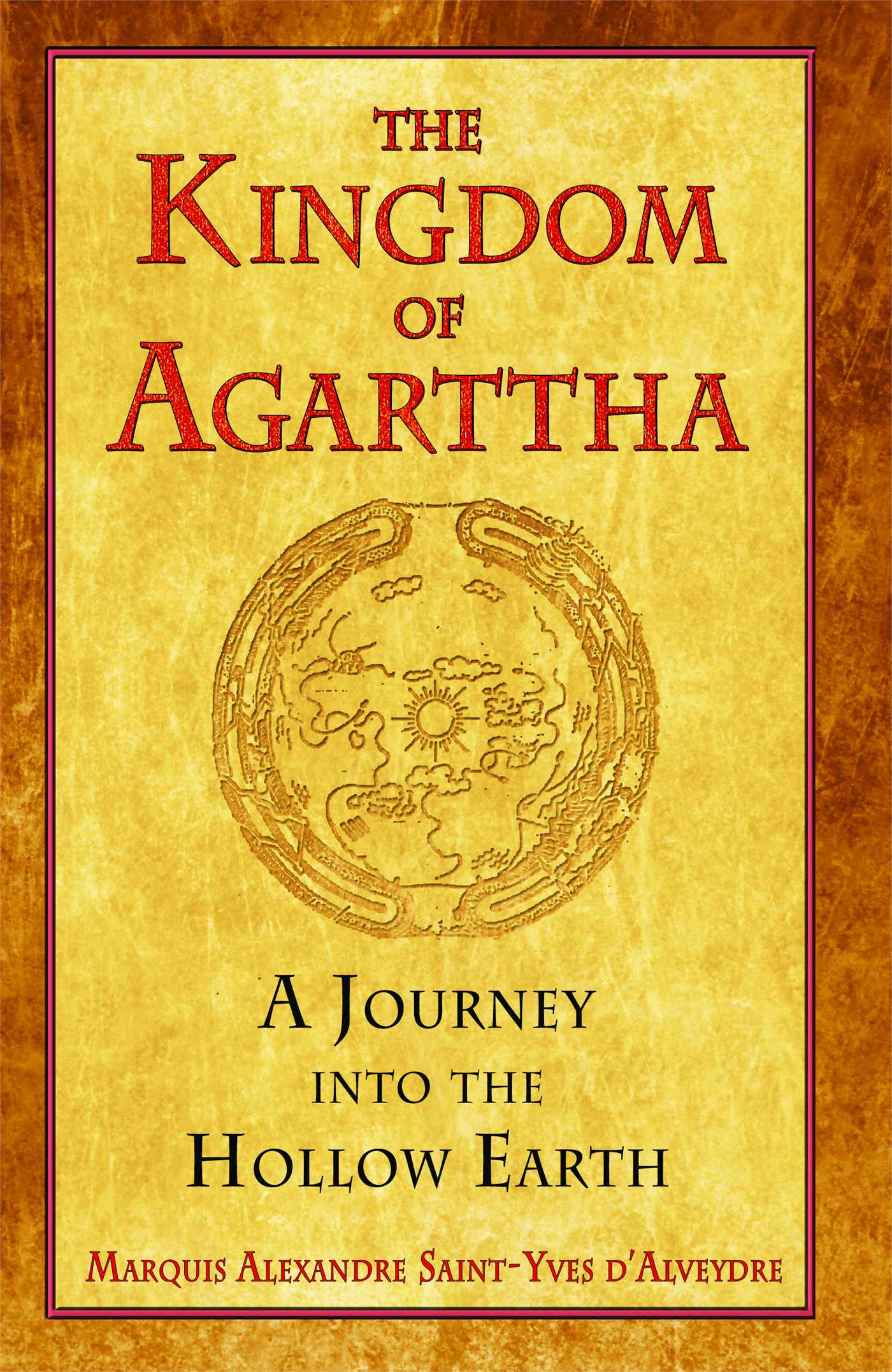 A Journey into the Hollow Earth

• Explores the underground world of Agarttha, sometimes known as Shambhala, a realm that is spiritually and technologically advanced beyond our modern culture

• One of the most influential works of 19th-century occultism

• Written by the philosopher who influenced Papus, Rene Guénon, and Rudolf Steiner

The underground realm of Agarttha was first introduced to the Western world in 1886 by the French esoteric philosopher Alexandre Saint-Yves d’Alveydre with his book Mission de l’Inde, translated here for the first time into English. Saint-Yves’s book maintained that deep below the Himalayas were enormous underground cities, which were under the rule of a sovereign pontiff known as the Brahâtma. Throughout history, the “unknown superiors” cited by secret societies were believed to be emissaries from this realm who had moved underground at the onset of the Kali-Yuga, the Iron Age.

Ruled in accordance with the highest principles, the kingdom of Agarttha, sometimes known as Shambhala, represents a world that is far advanced beyond our modern culture, both technologically and spiritually. The inhabitants possess amazing skills their above ground counterparts have long since forgotten. In addition, Agarttha is home to huge libraries of books engraved in stone, enshrining the collective knowledge of humanity from its remotest origins. Saint-Yves explained that the secret world of Agarttha, and all its wisdom and wealth, would be made available for humanity when Christianity and all other known religions of the world began truly honoring their own sacred teachings.

The current mystical name of the metropolitan sanctuary of the Cycle of Ram was given to it following the schism of Irshu almost fifty-one centuries ago. This name, Agarttha, means “inaccessible to violence and inaccessible to Anarchy.”
On the surface and in the bowels of the earth, the true extent of Agarttha defies the embrace and the constraint of profanation and violence.
In Asia alone there are a half billion people who are more or less aware of its existence and its greatness--not to mention America, whose subterranean regions belonged to Agarttha in very remote antiquity.
But nowhere will there be found among them a traitor who would provide the precise location where its pontifical head and its judicial heart are located.
If this were to somehow happen nonetheless, and if Agarttha were invaded despite its numerous and terrible defenders, every conquering army, even if it consisted of a million men, would see a repetition of the thundering response of the Temple of Delphi to the countless hordes sent by the Persian satraps.
By calling to their aid the cosmic powers of Earth and Heaven, the Templars and the confederates of Agarttha, even in defeat, could blow up a part of the planet if necessary, destroying these profaners and their country of origin in a cataclysm.
It is for these reasons that the central portion of this sacred earth has never been profaned, despite the ebb and flow, the mutual shock and collapse of military empires from Babylon to the Turanian Kingdom of Upper Tartary, from Susa to Pella, from Alexandria to Rome.

With a sure knowledge of Europe’s true frontier in Asia, our Celtic ancestor Ram established the Sacred College in the most splendid sites the earth has to offer and sat at its head as the culmination of his initiatory path.
More than three thousand years after the time of Ram, beginning with the schism of Irshu, the university center of the Synarchy of the Lamb and Aries underwent its first relocation, about which it is not my place to divulge any further detail.
Finally, close to fourteen centuries after Irshu, and a short time after Çakya Muni, the decision for another change of location was made.
Let it be sufficient for my readers to know that in certain regions of the Himalayas, among the twenty-two temples representing the twenty two mysteries of Hermes and the twenty-two letters of certain sacred alphabets, the Agarttha forms the mystical zero, which is to be found nowhere.
The sacred territory of Agarttha is independent, organized in accordance with Synarchic principles, and consists of a population that has grown to approach twenty million souls.
Around this sacred territory and its already considerable population, there extends a Synarchic confederation of peoples, whose total population is greater than forty million souls.
It is with this shield that European conquerors will have to deal initially, trying in vain to win through force what only a loyal alliance can give them.

What I am about to relate both here and throughout the book will seem like a story straight from One Thousand and One Nights, yet nothing could be more real.
The actual university archives of Paradesa occupy thousands of miles. For cycles of many centuries, several high initiates possessing the secrets of only certain religions, and knowing the true purpose of certain works, have been obliged, beginning each year, to spend three years carving on stone tablets all the facts concerning the four hierarchies of sciences forming the total corpus of knowledge.
Each one of these scholars performs his work in solitude, far from any visible light, beneath the cities, deserts, plains, or mountains. The reader should picture in his mind a colossal chessboard that extends under the earth’s surface to cover almost every region of the globe.
All the splendors of humanity’s time on earth can be found in each square of this chessboard. In some squares the encyclopedias of the centuries and millennia are located, while in others, lastly, are those of the major and minor Yugas.
On the day when Europe finally replaces the anarchy of its general government with Trinitarian Synarchy, all of these marvels as well as a good many others will become spontaneously accessible to the representatives of its first amphictyonic chamber: the Chamber of Teaching. But until then, woe to the curious and the careless who endeavor to scour the earth!
Only the Sovereign Pontiff of Agarttha with his principal assessors, about whom I will speak in greater detail later, holds within his total wisdom and supreme initiation the entire sacred catalog of this planetary library.
He alone possesses in its entirety the cyclical key that is essential not only for opening each of its shelves but also for knowing exactly what each of these shelves holds, for making one’s way from one shelf to the next, and, most importantly, for knowing how to get back out again.
Otherwise, what good would come to the profaner who has succeeded in forcing open one of the underground squares of this brain, this integral memory of humanity!
With all its dreadful weight, the stone door that seals each of these squares, lacking any kind of keyhole, will fall shut upon him, never to be opened again.
In vain, before realizing his terrible fate, he will find himself facing the mineral pages that make up this cosmic book, unable to spell even a single word of it, nor able to decipher the least of its mysteries before realizing that he has descended forever into a tomb from which his cries will never be heard by any visible being.

Ah! If Anarchy were not presiding over the relations of the peoples on earth, what a colossal renaissance would be achieved through all our religions and all our universities!
Marquis Alexandre Saint-Yves d'Alveydre

The Marquis Alexandre Saint-Yves d’Alveydre (1842-1909) is a key figure of French esoteric tradition who had a great influence on the magus Papus (who described Saint-Yves as his “intellectual teacher”) as well as Helena Blavatsky, Rudolf Steiner, and René Guénon. Saint-Yves also was the creator of the Archeometer, a measuring instrument, which he claimed was a “key” to understanding the Mysteries of the Word.

“There is a grandeur to this book. Its vivid and elegant prose lifts it far above the logorrheic authors of visionary and channeled literature. It rivals the fantasy fiction of H. P. Lovecraft or Jorge Luis Borges and reminds us that the earth is a place with many unexplored corners, enigmas, and surprises in store for us surface-dwellers.”

– Joscelyn Godwin, from the introduction

"Nowhere in the pages of The Kingdom of Agarttha will you find references to fantastic beasts or extraterrestrials haunting the bowels of the hollow earth. This is a serious study of how humanity can improve itself, with special reference to religious and political harmony, if we follow the Agartthian example."

". . . this is indeed a grand book about ancient civilizations, cosmic destiny, lost continents, great wisdom, and vast spans of time."

A Journey into the Hollow Earth