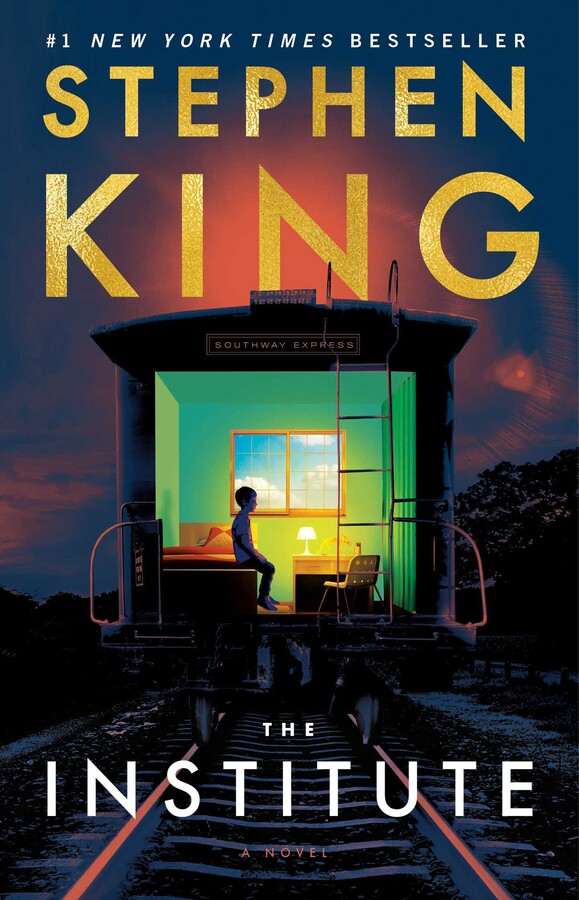 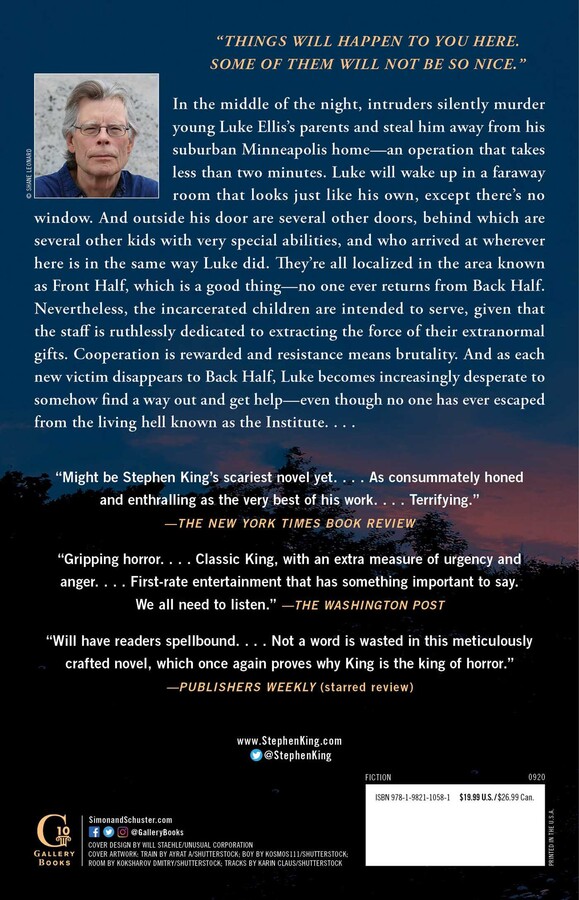 By Stephen King
LIST PRICE $19.99
PRICE MAY VARY BY RETAILER

From #1 New York Times bestselling author Stephen King, the most riveting and unforgettable story of kids confronting evil since It. “This is King at his best” (The St. Louis Post-Dispatch).

In the middle of the night, in a house on a quiet street in suburban Minneapolis, intruders silently murder Luke Ellis’s parents and load him into a black SUV. The operation takes less than two minutes. Luke will wake up at The Institute, in a room that looks just like his own, except there’s no window. And outside his door are other doors, behind which are other kids with special talents—telekinesis and telepathy—who got to this place the same way Luke did: Kalisha, Nick, George, Iris, and ten-year-old Avery Dixon. They are all in Front Half. Others, Luke learns, graduated to Back Half, “like the roach motel,” Kalisha says. “You check in, but you don’t check out.”

In this most sinister of institutions, the director, Mrs. Sigsby, and her staff are ruthlessly dedicated to extracting from these children the force of their extranormal gifts. There are no scruples here. If you go along, you get tokens for the vending machines. If you don’t, punishment is brutal. As each new victim disappears to Back Half, Luke becomes more and more desperate to get out and get help. But no one has ever escaped from the Institute.

As psychically terrifying as Firestarter, and with the spectacular kid power of It, The Institute “is another winner: creepy and touching and horrifyingly believable, all at once” (The Boston Globe).

The Institute 1
Half an hour after Tim Jamieson’s Delta flight was scheduled to leave Tampa for the bright lights and tall buildings of New York, it was still parked at the gate. When a Delta agent and a blond woman with a security badge hanging around her neck entered the cabin, there were unhappy, premonitory murmurings from the packed residents of economy class.

“May I have your attention, please!” the Delta guy called.

“How long’s the delay gonna be?” someone asked. “Don’t sugarcoat it.”

“The delay should be short, and the captain wants to assure you all that your flight will arrive approximately on time. We have a federal officer who needs to board, however, so we’ll need someone to give up his or her seat.”

A collective groan went up, and Tim saw several people unlimber their cell phones in case of trouble. There had been trouble in these situations before.

“Delta Air Lines is authorized to offer a free ticket to New York on the next outbound flight, which will be tomorrow morning at 6:45 AM—”

Another groan went up. Someone said, “Just shoot me.”

The functionary continued, undeterred. “You’ll be given a hotel voucher for tonight, plus four hundred dollars. It’s a good deal, folks. Who wants it?”

He had no takers. The security blond said nothing, only surveyed the crowded economy-class cabin with all-seeing but somehow lifeless eyes.

“Eight hundred,” the Delta guy said. “Plus the hotel voucher and the complimentary ticket.”

“Guy sounds like a quiz show host,” grunted a man in the row ahead of Tim’s.

There were still no takers.

And still none. Tim found this interesting but not entirely surprising. It wasn’t just because a six forty-five flight meant getting up before God, either. Most of his fellow economy-class passengers were family groups headed home after visiting various Florida attractions, couples sporting beachy-keen sunburns, and beefy, red-faced, pissed-off-looking guys who probably had business in the Big Apple worth considerably more than fourteen hundred bucks.

Someone far in the back called, “Throw in a Mustang convertible and a trip to Aruba for two, and you can have both our seats!” This sadly provoked laughter. It didn’t sound terribly friendly.

The gate agent looked at the blond with the badge, but if he hoped for help there, he got none. She just continued her survey, nothing moving but her eyes. He sighed and said, “Sixteen hundred.”

Tim Jamieson suddenly decided he wanted to get the fuck off this plane and hitchhike north. Although such an idea had never so much as crossed his mind before this moment, he found he could imagine himself doing it, and with absolute clarity. There he was, standing on Highway 301 somewhere in the middle of Hernando County with his thumb out. It was hot, the lovebugs were swarming, there was a billboard advertising some slip-and-fall attorney, “Take It on the Run” was blaring from a boombox sitting on the concrete-block step of a nearby trailer where a shirtless man was washing his car, and eventually some Farmer John would come along and give him a ride in a pickup truck with stake sides, melons in the back, and a magnetic Jesus on the dashboard. The best part wouldn’t even be the cash money in his pocket. The best part would be standing out there by himself, miles from this sardine can with its warring smells of perfume, sweat, and hair spray.

The second-best part, however, would be squeezing the government tit for a few dollars more.

He stood up to his perfectly normal height (five-ten and a fraction), pushed his glasses up on his nose, and raised his hand. “Make it two thousand, sir, plus a cash refund of my ticket, and the seat is yours.”

By Stephen King
LIST PRICE $19.99
PRICE MAY VARY BY RETAILER