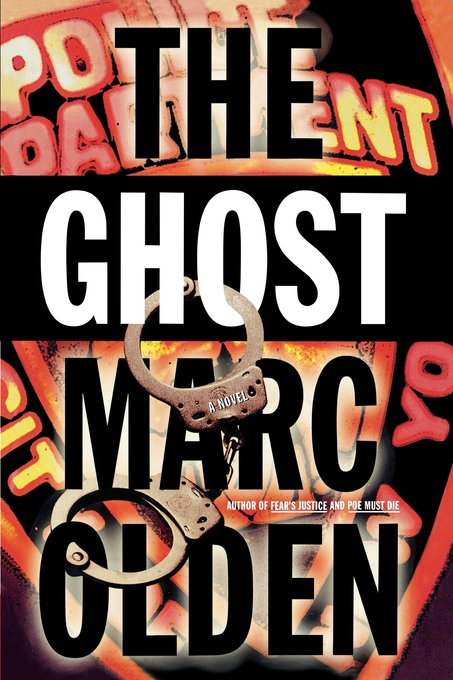 By Marc Olden
LIST PRICE $14.99
PRICE MAY VARY BY RETAILER

The Ghost -- the code name for the secret member of an undercover cop's backup team. It is the Ghost's job to remain hidden, blending into the scenery, maintaining close observation of his assignment's surroundings. In short, he's supposed to keep the undercover cop alive. The Ghost's relationship with his undercover cop is unrivaled in its intensity.
But every relationship has unpredictable turns, and in Marc Olden's The Ghost, undercover cop Rosalind "Ross" Magellan's relationship with her Ghost is no different. Magellan, impulsive, seductive, and an expert at the art of deceit and manipulation, is addicted to the rush of leading a double life; she has posed as a prostitute and a junkie to uncover dealers and sleazy players associated with New York City's underground night culture. Roaming desolate streets, abandoned buildings, and after-hours clubs without a police radio, badge, or vest, and often without a gun, her character reveals the true underbelly of New York City.
In the tradition of Ed McBain and Elmore Leonard, Marc Olden's fastidious attention to nuance and the inner workings of the police reveals the work of a master crime writer. Mined with murder, blackmail, drugs, and betrayal, The Ghost is a story that will stay with readers forever.

Chapter 1
The Watcher
He followed her for two days. Waited in the shadows across from her Manhattan apartment.
Tailed her to Central Park on a cool June morning then watched her jog around Sheep Meadow.
Tracked her car to Queens, to an empty Italian restaurant where she sat alone in a back booth for forty minutes. She seemed jumpy.
His guess: She'd been stood up.
He watched through the restaurant window and made entries in his journal. She used a cell phone -- two calls -- then ordered a salad that she ignored.
He kept a journal on each woman, his personal record of occurrences, reflections, and experiences.
She was the only one still alive.
He returned to his car. Waiting didn't bother him; he was a tenacious man, born with forceful willpower and a bulldog tenacity. He deliberately gave the impression of being indifferent and unconcerned, but his mind never stopped plotting.
He switched on the tape deck, sipped his black coffee, then slumped in the front seat. Head back, eyes closed. Listening to Pavarotti. Fat Lucy, if you will.
His love for the woman was like opera. Reckless and intense; all or nothing. He couldn't bear to have her out of his sight.
He'd done some reflecting and decided a bowlegged Dominican riding a mountain bike along Columbus Avenue was also following the woman. The "Domo" sipping Evian water; pretending he's only window-shopping. Cute.
He knew why the guy was dogging her. She'd put people in prison, and now someone wanted to get even.
The Dominican could have been a purse snatcher. A crack dealer making his rounds. He could have decided he liked the lady's butt and craved a closer look. Latinos, bless 'em, enjoyed going on booty patrol. Maybe the Domo was looking for a pickup basketball game: half court, five bucks a man. He could have several reasons for riding his little black bike from Columbus Avenue to Central Park West and back again.
The Dominican was actually a contract killer with seven, eight bodies on him. The Watcher had been in the station house when the Domo was being booked. Not for murder but for setting a dog on fire and throwing it from a roof in Washington Heights.
She was still in the restaurant. Sipping a cappuccino and looking at her watch.
The Watcher couldn't protect her against all of her enemies. She had too many.
He had a plan. It couldn't miss.
Leave New York. Just the two of them. With enough money to live comfortably for the rest of their lives.
He was confident and composed. Credit Tai Chi and origami. Tai Chi for conditioning and cool nerves; origami for patience and a sense of beauty.
Fold a thousand origami cranes and your wish will be granted.
He couldn't fold a crane without thinking of her.
She left the restaurant and drove to the Queens Public Library where she examined back issues of New York newspapers. She photocopied a few pages, arousing his curiosity.
He wanted a closer look but decided no. Too risky.
Good move. Minutes later who strolls into the library but her lover, a former NYPD homicide detective now in private security. They dined at a nearby Chinese restaurant, read fortune cookies out loud, and laughed.
Later they drove to a popular Cuban nightclub in Jackson Heights and danced to a live salsa band. He watched from a packed bar. His mouth went dry at the sight of her. She was a terrific dancer. Dazzling and seductive. Moving as though close to orgasm.
Midnight. She left the club with her lover and returned to his Brooklyn Heights apartment. They kissed in the lobby, then entered the elevator. The Watcher shivered in disgust. Why did they have to be so public?
He stared into the rearview mirror, thinking about today's actions and episodes. Examining and scrutinizing her every action. The lady was up to something. Yes, indeed.
He switched on a penlight and began reading his journal.
The Italian restaurant. The library.
He thought, I sense a theme here.
She hadn't been stood up. She'd gone to the restaurant for a meeting, a little singsong around the campfire, you might say. But nothing face-to-face.
She'd been talking to someone hiding in the kitchen or storeroom. It explained the cell phone and why she was a bit twitchy. Why she had no interest in food.
The lady was gathering information. The Watcher could read her like a book. He knew exactly where she was going. He'd committed a murder to protect one of the most important men in the city and the lady was going after him.
Score one for the Watcher.
Copyright &copy; 1999 by Marc Olden
Marc Olden

By Marc Olden
LIST PRICE $14.99
PRICE MAY VARY BY RETAILER