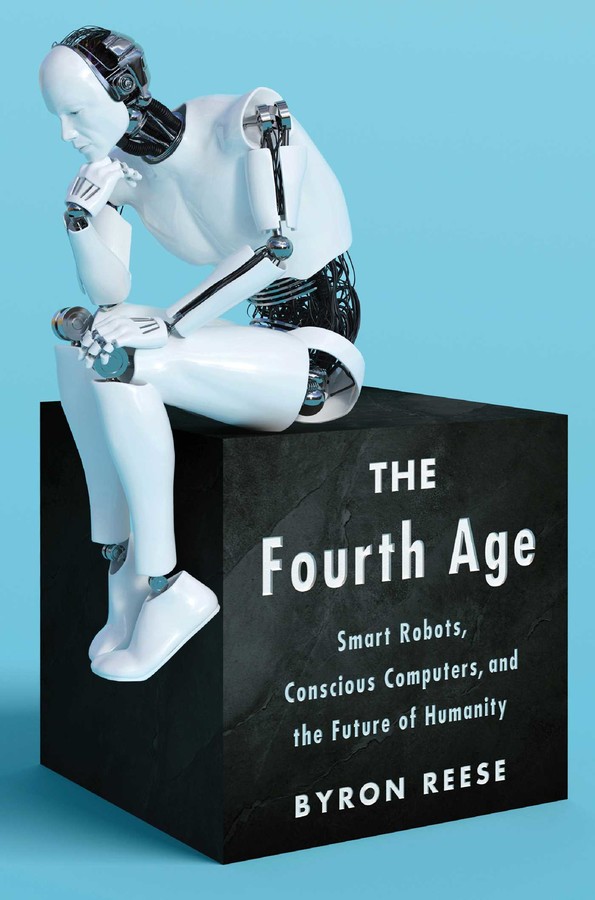 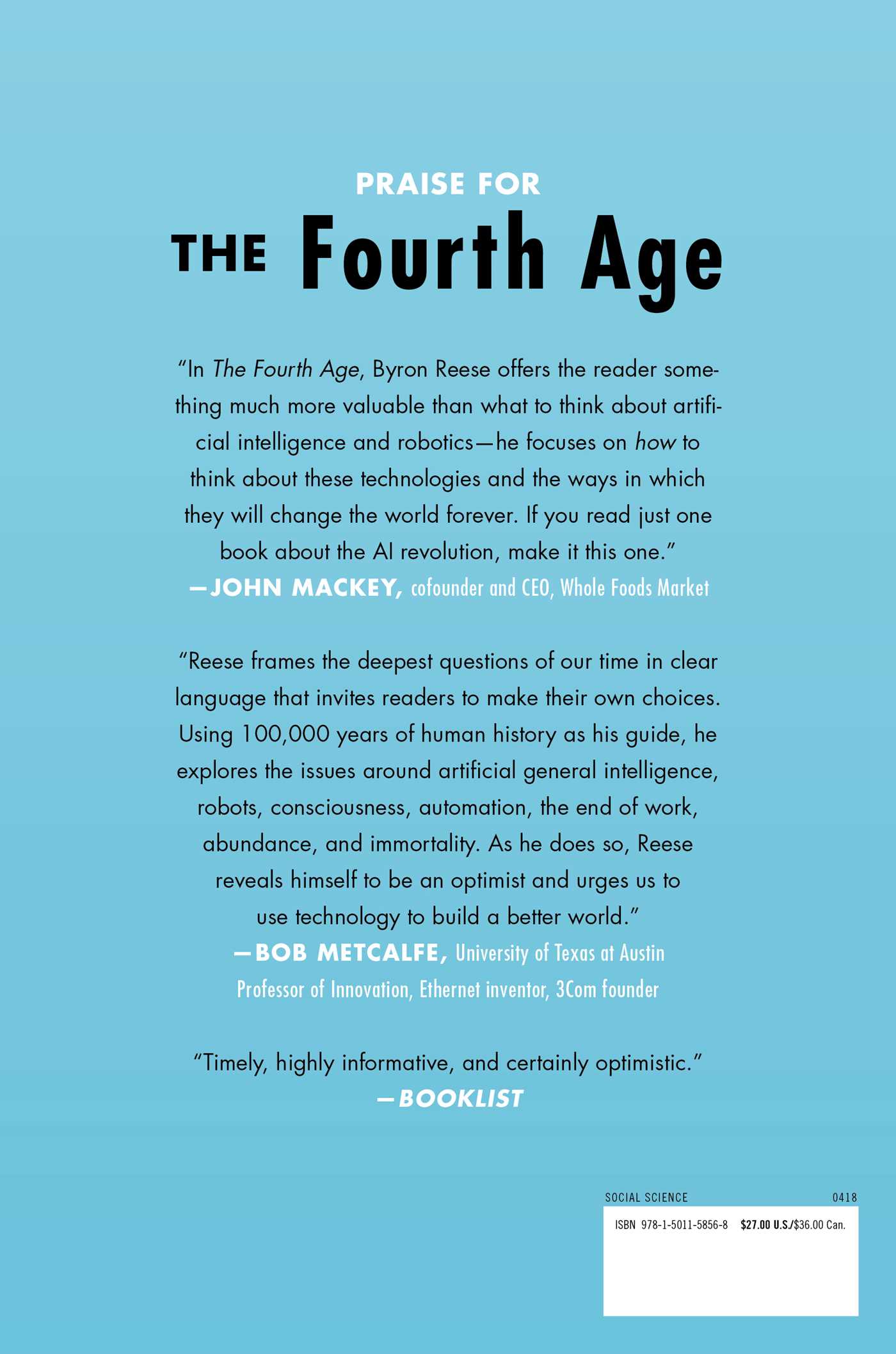 “The Fourth Age not only discusses what the rise of A.I. will mean for us, it also forces readers to challenge their preconceptions. And it manages to do all this in a way that is both entertaining and engaging.” —The New York Times

As we approach a great turning point in history when technology is poised to redefine what it means to be human, The Fourth Age offers fascinating insight into AI, robotics, and their extraordinary implications for our species.

In The Fourth Age, Byron Reese makes the case that technology has reshaped humanity just three times in history:

- 10,000 years ago, we developed agriculture, which led to cities and warfare.

- 5,000 years ago, we invented the wheel and writing, which lead to the nation state.

We are now on the doorstep of a fourth change brought about by two technologies: AI and robotics. The Fourth Age provides extraordinary background information on how we got to this point, and how—rather than what—we should think about the topics we’ll soon all be facing: machine consciousness, automation, employment, creative computers, radical life extension, artificial life, AI ethics, the future of warfare, superintelligence, and the implications of extreme prosperity.

By asking questions like “Are you a machine?” and “Could a computer feel anything?”, Reese leads you through a discussion along the cutting edge in robotics and AI, and, provides a framework by which we can all understand, discuss, and act on the issues of the Fourth Age, and how they’ll transform humanity.

The Fourth Age INTRODUCTION
The most distinctive characteristic of the last century or so might seem to be the enormous amount of change that has occurred. Dozens, if not hundreds, of advances are said to have revolutionized our lives. The list includes automobiles, air travel, television, the personal computer, the Internet, and cell phones. Change is everywhere. We have harnessed the atom, flown into space, invented antibiotics, eliminated smallpox, and sequenced the genome.

But within the context of the overall arc of human history, little has changed in the past five thousand years. Just like the people who lived five millennia ago, we too have moms, dads, kids, schools, governments, religions, war, peace. We still celebrate births and mourn death. Forever with us, universal to all cultures of humanity, are sports, weddings, dancing, jewelry, tattoos, fashion, gossip, social hierarchy, fear, love, joy, happiness, and ecstasy. Looked at through this lens, humanity really hasn’t changed much in all that time. We still go to work in the morning;, only the way we get there has changed. In ancient Assyria, toddlers pulled around small wooden horsey toys on wheels with a string. In classical Greece, boys played tug-of-war. Ancient Egypt was renowned for its cosmetics, and millennia ago, Persians celebrated birthdays in much the same way as we do, with parties, presents, and special desserts.

No, the remarkable thing about our time is not the change we have seen; rather, it is the change we haven’t seen. The really amazing thing is how similar we are to our forebears. In ancient Rome, gladiators were paid celebrity spokesmen who recited product plugs just before the competition: “That’s why I use Antinius’s swords. You won’t find a better sword at any price.” And just like in our times, there were people willing to perform dramatically destructive acts just for the fame that doing so brought about, as was said to have happened on July 21, 356 BC, when an arsonist named Herostratus burned down the Temple of Artemis at Ephesus, one of the Seven Wonders of the Ancient World, simply for the everlasting fame it would bring him. In response, a law was passed that made saying his name a crime, but clearly Herostratus got his wish.

If you went to visit a friend in antiquity, you might have seen mounted on the door a brass lion’s head with a ring in its mouth to be used to announce your arrival. If you attended a wedding five thousand years ago, you likely would have joined the wedding party as they wished good fortune on the new couple by throwing rice. Today, when we read that archaeologists have dug up ancient lead slingshot bullets each engraved with the word “catch,” we still get the joke.

These people of antiquity were just like us. To really appreciate the unchanging nature of humans, one need look no farther than a book called Characters written by a Greek named Theophrastus 2,300 years ago. He satirized humanity itself, and sorted us all by type, such as the Flatterer, the Boor, the Chatty Man, and so forth. If you know someone who takes photos of his meals and posts them online, you might see him in the person Theophrastus calls the Garrulous Man, who “begins with a eulogy of his wife, relates the dream he had the night before, tells dish by dish what he had for supper,” and concludes that “we are by no means the men we were” in times past. Theophrastus then goes on to describe the Stupid Man, who “when he goes to the play, is left at the end fast asleep in an empty house. . . . After a hearty supper he has to get up in the night, returns only half awake, misses the right door, and is bitten by his neighbor’s dog.”

No, against the backdrop of history, our time has seen very little change. In fact, I maintain that things have only really changed three times in human history. Each time was due to technology. Not just a single technology, but groups of interrelated technologies that changed us in fundamental and permanent, even biological, ways. That’s it. Just three big changes so far.

This book is about the fourth one. 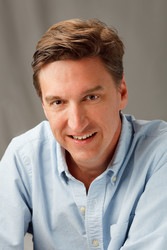 Byron Reese is the CEO and publisher of the technology research company Gigaom, and the founder of several high-tech companies. He has spent the better part of his life exploring the interplay of technology with human history. Reese has obtained or has pending patents in disciplines as varied as crowdsourcing, content creation, and psychographics. The websites he has launched, which cover the intersection of technology, business, science, and history, have together received over a billion visitors. He is the author of the acclaimed book, Infinite Progress. He lives in Austin, Texas.

“The Fourth Age not only discusses what the rise of A.I. will mean for us, it also forces readers to challenge their preconceptions. And it manages to do all this in a way that is both entertaining and engaging.”

“In The Fourth Age, Byron Reese offers the reader something much more valuable than what to think about Artificial Intelligence and robotics—he focuses on  HOW to think about these technologies, and the ways in which they will change the world forever. If you only read just one book about the AI revolution, make it this one.”

"Reese frames the deepest questions of our time in clear language that invites readers to make their own choices. Using 100,000 years of human history as his guide, he explores the issues around artificial general intelligence, robots,  consciousness, automation, the end of work, abundance, and immortality. As he does so, Reese reveals himself to be an optimist and urges us to use technology to build a better world."