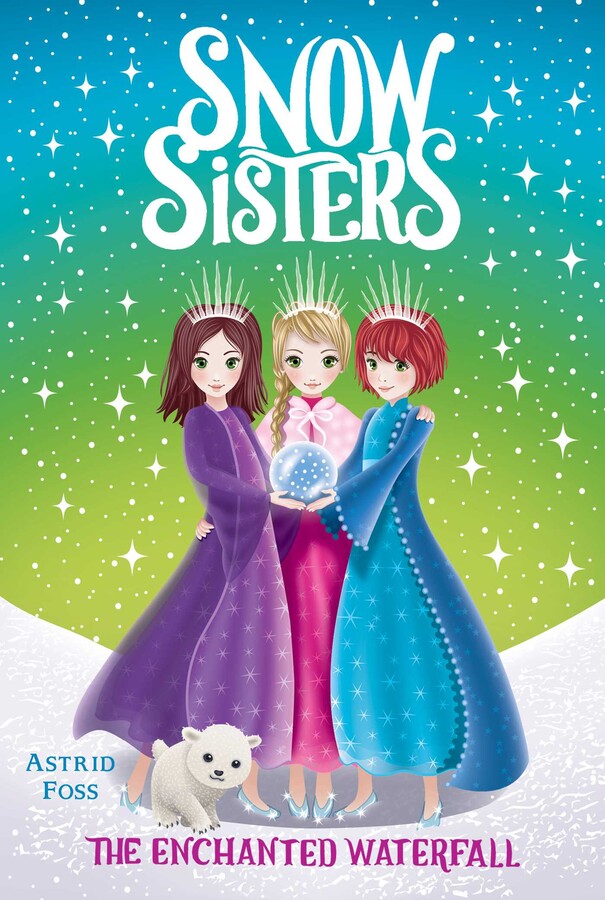 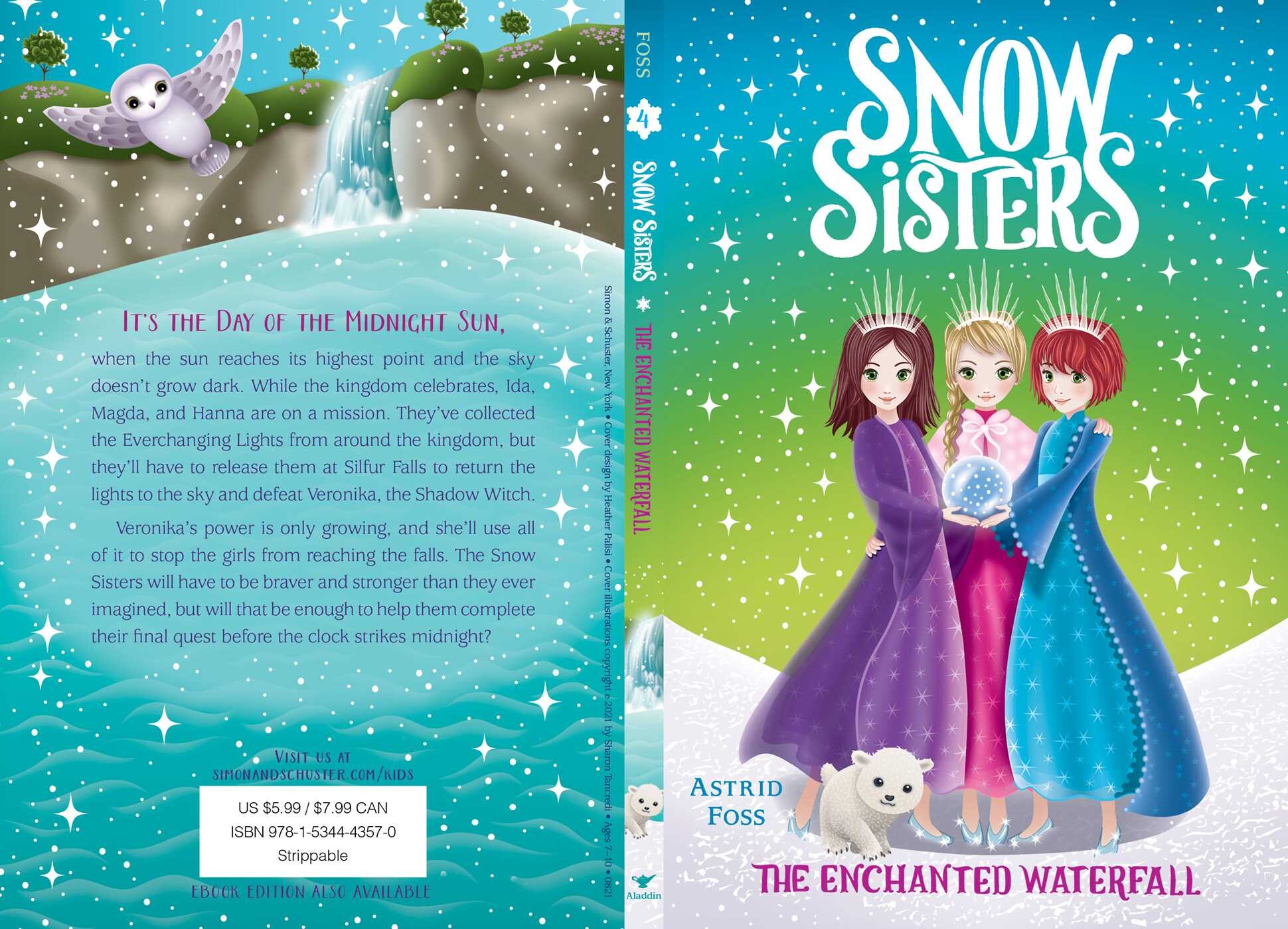 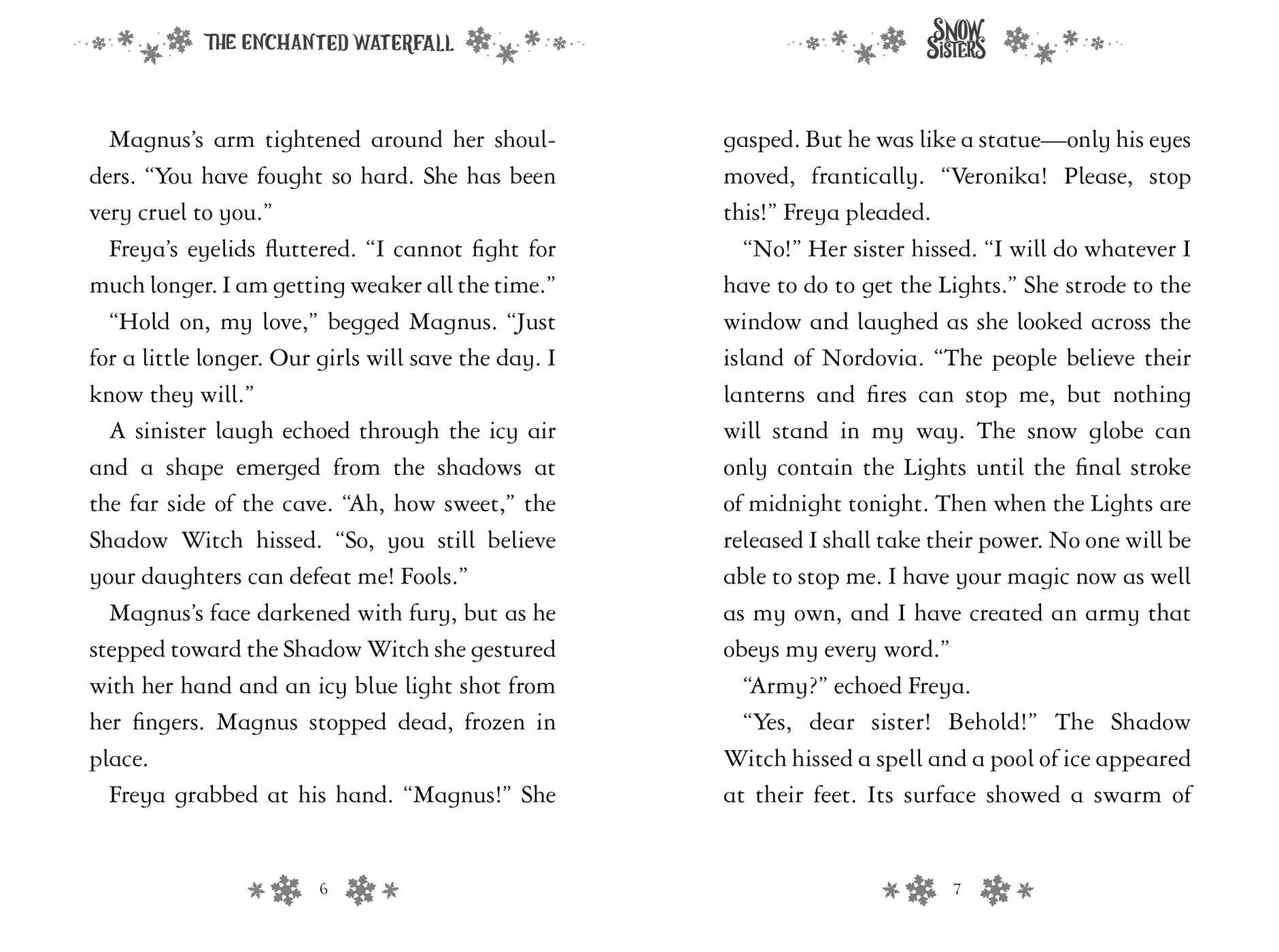 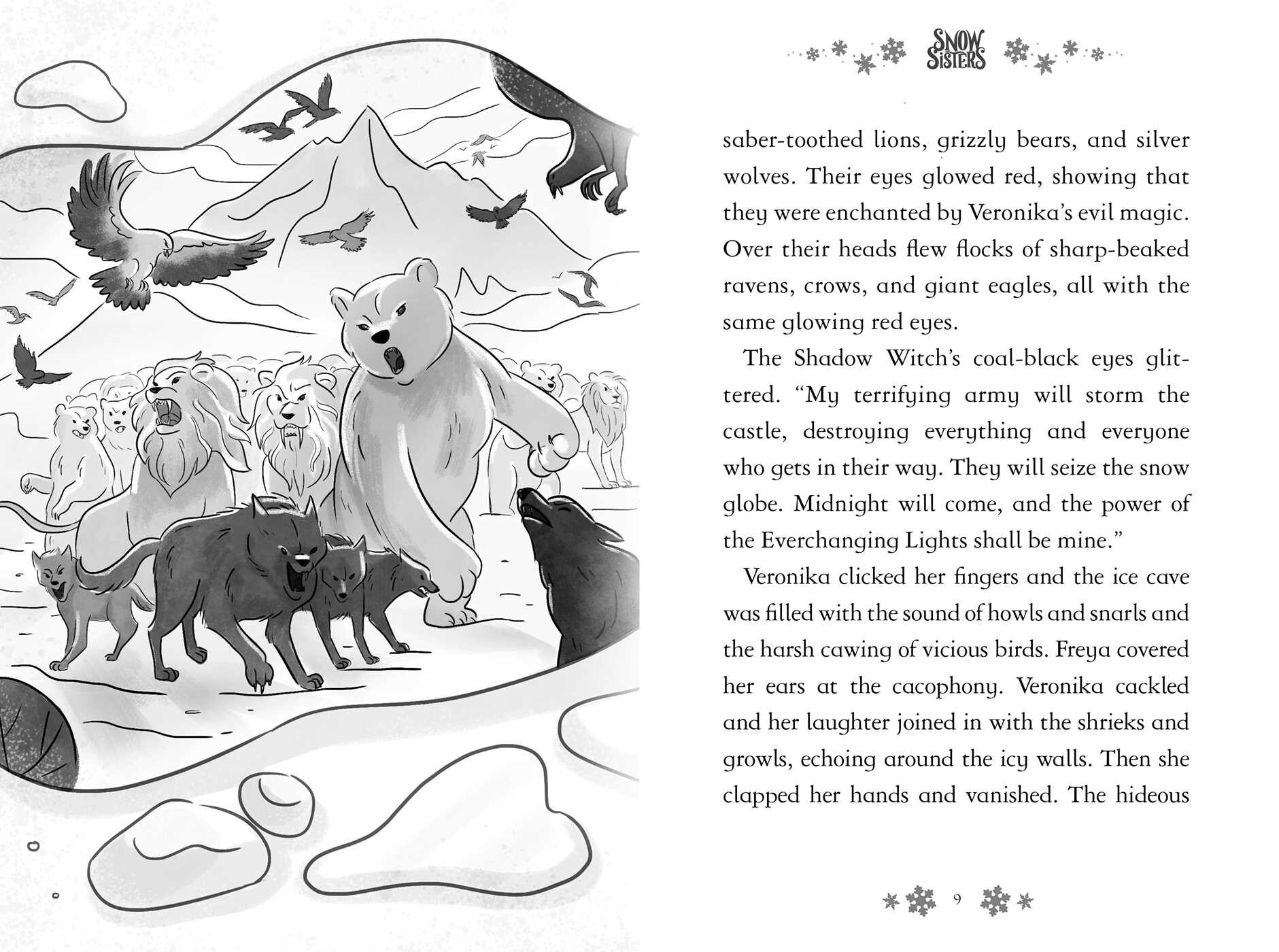 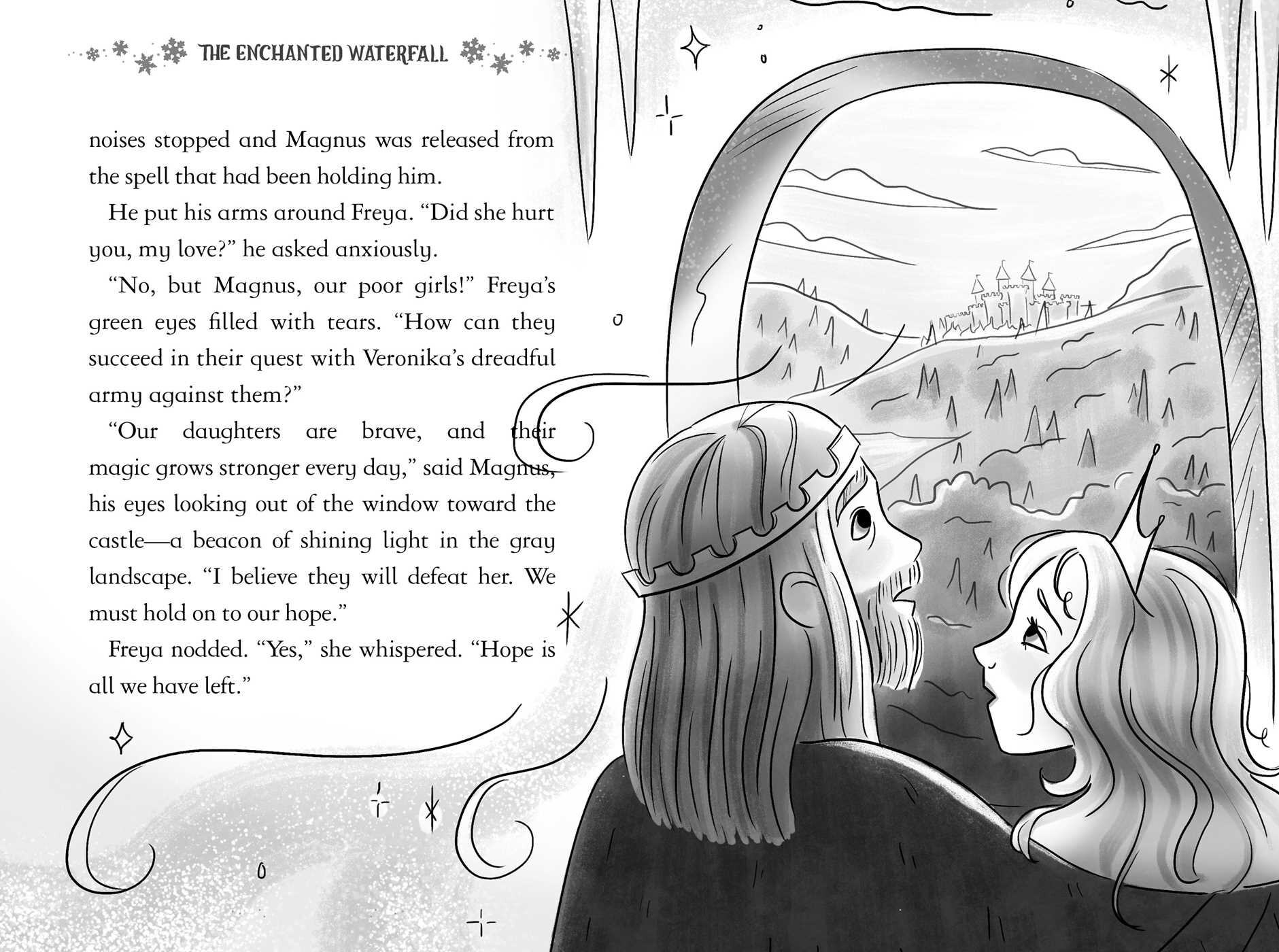 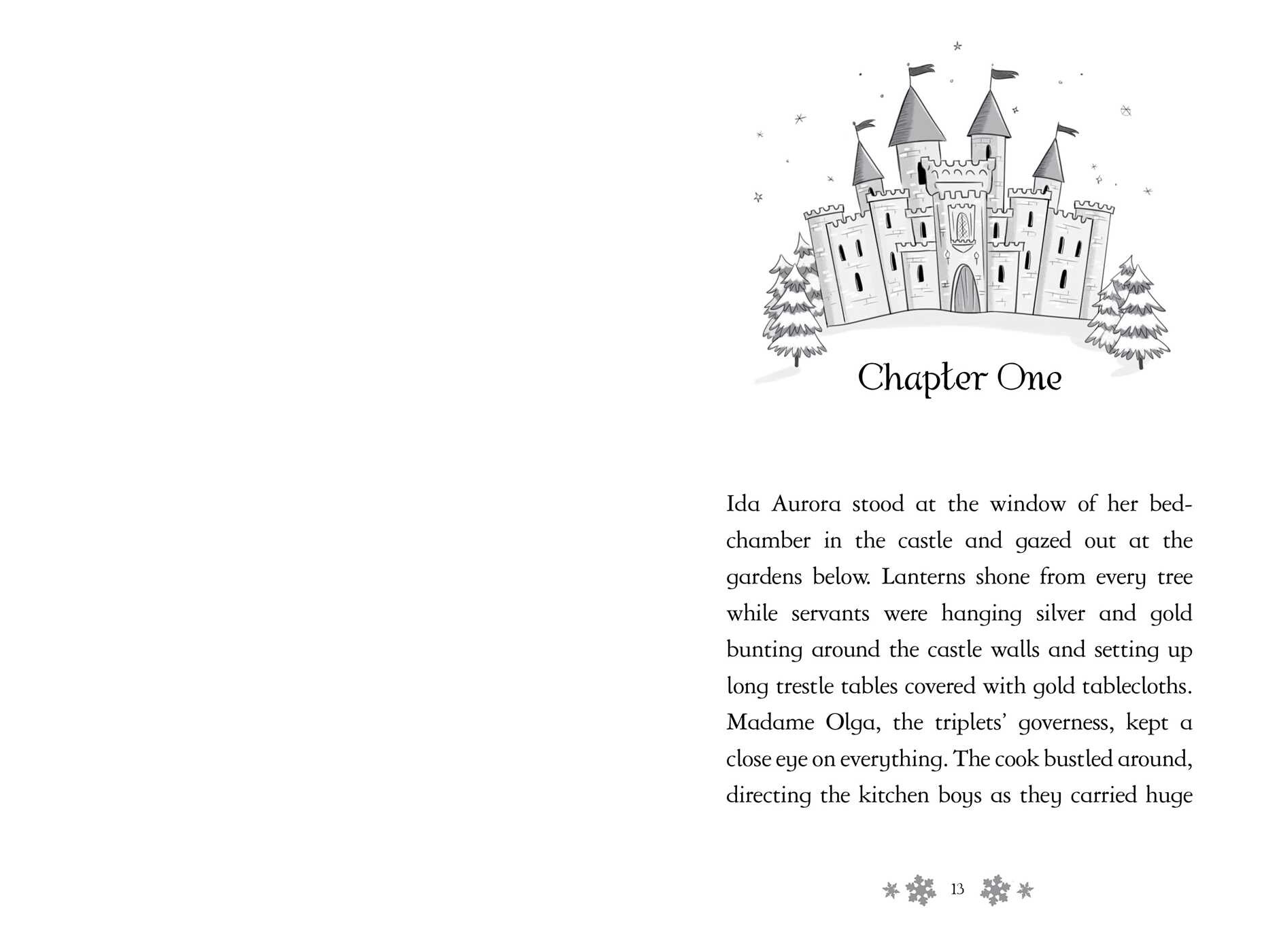 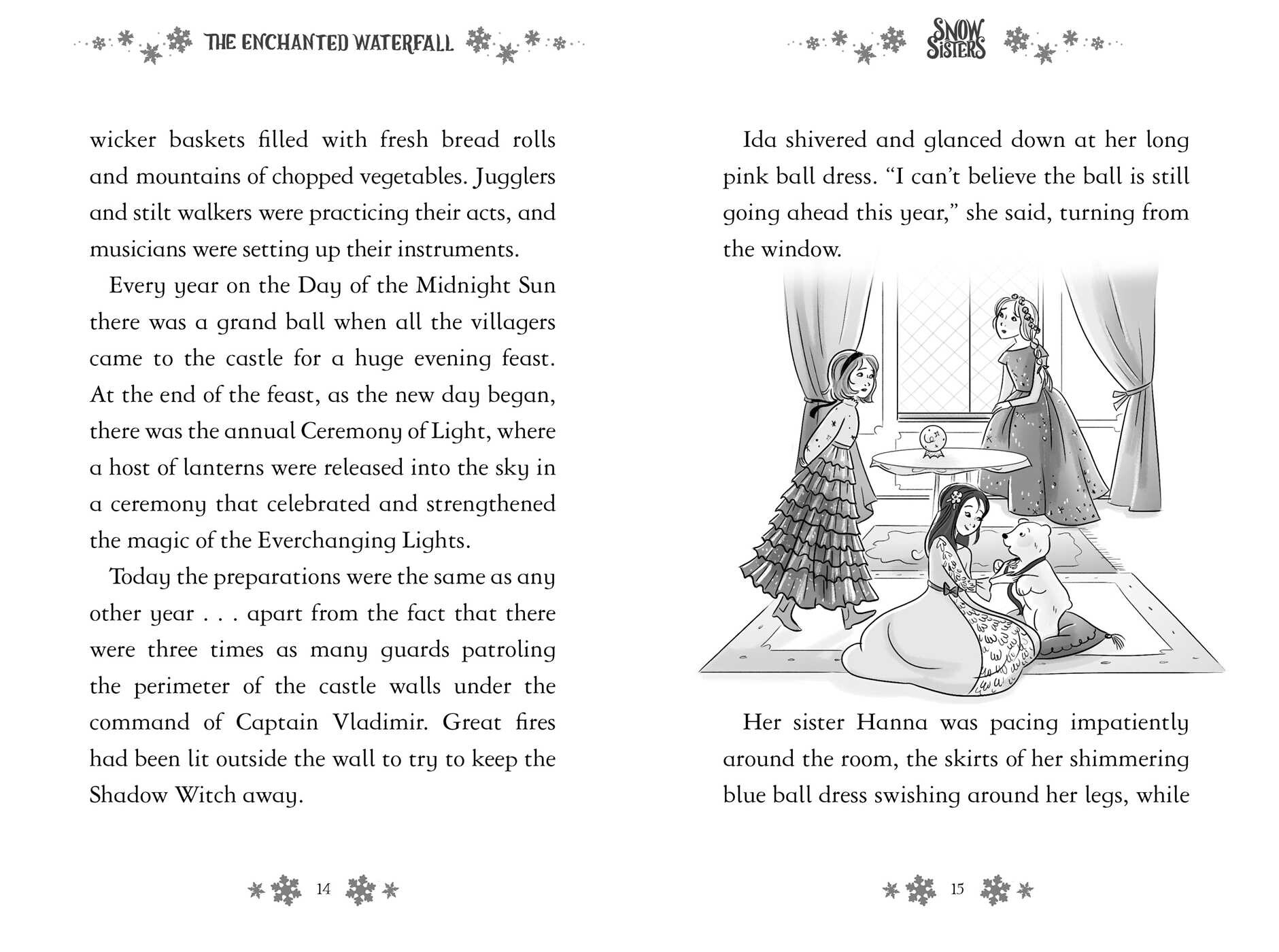 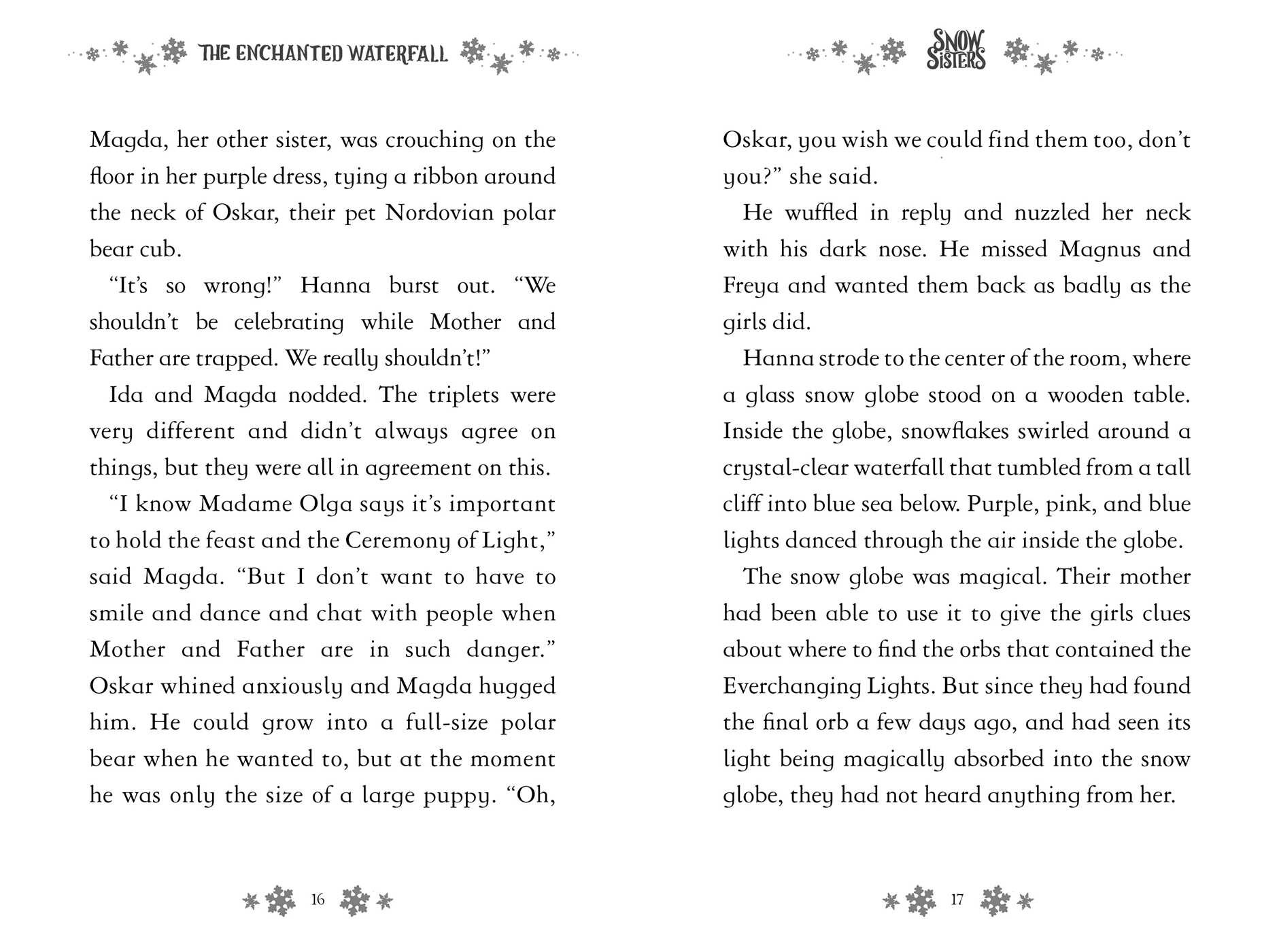 The Snow Sisters have one last chance to save the Everchanging Lights—and their parents—in this fourth and final installment in the magical chapter book series perfect for fans of Snow and Rose and Disney’s Frozen!

It’s the Day of the Midnight Sun, and the evil Shadow Witch is ready to use all her power to steal the magic of the Everchanging Lights that protect the kingdom. The Snow Sisters must be braver and stronger than they ever imagined for their final quest. Only they can rescue their parents and stop the Shadow Witch from turning their world dark forever. Can they reach Silfur Falls and return the Everchanging Lights to the sky before the clock strikes midnight?

Chapter One
Ida Aurora stood at the window of her bedchamber in the castle and gazed out at the gardens below. Lanterns shone from every tree while servants were hanging silver and gold bunting around the castle walls and setting up long trestle tables covered with gold tablecloths. Madame Olga, the triplets’ governess, kept a close eye on everything. The cook bustled around, directing the kitchen boys as they carried huge wicker baskets filled with fresh bread rolls and mountains of chopped vegetables. Jugglers and stilt walkers were practicing their acts, and musicians were setting up their instruments.

Every year on the Day of the Midnight Sun there was a grand ball when all the villagers came to the castle for a huge evening feast. At the end of the feast, as the new day began, there was the annual Ceremony of Light, where a host of lanterns were released into the sky in a ceremony that celebrated and strengthened the magic of the Everchanging Lights.

Today the preparations were the same as any other year… apart from the fact that there were three times as many guards patroling the perimeter of the castle walls under the command of Captain Vladimir. Great fires had been lit outside the wall to try to keep the Shadow Witch away.

Ida shivered and glanced down at her long pink ball dress. “I can’t believe the ball is still going ahead this year,” she said, turning from the window.

Her sister Hanna was pacing impatiently around the room, the skirts of her shimmering blue ball dress swishing around her legs, while Magda, her other sister, was crouching on the floor in her purple dress, tying a ribbon around the neck of Oskar, their pet Nordovian polar bear cub.

“It’s so wrong!” Hanna burst out. “We shouldn’t be celebrating while Mother and Father are trapped. We really shouldn’t!”

Ida and Magda nodded. The triplets were very different and didn’t always agree on things, but they were all in agreement on this.

“I know Madame Olga says it’s important to hold the feast and the Ceremony of Light,” said Magda. “But I don’t want to have to smile and dance and chat with people when Mother and Father are in such danger.” Oskar whined anxiously and Magda hugged him. He could grow into a full-size polar bear when he wanted to, but at the moment he was only the size of a large puppy. “Oh, Oskar, you wish we could find them too, don’t you?” she said.

He wuffled in reply and nuzzled her neck with his dark nose. He missed Magnus and Freya and wanted them back as badly as the girls did.

Hanna strode to the center of the room, where a glass snow globe stood on a wooden table. Inside the globe, snowflakes swirled around a crystal-clear waterfall that tumbled from a tall cliff into blue sea below. Purple, pink, and blue lights danced through the air inside the globe.

The snow globe was magical. Their mother had been able to use it to give the girls clues about where to find the orbs that contained the Everchanging Lights. But since they had found the final orb a few days ago, and had seen its light being magically absorbed into the snow globe, they had not heard anything from her.

“I wish Mother would talk to us again,” said Hanna longingly.

“She’s probably too weak,” said Ida, feeling her stomach lurch at the thought of their mother in pain, her magic being drained from her by their evil aunt.

Hanna touched the smooth, cold sides of the snow globe. “Tonight, we’ll save her and Father,” she said, her green eyes flashing with determination. “We’ll take the globe to the Silfur Falls and somehow return the Everchanging Lights to the sky.”

“If we can get out of the castle,” said Ida, fiddling anxiously with the ends of her long blond hair. “Madame Olga’s been watching us like a snow hawk since we ran away to the Rainbow Pools to find the purple orb last week.”

“We’ll get out—we have to!” said Magda. “We’ll wait until everyone has eaten and the dancing starts and then we’ll sneak away.”

“Taking the snow globe with us,” agreed Hanna. “Then we’ll release the lights into the waterfall and they’ll return to the sky.”

“We don’t exactly know how to do that though,” said Ida. “Do we go to the top of the waterfall and throw the snow globe into the water? Or do we place it at the bottom of the cliffs where the water falls into Jorin’s Pool?” She frowned.

“Details, details,” said Hanna impatiently. “We’ll work out what to do when we get there.”

“But what if we don’t have time when we’re there?” protested Ida. “It’s going to take ages to travel to the falls and we’ve got to put the orb in place by midnight. I’m worried we won’t get it right.”

“Being sensible is not fussing!” declared Ida hotly.

Magda jumped to her feet, wanting to stop her sisters before they argued further. “Maybe Mother will manage to talk to us again before we leave and tell us what to do,” she said quickly. “For now, why don’t we concentrate on working out how we’re going to get out of the castle?”

“Yes. We’ll never get out through the main gates,” said Ida. “They’re too well-guarded. You could always change into a bird and fly over the walls,” she said to Magda. “But Hanna and I will need to find another way out.”

Magda nodded. On their twelfth birthday, each sister had developed magical abilities. It happened to all members of the Aurora family. The sisters each had different powers. Magda could transform into any animal she could see; Ida could draw things which would then become real, and Hanna could move things with her mind. Members of the Aurora family all started with one power but could then increase their powers by studying magic and practicing their abilities, just like the girls’ mother and aunt had done.

“How about we wait until everyone’s busy and then we sneak around to the back of the castle where it’s quieter?” suggested Hanna. “You could draw us a long ladder, Ida, and I could use my magic to make it stand against the castle walls so we can climb over. We could take a rope with us and use it to get down the other side,”

“Good idea!” said Ida. “Magda could turn into a bird to keep watch for us and call out when it’s safe and no one is watching.”

“A good one,” said Ida, smiling at Hanna, their argument forgotten.

Hanna ruffled his ears. “Don’t worry. We’ll take you, too, Oskar. We’ll put you in a basket and I’ll carry you over the wall.”

Oskar bounded around in delight. He grabbed the roll of purple ribbon that Magda had been using to tie a bow around his neck and raced off around the bedchamber. It spilled out, leaving a trail of ribbon behind him.

“Oskar, stop!” Magda giggled, trying to grab him but missing.

Ida and Hanna chased after him. The cub dodged and swerved, his dark eyes gleaming mischievously. He ran through Ida’s legs, making her squeal and fall over.

“Got you, you naughty cub!” Hanna gasped, throwing herself at Oskar and rolling on the floor with him, just as the door opened and Madame Olga, the girls’ governess, came in. She was looking as neat and tidy as ever, her hair in a perfect roll at the back of her neck, her navy-blue dress spotless. Her eyebrows rose as she saw Hanna, Magda, and Ida all sprawling on the floor.

“Whatever are you doing?” she exclaimed. “This is not the behavior I expect of young ladies—young ladies who have a grand ball to attend!”

The girls sheepishly got to their feet.

“Sorry, Madame Olga,” said Ida as Magda quickly started to roll up the ribbon and Hanna put Oskar in his bed.

“Hmm,” Madame Olga did not look impressed. “Well, if he can’t behave he’ll have to stay in the stables tonight.”

“See that you do,” said Madame Olga sharply. “There’s quite enough to worry about without Oskar getting in the way.”

“Maybe we should just not have the ball tonight?” Hanna said hopefully.

Madame Olga fixed her with a stern look. “Hanna Aurora, we have been through this before. Canceling the ball would ruin hundreds of years of tradition and, far worse, send a message to your aunt that we are scared of her. The people of Nordovia will not give in to her evil. Your parents would not want us to.”

Hanna bit her lip but didn’t say anything more. All the girls knew there was no point arguing with Madame Olga.

“Now, finish getting ready and come downstairs,” said Madame Olga. “The guests will be arriving in an hour and you must all be there to greet them with tidy hair and immaculate dresses. You are to behave like perfect hostesses for the night—do you understand?”

Madame Olga swept out, shutting the door behind her,

Hanna grinned at her sisters. “We’ll behave like perfect hostesses until we sneak away!” she whispered.

Magda felt excitement flutter through her tummy and she squeezed her sisters’ hands. “Then our final adventure to save Nordovia and Mother and Father will begin!”

Astrid Foss—if that’s even her real name—is very secretive. No one is sure where she lives, but it’s probably in a log cabin where she can take her huskies for a walk every morning then sit with a hot chocolate and dream up icy adventures. One thing is for sure…she loves ginger cookies and knitting complicated hats!

Monique Dong studied to become an animator, but soon realized she had a love for illustrating children’s books and has been following that dream ever since. Born in South Africa, she now lives in China with her husband and baby boy.