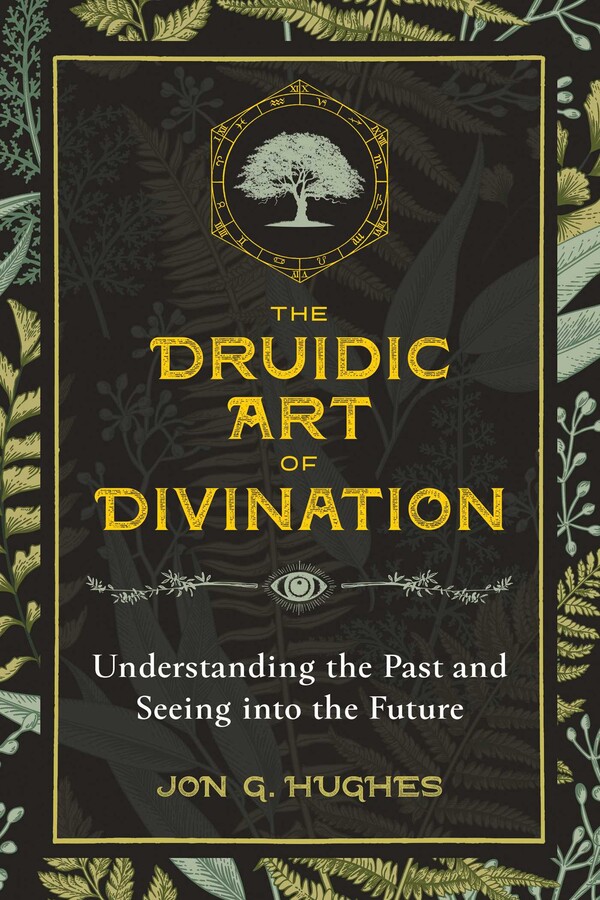 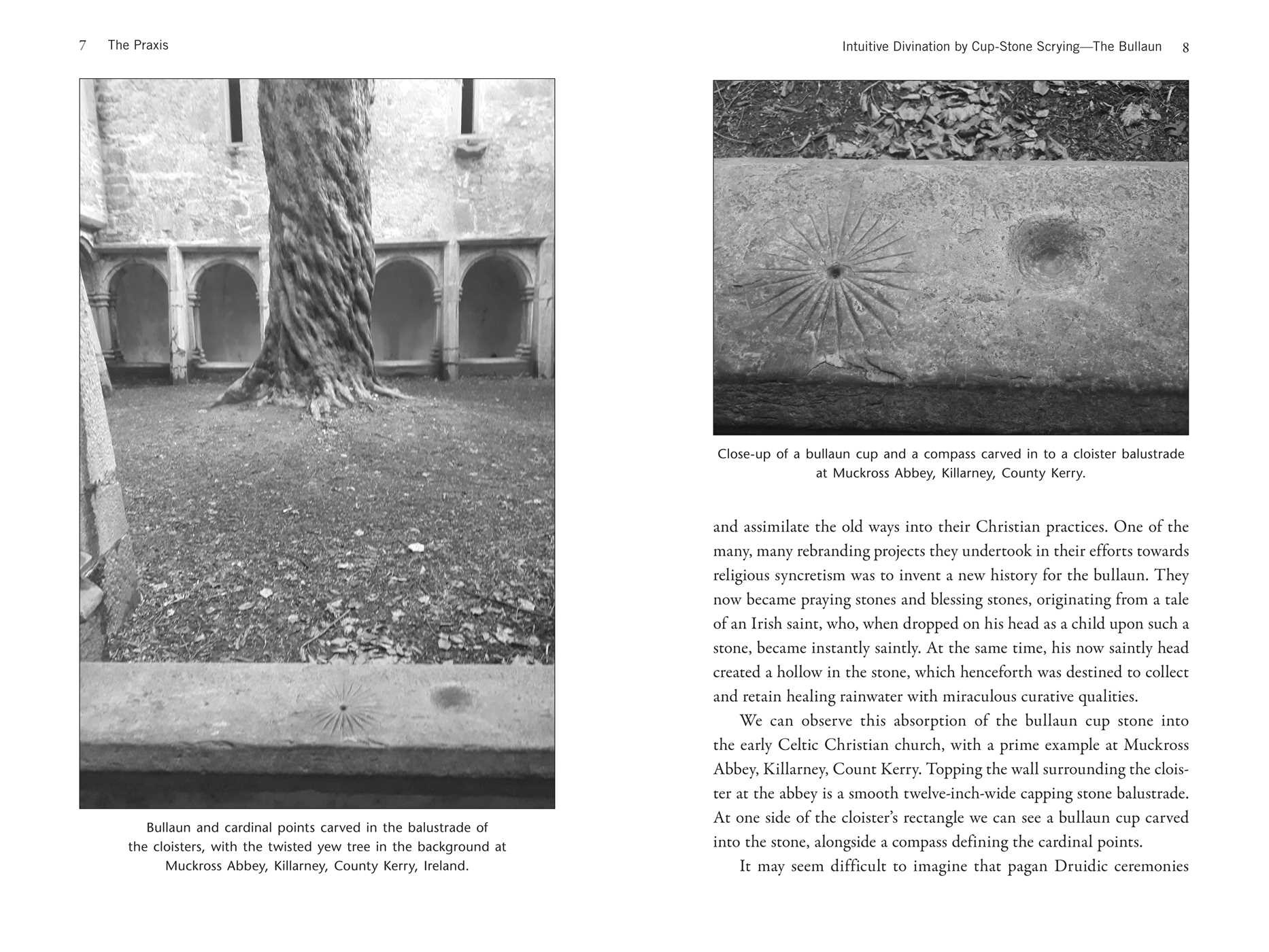 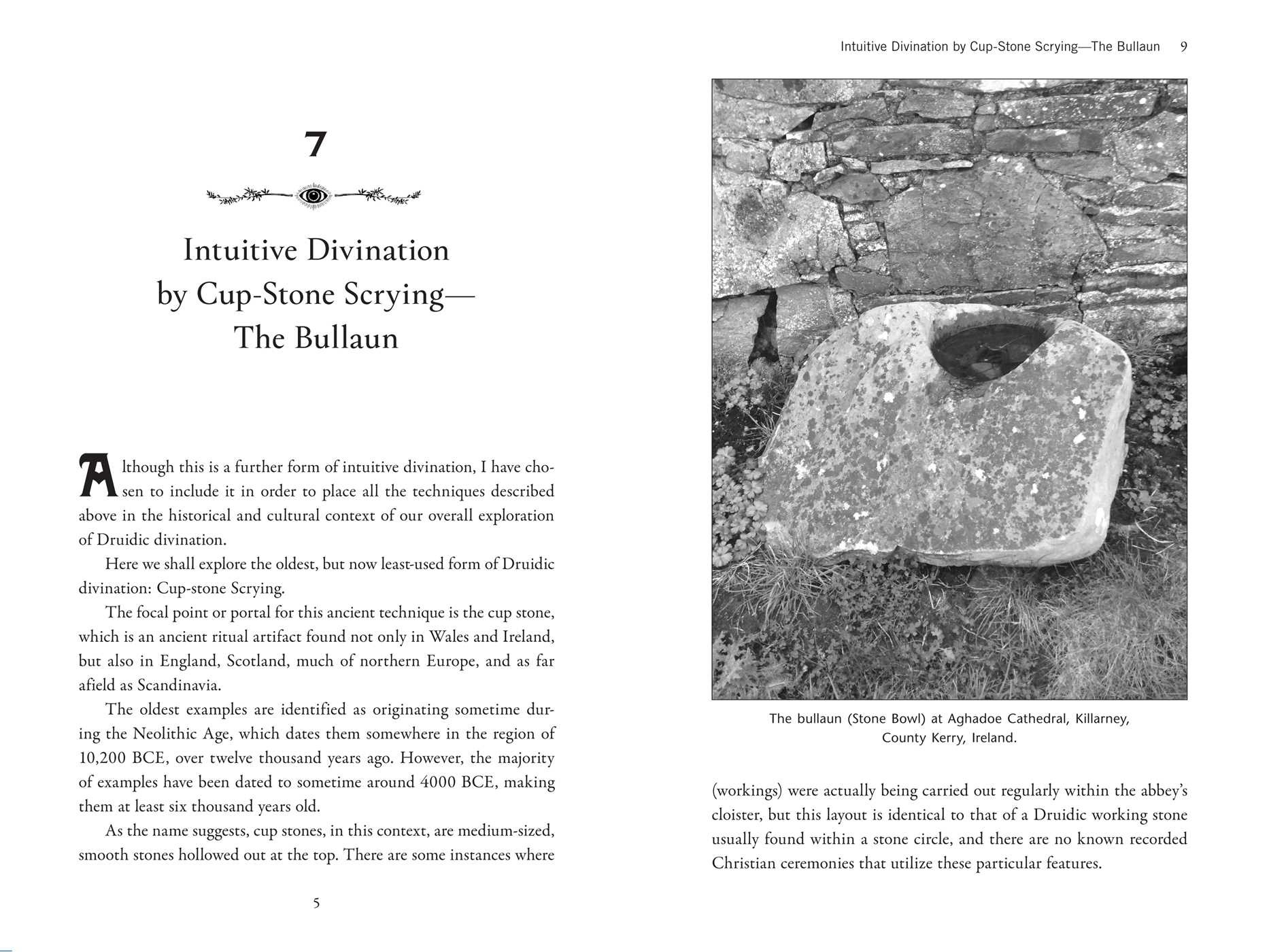 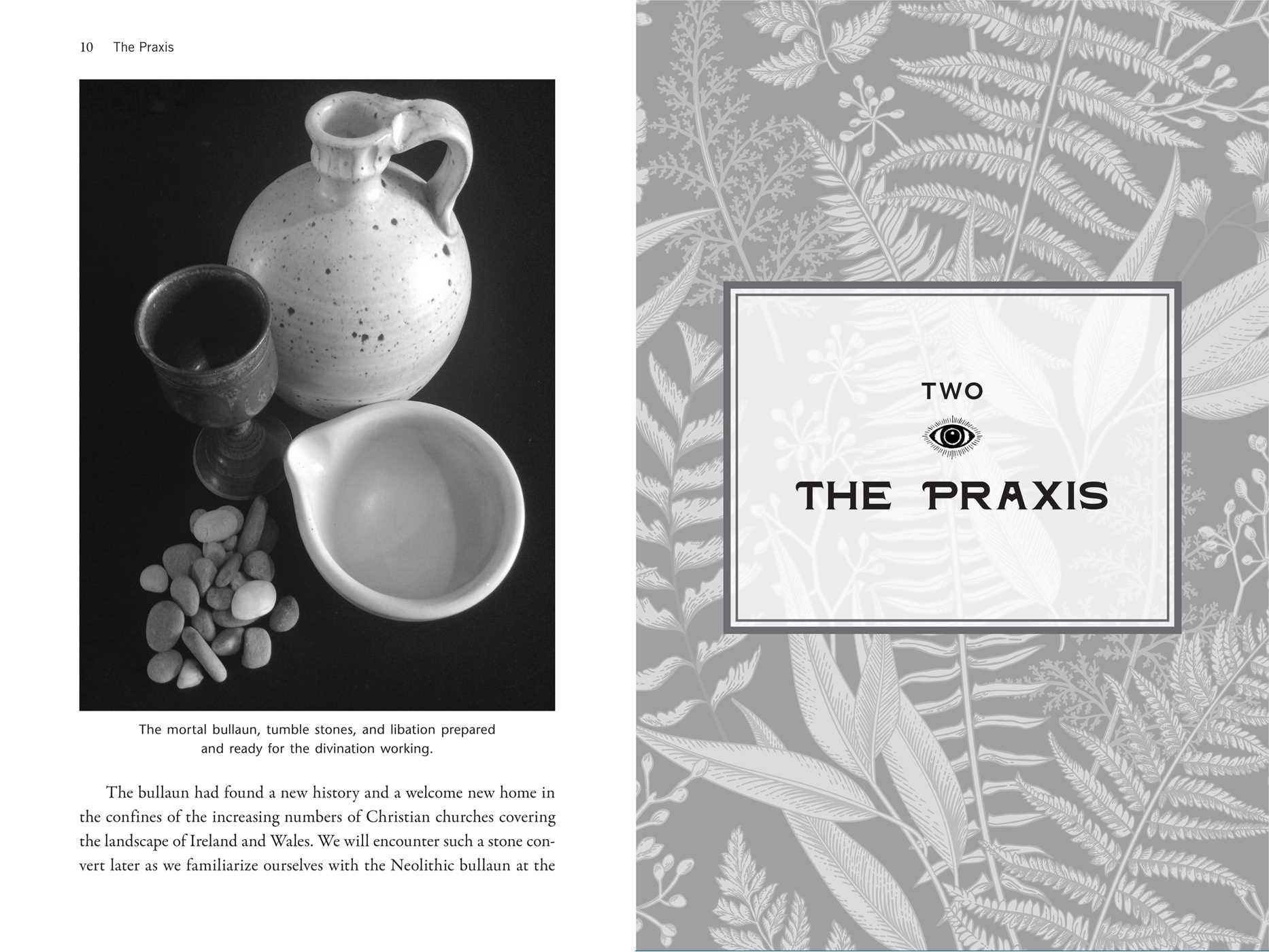 A complete guide to the techniques of the pre-Celtic Druids for understanding the past, present, and future

• Provides comprehensive instructions on how to craft and utilize your own magical instruments and tools, including botanical compounds, scrying wands, and slate speculum vitae

In this practical guide, Jon G. Hughes shares ancient secret Druidic techniques of divination passed down to him across five generations in an unbroken lineage of influential Welsh Druids.

Hughes explains the three forms of divination used by his tradition: interpretive divination, used by readers of the Sevens (small staves with engraved sigils); inductive divination, which includes instructions for reading the wind, reading smoke, and divination using water; and intuitive divination, whose tools includes cup-stones and slate mirrors for scrying. Providing step-by-step instructions for practices in each of the three forms, he offers a wealth of divinatory techniques and explains how to access the altered states of consciousness necessary to read time backward and forward. He also explores the crafting and use of all tools and mixtures the reader will need to perform each type of divination, including botanical compounds, scrying wands, and a slate speculum vitae, the “mirror of life.” He reveals how the prime function of divination in this school of Druidic lore is to gain insight into past, present, and future events through a process of internalizing them, akin to empathy, and then interpreting them.

By providing an understanding of pre-Celtic beliefs and clear instructions for Druidic practices, Hughes offers each of us the opportunity to begin our own practical experimentation and journey of discovery into the ancient art of Druidic divination.

Although this is a further form of intuitive divination, I have chosen to include it in order to place all the techniques described above in the historical and cultural context of our overall exploration of Druidic divination.

Here we shall explore the oldest, but now least-used form of Druidic divination: cup-stone scrying.

The focal point or portal for this ancient technique is the cup-stone, which is an ancient ritual artifact found not only in Wales and Ireland, but also in England, Scotland, much of Northern Europe, and as far afield as Scandinavia.

The oldest examples are identified as originating sometime during the Neolithic age, which dates them somewhere in the region of 10,200 BCE, over twelve thousand years ago.However, the majority of examples have been dated to sometime around 4,000 BCE, making them at least 6,000 years old.

As the name suggests, cup-stones, in this context, are medium-sized, smooth stones with a cup-shape hollowed out at the top. There are some instances where such stone hollows have been formed naturally, either by the motion of the sea or by river eddies, but the cup-stones we are considering are most definitely man-made for a specific use.

Known in the Irish tradition as “Bullaun” stones and in the Welsh tradition as “Cerrig Cwpan,” their significance (if not their precise use) extends from Neolithic times.

In general appearance, these stones may be thought to have been used as querns, for grinding grain, herbs, or similar food preparation, but the locations at which most of these Bullauns have been discovered, such as high rocky outcrops and other ritual sites, makes their use for domestic tasks such as food preparation look unlikely. More significantly, the oral tradition of Druidic lore and long-standing local folklore of the region attaches spiritual or magical significance to the Bullaun. One such belief in the Irish tradition, that persists to the present day, is that the rainwater collecting in a stone’s hollow has healing and curative properties, and history tells us that the ritual use of some Bullaun stones continued well into the Christian period and many are found in association with early Christian churches. It is also worth noting that a number of Recumbent Stones laying within Stone Circles in Ireland, Wales, and England have cup-hollows carved into their surface. These Recumbent Stones were/are the focal point of the many Workings and rituals that take place within the Circles, further illustrating the use of cup-stones and cup-hollows as essential ritual artefacts.

As the Christian Saints entered the territories of the pre-Celtic tribes and encountered the Bullaun being used in Pagan ritual, they “demonized” the stones and condemned their use. They quickly renamed them “cursing stones” or “tormenting stones” and drew them into the confines of the newly-built churches so that they could be closely supervised. Finding that their Christian converts still held on to many of their pagan beliefs and traditions the Christian fathers worked to adapt and assimilate the “Old Ways” into their Christian practices. One of the many, many “rebranding” projects they undertook in their efforts toward religious syncretism was to invent a new history for the Bullaun, which now became “praying stones” and “blessing stones,” originating from a tale of an Irish Saint, who, when dropped on his head as a child upon such a stone, became instantly Saintly and at the same time his now saintly head created a hollow in the stone which henceforth was destined to collect and retain healing rainwater with miraculous curative qualities.

We can observe this absorption of the Bullaun cup-stone into the early Celtic-Christian church with a prime example at Muckross Abbey, Killarney, Count Kerry. Topping the wall surrounding the cloister at the Abbey is a smooth 12 inch-wide capping stone balustrade. At one side of the cloister’s rectangle we can see a cup, Bullaun, carved into the stone alongside a compass defining the Cardinal Points.

It may seem difficult to imagine that Pagan Druidic ceremonies (Workings) were actually being carried out regularly within the Abbey’s Cloister, but this layout is identical to that of a Druidic Working Stone, usually within a Stone Circle, and there are no known recorded Christian ceremonies that utilize these particular features.

The Bullaun had found a new history and a welcome new home in the confines of the increasing numbers of Christian Churches covering the landscape of Ireland and Wales. We will encounter such a stone “convert” later as we familiarize ourselves with the Neolithic Bullaun at the ruins of Aghadoe Cathedral, the first Cathedral in Ireland, less than a mile from my home in County Kerry.

Many Bullaun were, and still are, used in conjunction with “cur(s)e” stones, small rounded stones placed inside the hollow of the Bullaun. These would be used by turning them while invoking an Intention (A Druidic Prayer) or, more often, while focusing the senses on a Divination Working. It would also be common to add essential oils, other oils, or even butter, to the hollow to create an unctuous, sensuous quality as the stones are turned within the Bullaun, relaxing the Diviner and strengthening their bond with the stones during the Working.

In Cornwall, UK, another area of Druidic influence, Bullaun have been discovered that are unmistakably womb shaped and have a distinct channel carved in the position of the birth canal. The Tradition tells of the use of these “womb stone” Bullaun in fertility rituals and birthing rites in Wales and Ireland as well as on the Cornish peninsula in the UK. But we will return our attention to the simple Bullaun and its cur(s)e stones as used in the Irish and Welsh tradition, and in particular to the ancient Bullaun mentioned earlier located at Aghadoe Cathedral.
Jon G. Hughes

Jon G. Hughes, author of Celtic Sex Magic, is part of a lineage of druids that has been practicing for five generations in a remote area of Wales. He is now teaching the tradition at his home in western Ireland and gives workshops and seminars throughout Europe under his Welsh name of Cynon. He is the director of the Irish Centre for Druidic Practices.

“The ancient art of Druidic divination can be intimidating, but Jon’s writing is informative yet wise as he explains the different systems used by the Druids. This book will leave you wanting to discover more.”

– Ambrosia Hawthorn, editor of Witchology Magazine and author of The Spell Book for New Witches

“The Druidic Art of Divination by Jon G. Hughes does a great service making his pre-Celtic Druid oral tradition available to those of us who are unlikely to find someone to teach it to us in person. I highly recommend it to those interested in some new divination techniques and/or learning more about Druidism."

“The Druidic Art of Divination (subtitled Understanding the Past and Seeing Into the Future) is a pleasure through and through. The title alone makes you want to pick it up and thumb through it. If you do, you'll be hooked, in a good way.”