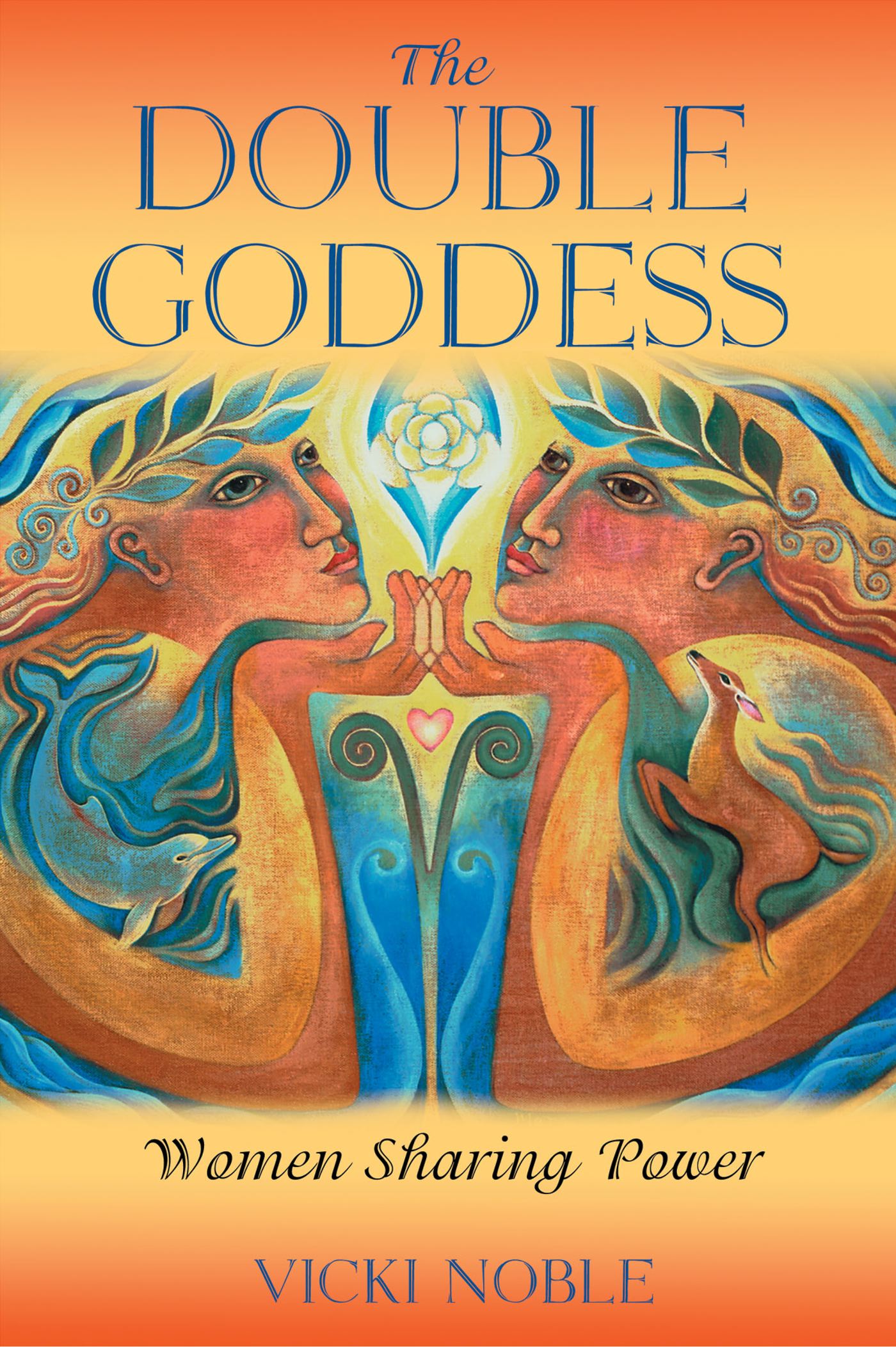 The first book to seriously study the double goddess that figures prominently in Neolithic and Bronze Age cultures.

• Offers an important symbol for modern women seeking to reconnect with their ancient, integral sense of self and wholeness.

• Presents an archetype for the sacred potential of female bonding, whether between mother and daughter, teacher and student, friends, or lovers.

Numerous figures depicting two women in intimate relation with one another, or as a single body with two heads, have been discovered in important centers of early civilizations such as Catal Huyuk and Gozo. These have been routinely ignored by scholars or dismissed as mere dolls with no sacred connotations whatsoever. Vicki Noble shows, to the contrary, that this double goddess is an ancient icon that can considerably expand our understanding of female sovereignty, as well as provide contemporary women with a way to reconnect with the integral sense of self and wholeness enjoyed by their ancestors.

Ancient Goddess religion was informed by the organic cycles of nature--the dual poles of Life and Death. The double goddess represents phenomena such as the Earth-Moon pair, the Upper-Underworld pair, the Summer and Winter poles of the seasonal year, and the dual poles of the female biological reality of menstruation and ovulation--the dark and the light. The double goddess in all her varied forms also depicts the vast array of potential relationships women can form with themselves and each other. This book is a celebration of an archetype that not only empowers women, but also teaches them how to share that power with each other.

The icon of the Double Goddess has the capacity to reinvigorate the autonomy of women and re-enliven (in a positive, nonpathological way) the innate bipolar state of consciousness that women have every right to proudly call our own. Although ancient matristic cultures (with their multi-faceted female icons of birth, death, and regeneration) have been reductively labeled "fertility cults," the work of archaeologist Marija Gimbutas has gone a long way toward rectifying this oversimplification. Still, most modern people who imagine the Goddess tend to see her only as the nurturing fertile Great Mother. Or if they see her other side, they demonize it as a vile ogress, bent upon human sacrifice, castration, and other practices which came into being during a late transitional time when patriarchal male-domination was beginning and things were becoming confused. Her ancient and integral complexity--the original dual nature of the Great Mother--often seems to overwhelm contemporary scholars, causing male scholars particularly to perceive her as ambivalent, whimsical, fundamentally frightening, and untrustworthy. It seems to them contrary or unfair that She who gives life can also take it away.
Yet it is this dual rhythm, this “two-sided” nature that most essentially characterizes the Great Goddess: life and death are two parts of the same whole picture, with little more than a revolving door in between. She is the Tao (pronounced “dao”), symbolized by a circle with two fish-like images swimming around and meeting eye to eye, one black and one white, each with the opposite color as its eye. (fig. 8) This is a stylized representation of the “Two-In-One,” the pregnant Great Mother with her capacity of giving birth to twins, both male and female, dark and light, which contain within themselves the seed of the other. These two aspects exist eternally in perpetual motion, one turning into the other in the ceaseless eternal return that expresses life on earth. In the absolute sense, it doesn't matter which side we're on at any given time; they're equal. We need not fear. The Goddess holds us in and is the whole, and we go back and forth between the two states; it is the function of her double priestesses to facilitate these transitions. . . .

Mirroring Her, Mirroring Time
A mural excavated at Çatal Höyük contains an iconic image that reflects the bipolar nature of the human female and of all existence, along with summing up the whole cosmology and chronology of the Goddess religion. The central image is the Goddess on the Mountain, an ancient icon of power and creativity. Many important mountains still carry their original female names, such as Nanda Devi (a form of Parvati, called “Goddess of Bliss”) in the Indian Himalayas, or the Goddess Annapurna (“She Who Is Filled With Food”), or the Goddess of Mt. Everest, the highest mountain in the world, known by Tibetans as “Lady Langma” (“Miyolangsangma”). (Bernbaum, 6-15) The Mountain Goddess in our painting is wearing a headdress and necklace (her power insignia and is contained within her tree-covered mountain shrine.
The enclosed shrine or “cave niche” is cleverly created by the "negative" red space that is actually, when you look closer, two boars (or perhaps bears) whose faces meet above her head. Inside the red space of the two boars are portrayed two leopards whose faces also meet at her face. Below the leopards and boars are her two priestesses or Queens--the sacred sisters, the Double Goddess in human form--with arms holding or emphasizing their bare breasts and wearing characteristic scalloped or fluted skirts that reappear in Malta and Crete thousands of years later. Flanking the two priestesses and facing outward are two more leopards or lionesses who seem to be guarding the women and could be their alter egos; and in the space of their bodies, created by dark on light space, are images of vultures. In the center of the two priestesses, creating their shared "girdle," is the head of an aurochs (one of the first domesticated animals, similar to an ox) with its horns stretching out and linking the women together. Beyond the cats are the earliest known Double Axes, the original emblem of the Double Goddess and the sovereignty of the female, creating a powerful symbolic border for the whole scene.
What an awesome composite image this Mountain Mother and her Double Goddess make! And even more significant is the way in which the ancient symbols and images of Çatal Höyük are stylized and reproduced in the tribal rugs (kilims) still woven by the women of Turkey, Afghanistan, and other nearby regions today. Even though the populations are now Islamic, the kilims are still woven in the same artistic style as this ancient mural, where the negative spaces create images that give a complexity to the artwork and cause your eyes to have to continually refocus and rediscover new images in what looked like blank or contrasting space. Kilims often have borders of Double Goddesses as well as more central female images in mirror reflection and otherwise.
In a way, the form of the expression and the content are exactly the same: The Double Goddess (in art or women) represents the way in which the twinning motif is a mirror reflection, back to back, of something that isn't really its own opposite (as in different), but more like a mirror reflection of it (sameness); yet the dual poles dance. The dark pole of the lunar, menstrual cycle can't actually be separated out from the ovulation end of the month, and this truth is the nugget of ancient Goddess wisdom that later became codified into other traditions such as Taoism. This quintessentially female divine duality is understood to be a verb, a process of being and becoming, rather than a fixed entity.
Vicki Noble

"Vicki's voice is unique and authentic in the women's spirituality movement."

"Noble's research is painstakingly detailed and will be sure to engage readers interested in women's spirituality."

“Vicki Noble rekindles the forgotten lineage of female-to-female transmission--the sacred flow of energy between women that has never been possessed by the patriarchy nor by any male.”

“A truly international collection of artifacts reflecting the power of ancient women . . . beautifully places each image in its historic context, affording an understanding of these ancient matristic cultures.”

– JEANNINE DAVIS-KIMBALL, PH.D., Center for the Study of Eurasian Nomads

“Vicki Noble’s observation that, in many instances, matriarchal figures are depicted as bonded with other women in groupings of two or more . . . is original and brilliantly thought-provoking. She has, in fact, opened a new window on prehistoric societies.”

– EVA KEULS, PH.D., author of The Reign of the Phallus

"Vicki is herself a great healer and is very experienced in how women's "heat," magnetically flowing energies finely tuned to each other, can bring about miracles."

“I highly recommend this book as an essential piece of Goddess scholarship and religion.”