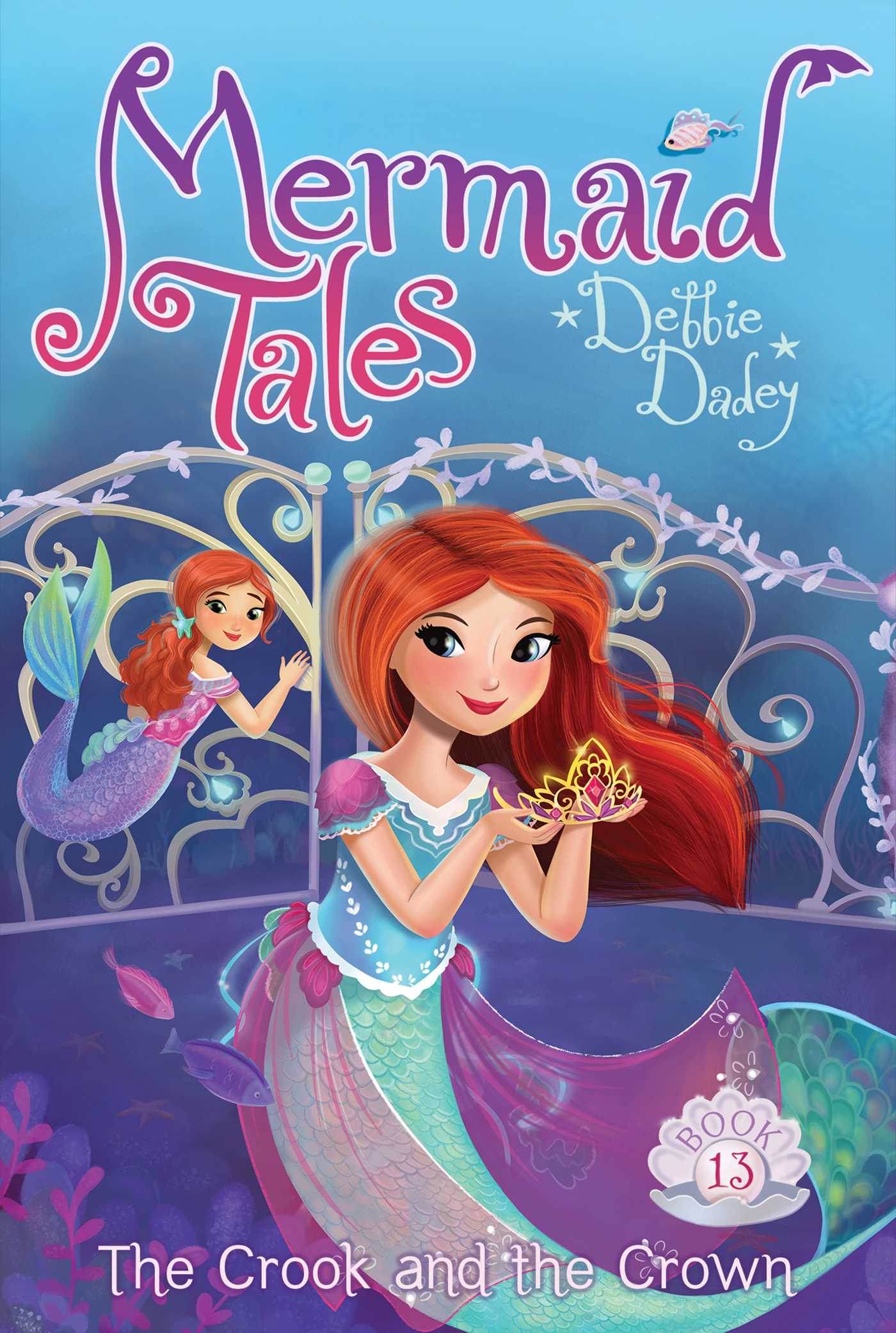 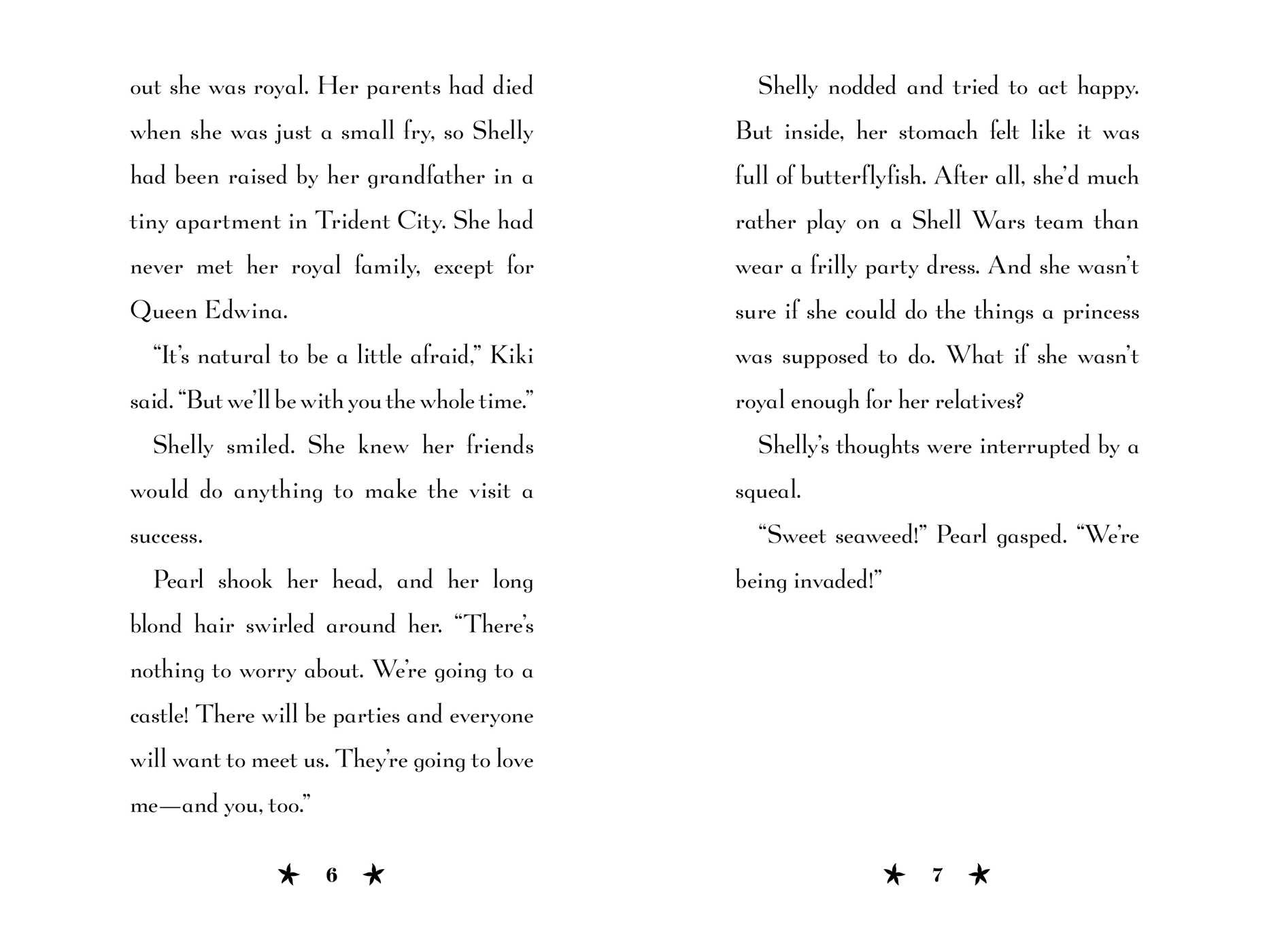 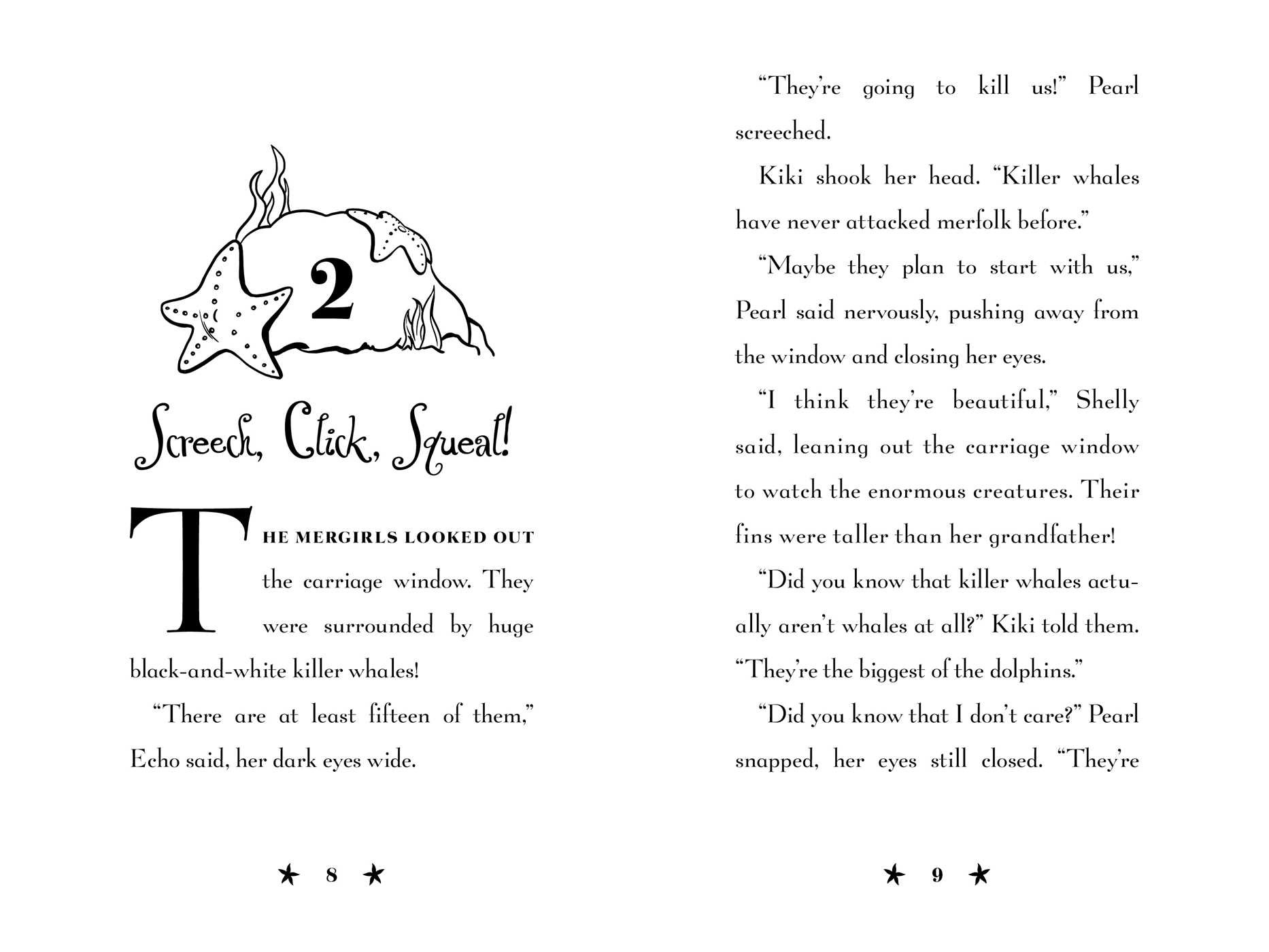 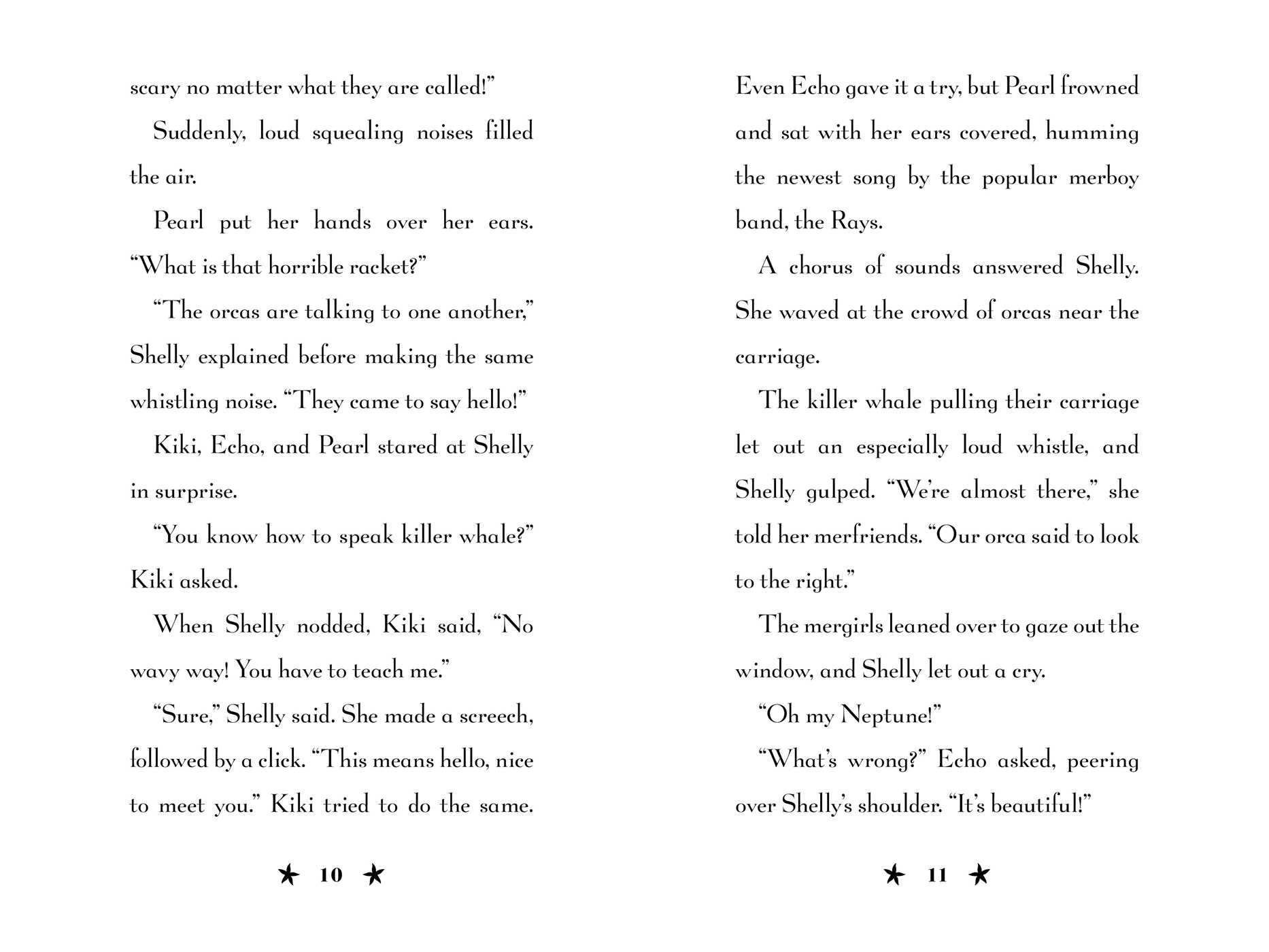 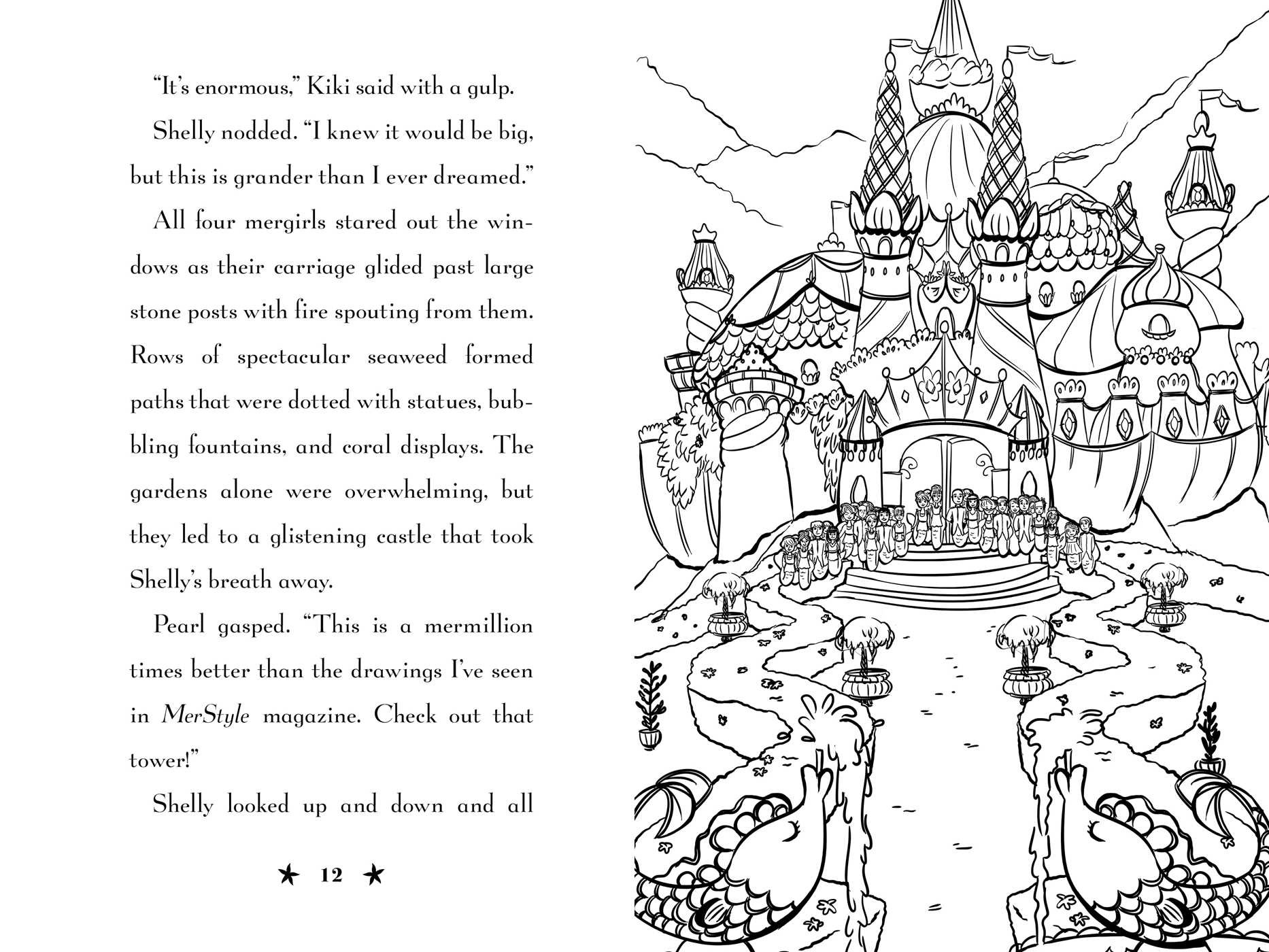 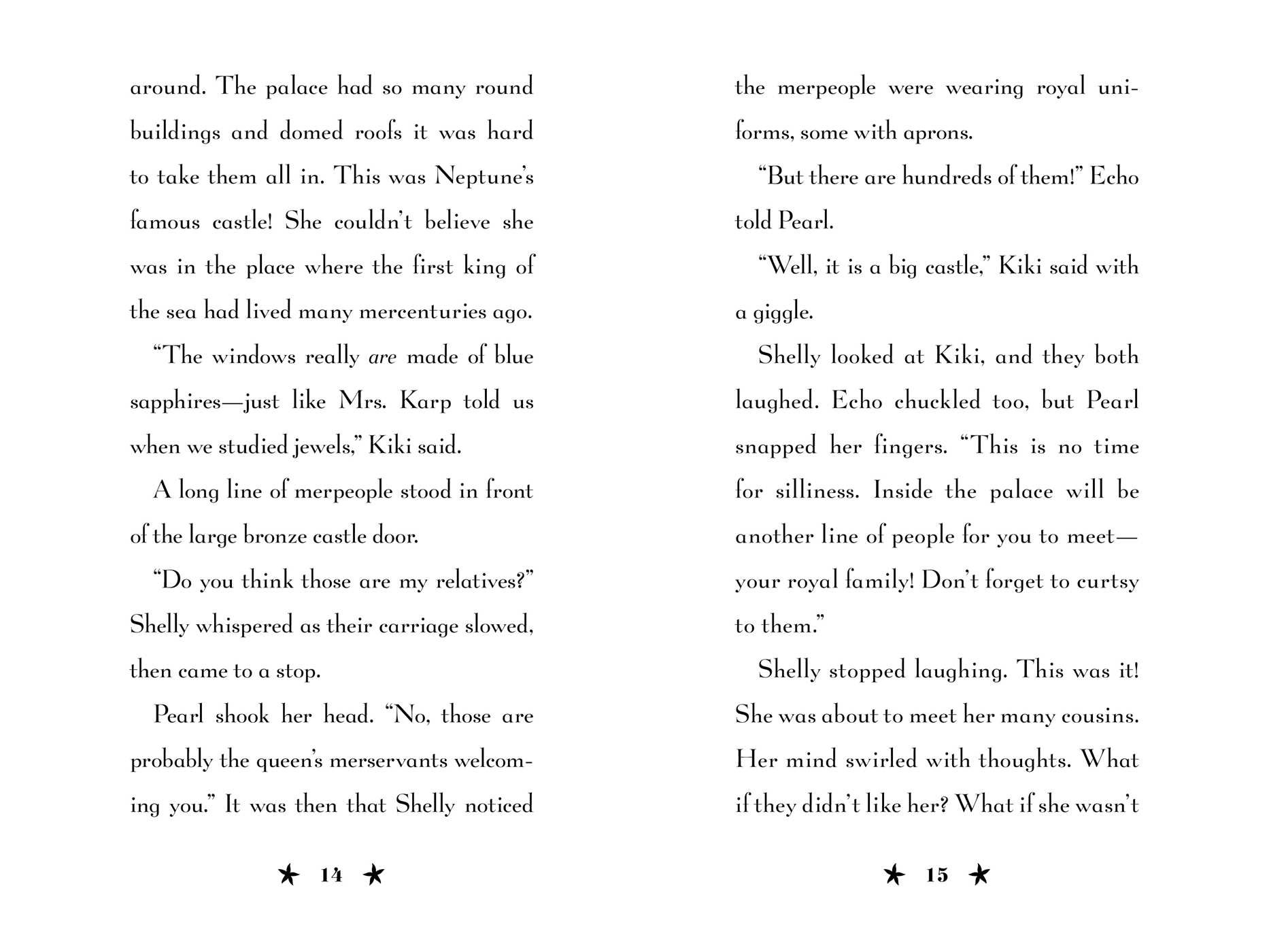 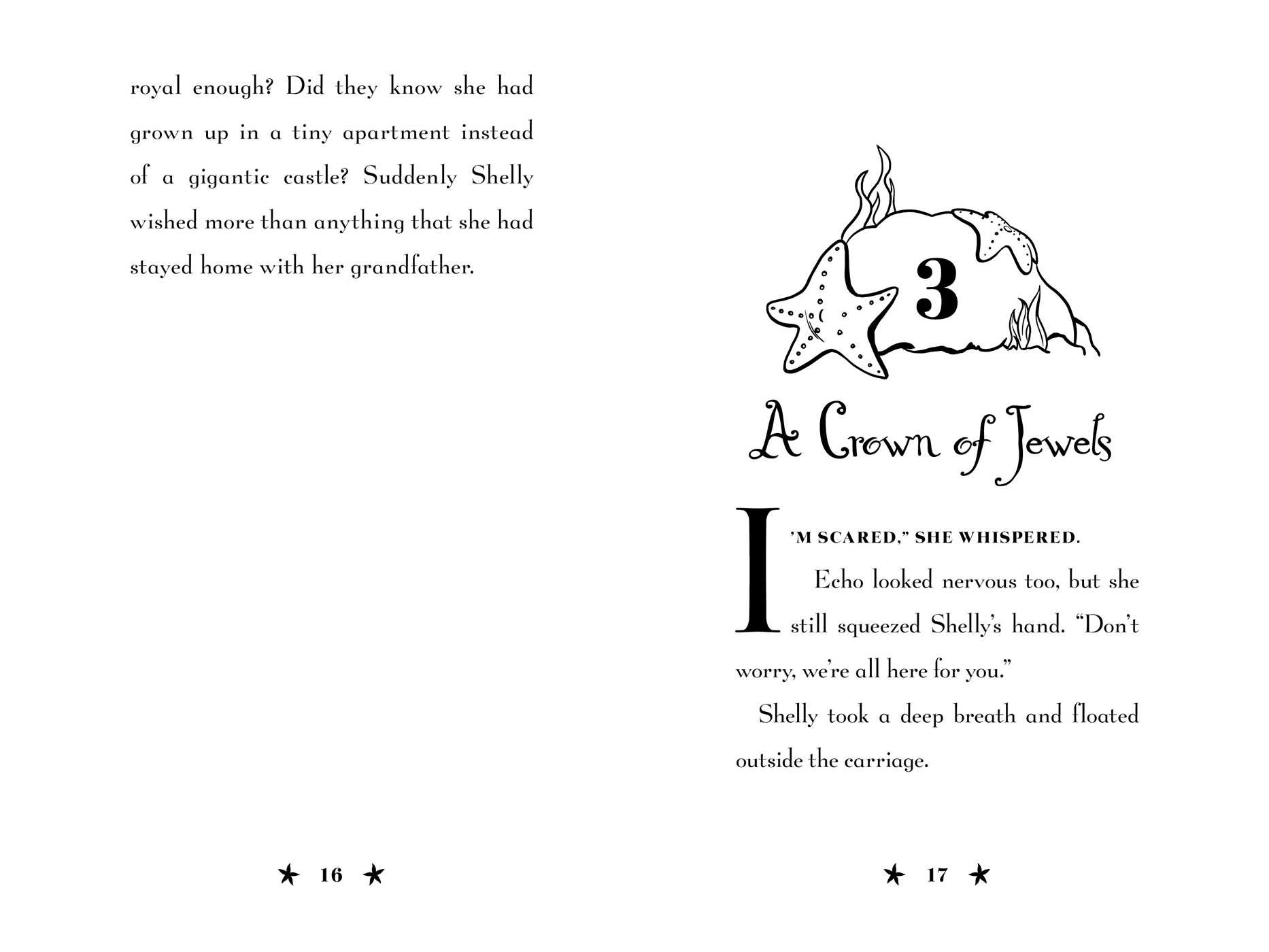 Shelly Siren and her friends visit King Neptune’s royal castle and attend their first ball in this Mermaid Tales adventure.

Shelly, Echo, Kiki, and Pearl are spending their school vacation at Neptune’s castle! Shelly’s aunt, Queen Edwina, has invited the girls to stay for a whole week, and while they’re there the girls can’t wait to visit the Royal Orca Museum, see the Palace Library, ride seahorses, and maybe even attend a royal ball.

Shelly is nervous about meeting her royal family, especially since she’s never felt like a princess. But when she arrives at the castle, she is welcomed with curtsies, bows, and sea flowers. Queen Edwina even gives Shelly a sparkling tiara that she once wore as a young princess.

Just as Shelly starts to relax and have fun, the tiara disappears and the girls have to find it before the queen finds out! The mergirls have a real mermystery on their fins! But will they be able to figure out who took the tiara before Shelly’s royal visit turns into a royal disaster?

Fit for a Princess
OH MY NEPTUNE! QUEEN Edwina sent her own royal carriage for us!” Pearl squealed.

Shelly Siren and her friends Pearl, Echo, and Kiki stood outside the Trident City People Museum as a large killer whale stopped beside them. The orca was pulling a sparkling shell carriage. Two tailmen wearing bright-blue coats with silver sashes lowered a glittering step from the carriage onto the ocean floor.

Another tailman, also wearing a blue coat, but with a gold sash, said in a loud voice, “Princess Shelly, it would be my honor to escort you and your servants to Neptune’s Castle.”

Pearl stuck her nose up in the water and frowned at the tailman but didn’t complain anymore.

Shelly hugged her grandfather good-bye before floating up the carriage’s diamond-covered stairs. The inside was just as beautiful as the outside. Blue gems lined the ceiling and the seats. Shelly could see her reflection shining in the walls.

“Ooh,” Pearl said, running her hand over the jeweled seats. “I’ve heard of this. It’s aquamarine and very rare in the ocean.” She turned to Shelly. “This is a carriage fit for a princess! Good thing you are one!”

Shelly smiled, but inside she sure didn’t feel like a princess! Still, her great-aunt was Queen Edwina of the Western Oceans, and that made Shelly royalty.

As the carriage sped away, Shelly waved to Grandfather Siren until she couldn’t see him anymore. Then she sat back with a sigh. This was it! She was actually going to visit Neptune’s Castle—the palace named for the very first king of the sea. When the queen had suggested that Shelly bring her friends to the castle during a school vacation, it had seemed exciting. Now it just felt scary.

Echo pushed back her dark, curly hair and turned to Shelly. “You’re so quiet! Are you feeling all right?”

Shelly shrugged her blue tail. “I’m just nervous about visiting the castle. I’ll be meeting all my cousins for the first time.”

Even though her mother had been a princess, Shelly had only recently found out she was royal. Her parents had died when she was just a small fry, so Shelly had been raised by her grandfather in a tiny apartment in Trident City. She had never met her royal family, except for Queen Edwina.

“It’s natural to be a little afraid,” Kiki said. “But we’ll be with you the whole time.”

Shelly smiled. She knew her friends would do anything to make the visit a success.

Pearl shook her head, and her long blond hair swirled around her. “There’s nothing to worry about. We’re going to a castle! There will be parties and everyone will want to meet us. They’re going to love me—and you, too.”

Shelly nodded and tried to act happy. But inside, her stomach felt like it was full of butterflyfish. After all, she’d much rather play on a Shell Wars team than wear a frilly party dress. And she wasn’t sure if she could do the things a princess was supposed to do. What if she wasn’t royal enough for her relatives?

Shelly’s thoughts were interrupted by a squeal.

Debbie Dadey is an award-winning children’s book author who has written more than 150 books. She is best known for her series The Adventures of the Bailey School Kids, written with Marcia Thornton Jones. Debbie lives with her husband, her children, and three dogs in Sevierville, Tennessee.

Tatevik Avakyan has illustrated many books for children, including the Mermaid Tales series.