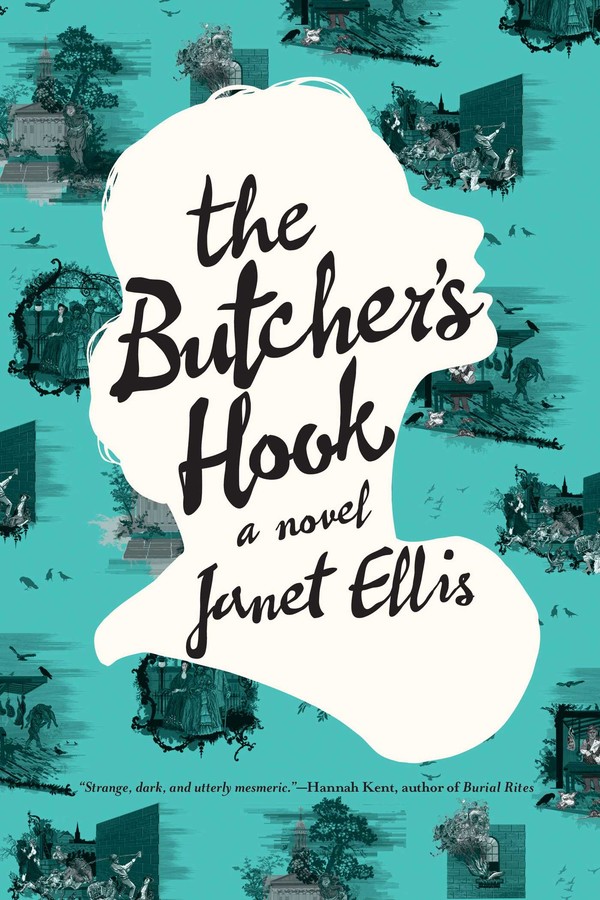 Set in Georgian London, the dark and twisted tale of a young girl who determines to take her destiny into her own hands—no matter the cost.

At nineteen, Anne Jacob is awakened to the possibility of joy when she meets Fub, the butcher's apprentice, and begins to imagine a life of passion with him. The only daughter of well-to-do parents, Anne lives a sheltered life. Her home is a miserable place. Though her family want for nothing, her father in uncaring, her mother is ailing, and the baby brother who taught her to love is dead.

Unfortunately her parents have already chosen a more suitable husband for her than Fub. But Anne is a determined young woman, with an idiosyncratic moral compass. In the matter of pursuing her own happiness, she shows no fear or hesitation. Even if it means getting a little blood on her hands.A vivid and surprising tale, The Butcher's Hook brims with the color and atmosphere of Georgian London, as seen through the eyes of a strange and memorable young woman.

Janet Ellis trained as an actress at the Central London School of Speech and Drama. She is best known as a presenter on the popular British television show, Blue Peter, and contributes to numerous radio and television programs. The Butcher's Hook is her first novel, and it has been long listed for the Desmond Elliot Prize.

"The sonnets of John Donne provide a brooding counter-point to the gruesome turns of this nervy historical novel. Trained as an actor, the author reveals that pedigree in wry winks to Shakespeare and dramatis personae evocative of comedia dell’arte."

"Although it lulls the reader into complacency using well worn tropes, The Butcher’s Hook then rips them apart to reveal something far darker."

"Ellis conjures a dark, grimy world rife with thwarted desires and relentless death. With a keen eye for tortured reasoning and twisted motivations, Ellis draws bewitchingly disturbed souls. Cinderella turns the tables in this gruesome yet engrossing fairy tale that begs for a sequel."

"This author remains one to watch. She has a sharp eye and a sharper wit. Ellis has a public personality of great charm, and a good deal of this gets into her writing—she revels in the historical details, has a grasp of pace and knows how to keep her audience hooked."

"This is a dark, weird, gloriously feminist story of a girl in 1763 pushing against the limits of her role and a dark love story."

"Confronts the darker aspects of femininity. The unwillingness of anyone in the story to view Anne as more emotionally complicated than a child leads her self-discovery to run amok, and Ellis to explore the stifling effects of such repressive views of sexuality. Vivid imagery and focus on grisly detail add a macabre beauty to a stirring story."

"The Butcher's Hook doesn't read like a first novel—it is a high-finish performance. Its heroine is an 18th-century teenage girl, who starts demurely although her sex drive turns out to be anything but demure. You need to be braced for violence to rival any Jacobean tragedy: The Butcher's Hook will hook you."

"In her first novel, Ellis weaves a darkly psychological tale set in the rough-and-tumble, vulgar, colorful London of Moll Flanders and Tom Jones. Evoking pity, abhorrence, admiration, and disgust, this title is strongly recommended for readers with a love of Georgian literature and Georgian London and those intrigued by the complexity of the human psyche."

"Ellis has created a surprising blend of psychological thriller and revenge tragedy in her debut novel. But from it emerges an unsettling portrait of a deeply damaged individual whose capacity for creating mayhem is timeless."

"A shocking and strong first novel. Though this dark, gothic novel takes place the better part of a century before Victorian-era Oliver Twist and Great Expectations, there’s something a little Dickensian about Ellis’ writing: the sharp patter, entertaining dialects and gritty, grimy, visceral descriptions that make the texture and smells of Georgian London feel entirely present."