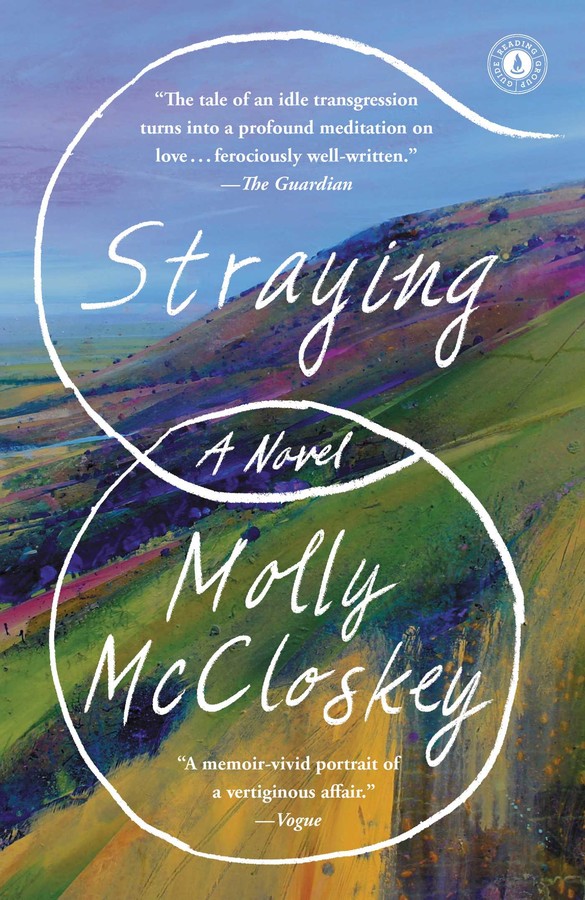 By Molly McCloskey
LIST PRICE $12.99
PRICE MAY VARY BY RETAILER

“A memoir-vivid portrait of a vertiginous affair” (Vogue) for readers of Jenny Offill, Garth Greenwell, and Anne Enright, an unforgettable novel about a young American expat who settles in Ireland, marries, and lives through the consequences of an affair—by “an extravagantly gifted writer” (Rachel Cusk).

In this “humane and lucid novel” (The New York Times), Alice, a young American, arrives in the West of Ireland with no plans and no strong attachments. She meets and falls in love with an Irishman, quickly marries him, and settles down in a place whose customs are unfamiliar. And then, in the course of a single hot summer, she embarks on an affair that breaks her marriage and sets her life on a new course.

Years later, in the immediate aftermath of her beloved mother’s death, Alice, having worked in war zones around the world, finds herself back in Ireland, contemplating the forces that led her to put down roots and then tear them up again. What drew her to her husband, and what pulled her away? Was her husband strangely complicit in the affair? Was she always under surveillance by friends and neighbors who knew more than they let on?

“Short, intense, and emotionally precise” (Star Tribune, Minneapolis), Straying is at once a “ferociously well written” (The Guardian) account of passion and ambivalence and an exquisite rumination on the things that matter most.

By clicking 'Sign me up' I acknowledge that I have read and agree to the privacy policy and terms of use. Free ebook offer available to NEW US subscribers only. Offer redeemable at Simon & Schuster's ebook fulfillment partner. Must redeem within 90 days. See full terms and conditions and this month's choices.
This reading group guide for Straying includes an introduction, discussion questions, and ideas for enhancing your book club. The suggested questions are intended to help your reading group find new and interesting angles and topics for your discussion. We hope that these ideas will enrich your conversation and increase your enjoyment of the book.

Intimate and quietly stunning, Straying is the story of Alice, a young American raised by a single mother who finds herself in the west of Ireland in the late 1980s, where she meets and marries an Irishman. One summer, a chance encounter with a charismatic playwright leads to an affair that upends her life. Years later, having worked in war zones around the world, and following her mother’s death, Alice returns to Ireland and confronts her past. Straying is a searing account of passion and ambivalence and a rich exploration of how we define love and desire, family and home.

1. In the very beginning of the book, Alice immediately admits to having an affair. Why does she share this information right away? What kind of relationship is she trying to establish with the reader?

2. On page 26 Alice says, “For as long as I could remember, there’d been a vague disquiet in me, as if I lived in the shadow of some humiliation whose particulars I could not recall.” What does she mean? How does this revelation explain some of Alice’s actions?

3. What do you think about the structure of the novel? Why does the author switch between past and present?

4. On page 37, Alice says that she remembers impressions, images, and people “who were more interesting as symbols than as individuals.” What does she mean? What does this reveal about her?

5. Alice very much admires and respects her mother, particularly her decision to be a single mother when she got pregnant by a man she didn’t love. How does Alice’s relationship with her mother influence her decisions? What impact does Alice’s father have?

7. What do you make of Alice’s job working in war zones around the world? How does it change your opinion of her? What purpose does Alice’s relationship with her colleague Harry serve?

8. Why do you think Alice decided to cheat, and how does she rationalize her decision? Read and discuss from “I’d wanted to gather him in” on page 116 to “I must’ve thought about little else that summer” on page 117 in which Alice reflects on what she wanted from the affair.

9. Why do you think Molly McCloskey wrote the novel in first person? How would it have been different if written in third person?

10. Why do you think Alice must constantly push boundaries, first with her marriage and then with her relationship with Cauley?

12. Why do you think Eddie showed up at Kevin’s to retrieve Alice? If he already knew she was having an affair, why didn’t he broach the subject sooner?

13. Why do you think Alice wanted to return home and revisit this moment in her life?

14. How does your impression of Alice change throughout the novel? Were you able to understand her motives?

1. Compare other beloved novels involving extramarital affairs—Desperate Characters by Paula Fox, Dept. of Speculation by Jenny Offill, The Forgotten Waltz by Anne Enright, or Brick Lane by Monica Ali, for example. What was different or similar about this novel? Why do you think people are interested in reading about affairs?

2. Imagine Staying is being made into a movie: whom would you cast for the lead roles? 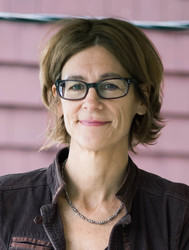 Molly McCloskey is the author of four works of fiction and the memoir Circles Around the Sun: In Search of a Lost Brother. Straying is her first work of fiction to be published in the US. She has served as writer-in-residence at Trinity College Dublin and University College Dublin, and in 2013, she held the Jenny McKean Moore Fellowship at George Washington University in Washington, DC. In 2015, she served as a judge for the PEN/Faulkner Award for Fiction. She is a citizen of both Ireland and the US, and she now lives in Washington, DC.

"A memoir-vivid portrait of a vertiginous affair."
—Vogue

"Short, intense and emotionally precise ... Such is McCloskey’s powerful control of the novel and meticulous, economical observations, that in little more than 200 pages she can show the exact nature of a life not wasted, but not fully inhabited — Alice ends up with no settled home as an aid worker for refugees — as well as the character of one marriage, of an affair and, not least, of the transformation of Ireland herself."
—Minneapolis Star Tribune

"This dual citizen of Ireland and America doesn’t simply decode cultural mores, or love, or the way grief unfurls over decades. She translates those abstractions into a language all can understand, and in so doing turns her readers into code-breakers of the heart."
—Florida Times-Union

"This slow-burning novel . . . is a moving meditation on rootlessness and love. . . . McCloskey is a keen, sympathetic observer; her tight, controlled prose meticulously details Alice’s honest consideration of her flaws and desires. The melancholic complexity of Alice’s very human struggle carries this elegant novel with no easy answers."
—Publishers Weekly

“In Straying, Molly McCloskey gives us the moving portrait of a young woman adrift through a troubled world and in her own heart. Discovering that the unknowable desires and passions that move her are somehow related to those that drive people to war and conflict, she, and the reader, move closer to a difficult wisdom.”
—Viet Thanh Nguyen, author of The Sympathizer

"Straying is a powerful and deeply affecting novel in which the psychology of love and the anatomy of adultery are forensically examined. In writing that sparkles with intelligence and insight the ordinary moments of everyday existence are charged with a beauty and tenderness that render them only just bearable. It is a profound reflection on love, loss, mortality and how certain people in our lives – lovers, mothers, friends – alter us, as we slowly, painfully, try to beget our better selves."
—Mary Costello, author of Academy Street and The China Factory

“Straying is as gripping as a memoir and as intimate as a poem. Molly McCloskey has written a novel that is both urgent and reflective, a tender and unsentimental exploration of love’s dark corners. It is brilliant: her finest book yet.”
—Anne Enright, author of The Green Road

“This is a short but powerful novel about love—love for a mother, love for a husband, love for a lover.  The narrator knows her feelings but not quite her desires; she is passionate, wonderfully attentive but confused.  Straying will be read for many years to come for its wisdom and precision.”
—Edmund White

“I loved Straying.  It is absorbing, tense, and beautifully written.  Molly McCloskey has written a wonderful novel.”
—Roddy Doyle

“Molly McCloskey’s prose has such immense authority, precision and seriousness, and her storytelling is powered by an exquisite sense of writerly tact as much as by the ability to drop your jaw. This shimmering, beautiful, restless work will stir recognitions without seeming to try.  If you’ve ever fallen in love with someone you shouldn’t have fallen in love with – as who hasn’t, once or twice, and that’s if you’re lucky - be prepared to encounter the novel as mirror, her finest book to date, a triumph.”
—Joseph O'Connor, author of Star of the Sea

"The tale of an idle transgression turns into a profound meditation on love in this ferociously well-written novel ... McCloskey writes with shattering insight on loss, and the way that it can make us feel tender towards the world."
—The Guardian

"Elegiac and wistful in its backward gaze, it’s a novel nonetheless light in its touch. Fans of Anne Enright will find much to admire and enjoy."
—Daily Mail

"The writing’s the thing. Oh, the writing . . . McCloskey is the master of the metaphor. There are impressive moments on almost every page."
—Business Post

"I was left enchanted, meditative and a little pink and raw from the bracing honesty and precision."
—Headstuff

“McCloskey writes with such care and craft; every description of the landscape of the west and the life of her captivating narrator is imbued with poetry and truth. Straying is fresh and raw and completely entrancing.”
—Sara Baume, author of Spill Simmer Falter Wither

“Wherever one has strayed, reading these pages one feels in a familiar place, almost as though one is reading the story of one's own betrayals, one's own loneliness, one's own plunge into the ocean of life."
—Sheila Kohler, author of Once We Were Sisters

“Molly McCloskey is an extravagantly gifted writer…McCloskey demonstrates a beautiful, confident, metaphorical prose, always attentive to the concrete, and yet capable of sustained interior illumination. She is a writer who deserves to be widely read.”
—Rachel Cusk, The Telegraph

“Molly McCloskey is one of Ireland’s finest writers.”
—Colum McCann

“Every once in a while, a writer's voice hits such a clear note, the resulting book has the kind of sweetness that makes you hold it in your hands a moment before finding a place for it on your shelves.”
—Anne Enright, The Guardian

By Molly McCloskey
LIST PRICE $12.99
PRICE MAY VARY BY RETAILER