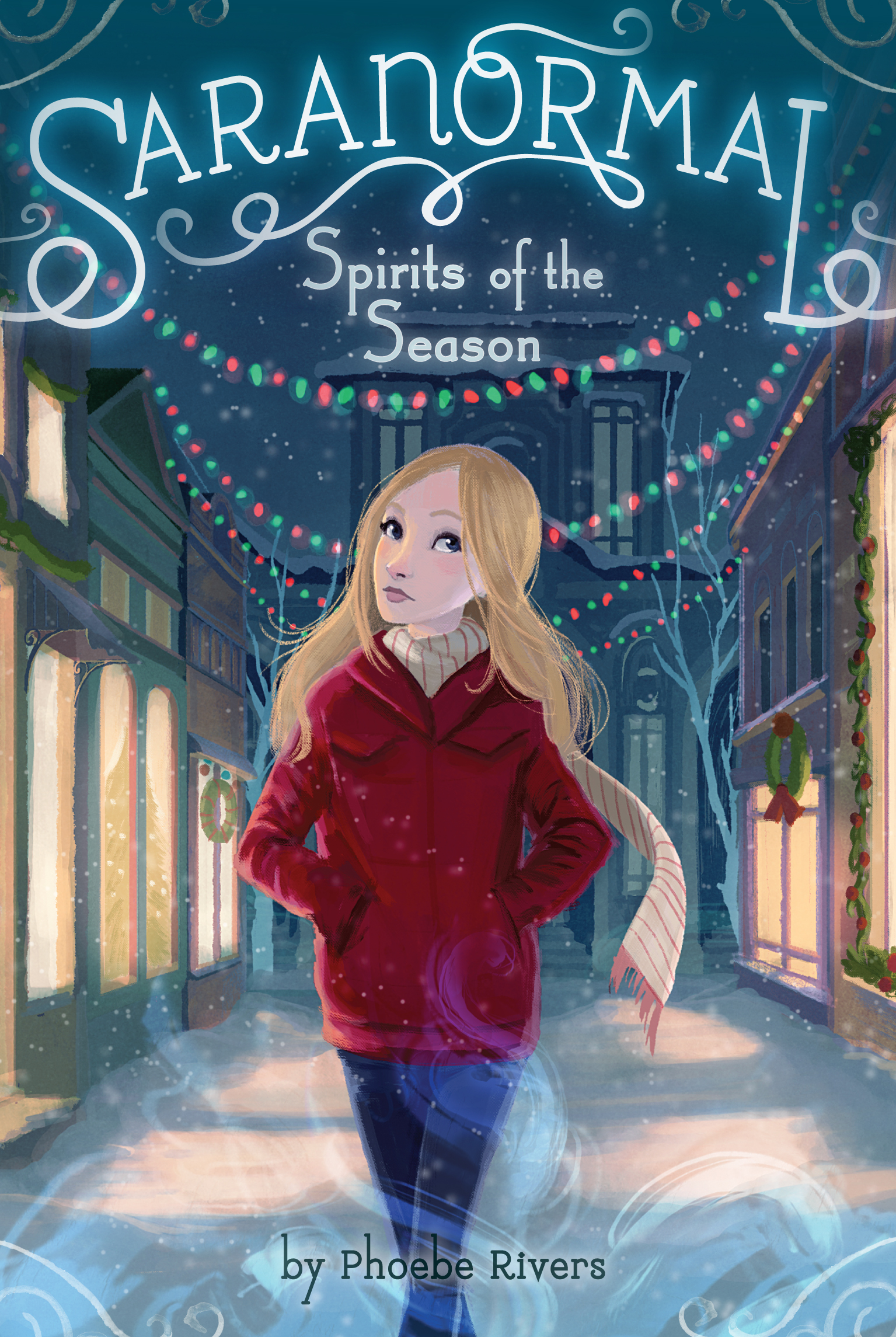 Book #4 of Saranormal
By Phoebe Rivers
LIST PRICE $6.99
PRICE MAY VARY BY RETAILER

It will be a Christmas Sara will never forget as secrets about who she is—and why she has powers—are revealed.

It’s Christmastime in Stellamar, which means the streets are buzzing with holiday shoppers—and ghostly activity. Sara is busy trying to figure out how to reunite Lady Azura with the spirit of her lost love…and wondering what to buy Jayden for Christmas! For the first time, Sara really feels like she belongs somewhere. But there are still secrets to be revealed: Why did she and her dad really move across the country? Why does she have these paranormal powers? How much does her father know? And who is Lady Azura, really?
Sara’s about to get some serious answers, but in her paranormal world, nothing is ever easy, and there are always more doors that need to be unlocked. And once all the new secrets are revealed, will anyone still be standing by her side?

I laughed the kind of laughter that takes over your body and makes you feel as if you have to pee.

“Do you dare me to wear this to school?” Lily Randazzo teased. She posed with one hand on her hip, as if she was being photographed for a fashion magazine. But no fashion magazine would feature the ridiculous frilly patchwork apron or the silly knit cap covered with dozens of green and red pom-poms she was wearing.

“You would never,” I said, still laughing. “It goes beyond all acceptable ugly.”

“That’s what makes the combo so great,” Lily said, pulling off the hat and apron and placing them back on the store’s table. “It’s so repulsive that it crosses that line into cool.” She eyed them again. “Or not.”

“Not,” I agreed. I’d already decided to come back later and buy the ugly hat for Lily. She’d laugh on Christmas morning when she opened it. Our inside joke.

I had a best friend and inside jokes. Unbelievable. Everything was so different here in Stellamar.

“Sara, what am I possibly going to buy here?” Lily whispered. She pulled out a piece of notebook paper scribbled with a list of at least thirty names. “I have to get gifts for all these cousins. Everyone comes to our house on Christmas Eve. A cozy dinner for sixty. Mom started cooking last summer!”

I tucked my long blond hair behind my ears and stared at Lily’s list. She had more relatives in and around this tiny town than the town library had books. Or so it seemed. Of course, our town was really small and so was its library, but she still had a lot.

But two was more than one, I knew. Way more. Until recently, it would’ve only been Dad on my list.

I glanced around the store, the Salty Crab, owned by Lily’s aunt Delores. It was a mystery how this woman was related to Lily. Lily had style. She wore cute outfits, oversize sunglasses, and lots of silver jewelry. The Salty Crab sold dresses that could double as tablecloths, sweaters with holiday themes, candles in the shapes of elves and reindeer, and lots of chunky plastic necklaces.

“We could walk somewhere else,” I suggested, pointing out the window to Beach Drive.

Lily picked up a snow globe of the Stellamar boardwalk. “My mom says I have to get some stuff here. Family pity. What about you?” She pointed to a nearby display. “Tie with a huge Santa face for your dad?”

“Going to pass on that,” I said. “I’m making my gifts. For Dad, I’m decorating a wooden box with some tiny shells I found on the beach.”

“You’re so good with crafty things,” Lily said. “What about Lady Azura?”

“I don’t know,” I confided. “I want to make her something too, but it has to be special. You know?”

“Totally one-of-a-kind,” Lily agreed. “Nobody else is like her.”

I watched the tiny snowflakes fall inside the glass ball as Lily shook it. After months of sharing a house with the old woman, I still didn’t know a lot about her. Nothing personal. But I did know we had a connection. We saw things the same way.

A way I couldn’t even begin to explain to Lily.

A way no one else could imagine.

“That’s it. I’m getting snow globes for all the cousins who work on the boardwalk.” Lily grinned. “Half the list is done.” She turned to me. “Are you supposed to get Mrs. Martino something?”

“Seriously?” I wrinkled my nose. “I’m not the one dating her, my dad is. Besides, she makes me call her Janelle.”

“I know. My dad says Janelle’s really nice, but I keep thinking if she’s the one responsible for releasing Dina into the world, then she can’t be all she seems.”

“You think she’s hatching a diabolical plot?” Lily’s dark brown eyes twinkled. Dina Martino was a grade older than we were, but everyone at our school knew her. The mean girls were always known. Supermean girls, like Dina, were legendary.

“No. I just think Janelle’s clueless about her daughters. Dad dragged us all out for a family dinner last weekend. Dina’s older sister, Chloe, was dressed like they were hosting a beauty pageant at the Chinese restaurant. Sparkly dress and stiletto heels. She and Dina talked about shopping and clothes and hair extensions as if I wasn’t even there. The fortune cookie said more to me than they did.”

“Did your cookie predict that your dad will keep dating Janelle?” Lily asked.

“It said something weird like ‘It is better to be the hammer than the nail.’”

“You should ask Lady Azura.” Lily’s tone turned serious. “She could look at the tea leaves or the tarot cards.”

“I don’t need a fortune-teller to tell me this won’t last. My dad’s dated lots of women. None of them ever work out. He can’t get over my mom,” I explained. “Janelle has no chance. I’m not worried about her.”

“She’s decided I don’t exist. That’s working for me.”

“She always trips Miranda in dance class. Her foot appears out of nowhere, and our teacher never sees it. She just thinks Miranda’s gotten really spastic,” Lily reported. “Miranda used to stand in the front row. Now she’s in the back. Guess who dances in front now?”

Miranda Rich was the most graceful girl I’d ever met. If Dina could pull that off, there was no telling the heights of her meanness.

I zipped up my red down parka to my chin and followed Lily outside. The gray clouds hung low and heavy, but there hadn’t been snow yet. December 15. Ten more days. I hoped I’d get my first white Christmas.

Half the stores on Beach Drive were closed. Stellamar was a summer town. No one bought inflatable rafts, painted hermit crabs, or beach umbrellas in December. Lily inspected Seasons Sports Stop’s small window display, which was basically a bunch of sports equipment heaped into a gift-wrapped box.

“What are you getting Jayden?” she asked.

“I heard. Wait. You think I should get him something?” My breathing quickened. Total panic. Jayden Mendes was so cute, with his thick brown hair and warm brown eyes. We talked all the time at school now. Sometimes he texted me. But we were just friends. That was all. I hadn’t even considered getting him something.

“What do you know?” I demanded.

She stalled, twirling a strand of her wavy, dark hair around her finger. “He told me not to tell you.”

“Okay, you forced me. Jayden asked me what kind of things you like,” she revealed.

“I think he’s going to get you a Christmas gift!” Lily beamed. “Isn’t that great?”

“No. That’s horrible. That means I have to get him something too.” My voice squeaked. Until I moved here, I’d practically never even talked to a boy. I’d just started flirting with Jayden a little. Now I had to buy him a gift? “How about a soccer ball?” I pointed to the window display.

“It’s kind of lame,” Lily replied. “I mean, what if he gets you something good, like a necklace, and you give him a ball? What does that say?”

I groaned. “What’s a gift supposed to say?”

“My cousin Dawn Marie says if a guy gets you jewelry, then he really likes you. My cousin Jessie told me if you get a guy a video game, it says you don’t want to hang out with him—”

“Because why?” I wasn’t following all this.

“Because you’re telling him to go spend time with his video game instead of you!”

“But don’t games have two players? We could play together.”

Lily shrugged. “You should talk to my cousin Tori. She’s always buying gifts for boys. She once bought—Oh, look, there’s Adam hanging lights.” She pointed to a nearby seafood restaurant. “He’s Uncle Lenny’s son. I’m going to say hi. Be right back.”

I watched Lily scamper down the sidewalk. She never walked. She always skipped or danced. She was always in motion.

What was I going to get Jayden? I wondered. Could I make him something? Or was that too weird? What did I want the gift to say?

I turned back to the sports store window for one last look. Maybe there was something—

A man had appeared.

He stood next to me. Extremely close. So close I could smell him. Musty, almost sour.

I stepped back. “Excuse me,” I mumbled.

He wore a khaki uniform with gold buttons, heavy brown boots, and a hard rounded hat. An American flag patch was sewn on one sleeve.

The other sleeve fluttered in the slight breeze.

Empty. The soldier had only one arm.

He leaned toward me, his head inches from mine. Dangerously close. His face was young and extremely pale.

As if all the life had drained from him.

The pungent smell grew stronger. A smell I’d smelled before. The odor of death.

He locked his gray eyes with mine, and in that instant, I knew.

The man was dead.
Phoebe Rivers

Phoebe Rivers had a brush with the paranormal when she was thirteen years old, and ever since then she has been fascinated by people who see spirits and can communicate with them. In addition to her intrigue with all things paranormal, Phoebe also loves cats, French cuisine, and wiling her afternoons away in coffee shops writing stories. She has written dozens of books for children of all ages and is thrilled to now be exploring Sara’s paranormal world.

Book #4 of Saranormal
By Phoebe Rivers
LIST PRICE $6.99
PRICE MAY VARY BY RETAILER