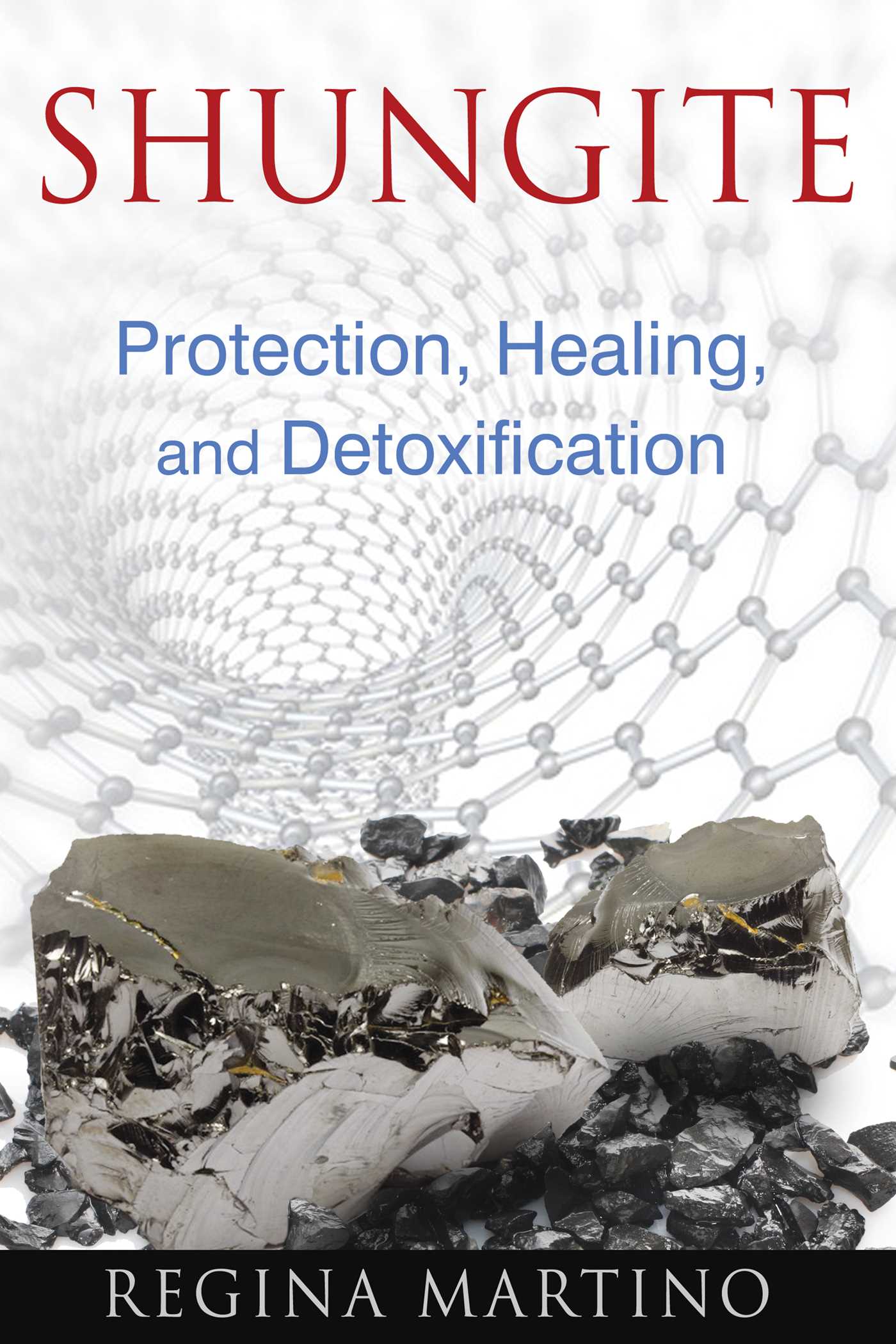 • Explains how shungite counteracts the harmful effects of EMF and radiation from computers, cell phones, Wi-Fi, and other electronic devices

• Cites many double-blind scientific and medical studies on shungite

• Explores how shungite acts as a natural antioxidant, immune booster, pain reliever, and allergen suppressant as well as water purifier and revitalizer

• Reveals how shungite contains fullerenes, which recent research shows are able to slow both the growth of cancer cells and the development of AIDS

Found near the small village of Shunga in Russia, the remarkable mineral known as shungite formed naturally more than two billion years ago from living single-cell organisms. Used in Russian healing therapies since the time of Peter the Great, shungite contains almost the entire periodic table of the elements as well as fullerenes, the hollow carbon-based molecules that recent research shows are able to slow both the growth of cancer cells and the development of the AIDS virus.

Citing many double-blind scientific and medical studies on shungite, Regina Martino explains its many protective, healing, and detoxifying properties, including its ability to counteract the harmful effects of electromagnetic fields and radiation from computers, cell phones, Wi-Fi, and other electronic devices and appliances. Acting as a natural antioxidant, immune booster, pain reliever, and allergen suppressant, shungite and “shungite water” can be used to treat skin ailments and musculoskeletal diseases, accelerate the healing of cuts and wounds, cleanse internal systems, and increase the body’s intake of vital energy. Detailing shungite’s many microelements and biologically active substances, Martino reveals how the stones have been proven to purify and revitalize water. Exploring the energetic properties of shungite, she reveals how it facilitates energetic transfers between the chakras and higher energies outside the body and can be used to harmonize living spaces.

Truly a marvel of the natural world, shungite offers protection against the perils of our modern technological world and healing for both body and spirit.

What is the unique property that distinguishes shungite from other protection stones?

I have carried out detailed studies using bioenergetic tests and have personally tested more than 200 stones and crystals that have an influence on the chakras. Among those tested, I made comparative studies of about 20 stones, including shungite, that were able to resonate with the first chakra.

It is quite possible that the presence of fullerenes would explain all of shungite’s qualities:

CORRECTING THE INFLUENCE OF LEFT-TORSION FIELDS

At every moment, our energetic body is continuously informed and influenced by everything around it. It picks up and integrates subtle information from everything that it comes into contact with, whether or not we’re aware of it.

A torsion field, created by the form of an object or by the spin of elementary particles as defined in quantum physics, can have a right rotation (as in DNA) or a left rotation. Research conducted by Russian scientist Vlail Kaznacheyev at the Institute for Clinical and Experimental Medicine at Novosibirsk has demonstrated that right rotation fosters life, whereas a torsion field that has left rotation has a negative effect on cells. Pulsed wave radiation such as Wi-Fi and DECT (Digital Enhanced Cordless Telecommunications) generate left-torsion fields.

The influence of left-torsion fields shifts our vertical axis and totally unbalances our bioenergetic system. Our system tries to rebalance itself, but if the influence is present for long periods it can permanently upset the energetic system and disturb it to the point where it influences the physical plane, giving rise to dysfunction and illness.

When shungite is in direct contact with the physical body or when it is present as a nearby emanation (see the action of spheres or pyramids of shungite in the chapter “Practical Applications”), it helps the energetic body instantaneously correct the shifting of the plane to the left and allows the system as a whole to remain centered. It also allows the individual to be connected to telluric energy and cosmic energy in a natural and positive way.

This property of shungite is its main asset. This is what makes it a stone of protection as well as a stone that accompanies the healing of a number of illnesses.

NEUTRALIZING THE IMPACT OF ELECTROMAGNETIC RADIATION

Another of shungite’s great assets, which mainly accounts for its recent fame, is its ability to protect us from electromagnetic radiation. This radiation is one of the principal sources of left-torsion fields.

The rapid technological development of our society has brought us into contact all day long with a large quantity of sources of harmful radiation, and very often we are quite unaware this is happening. It is clear that we need to find solutions so that humankind can survive its own technology.

Over the past fifteen years, a number of researchers in the field of bioenergy have endeavored to establish systems that would allow individuals to reestablish their equilibrium. However, it has only been recently that the public at large is beginning to be more fully informed about the health problems created by the increase in electromagnetic radiation. A simple, efficient, inexpensive solution is what we need: shungite.

We conducted two kinds of experiments: one was to test the different ways the impact of electromagnetic fields on the individual could be corrected and the other was to try to correct the harmful information directly at its source. In both cases we obtained satisfying results with shungite. We provide a complete account of these tests in appendix 1.

The transformative effect of shungite appears essentially at the bioenergetic level: we could say that it transforms left-torsion information into right-torsion information. Although electromagnetic waves are invisible, they have a physical component, and it is this physical component that is picked up by electromagnetic field detectors. When information is modified on a subtler energetic level, the physical information is still picked up by the detection equipment. In other words, shungite does not interfere with the functioning of this equipment. It doesn’t turn off the pulsed waves emitted by a Wi-Fi transmitter, a cordless phone, or a cell phone; it transforms the harmful radiation.

The solution is not to eliminate the radiation but instead to prevent its deleterious impact on our health.

We’re going to illustrate this especially important property of shungite with an example drawn from an experiment carried out recently in Russia. Researchers went to a site where fowl were being raised and for twenty-one days they studied three incubators, each of which contained ninety-eight hen’s eggs. They placed a cell phone in standby mode in the center of the first incubator. The second incubator had another cell phone in standby mode, positioned on a shungite plate. The third incubator was the control and was used in the normal way. At the end of twenty-one days, the control group had a loss rate of 11.2 percent. The incubator with an unprotected cell phone had twenty-one chicks hatch--a rate of loss of 79.42 percent! The incubator with the cell phone that had shungite protection came in with a rate of loss of 10.5 percent. The figures speak for themselves!
Regina Martino

Regina Martino is a geobiologist and bioenergy expert specializing in stones and crystals. She lives in Paris, France, where she runs La Roche Mère, a crystal, gem, and stone boutique.

“Regina Martino’s book is unique in the literature of metaphysical stones in that it contains a much higher ratio of science to metaphysics than is frequently the case. Her writing is strong and convincing, her research is fascinating, and the stone she has focused on is certainly powerful and compelling in its own right. Martino takes the reader through chapters dealing with the geography, history, geology, and biology related to shungite as well as what she calls the ‘energetic or practical chapters.’ The result is a fascinating and thorough depiction of the substance and energy of this remarkable new stone. I would recommend this book to anyone who wants to learn more about this modest-looking but energetically exceptional stone.”

– Robert Simmons, author of The Book of Stones and Stones of the New Consciousness and publisher of th

“Her writing is strong and convincing, her research is fascinating and the stone she has focused on is certainly powerful and compelling in its own right. I would recommend it to anyone who wants to learn more about this modest-looking but energetically exceptional stone.”