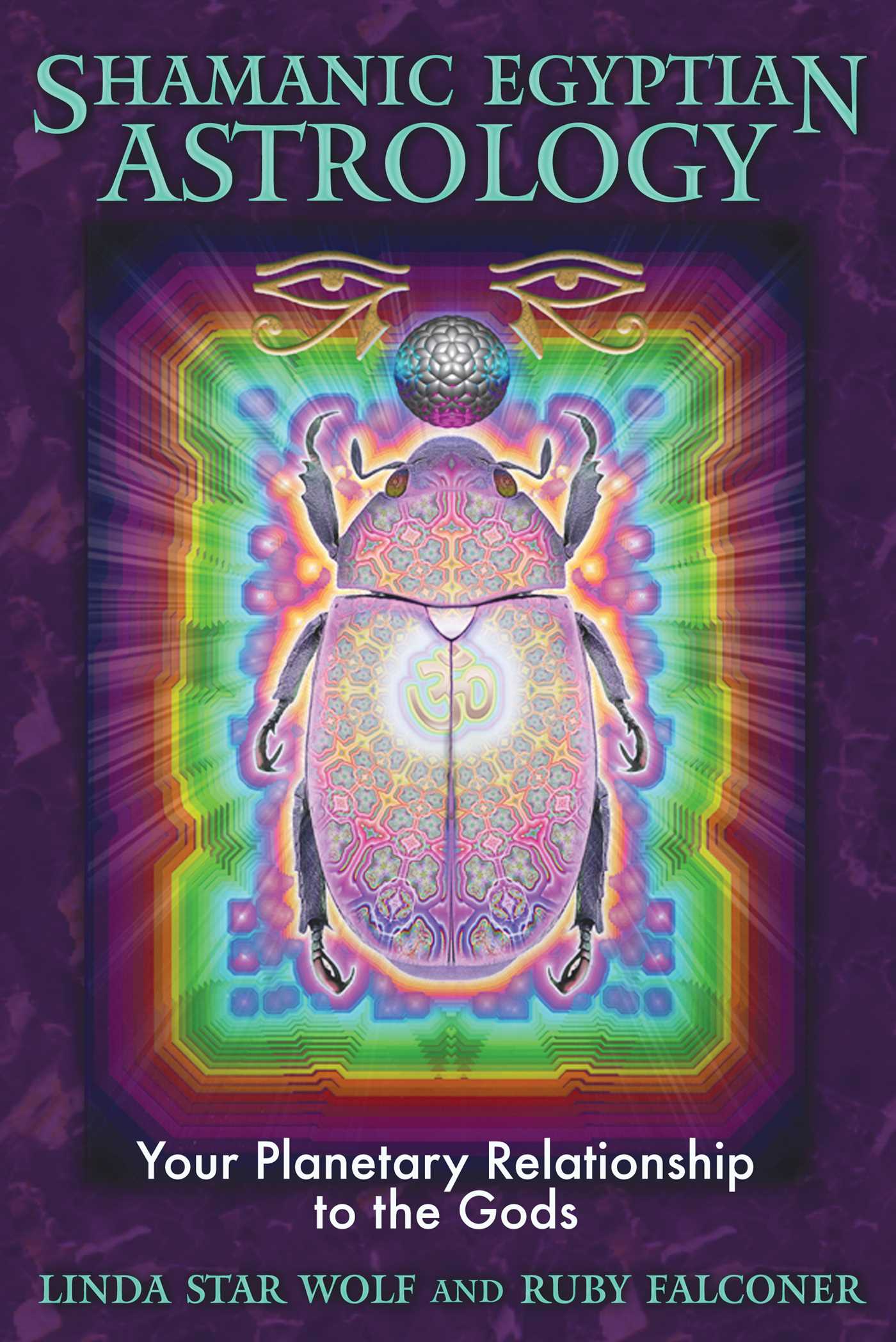 Integrates the Egyptian pantheon, the ancient language of astrology, and shamanic practices

• Links each of the planets and signs in Western astrology with its Egyptian counterpart, such as Leo with Anubis

Shamanic Egyptian Astrology integrates the Egyptian pantheon, the ancient language of astrology, and shamanic practices to promote a new way to interpret and work with natal charts. Revealing the cross-cultural mythology and astrological significance of the individual Egyptian gods and goddesses, the authors link each of the 12 zodiac signs and 11 celestial bodies of Western astrology with its Egyptian ancestor, introducing new significance to their positions and interactions in a horoscope. For example, Leo is linked with Anubis and Taurus with Hathor. Venus is associated with the goddess Isis and Jupiter with Horus.

Each chapter includes sacred invocations and shamanic rituals to invite the wisdom of each Egyptian deity into your life--such as calling on Sekhmet for action or Thoth for clarity. With sample interpretations of the charts of Barack Obama and Gloria Steinem, this book provides a practical framework for accessing the wisdom of ancient Egypt and offers astrological and shamanic tools for spiritual guidance and the coming shift in planetary consciousness.

We stand before you, Mighty Keeper of the Keys, and we humbly ask you to show us the way home. You are the doorway to the past--is it possible you know the future as well? Who are you really, great Sphinx, guardian of the Great Star Nations and keeper of the Akashic Records? Surely your original face is not that of a man? Is it you, Anubis, ancient jackal wolf of Egypt who came to be Earth’s Altar and sentinel to the Blue Star Mysteries? If we listen closely we can hear your voice whispering, then howling across the sands of time. All things return to dust and blow away in the wind only to be remembered time and time again. Nothing is ever really lost, and home is simply a remembering of that ancient echo from the past. Or is it the future? Or is it all the same?

The great Sphinx, the most commanding image associated with ancient Egypt, huge and powerful, towering over mere mortals, is the great cosmic library of our planet. The Sphinx holds within its body information it receives from the Star Nations. The Sphinx operates as a sort of transmitter, receiving information from the stars and then transmitting it across the surface of the Earth.

The language of astrology has always been about the relationship of the Earth and its creatures to the cosmos. While astrology is an earth-centered language, and even more a person-centered language, the story it presents describes the influence of cosmic forces upon the Earth. While astrology searches for meaning through the dance of planetary forces, some humans receive messages in a more direct fashion, through mediumship or channeling. The great Sphinx is a transmitter to those who have the ability to receive.

Through its alignment with the heavens certain information is passed to the Sphinx and then on to those who can hear the messages. In this way the Sphinx functions in a matter similar to that of an altar. An altar is a consolidation of energy in a particular place. When we build an altar, we use objects that are charged with spiritual significance and place them with intention so they receive energy and then pass it on to us. So, too, is the purpose of the Sphinx.

In reality there are many such altars on Earth. Spread across our planet are pyramids and complexes aligned with points in the sky, ranging from Stonehenge in England, to Chaco Canyon in New Mexico, to Machu Pichu in Peru. All these places are aligned with ley lines, meridians tracing the surface of the Earth that at certain times of the year align with planetary and cosmic movements. The existence of these places--clearly built with great care and dedication by ancient peoples--provides a constant source of fascination and curiosity. The energy of these places is laden with significance.

In Shamanic Egyptian Astrology, Mercury is Thoth, the Sacred Scribe of ancient Egypt. Thoth represents our ability to open to messages from the divine and to communicate with inspiration and illumination. The great Sphinx, and the many other places upon the Earth similarly aligned with cosmic energies, is the transmitter of these messages of inspiration and illumination to those humans sensitive enough to receive this information.

There are many theories of the origins of the great Sphinx. He is carved out of bedrock, and most archaeologists date him back 4,600 years. We believe his origins go back much earlier, however--10,000 years or more. While the great Sphinx presently has the head of a man, this is a re-carving. Another head once sat upon its shoulders--that of a canine.

In Shamanic Egyptian Astrology the sign Leo is aligned with Anubis. The star Sirius rises after the constellation Orion each night. The belt of Orion points toward Sirius, the Dog Star. Sirius was extremely important to the ancient Egyptians. Sirius disappears from view for seventy days each year. Its reappearance heralded the annual flooding of the Nile River, essential for a rich and abundant harvest. Sirius was considered to be the home of Isis and her adopted son, Anubis. Who better than he to transmit to Earth the secret mysteries of death and rebirth?

Anubis is the walker between the worlds, he is the embodied spirit from the Dog Star (Sirius), who holds the original information from the stars and emanates it to us as the sacred double--Earth as it is in heaven. He is the Gemini spirit messenger. How appropriate that it is he who transmits to the Sphinx. Over the long centuries the link between Earth and Sirius has been weakened, the Earth Altar was changed, the secret codes forgotten. It is time, however, for our collective memory to be awakened and for us once again to open to the messages transmitted to us from the skies.
Linda Star Wolf

Linda Star Wolf, Ph.D., has been a visionary teacher and shamanic guide for more than 35 years. The founder and codirector of Venus Rising Association for Transformation and the founder and president of Venus Rising University for Shamanic Psychospiritual Studies, she is the creator of the Shamanic Breathwork Process as well as the Shamanic Ministers Global Network and the Wise Wolf Councils. A spiritual granddaughter of Seneca Wolf Clan Grandmother Twylah Nitsch, Star Wolf is the author of Shamanic Breathwork and co-author of Visionary Shamanism, Shamanic Egyptian Astrology, Shamanic Mysteries of Egypt, and The Anubis Oracle. She lives at Isis Cove Retreat Center near Asheville, North Carolina.

A professional astrologer since 1977, Ruby Falconer is the staff astrologer, lead trainer, business manager, and a workshop facilitator for Venus Rising. She lives in North Carolina.

“Shamanic Egyptian Astrology is a new creative way of looking at and applying astrology. It is unique in that it brings together Egyptian and Western astrology. What I especially like is that at the end of each chapter there are rituals and meditations that anyone can do. It is nice to have a book with practical applications. I recommend this book to all spiritual seekers.”

– John DeSalvo, Ph.D., director of the Great Pyramid of Giza Research Association and author of The Lo

“I am in awe of Linda and Ruby’s depth of knowledge of ancient Egyptian archetypes and mythology. They have collaborated to produce a long overdue weaving of East and West sacred astrology in a language easily understood by the neophyte and the advanced student. Their noble purpose to help us develop in spiritual consciousness via Egyptian astrology is definitely achieved.”

– Brenda Schaeffer, author of Is It Love or Is It Addiction?

“This fascinating book helps us form the anatomy of our human psyches by blending the Egyptian gods and archetypal symbols of Greek and Roman astrology, of which we are all a part.”

– Jacquelyn Small, author of Awakening in Time and The Sacred Purpose of Being Human

“Ruby and Star Wolf have brought forth a remarkable synthesis of Shamanic wisdom with astrology and Egyptian alchemy. This insightful information-filled book is a valuable resource for everyone interested in deep exploration and transformation.”

“Shamanic Egyptian Astrology is a brilliantly crafted astrological tool for deepening one’s self-knowledge. Consciously working with this system promises to yield layer upon layer of insights regarding the true nature of one’s life and spiritual blueprint.”

“Combining Ruby Falconer’s vast astrological knowledge with Star Wolf ’s intuitive connection with the pantheon of ancient Egypt breathes alchemical magic into traditional astrology. These authors have looked into the distant past and uncovered messages to help guide humanity now, as we enter the Aquarian Age.”

"The goal of Shamanic Egyptian Astrology is to re-language astrology, but in essence, it's another creative message about the age that is upon us."

". . . if you're looking for a comprehensive guide on seeking aid from Egyptian gods, all while understanding how the elements of your sign can be used to make you a more spiritual being, then Shamanic Egyptian Astrology is a must-have for your personal library. . . . Both a guide for the advanced student and beginner, Wolf and Falconer's teachings are grossly underrated and deserve a standing ovation just for its intensive research alone."