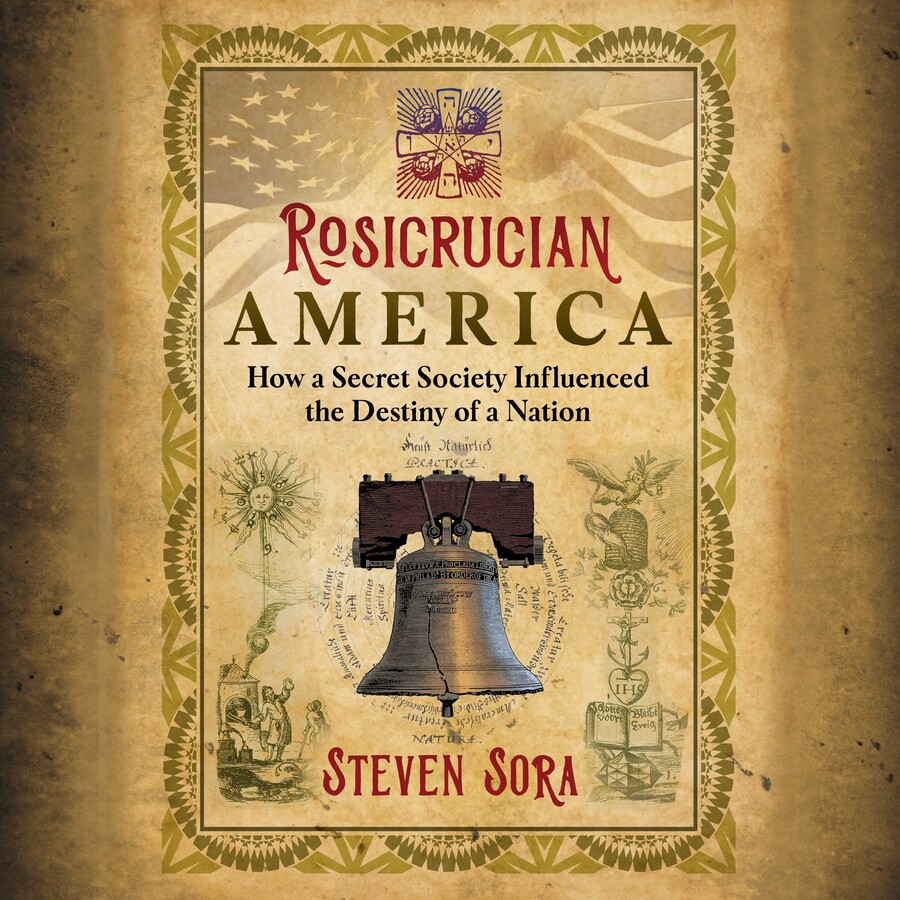 An in-depth history of Rosicrucianism, its key members, and their roles in the formation and settling of America

• Explores Sir Francis Bacon and Dr. John Dee’s deep influence on England’s colonization of America as well as the Rosicrucian influence on the Founding Fathers and on cities such as Philadelphia and Williamsburg

Dr. John Dee and his polymath protégé Sir Francis Bacon were the most influential men in the court of Queen Elizabeth I, part of an elite group with invisible control throughout Europe. And, as Steven Sora reveals, not only were they key members of the Rosicrucians, they were the driving force behind England’s colonization of the New World and the eventual establishment of the United States.

From Avalon in Newfoundland to New England to Pennsylvania and Virginia, Sora shows how Bacon and Dee’s Rosicrucian impact is felt throughout North America. He details Bacon’s possible authorship of the anonymous Rosicrucian texts of the early 1600s, his connections with Sir Walter Raleigh’s School of Night, and the origins of Rosicrucianism in Bacon’s Order of the Helmet. He explains how Bacon envisioned America as the New Atlantis, a utopia where liberty and freedom of learning prevailed--a key tenet of the “Invisible College” of the Rosicrucian Order--and how Dee convinced the Queen that England had rightful claims in the New World by drawing on legends of both King Arthur and Welsh Prince Madoc voyaging West to America.

Sora looks at Rosicrucian influences on the Founding Fathers and earliest settlers of America, such as Washington, Franklin, and William Penn of Pennsylvania, on the American Revolution, and on American colonies, such as the Williamsburg colony. He details how Penn invited Rosicrucians to Philadelphia and how the city’s layout follows esoteric principles, including a direct reference to Bacon’s New Atlantis. Moving into the 1800s and beyond, he reveals how a handful of Rosicrucians served as the Inner Sanctum of the Knights of the Golden Circle and how Rosicrucians are behind the Georgia Guidestones, carved granite monoliths with messages in ancient languages.

Providing a thorough and expansive view of Rosicrucianism, its occult origins, and its deep imprint on America, Sora shows how this secret society still continues to exert invisible influence on the modern world.

History as we have been taught implies an America born in the united efforts of a grass roots movement of a large populace striving for freedom of worship and freedom from highhanded taxation. The truth is that a very small handful conceived of such lofty goals and this group was comprised of alchemists, geomancers, and philosophers, many who met in secret and risked all for exposure.

This small circle of individuals has played an unusually great role in the history of the world, influencing politics, science, and the foundation of the United States. Born in sixteenth century England and forced to remain Sub Rosa (Under the Rose) due to the backlash of the unenlightened Church, the circle has been known by more than one name, but the most fitting is “the Invisibles.”

The Invisibles communicated with each other and in their entirety became an invisible college. Its curriculum was an underground stream of knowledge. They survived even while the Cathars of France and Italy were exterminated by the Church. They survived the joint attack on the Templars and the arrest, torture, and death of many in what had been the church’s most powerful orders.

Smaller circles of men banded together to help each other on paths of discovery. Among such groups there were individuals who stood out both for spreading knowledge and for forming secret societies that could avoid detection and yet succeed in their purpose. Possibly the greatest was Sir Francis Bacon. He was the driving force behind an invisible Knighthood called the Order of the Helmet, whose members dedicated themselves to an ancient goddess, the Pallas Athena, who was depicted with helmet and spear. Her epithet was “the Shaker-of-the-Spear.”

Notably, the helmet of Athena gave her the ability of being invisible. Bacon would use this concept throughout his life, being the invisible man behind many works and, along with Dr. John Dee, the founder of the Order of the Rosy Cross (Rosicrucians)--the Invisibles. Bacon and his circle also became the driving force for the English colonization of the Americas. He was also an architect of what would become the American Revolution, even though he lived and died before his work would come to fruition. His device survives on the Virginia state flag as Athena holding her spear. Evidence of his influence also survives in places as distant as Newfoundland and Bermuda.

For Bacon, there was an Atlantis. It was directly across the Atlantic Ocean and in the distant past it shared commerce with Europe. He wrote, “You shall understand . . . that about 3000 years ago, or somewhat more, the navigation of the world, especially for remote voyage, was greater than at this day.” Bacon continued: “. . . we lost our traffic with the Americas . . . navigation did everywhere greatly decay.” Atlantis didn’t so much sink as did the European ability to sail the seas.

The road to the new Atlantis was not an easy one. Bacon understood first-hand the havoc the churches caused in fighting each other for supremacy. He understood the need for the concept of freedom of speech. He was forced to write his greatest works under the names of others to preserve his precarious status at the court.

Possibly the most influential man in the life of Bacon was Dr. John Dee. He was at once the most famous alchemist in Elizabeth’s time, a magician and a wizard who had the ear of the Queen. Dr. Dee served as Elizabeth’s astrologer and influenced her in many ways. It was he who convinced her that England had rights in the New World. He also convinced her of the “fact” that King Arthur’s Avalon was indeed America.

Dr. Dee was a most important member in a secret group called the School of Night that included Sir Francis Drake, Sir Walter Raleigh, Christopher Marlowe, Thomas Hariot, George Chapman, and the Earl of Northumberland. They were also considered Dragon-Men. They were the writers, the scientists, and the explorers who drove England to join the race for the New World.

Striving for nearly the same goals, they were not necessarily united. Infighting over leadership and land and favors of the Queen, and later King, brought them to betrayal, murder, and even fake murder.

For their efforts they were imprisoned, beheaded, expelled from the court, and pushed into poverty. However, collectively, they succeeded. England’s entry into the colonization of the New World started late, but because it put idealistic notions in the forefront, England achieved a different type of success. The Spanish sailed for gold and silver. The French sailed for furs. The English however came to America to re-create Avalon and create the New Atlantis.

In the process of bringing new ideals to a New World, they still had to act in secrecy. Both Elizabeth I and her successor, King James, were suspicious of any ideal that threatened their divine rights as king. Many of the original Bacon-authored texts--including his writings on Rosicrucian thought, his blueprint for the New Atlantis, and the disguised political statements garbed in comedy and history attributed to Shakespeare--were brought to America and concealed in vaults. Secret vaults exist on Oak Island in Nova Scotia, under the Bruton Church in Williamsburg, Virginia, and in the Cloisters of Ephrata in Pennsylvania. Some have been exposed, others remain hidden away and protected by a handful of guardians.

Their influence however is not always invisible. And, as we shall see, their plan for the world can be found on a set of stones erected in Georgia.
Steven Sora

Steven Sora has been researching historical enigmas since 1982 and is the author of The Triumph of the Sea Gods, The Lost Treasure of the Knights Templar and Secret Societies of America’s Elite. He lives in Allentown, Pennsylvania.

“Sora’s informative new book is a must for those eager for the truth about the secret roles played by the medieval Knights Templar, the Rosicrucians, and Freemasonry in the founding of the ‘New Atlantis.’ Now more than ever the world needs the truth about the individuals and the tenets they held dear, which was the secret blueprint for the founding of America. What was long ‘hidden in plain sight,’ Sora skillfully ‘brings into the light.’”

“Steven Sora has done it again. Following up on his immensely popular The Lost Treasure of the Knights Templar, Steven has woven another tapestry of well-researched, entertaining narrative, which provides America with many of the answers that the nation’s collective psyche currently seeks so desperately. Indeed, Rosicrucian America offers its readers a glimpse into the spiritual inspiration and alchemical transformation that provided much of the basis for the founding of the United States of America.”

“What fun I had reading this book! Steven Sora has connected so many of my favorite topics into one woven tale--a real page-turner. For 50 years I’ve been studying the German Pietists of provincial Pennsylvania, the authorship question of William Shakespeare, the far-reaching influence of Sir Francis Bacon and Dr. John Dee, and William Penn’s hidden reasons for coming to America, among other topics in this book, but it took Stephen Sora to flesh it all out with the latest research and put it all together in one brilliant volume. Like the alchemical goal of a Rosicrucian, this book will transmute your appreciation for the destiny of America.”

“. . . explores ideals that evolved through the Crusades, the Renaissance, and the Enlightenment. Both known and unknown adepts worked to weave together the threads of intellectual, philosophical, and spiritual principles that gave birth to a unique new nation: conceived in liberty and dedicated to the proposition that all men are created equal. That Rosicrucian vision survives to this day and is well presented in these pages.”

– James Wasserman, author of The Templars and the Assassins

“Textbook versions of early American history comprise little more than a propaganda veneer obscuring the occult forces that really drove the British colonization of our continent. Nowhere are these sub-rosa influences more credibly exposed and their leading conspirators better identified than by Steven Sora in his latest book, Rosicrucian America.”

– Frank Joseph, author of Power Places and the Master Builders of Antiquity