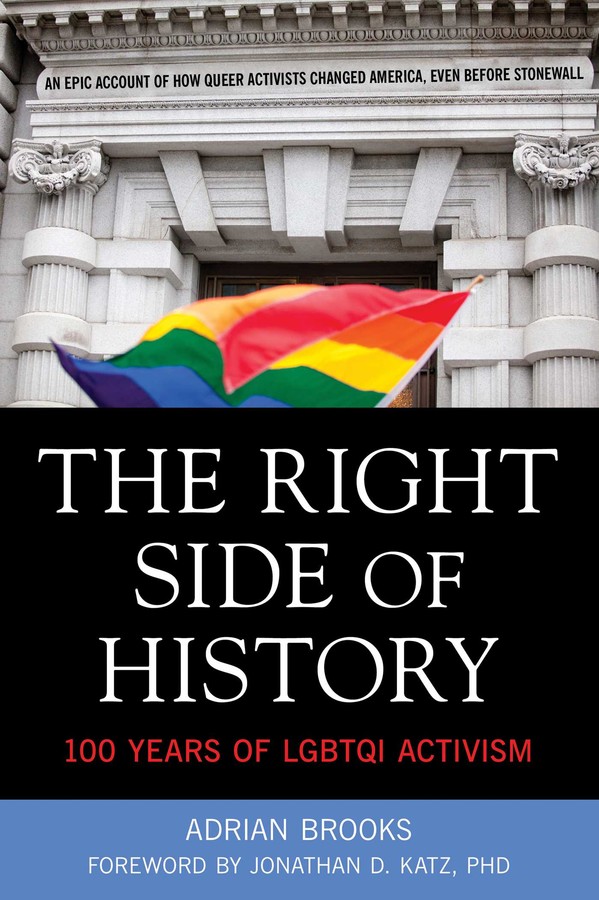 Right Side of History

Before, During, and After Stonewall: 100 Years of Heroes and History

The Right Side of History tells the 100-year history of queer activism in a series of revealing close-ups, first-person accounts, and intimate snapshots of LGBT pioneers and radicals. This diverse cast stretches from the Edwardian period to today, including first-person accounts of the key protest that is at the heart of the 2015 movie Stonewall.

The book shows how LGBT folk have always been in the forefront of progressive social evolution in the United States. It references heroes like Abraham Lincoln, Eleanor Roosevelt, Bayard Rustin, Harvey Milk, and Edie Windsor. Equally, the book honors names that aren't in history books, from participants in the Names Project, a national phenomenon memorializing 94,000 AIDS victims, to underground artists and writers.

Adrian Brooks is an American writer and activist who's been the vanguard of progressive political, spiritual, and social movements since the 1960s. An international traveler, poet, performer, playwright, painter, and designer, he is also a novelist and nonfiction writer. Born in Philadelphia, Brooks was raised Quaker. After graduating Episcopal Academy in 1966 as an early hippie and anti-war protester, he attended the international Friends World Institute -- a radical Quaker school intent on its students becoming nonviolent "agents of social change." In 1968 he volunteered for Martin Luther King in Washington, D.C. Following Dr. King's assassination, Brooks did field work in Mexico and East Africa before attending Woodstock in 1969, then went to India with the Friends World Institute. In the early 70s, he was active in New York's then radical SOHO Movement, then moved West where he became a prominent as one of the first gay liberation poets and as the scriptwriter and star performer of the legendary San Francisco "Angels of Light," an offshoot of the Cockettes. Brooks remains devoted to good works and activism to this day. He supports orphans and assists education in rural India and contributes to the Huffington Post as well as Lambda Literary. He lives in San Francisco.Jonathan N. Katz is an independent scholar and historian of lesbian, gay, bisexual, transgender, and heterosexual American history. He is also a visual artist. His historical work has focused on same-sex attraction and changes in the social construction of sexuality and intimate relationships over time. His works stress that the categories with which we name, describe, define, and understand human sexuality are historically and culturally specific, along with the social organization of sexual activity, desire, relationships, and sexual identities. In his work, language is studied as one important tool that human beings use to construct different, historically specific sexualities and sex/gender systems. He lives in New York.

Right Side of History