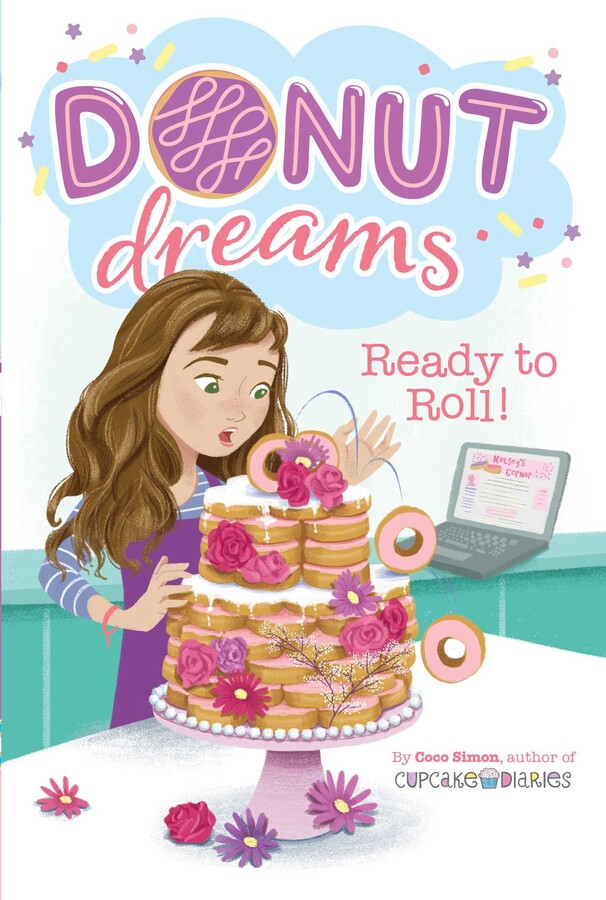 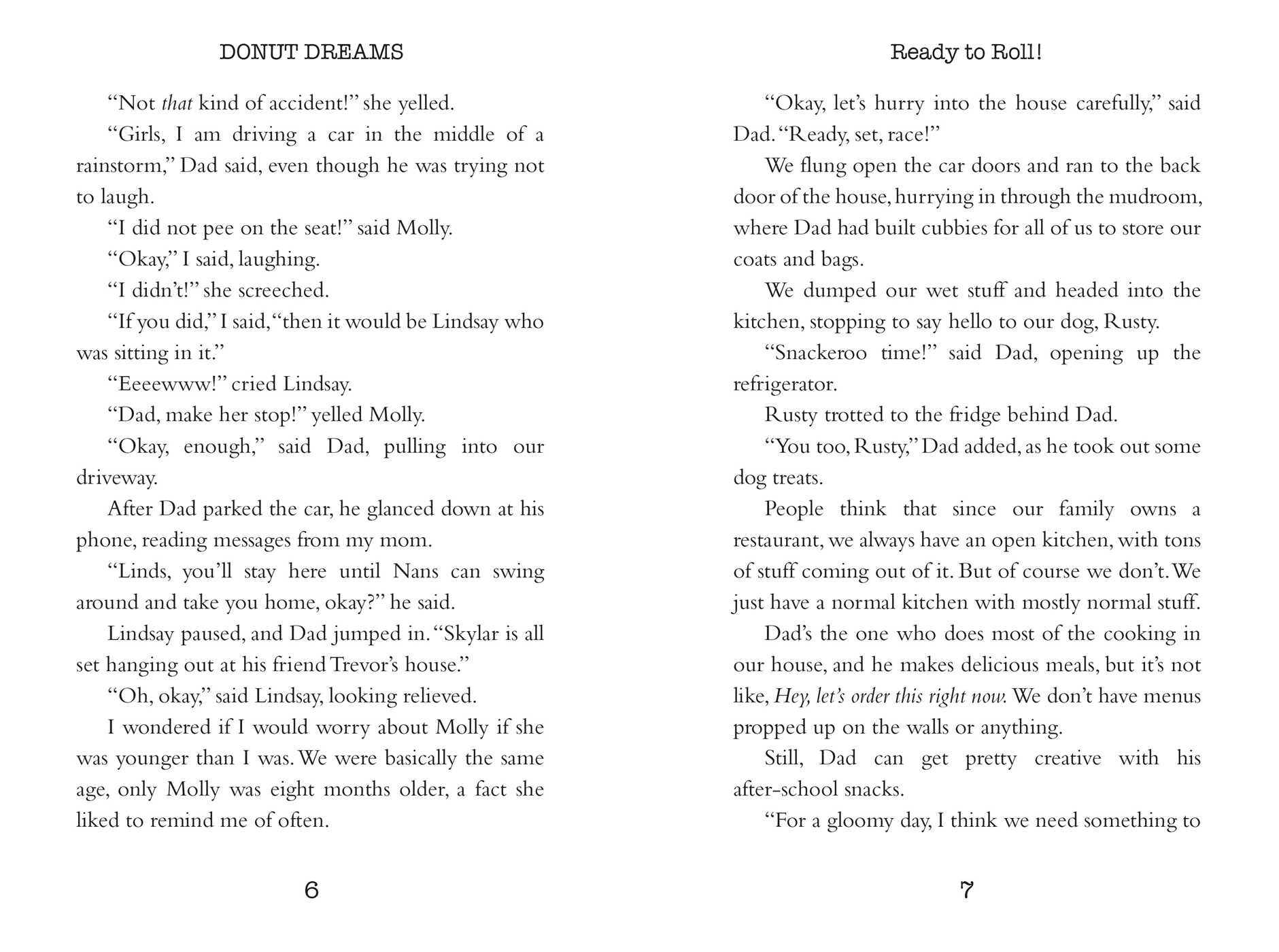 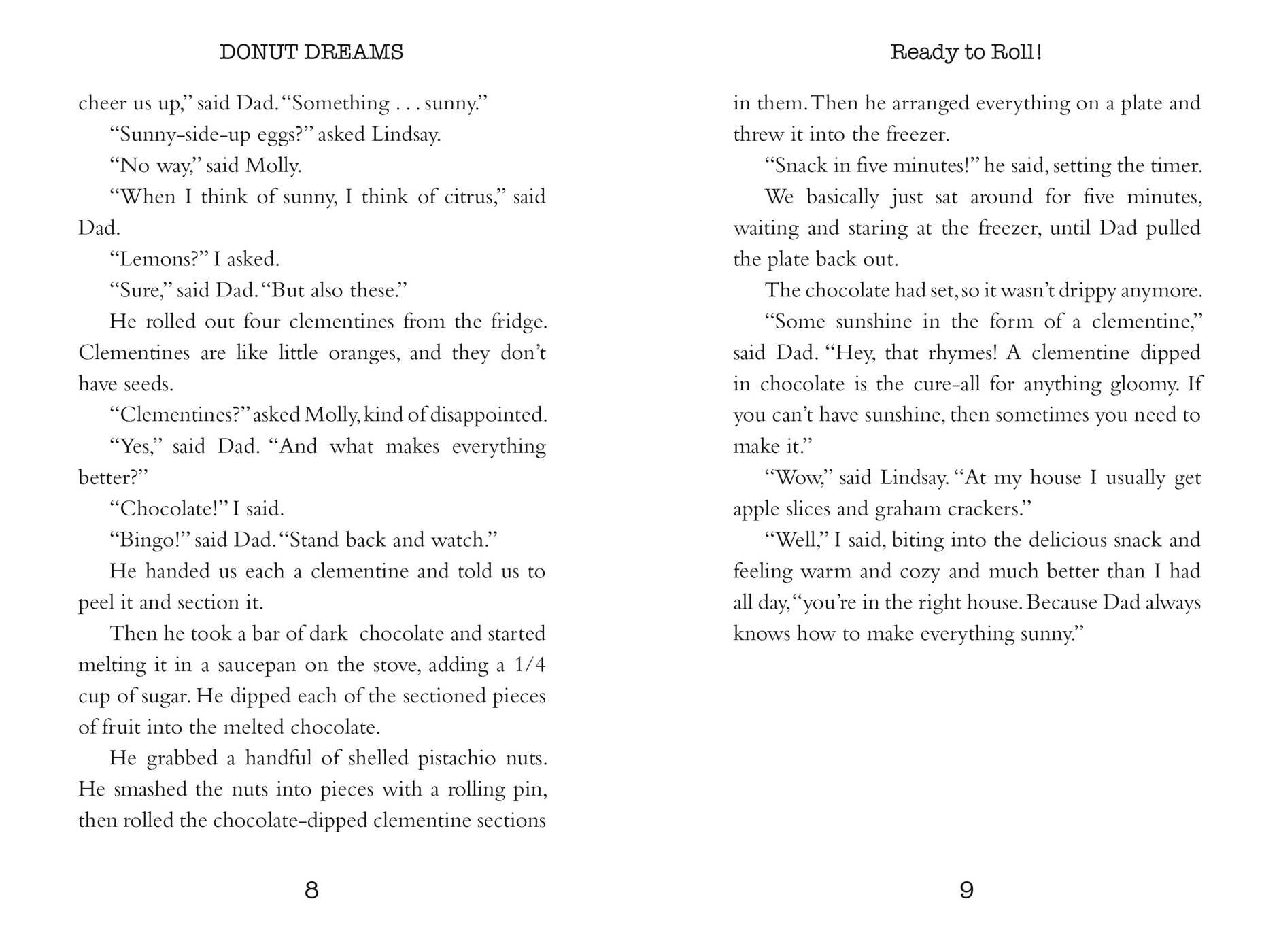 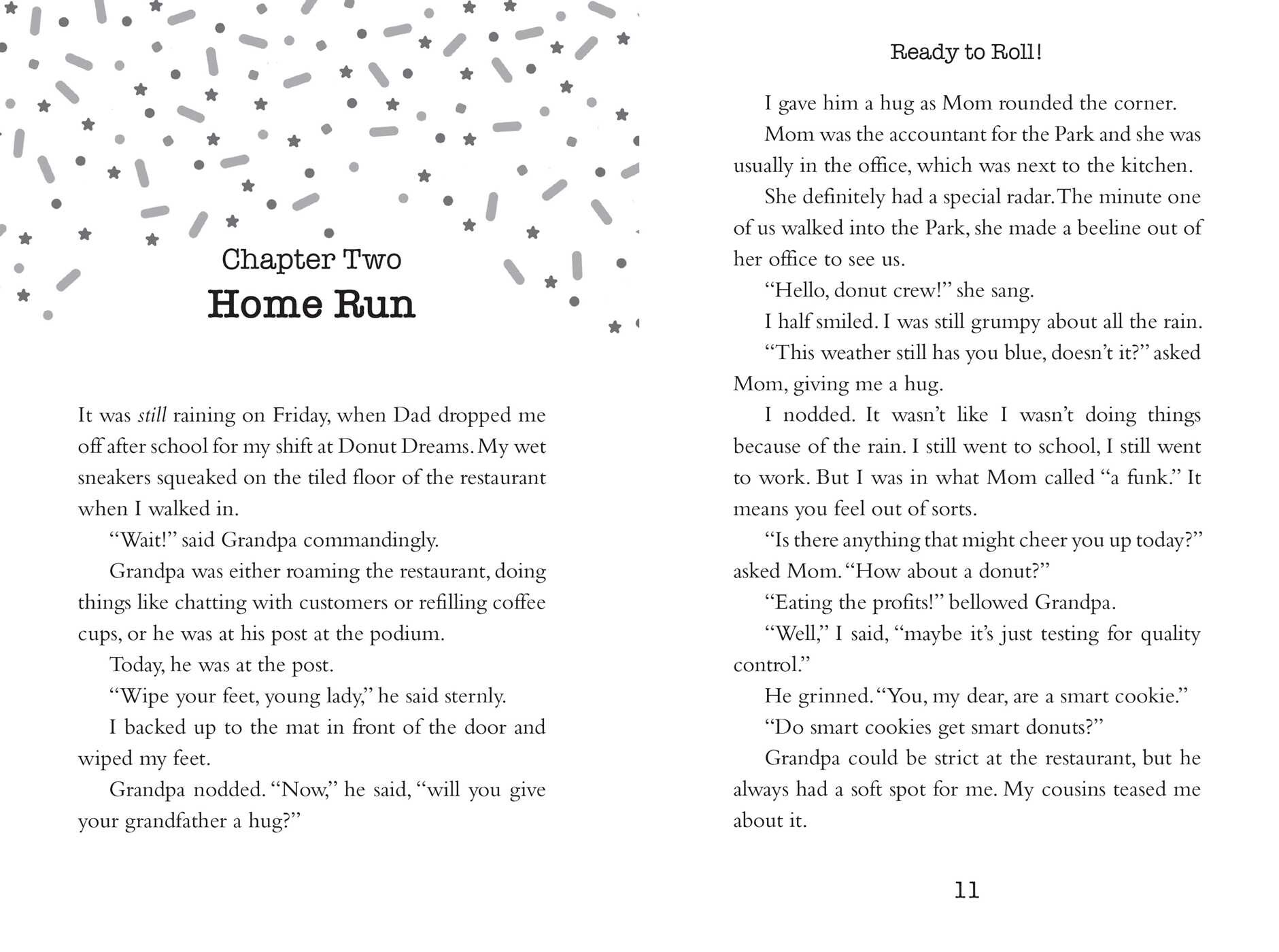 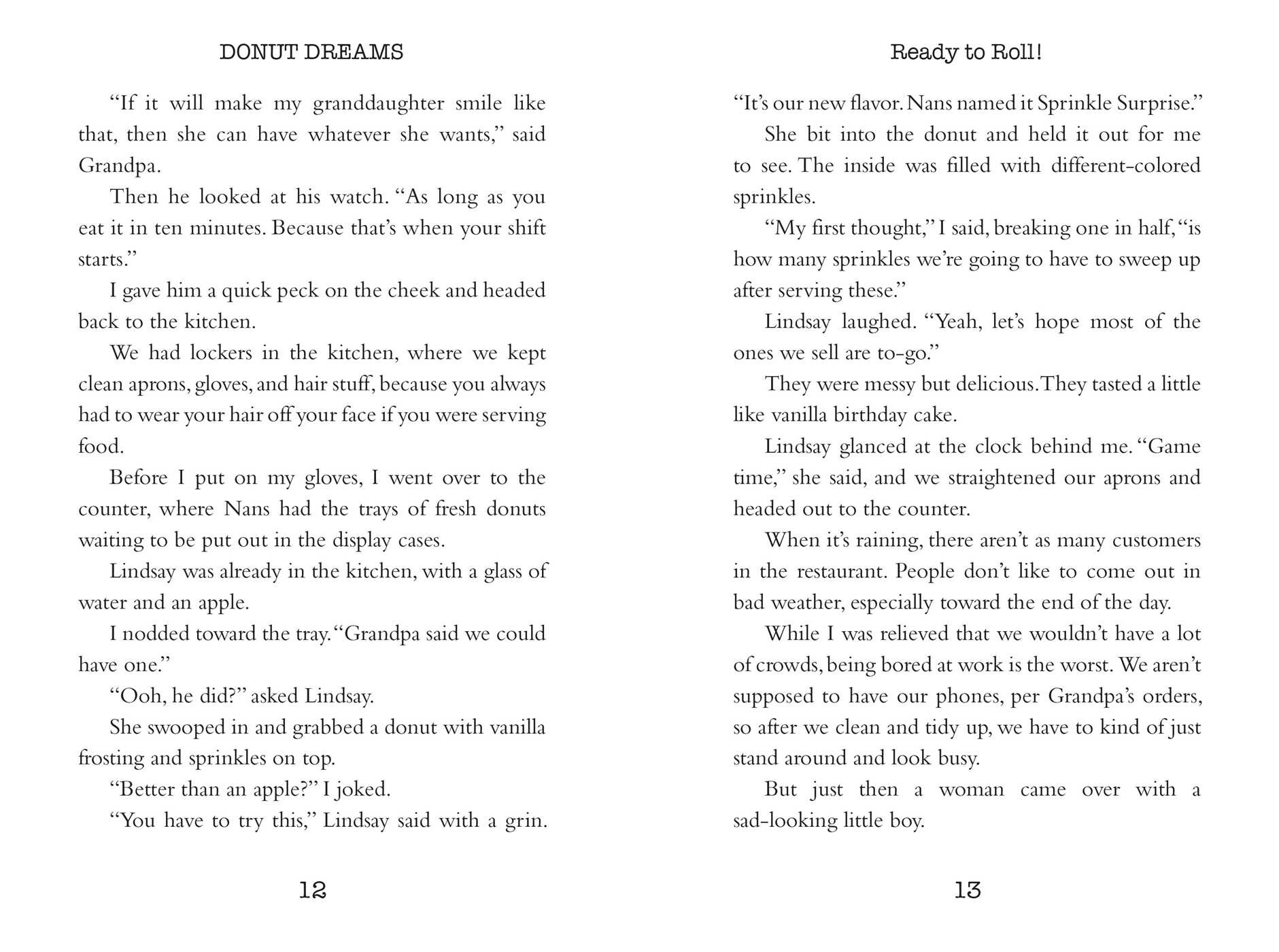 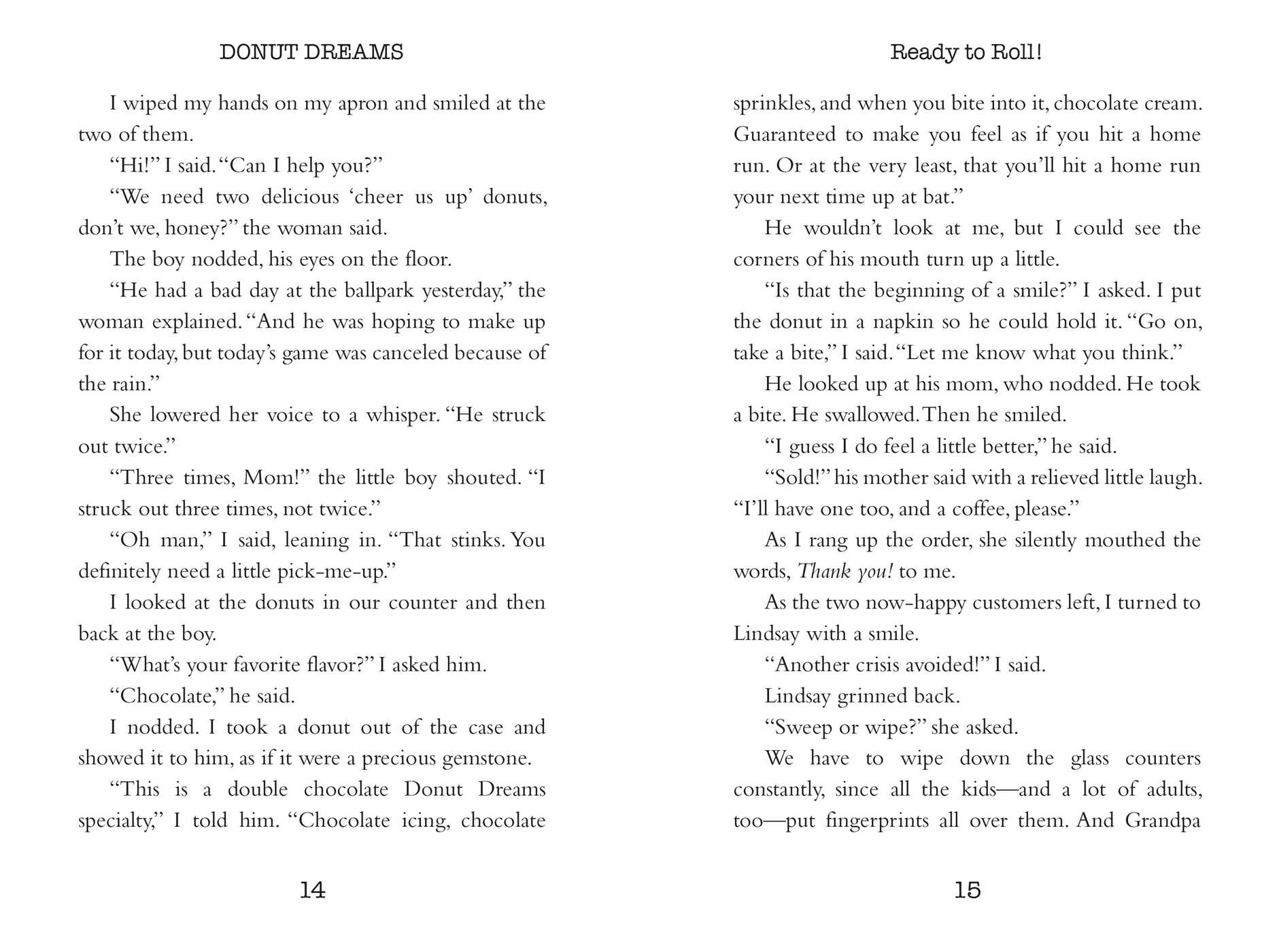 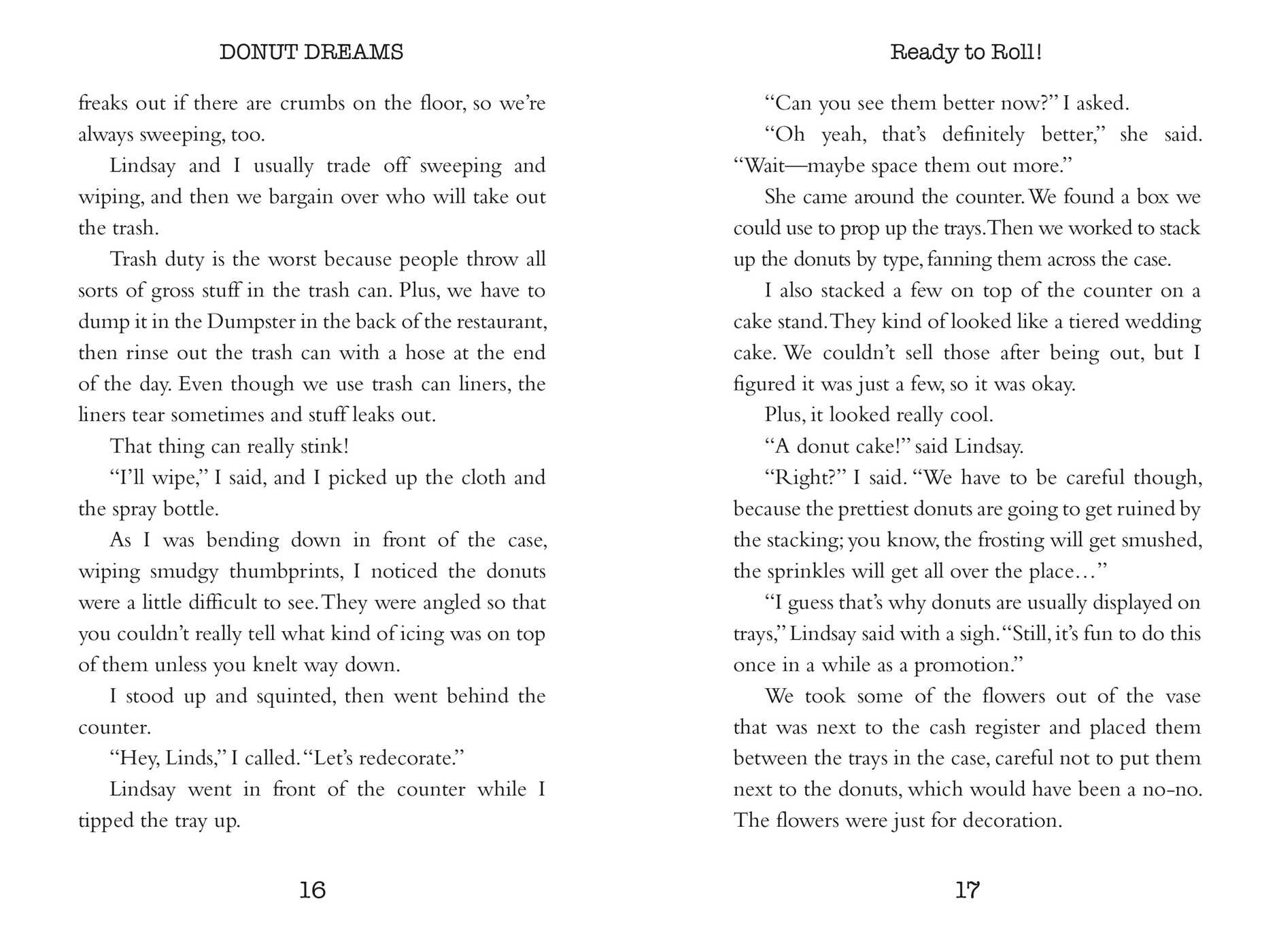 Kelsey grapples with her newfound internet popularity in the sixth delicious book in the Donut Dreams series from the author of the Cupcake Diaries and Sprinkle Sundays series!

Kelsey loves working in her family’s restaurant at the Donut Dreams counter, but she feels like she could be doing something more. When her friends tease her about always having strong opinions, she decides to start a blog, Kelsey’s Corner. Kelsey is positive her words will be her ticket to popularity. But she soon discovers a handful of good friends is far better than a baker’s dozen of insincere ones.

Chapter One: Rain or Shine

Today, the sky was dark gray and was filled with thick clouds that seemed to hang so low you could almost reach up and swat them. There were puddles everywhere, and everyone was in a sour mood, including me.

Nothing had gone really, really wrong, but it just seemed like nothing was going right, either. I felt a little sad and a little mad, and also like I might yell at someone over nothing.

Usually, Molly and I walked home after school, but Dad had been picking us up all week so we wouldn’t get drenched.

While I liked those few minutes between leaving school and getting home to clear my head a little, there was something nice about looking up and seeing Dad waiting for us, like he used to before we started middle school and started going to and from school by ourselves.

Even though he always parked in the same place, when Dad saw us he blinked his lights twice so we’d know which car was his. It was a little embarrassing, since we were in middle school now and we knew how to find our dad, but it was also a little comforting.

Most parents were on their phones, but I knew Dad was sitting there scanning the kids streaming out of school, and even in a sea of dark umbrellas, he could always pick us out of the crowd right away.

I opened the front passenger-side door and darted into the car.

Molly opened the back door on the other side and jumped in.

“Ugh!” she groaned, getting her umbrella caught in the frame of the door.

The rain was coming in sideways and the whole seat was getting wet.

“I’m trying!” she yelled as she threw the umbrella across the back of the car, splattering water everywhere.

Dad sighed and shook his head.

“Hello, you two balls of sunshine!” he said cheerily. “Everyone have a good day?”

“I hate this rain,” said Molly. “We had PE inside. And soccer practice is indoors this week.”

“The trees and the plants and the lakes like the water,” said Dad, pulling out of the parking lot.

Dad always believed in seeing the upside of things.

We were all quiet on the way home. The windshield wipers on the car went back and forth furiously, and the rain slammed into the car.

Then Dad’s phone dinged and I glanced at it. “It’s from Mom,” I said, grabbing it.

“Hey!” said Dad. “That’s my phone, not yours. You should at least ask before you answer it!”

“Nans can’t pick up Lindsay,” I said, reading my screen.

My grandmother, who I call Nans, usually picked up my cousin Lindsay after school. Lindsay’s dad, like my mom and my other uncle, Charlie, all work at the Park View Table, or the Park for short, which is the restaurant my grandparents own in town.

My sisters and cousins also do shifts at the Park. Molly and my older sister, Jenna, work on “the floor,” as they say, busing tables, taking orders, cleaning up spills, and waiting tables, like my older cousins Rich and Lily.

I’m pretty lucky because I work at Donut Dreams, which is the donut counter inside the restaurant, with Lindsay. I don’t mention this to any of them, but I think Lindsay and I have the easier job just minding the Donut Dreams counter.

“Tell Mom we’ve got it,” said Dad, turning around the block and pulling back into the school lot.

The line of cars had already left, even in that short time, so we drove right up to the entrance.

Lindsay was waiting there with her huge knapsack and a big pink umbrella with rainbows all over it. I felt bad because she was the last one waiting, alone.

Her mom had died two years ago, and since then the whole family has pitched in to help Uncle Mike, Lindsay, and her younger brother, Skylar. Nans and Grandpa live really close by, so there’s always someone around, but still, it’s times like these that it feels like she’s missing someone.

Dad flicked the lights at Lindsay. “Here we are,” he called, even though she couldn’t hear him from outside the car.

I knew then that he was thinking the same thing I was. I looked over at him and smiled.

Lindsay opened the back door and slid in. “Thanks, Uncle Chris,” she said. “Ugh, there’s a puddle on this seat.”

“It was an accident,” Molly said dramatically.

“You know what kind,” I said, turning around.

“You are kidding!” said Molly. “Stop taunting me!”

“Molly, you said you had an accident,” I said.

“Not that kind of accident!” she yelled.

“Girls, I am driving a car in the middle of a rainstorm,” Dad said, even though he was trying not to laugh.

“I did not pee on the seat!” said Molly.

“If you did,” I said, “then it would be Lindsay who was sitting in it.”

After Dad parked the car, he glanced down at his phone, reading messages from my mom.

“Linds, you’ll stay here until Nans can swing around and take you home, okay?” he said.

Lindsay paused, and Dad jumped in. “Skylar is all set hanging out at his friend Trevor’s house.”

I wondered if I would worry about Molly if she was younger than I was. We were basically the same age, only Molly was eight months older, a fact she liked to remind me of often.

We flung open the car doors and ran to the back door of the house, hurrying in through the mudroom, where Dad had built cubbies for all of us to store our coats and bags.

We dumped our wet stuff and headed into the kitchen, stopping to say hello to our dog, Rusty.

Rusty trotted to the fridge behind Dad.

“You too, Rusty,” Dad added, as he took out some dog treats.

People think that since our family owns a restaurant, we always have an open kitchen, with tons of stuff coming out of it. But of course we don’t. We just have a normal kitchen with mostly normal stuff.

Dad’s the one who does most of the cooking in our house, and he makes delicious meals, but it’s not like, Hey, let’s order this right now. We don’t have menus propped up on the walls or anything.

Still, Dad can get pretty creative with his after-school snacks.

“For a gloomy day, I think we need something to cheer us up,” said Dad. “Something… sunny.”

He rolled out four clementines from the fridge. Clementines are like little oranges, and they don’t have seeds.

“Yes,” said Dad. “And what makes everything better?”

He handed us each a clementine and told us to peel it and section it.

Then he took a bar of dark chocolate and started melting it in a saucepan on the stove, adding a 1/4 cup of sugar. He dipped each of the sectioned pieces of fruit into the melted chocolate.

He grabbed a handful of shelled pistachio nuts. He smashed the nuts into pieces with a rolling pin, then rolled the chocolate-dipped clementine sections in them. Then he arranged everything on a plate and threw it into the freezer.

“Snack in five minutes!” he said, setting the timer.

We basically just sat around for five minutes, waiting and staring at the freezer, until Dad pulled the plate back out.

The chocolate had set, so it wasn’t drippy anymore.

“Some sunshine in the form of a clementine,” said Dad. “Hey, that rhymes! A clementine dipped in chocolate is the cure-all for anything gloomy. If you can’t have sunshine, then sometimes you need to make it.”

“Wow,” said Lindsay. “At my house I usually get apple slices and graham crackers.”

“Well,” I said, biting into the delicious snack and feeling warm and cozy and much better than I had all day, “you’re in the right house. Because Dad always knows how to make everything sunny.”