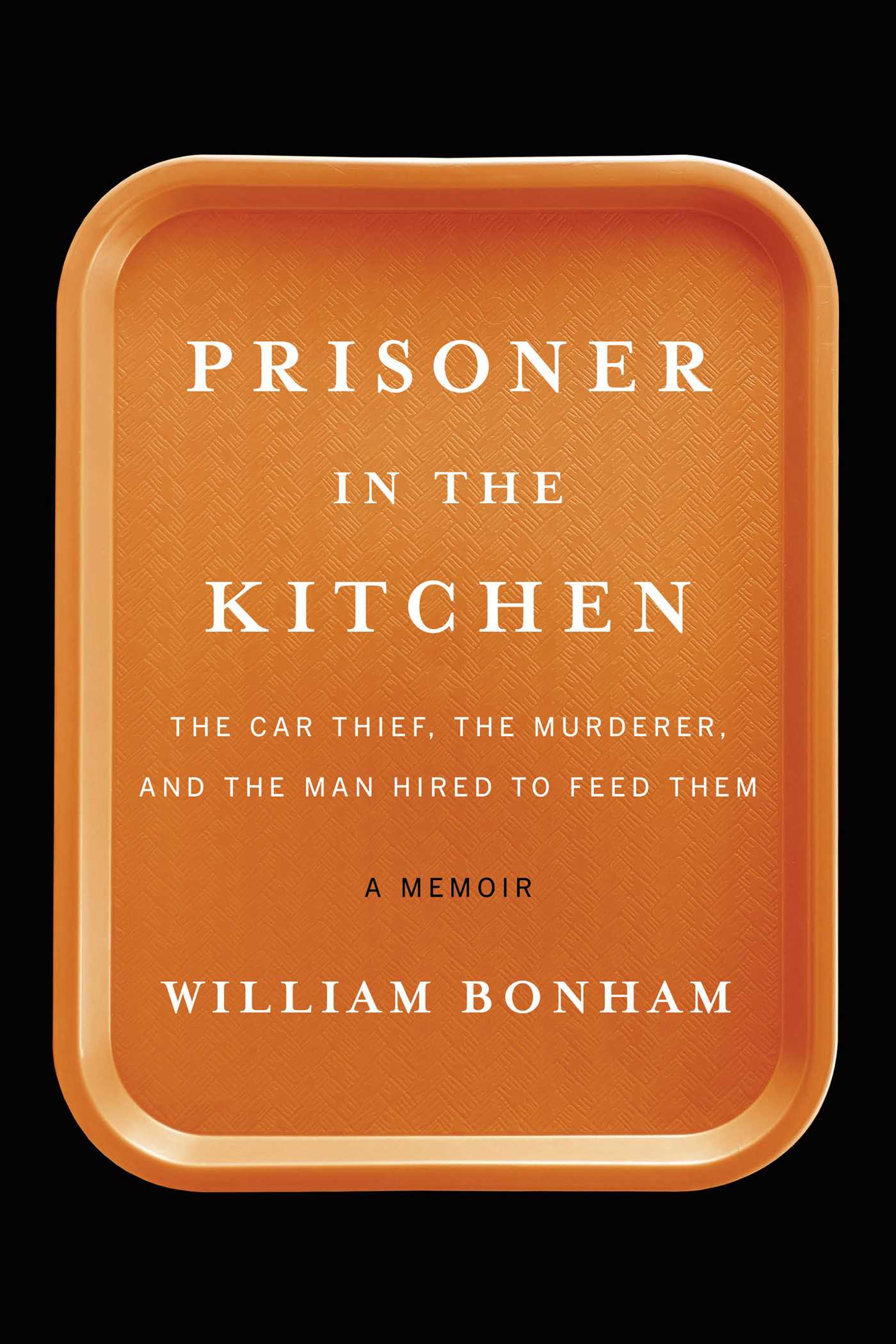 Prisoner in the Kitchen

The Car Thief, the Murderer, and the Man Hired to Feed Them

By William Bonham
LIST PRICE $7.99
PRICE MAY VARY BY RETAILER

Winner of Simon & Schuster’s memoir contest in conjunction with AARP and the Huffington Post, the memoir of a man’s coming-of-age as a civilian cook in a maximum-security prison.

In 1973, recent Montana transplant William Bonham desperately needs a job. Hoping to take advantage of his background working in restaurants and diners, he finally comes across a listing for a position offering great money and benefits—at Montana State Prison in Deer Lodge. He takes it.

As food service supervisor in the kitchen of the maximum-security prison, Bonham oversees a kitchen crew of convicts that prepares and serves each meal. Among his staff are Earl, a homely baker; Aldrich, a timid young dishwasher; Smoky Boy, the prison’s most feared and respected convict; Mackey, who claims to have cooked at Seattle’s Olympic Hotel in his pre-incarceration life; and Reed, a cook whose calm, witty demeanor wins over Bonham.

Over the next year, Bonham comes to care for his crew. Although he knows that these men have committed unforgiveable crimes, Bonham forms a camaraderie with them that borders on friendship—until a late-night incident calls his judgment into question.

Told with humor and empathy, A Prisoner in the Kitchen is the redemptive tale of Bonham’s transformation from a bright-eyed optimist who sees the good in everyone to a man who understands and revels in the complexities of human nature.

Prisoner in the Kitchen PROLOGUE NOVEMBER, 1973
If I could have just one photograph from the year I worked at Montana State Prison, it would be of footprints in freshly fallen snow, crossing the prison yard.

To get that shot, on that particular day, a camera would have had to have been placed high above the prison, looking down on the cell house in the southwest corner of the yard, tracing the strange path those footprints had taken to the kitchen and chow hall in the far northeast corner.

At the lower left of the picture you would see the footsteps of five men leaving the cell house in a ragged, disorganized group, headed on a diagonal toward the kitchen. Then, halfway to their goal, you might think something changed, for it would appear these men came to a stop, as one, and gathered in a small, tight herd.

The photograph might lead you to believe they were lost for a moment.

Whatever the reason, it would seem that here someone took charge, and suddenly footprints were on the move, all marching in a perfectly straight line, headed directly west for twenty yards. There, a precision military turn to the right took them north for thirty yards. Then another 90-degree turn, and at last they were headed back in the direction of the kitchen. They’d found their way. Thirty more yards, then a last, sharp left and the footsteps passed through a gate, leading the footprints to where they had appeared to be going in the first place: the kitchen.

Some of the footprints were mine.

Every morning at five o’clock I picked up my crew from the cell house. I only needed a few men to start the day, so just four convicts—two cooks, Mackey and Reed, a baker, Earl, and Aldrich, a dishwasher—waited for me on this morning. The rest of the crew could have another hour’s sleep.

I was an unlikely leader for this group.

I was a city boy from Seattle, and at twenty-three, I looked closer to twenty, thanks to a rosy complexion and a face that would have looked right at home peeking over a hymnal. There was an innocence to my features that I hated, and nothing at all to suggest I was a prison cook. I also looked younger because I wore my brown hair long, nearly down to my collar. This was Deer Lodge, Montana, where men had neatly combed hair or a crew cut. It may have been 1973 in the rest of the world, but in Deer Lodge it was 1955.

The four convicts, unlike me, were all rough Montana men. Any one of them, on looks alone, might cause you to cross the street, glance over your shoulder, and look around for a cop.

Earl, the baker, got the worst of the deal. He hadn’t been dealt a good-looking—or even a reasonable-looking—face in the first place, and a great many fists had headed his way over the course of his thirty-some years, leaving his nose in disarray. Aldrich, the twenty-year-old dishwasher, was small and thin, the tagalong bad boy of this group, but able to twist his face into an impersonation of a street thug’s. Mackey, a very good cook, had a narrow face only marginally more attractive than Earl’s, but without the collateral damage. Only Reed, the other cook, came out looking reasonably well. In his midthirties, he was tall and broad shouldered, with sandy hair worn in a flattop and sleepy eyes. Still, head to toe, he was not a man to mess with.

All were barely awake that morning, wearing thick, prison-issued khaki coats for the chilly walk across the yard. I said good morning, turned, and had them follow me out of the cell house.

When we stepped into the yard, we entered a wonderful illusion I’d noticed after another snowfall a few weeks before. As I looked straight ahead, a complete absence of color overwhelmed my eye. There has to be color—the world is in color—but not inside the prison: No trees or bushes provided a hint of green. No cheery yellow building added a burst of brightness. From the brilliance of the white snow to the dark grays of the corrugated-steel chow hall and the deep black shadows of the stone prison wall, there was no color here. For the few minutes it took to cross the yard I walked in an old black-and-white movie.

On this morning, halfway to the kitchen, my black-and-white reverie was broken by a sharp voice.

“Stop where you are!”

We halted, huddled in the center of the yard. I looked toward the sound, up to Tower 4, twenty-four feet above our heads. The guard on duty had left the tower and now stood on the wall, a silhouette framed in the classic guard position: his legs spread, his hands holding a rifle butt end down and barrel pointed to the sky.

We were all completely awake now, alert. Behind me, the convicts were starting to mutter under their breath: “What the hell?” Earl said.

“What is this crap?” Mackey sighed.

The sight of the rifle had shaken them, and their voices held a nervous edge.

I was shaken, too, and confused. I had no idea what this crap was.

The guard called down again.

“What the hell do you think you’re doing?”

Behind me I heard Mackey.

It was, indeed, Melton.

Ted Melton usually worked the day shift and was legendary for his incompetence. He liked to stand in the shadows of the tower, playing fast draw with his .38 revolver. That game came to an end the day the gun flew from his hands and out the window of the tower, landing at the feet of some convicts in the yard. That set Melton screaming.

The convicts had laughed at him and stayed away until an officer in the yard picked up the gun. Melton had lowered a bucket attached to a rope, and the gun returned to the safety of Tower 4.

From that day on, everyone called Ted Melton “Teddy”—or worse, “little Teddy Melton.”

I had heard about this incident and had met Melton briefly, but thought that—because I was new—perhaps he didn’t remember me. So I explained.

“I’m Bonham. I work here. I’m taking the crew to the kitchen to make breakfast.”

I’d started with fear and confusion, but now frustration made its move.

“I don’t have to call the cell house. You have to follow the rules!”

For a month and a half I’d walked these same convicts across the yard in the same way. “What are you talking about?”

Teddy was patient, ticking off the rules like a school hall monitor: “Well, first off, you walk in a straight line. You walk single file. And you don’t walk catty-corner across the yard! You walk on the sidewalk!”

It was asinine. I opened my arms to take in the whole of the snow-filled yard.

“And where in hell is the sidewalk?”

“Oh, I think you know where the sidewalk is,” Teddy said, his voice filled with sly knowledge.

Yes, of course I did. I’d said something stupid, and it came back to bite me.

Behind me, I heard hushed advice.

“End this bullshit, do what he says,” Earl said.

“Just do what he says!” Aldrich urged shakily.

Mackey had a warning: “You don’t know what a guy like that’s gonna do. Just head for the sidewalk.”

There was silence for a moment as I tried to come up with some last smartass remark to put Melton in his place. Finally, Reed spoke for the first time. He rarely had much to say, but when he did speak he usually cut through whatever nonsense was in the air, summing up a situation in a pithy sentence, the words sliding out of his mouth at the pace of molasses.

“The man with the rifle wins, Bill,” he said.

We never used first names at the prison, and by using mine Reed let me know he was giving friendly counsel. He was right.

Angry now, I turned and took aim straight at the sidewalk.

When I hit the general area of the sidewalk I took a sharp, military right and marched thirty yards, hoping Melton could see the sarcasm in my walk. The sidewalk headed west, and I snapped a 90-degree right turn and ground out another thirty yards. Our journey was almost over. We took a precision left, marched for ten feet, and stopped, standing in a rigid line, waiting. High on the wall in Tower 4, Teddy pressed a button to open the gate. With a last, straight forty-foot walk we entered the kitchen, leaving the mystery trail behind us.

The crew went to work, but as they did they complained about the rifle. It was too much. What was wrong with Melton?

Reed said nothing and went about starting breakfast, bringing flats of eggs and meat from the walk-in, turning on the stoves, and starting a pot of oatmeal. We were warned at orientation about getting too close to convicts; it was a mistake to like or dislike them. But I did like Reed.

I should have listened to the warning.

By now, Melton was likely back in his chair, fondling his arsenal.

Later that day, I raised some loud objections about the rifle to a lieutenant and to my boss, Bill Perdue. They agreed the rifle had been an overly dramatic response, and Melton ended up with another reprimand. For the rest of the year, Melton would occasionally pop out of the tower, say something pointless, then go back in.

But he wasn’t allowed to play with guns anymore.

Prisoner in the Kitchen

The Car Thief, the Murderer, and the Man Hired to Feed Them

By William Bonham
LIST PRICE $7.99
PRICE MAY VARY BY RETAILER