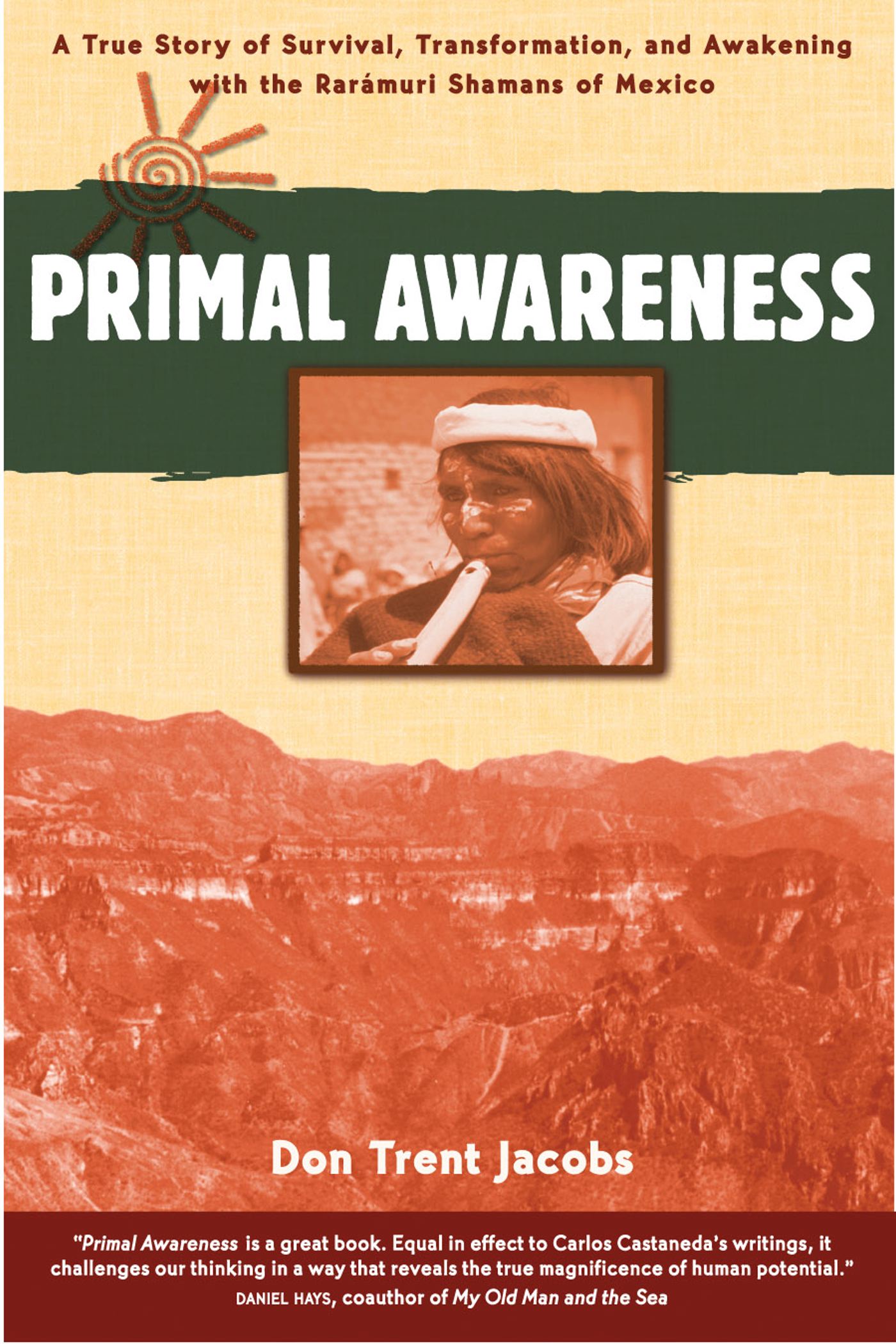 • Explores the innate knowledge that exists within us all, a "primal awareness," that can help us to live in harmony with our world

• Shows how we can rediscover this unseeable realm

In 1983, caught in a violent rainstorm while kayaking the Rio Urique in Mexico's Copper Canyon, Don Trent Jacobs was swept into an impassable catacomb of underwater tunnels toward what he believed was certain death. But instead of panic, Jacobs found himself filled with a strange consciousness that left him feeling at peace and invigorated with a confidence he had never before known. Moments later he was spit from the tunnel alive--not at the end of his journey, but only at its beginning.

Primal Awareness tells the story of Don Trent Jacobs's remarkable vision of the human mind and heart and the compelling spiritual quest that brought him to it. Through his experiences with the Raramuri people of Mexico and his research of other indigenous societies, Jacobs identifies what he calls our "primal awareness," an innate knowledge that exists within us all. Jacobs shows how we can rediscover this primordial mandate that unites all things and that helps us to find our own inner strength an harmony.

In an hour rain rapidly turned the sparkling clear water into a maelstrom of brown and white frothy energy. Increasingly, waterfalls cascaded down both sides of the canyon from creeks and crevices, giving a new perspective to the upthrust tilting of the rocks and the great volcanic sheets of vertical frozen lava. The raging river now confirmed Jenkinson's description. He had written in his journal, "In high water, the Urique may be the most violent river in America. During the rainy season, some Urique rapids seem like science fiction."
We stopped to put on rain gear. Within minutes the rock we had hauled our boats on was submerged. The increasing flow of the river and the difficulty of the rapids was beginning to exceed our skills. Searching for a place to safely exit the rising water, we rode the white waves into a narrow, mysterious canyon. Before us granite walls soared straight up on either side of the twisting river. Gray mist rose to meet the falling rain and glistened in the broken rays of the sun. Gigantic black, red, and white boulders stretched from one sheer wall to the other. The rocks were so crowded that the river all but disappeared through a labyrinth of cracks and deep tunnels. Jenkinson's party had painstakingly portaged their boats around this section and wrote of this area, "There is no way anyone will ever run this rockfall in any level of water."
Jenkinson's words proved true. It was my turn to lead, and Dave waited behind until I could reconnoiter. Too cold and anxious to follow our normal procedure of climbing a rock to scout what was ahead, I instead dropped into what appeared to be a quiet pool above the next set of rapids. As soon as I reached the pool, I realized that it merely feigned tranquillity. The whole river was backed up, patiently waiting to empty itself into a drain no more than two feet wide at the base of a huge boulder!
I desperately paddled upstream but kept getting pulled closer and closer to the hole that was swallowing sticks and leaves like a hungry beast. Fatigue soon overtook me, and my boat slammed into the hole, lodging halfway in, up to where the boat was too wide to enter. Perhaps it is not my time to go, I thought. I turned around and placed my hands on the huge rock wall in front of me, trying to balance myself amid the turbulent waves passing under and over the boat. While holding on to the rock wall for several minutes, I searched for ways to escape what I thought would be certain death in the hole.
Strangely, in spite of the chilling rain, the rock warmed my hands. Suddenly, a mysterious calm overcame me. A heightened sense of awareness propelled me into a multidimensional universe. Fear itself became a vibratory sensation that brought forth colors of perception words cannot describe. Confidence filled me. I continued searching for a way to survive, but something was telling me that what was about to happen was important and that I should not fear it.
These feelings pulsed through me like a current of electricity being emitted from the rock. Then I looked up and saw a chance for survival. A piece of driftwood from a previous flood was lodged in a hole in the rock several feet above my head. If I could reach it, I could climb to safety. As I stood to grab the log, however, a violent wave suddenly flipped my boat, and I disappeared into the cold, wet darkness of the hole.
When I went under, there was no doubt in my mind that I would drown, but instinctively I held my breath. The remarkable feeling of calm and peace came over me again. My entire life passed before me in a series of snapshots. With each one, I sent out loving thoughts to the characters and experiences they depicted. I embraced my family and friends. I prayed for Dave's survival and safe return home. Although my eyes were closed, I sensed a radiant white glow of energy swirling about me. For a moment I thought I heard voices echoing an indescribable musical pattern of harmonies and rhythms. Then, just as I was out of air and about to drink the river into my lungs, the tunnel spit me out into the hazy daylight.
Knowing I had come out on the other side of the rock boulder, I scrambled to grab hold of a jagged rock and pulled myself out of the rising water to avoid being swept downstream. Somehow negotiating the sheer canyon wall, Dave had managed to drag his boat along the river's edge until he reached the other side of the large rock wall through which the tunnel ran. Without speaking, we climbed to the top of the great boulder. Dave lowered me down so I could reach my boat, which was still stuck at the entrance of the hole. I punctured each pontoon with a pocketknife and Dave pulled me back up to the safety of the ledge. We waited. Finally, the boat and its secured contents passed through the tunnel as I had. Still not saying a word, we patched it, blew it up, and forged downstream in search of a safe haven. Fortunately, around the next bend we came upon a large cave that was cut into a steep, grassy wall to the right of the river. We were more than thankful, for the river was now running at least six thousand cubic feet per second, and it was doubtful we would have survived the next set of rapids. For three days Dave and I waited for the rains to subside. The cave sparkled with swirls of quartz under the glow of occasional rays of sun streaking through an opening high above us. Each evening the flooding river forced us to climb higher and higher…
Don Trent Jacobs

Don Trent Jacobs earned a doctorate in health psychology while training wild horses, playing piano in nightclubs, and working as an EMT. He holds a second doctorate in education renewal and is the Education Department Chair of the Oglala Lakota College on the Pine Ridge Reservation in South Dakota. He is the author of The Bum's Rush: The Selling of Environmental Backlash and seven other books.

"Primal Awareness is a great book. Equal in effect to Carlos Castaneda's writings, it challenges our thinking in a way that reveals the true magnificence of human potential."

– Daniel Hays, coauthor of My Old Man and the Sea

"Although some articles have been written about what is happening to my people regarding the drugs, lumbering and violence, only Don Jacobs has captured the spiritual understandings that have allowed us to live in balance for thousands of years. As a recipient of the Goldman Environmental Award, as the Directorof the Sierra Madre Alliance and as a half-Raramuri Indian, I can say without reservation that Primal Awareness will help make the world a better place if enough people read it. I agree with Dan Millman's review of the book when he said it is a 'suspense story that embraces realms of psychology, anthropology and magic."

"A philosophical quest for the lost ark, filled with adventure.

– Sam Keen, author of Fire in the Belly

"Don Jacobs is a renaissance man who has written an adventure story that reflects his depth of experience as well as his heart.Primal Awareness is compelling reading with a profound impact. Both suspense story and spiritual quest, it embraces realms of psychology, anthropology, and magic. As I turned its pages, I was moved to laughter and tears. I highly recommend it to anyone interested in the mysteries of the human mind and heart."

– Dan Millman, author of Way of the Peaceful Warrior, and Everyday Enlightenment

"Don Jacobs has uncovered the roots of indigenous psychology that all people share and that, once found, can lead to harmonious living."

"A fantastic tale of unbelievable magnitude."