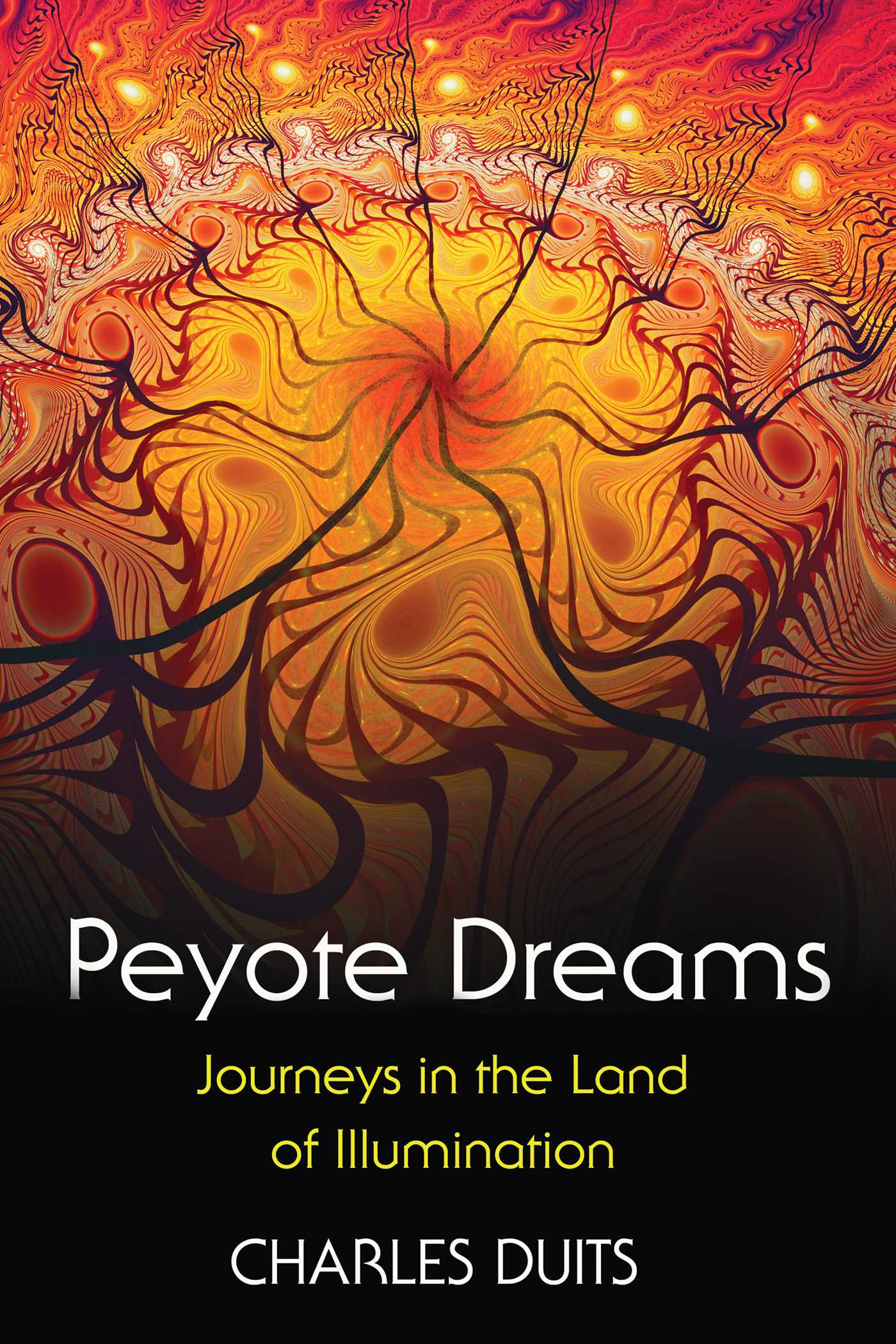 • Shows how peyote and other visionary plants do not distort reality but gloriously unveil it, pulling the mind out of its cosmic slumber and revealing our unity with all life

Charles Duits was caught in the grip of a dead-end existential and spiritual crisis. At the urging of one of his oldest friends, he takes peyote “like a man committing suicide,” launching him on a visionary journey of philosophical examination and spiritual revelation.

In this little-known classic of drug literature, we find a detailed account of the radical alteration of consciousness and discovery of life’s purpose brought on by the Mexican cactus known as peyote. Consuming peyote more than 200 times, Duits lucidly describes the transformation of reality he experienced as well as the necessity to consciously work on oneself and remain the master of one’s mind in order to avoid getting carried away by hallucinations. The author examines how modern society’s revulsion to sacramental plants and other consciousness expanders is deeply rooted in Western philosophy’s embrace of reason and materialism at the expense of inner knowledge. He explains how sacramental plants do not distort reality as many fearfully believe but gloriously unveil it, pulling the mind out of its cosmic slumber and revealing a world that is finally real and full of meaning.

Poetic yet precise, Duits’s descriptions of his peyote experiences offer a glimpse in to the beautiful divine reality of which we are all a part, yet over which the structures of society cast a veil. This guide to “sailing the inner sea” reveals that the answers to the meaning of life lie not in material pursuits but in experiencing the richness and unity of the world in front of us.

Dark strangers, if we began!
--Rimbaud

In 1956 one of my oldest friends came to France. He came like the king of Salem, Melchizedek, bearing bread and wine. However, this bread and wine gave every indication of being poison.

It was a greenish powder with large seeds that smelled like mildew and had a very bitter taste. The plant, which David had dried and ground to make this powder, was regarded by the Indians of Arizona as sacred, and they called it “Christ’s gift to the red man.” They would consume it on Saturday evenings and spend the night in front of a fire; the following morning, they would attend the religious services at the neighboring church. To the pastor’s protests, they responded that the white man had railroads and airplanes, but that they had this plant, this cactus. One was compensation for the other.

This Peyote cactus was completely harmless according to David. He had me read Huxley’s study and various scientific publications that he had brought with him. I was intrigued but hostile. My hostility would have been much sharper had I read Miserable Miracle, which had just been published. But I would only get wind of that book later.

A rift formed in our friendship. David refused to take my moral and intellectual objections seriously. In his opinion it was fear and fear alone, beneath my refusal to cross the threshold of the unknown. Whether intentional or not, a slight air of scorn began to color his affection.

And I felt the exact same sentiment toward him. Whether peyote was harmless or not, whether or not it was addictive, its use implied a denial of reality. Worse, it was a cowardly refusal disguised as an escape to adventure.

The prospect of seeing and feeling what a powder forced me to see and feel, to even temporarily renounce my freedom, filled me with horror. I had no desire to dream, I wanted to live. David smiled and shook his head: “That’s not it at all. . . . You cannot understand.”

But during that summer, dark forces were storming in and carrying me away on their wave of mud.

I ran out of arguments to oppose David’s. The use of hallucinogens was a weakness: so be it. One proof among others, it implied a cowardly refusal: again, so be it. I needed to increase the distance between myself and my failures. If the sole available refuge was an oneiric miracle, I would consent to hide there.

I no longer knew how to live, believe, and love. I was already a lost man, might as well consume my perdition. It was the first of August 1956 that I attempted this version of suicide.

Irritable and anxious, I paced the hundred steps of the garden of the house I was occupying that summer in Antibes. I detested myself; I detested what I saw, what I felt, and what I was doing. I then headed down Ermitage road. I felt a moment of distraction. It lasted for--a second?--the time it took to raise my eyes to a laurel hedge. I was in paradise.

I had to take peyote numerous times before realizing the importance of the moment of distraction. It is the passage into the unknown, a gift of the self, a gift without which it is impossible to cross the threshold. On the first day, I simply noted that fear and doubt had vanished, that I could no longer grasp how anyone could fear and doubt. This was paradise. A world in which the “big questions,” the questions all humans ask, were emptied of their content. A world full of meaning.

I had spent thirty years sleeping. Now I was shaking off the glamour of the night; I got up. Phantoms, morbid imaginings, “the transparencies and thickenings of the dream” as Hugo said, all that was wild and nebulous had dissipated. I was finally free, truly free; I was the master of my body and my mind; I no longer feared death.

Before taking peyote, I thought that this plant, like others of similar nature, created an unreality. No matter how interesting and enthusing the studies of Baudelaire and De Quincy were, they mainly contained descriptions of dreams, or distorted iridescent spaces made up of echoes and reflections, of spaces that a momentary disruption of the senses seemed to relieve of their density.

It so happens that far from veiling reality, peyote unveils it. And, because the sensation that accompanied this unveiling was glorious, it can legitimately be called a revelation. Peyote revealed to me a world that was finally real, and real because it was full of meaning, engorged with meaning like a fruit is with flavor. It removed the film of insignificance that ordinarily covers things. It showed them to me in their nakedness. Appearance no longer concealed essence but expressed it. Or rather, the distinction I made between essence and appearance had vanished. The tree was completely a tree, the stone was stone, and the sky was sky. And me, I was me.

There is a barbaric word in bureaucratic parlance: normalization, that is especially familiar to outsiders, people like me caught in a situation that is desperately and even ontologically irregular. This word precisely describes the sensation caused by peyote when you surrender and give yourself to it. Peyote normalizes. Each time I have been able to abandon myself to it, I have experienced the joy of no longer being an exception, a cripple, one of those beings who is neither an angel nor an animal, but simply a man.
Charles Duits

Charles Duits (1925-1991) was a French writer and surrealist known for his heroic fantasy saga novels Ptah Hotep and Nefer. He began his writing and philosophy work at the age of 17, after sending some of his poems to André Breton who then invited him to participate in the experiments of his surrealist group. He frequently met with Anaïs Nin, who speaks of him in her Journal. A student of Gurdjieff’s Fourth Way and Zen Buddhism, he was the author of 11 books and novels in French.

“There is much to be enjoyed from Charles Duits excellent use of language in Peyote Dreams: Journeys in the Land of Illumination. His use of philosophical ideas intermingled with the peyote landscape demonstrates a deep learning on his behalf, and a lucid writing skill at communicating them. For the New Age reader the book could well provide a host of engaging spiritual ideas, and Duits distrust of the mainstream Western traditions certainly key in with modern spiritual notions about a Western society devoid of its soul. For the cultural historian, it is key pharmacographical exemplifier from the period, and it is great to have a new English language edition available.”

“There is much to be enjoyed from Charles Duits excellent use of language in Peyote Dreams: Journeys in the Land of Illumination. His use of philosophical ideas intermingled with the peyote landscape demonstrates a deep learning on his behalf, and a lucid writing skill at communicating them. For the New Age reader the book could well provide a host of engaging spiritual ideas, and Duits’s distrust of the mainstream Western traditions certainly key in with modern spiritual notions about a Western society devoid of its soul. For the cultural historian, it is key pharmacographical exemplifier from the period, and it is great to have a new English language edition available.”

"With insightful thoughts and vivid language, Duits takes his readers along as he recounts his own experiences and, more importantly, his thoughts about them. A lively and informative read."

– Thomas B. Roberts, author of The Psychedelic Future of the Mind and editor of Spiritual Growth with

"Brilliantly and poetically written, completely engrossing, and magically able to describe the indescribable--the majesty and inner drama of the peyote journey--Duits’s work is reminiscent of (but maybe even richer and more evocative than) Huxley’s writings on his own mescaline journeys."

– Ross Heaven, author of Cactus of Mystery and Shamanic Quest for the Spirit of Salvia