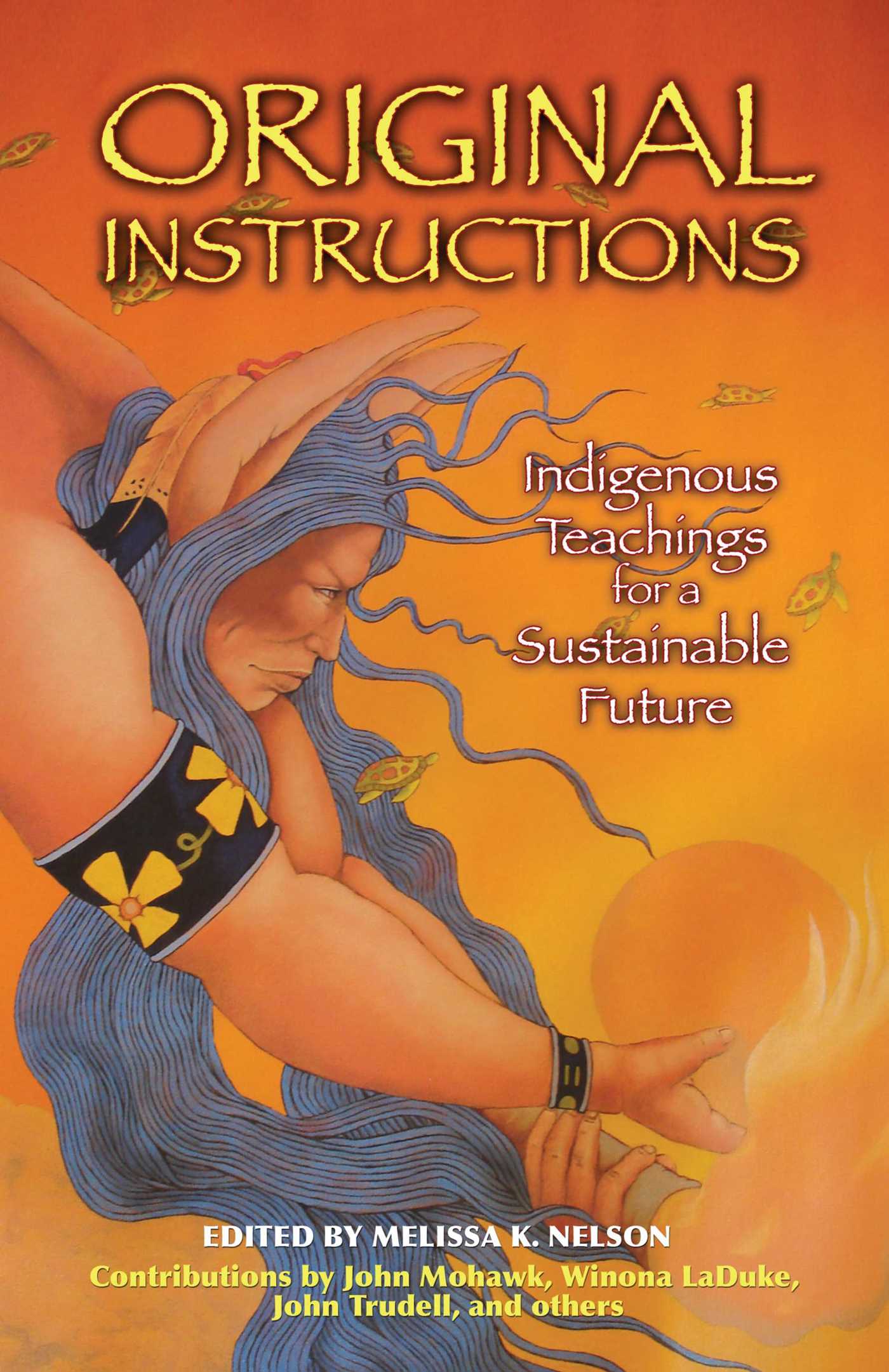 For millennia the world’s indigenous peoples have acted as guardians of the web of life for the next seven generations. They’ve successfully managed complex reciprocal relationships between biological and cultural diversity. Awareness of indigenous knowledge is reemerging at the eleventh hour to help avert global ecological and social collapse. Indigenous cultural wisdom shows us how to live in peace--with the earth and one another.

Original Instructions evokes the rich indigenous storytelling tradition in this collection of presentations gathered from the annual Bioneers conference. It depicts how the world’s native leaders and scholars are safeguarding the original instructions, reminding us about gratitude, kinship, and a reverence for community and creation. Included are more than 20 contemporary indigenous leaders--such as Chief Oren Lyons, John Mohawk, Winona LaDuke, and John Trudell. These beautiful, wise voices remind us where hope lies.

Cultural Change, Climate Change, and the Future of Civilization

The most foolish thing that the United States government has ever done was to launch a centuries-long campaign to eradicate indigenous cultures. A great deal of profound knowledge and wisdom was lost--wisdom we could desperately use today.

About thirty years ago, I was attending a meeting at the Onondaga longhouse in New York, and the guests at that longhouse were from Hopi country in Arizona. One of them, Thomas Banyaca, a translator for some of the Hopi elders who had journeyed to us, had a story from the elders to tell. Their story was that the world had more or less come to an end a few times, but that some native people had survived, and they’d come to be aware that it was an inattention to and a disrespect for nature that had been at the root of their problems. Life on earth had been threatened, and certainly civilization had been threatened, because people had abandoned a respect for nature. And now this was happening again.

The elders had sent Thomas forward to try to explain this to the world, to give us all a warning. (At one point he even addressed the United Nations.) The elders also said we should look at the white men’s written records to find evidence to support what they were saying. I took that job on and began to do research. I discovered that the anthropologists who looked at the Maya civilization and its very curious collapse in the ninth century have been puzzled. It doesn’t seem that the Maya were overwhelmed by invaders or had a devastating internal civil war. It looks as though there had been a huge population, especially living around Tikal, and that suddenly in the space of 100 years--around 900 AD--their civilization collapsed and the people disappeared. There’s no evidence that they migrated, because there’s no corresponding evidence of increased populations in some surrounding area. It looks as if they simply vanished.

One intriguing hypothesis suggested that sudden climate change might have been to blame. Scientists looked at ice cores from Greenland corresponding to the period around 900 AD and discovered that that century had been extremely cold, far colder than usual. They used computer simulations to look at what the global climate would likely have been under those conditions of extreme cold in the northern latitudes. Drought in Central America was one predicted outcome. It turns out that one of the symbols that comes up a lot in Maya inscriptions, at this time of collapse, is the symbol for drought. Core samples of deep layers of mud from lakes in Mexico confirmed that a severe drought had indeed occurred at that time.

When we come to the desert Southwest, we find a lot of evidence of civilizations there that became quite sophisticated in the use of irrigation. They dug canals, made holding ponds, and so on. But there, too, several civilizations simply vanished, leaving behind impressive buildings such as the Mesa Verde complex. Something happened.

In Bolivia and Peru, agriculture found its way into the most extreme environments, environments that were higher up the mountains, further into the desert, and deeper into the rain forests. Not only that, but these indigineous peoples discovered, cultivated, transformed, and changed more species of plants into cultivars (food crops) than any other complex of cultures in the history of the world. Those Andean cultures created more than 3,000 varieties of cultivated plants--an almost mind-boggling achievement.

Incan society organized itself to be able to grow food in very different ecosystems under very different conditions to make sure that in the years when food supplies failed in one place, the people in that place didn’t starve because some place else people had a successful growing season. They understood that reciprocity was a survival strategy, and they carried this practice on for centuries. In fact, they were growing more and better food in the Andes than they are now.

Starting around about the fourth century AD, the area we now call Central Asia, those huge steppes then populated mostly by nomadic herding cultures, also suffered severe climate changes including drought and extreme cold weather that began to cause some of these tribes of herdsmen to move en masse, eventually pushing some groups into Europe. These massive population movements and invasions ultimately pushed the tribes living north of the Roman Empire (Goths, Visigoths, and Vandals) into Italy to topple Rome. There were other factors in the decline and fall of Rome, but this climate change most likely played a crucial role. These past episodes may offer us clues about the future of our civilization. They show us, at the very least, that civilizations can be very fragile in the face of climate change.

Later, in the late Middle Ages and beyond, an overcrowded, filthy, and highly unsanitary Europe was having to contend constantly with the “Four Horsemen of the Apocalypse”--disease, war, famine, and death--while in America the problems were different. The climate kept changing and civilizations were collapsing. But the Indians were learning how to cope with it, discovering how to plant plants that survived drought and cold weather. They were creating a version of what some people today call “permaculture,” but a permaculture for the ages that understood that climate wouldn’t necessarily remain stable.

That’s why I say the stupidest thing the colonists and their governments ever did was to suppress Indian culture, because climate change is coming again, and those cultures had a lot of very practical knowledge about how to adjust and survive. A high-tech civilization that depends on running water, electricity, bridges, and so on is far more fragile than we realize. The Hopi were right: Western civilization will face the same kind of challenges the ancient civilizations faced, but we’re not ready to deal with them. Hopi elders have some important messages for us, but, so far, we’re not listening.

“Buckminster Fuller once complained that the earth had come without a good operating manual. In fact, though, there are an awful lot of instructions that have stood the test of time. Since we’re clearly making a mess of things at the moment, it might be wise to pay some attention.”

“Original Instructions shows how human beings can actually play a richly positive role in the web of life as a keystone species that creates conditions conducive to life for all beings. Here is the sacred geography of a world where all life is revered and animated by spirit.”

– Kenny Ausubel, author of When Healing Becomes a Crime and coexecutive director of Bioneers

“Melissa Nelson, in collaboration with Bioneers, has produced an invaluable resource of Indigenous wisdom. This book is a must-read for every socially conscious political leader, member of the clergy, educator, activist, community worker, and entrepreneur interested in participating in the creation of a new and more ecologically sound worldview, one that will be capable of sustaining society in an era of significant global climate change.”

"These indigenous activists have much to share, and they serve as crucial voices in the worldwide effort to restore our ailing planet."

" . . . a remarkable reminder that there are people out there doing critical work to safeguard our very existence. This book contains detailed information about the current programs and teachings from some of the best minds on the subject."

" . . . will appeal both to New Age and Native American collections . . . an eye-opening survey of sacred geography and a spirit-driven world."

" . . . this book presents 'How To' earth wisdom that should be at the forefront of global efforts to restore the planet."

" . . . cogent advice on how people in the world's old growth indigenous societies conduct their relations with each other and the Earth--are couched here in starkly modern terms as questions of sustainability become global fare. . . . The subject matter of this book is eclectic, ranging from toxic chemicals to global warming, changing roles of women, revival of Native languages, "bio-justice", "bio-ethics", and "bio-democracy".

"The general themes running through the writings . . . are all very applicable to current problems, and thought provoking. The book has a wealth of information, and many resources for further research and study."

"I highly recommend this book. It's the dawning of an era and we must do our part to ensure a positive future for our children."