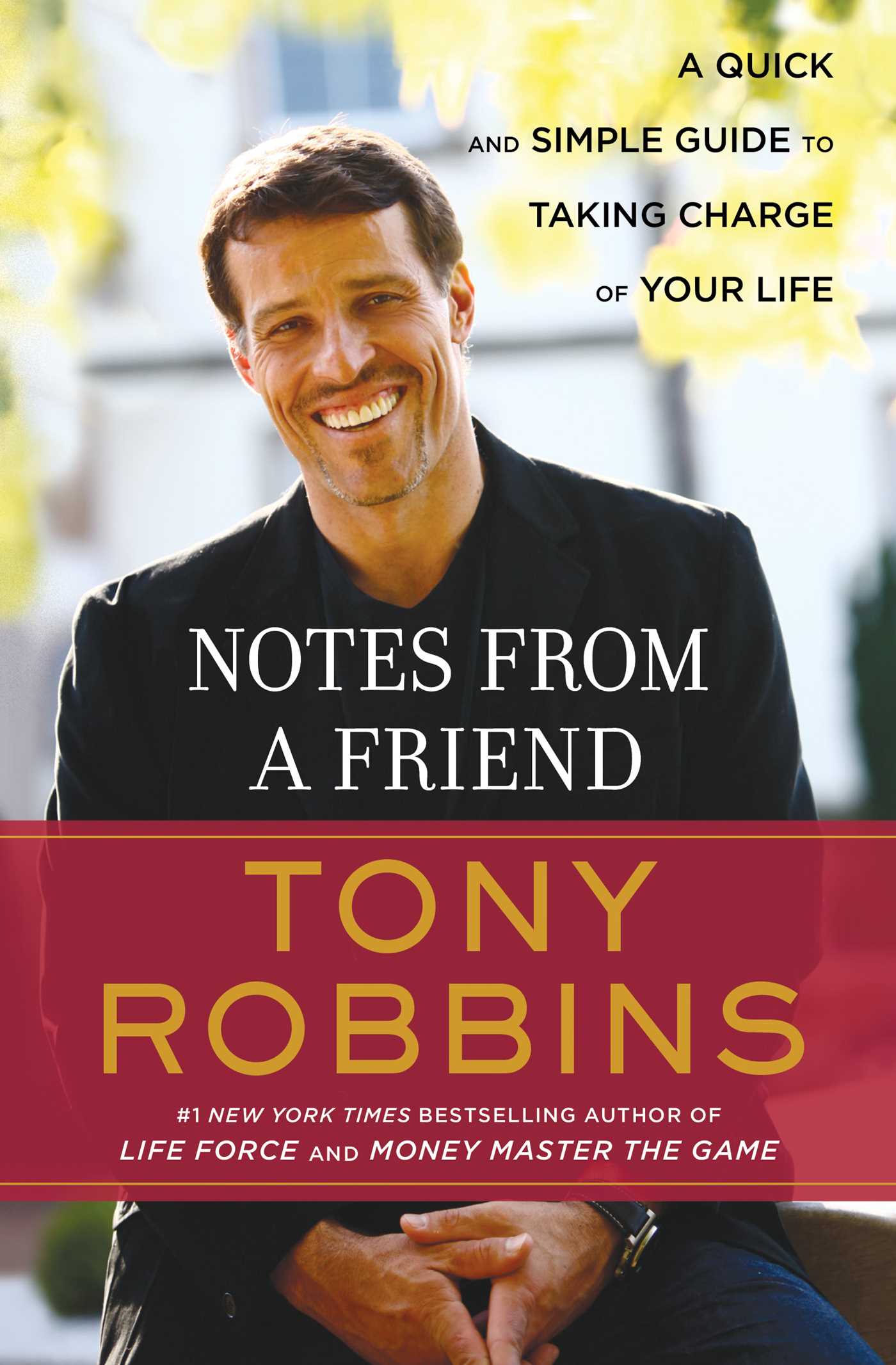 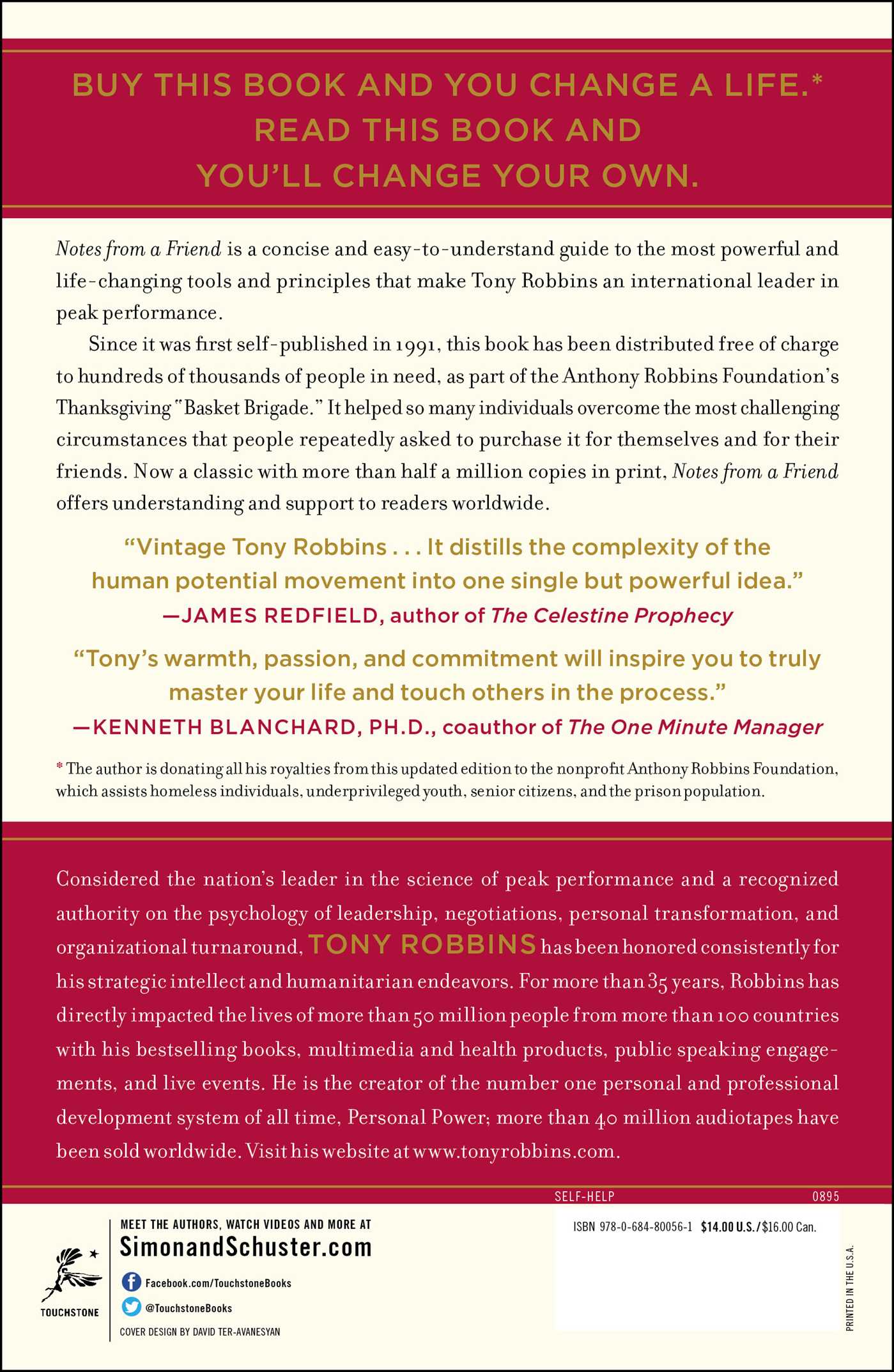 Notes from a Friend

A Quick and Simple Guide to Taking Control of Your Life

By Tony Robbins
LIST PRICE $16.00
PRICE MAY VARY BY RETAILER

Now updated with new material, Notes from a Friend is a concise and easy-to-understand guide to the most powerful and life-changing tools and principles from Tony Robbins, bestselling author and an international leader in peak performance.

Starting in 1991, a self-published version of this book has been handed out to thousands of people in need, as part of the Tony Robbins Foundation’s Thanksgiving “Basket Brigade.” The book helped so many individuals overcome the most challenging circumstances that people repeatedly asked to purchase it for themselves and for their friends. Now, for the first time, it is available to you in this special, updated edition containing new material.

Feeling Overwhelmed...How to Turn It Around

Often in life, events occur that we truly can't control. The company we're working for "downsizes" and we get laid off. Our spouse leaves us. A family member becomes ill, or someone close to us dies. The government cuts a program we've depended on. In these situations, we may feel as if there is simply nothing we can do to make things better.

Maybe you've had the experience of trying everything you knew to get a job, to help your family, to find your soulmate, or just to feel happier. But nothing seemed to work. When we try a new approach, try our best, yet we still fail to reach our goal, often we fear trying again. Why? Because we all want to avoid pain! And nobody wants to fail again. Nobody wants to give his or her all, only to be disappointed. Often, after many of these experiences of disappointment, we stop trying! We get to the point where we believe that nothing will work.

If you find yourself at the point where you're not even willing to try, you've put yourself in a place called "learned helplessness." You've literally learned -- or taught yourself -- that you're "helpless."

The good news is that you're wrong. You can make things happen! You can change anything in your life today by changing your perceptions and changing your actions.

"I am not discouraged, because every wrong attempt discarded is another step forward."

The first step to turning your life around is getting rid of this negative belief that you can't do anything or that you're helpless. How can you do that? Often the reason that people say they can't do something is that they've tried things in the past that haven't worked. But remember -- and I've used this phrase again and again throughout my life -- YOUR PAST DOES NOT EQUAL YOUR FUTURE. What matters is not yesterday but what you do right now. So many people are trying to drive into the future using a rearview mirror to guide themselves! If you do that, you'll crash. Instead you must focus on what you can do today to make things better.

Many people tell me, "I've tried millions of ways to succeed, and nothing works!" Or, "I've tried thousands of ways!" Think about it. They probably haven't even tried hundreds of ways to change things, or even dozens. Most people have tried eight, nine, ten ways to make a change, and when it hasn't worked out, they've given up.

The key to success is to decide what's most important to you and then take massive action each day to make it better, even when it doesn't look as if it's working.

I'll give you an example. Have you ever heard of a guy named Colonel Sanders? Of course you have. How did Colonel Sanders become such an unbelievable success? Was it because he was born wealthy? Was his family rich? Did they send him to a top university like Harvard? Maybe he was successful because he started his business when he was really young. Are any of these true?

The answer is no. Colonel Sanders didn't begin to fulfill his dream until he was 65 years old! What drove him to finally take action? He was broke and alone. He got his first Social Security check for $105, and he got mad. But instead of blaming society or just writing Congress a nasty note, he started asking himself, "What could I do that would be valuable for other people? What could I give back?" He started thinking about what he had that was valuable to others.

His first answer was, "Well, I have this chicken recipe everyone seems to love! What if I sold my chicken recipe to restaurants? Could I make money doing that?" Then he immediately thought, "That's ridiculous. Selling my recipe won't even pay the rent." And he got a new idea: "What if I not only sold them my recipe but also showed them how to cook the chicken properly? What if the chicken was so good that it increased their business? If more people came to see them and they made more chicken sales, maybe they would give me a percentage of those additional sales."

Many people have great ideas. But Colonel Sanders was different. He was a man who didn't just think of great things to do. He put them into action. He went and started knocking on doors, telling each restaurant owner his story: "I've got a great chicken recipe, and I think if you use it, it'll increase your sales. And I'd like to get a percentage of that increase."

Well, many people laughed in his face. They said, "Look, old man, get out of here. What are you wearing that stupid white suit for?" Did Colonel Sanders give up? Absolutely not. He had the # 1 key to success; I call it personal power. Personal power means being persistent in taking action: Every time you do something, you learn from it, and you fred a way to do it better next time. Colonel Sanders certainly used his personal power! Instead of feeling bad about the last restaurant that had rejected his idea, he immediately started focusing on how to tell his story more effectively and get better results from the next restaurant.

How many times do you think Colonel Sanders heard no before getting the answer he wanted? He was refused 1,009 times before he heard his first yes. He spent two years driving across America in his old, beat-up car, sleeping in the back seat in his rumpled white suit, getting up each day eager to share his idea with someone new. Often, the only food he had was a quick bite of the samples he was preparing for prospective buyers. How many people do you think would have gone for 1,009 noes -- two years of noes! -- and kept on going? Very few. That's why there's only one Colonel Sanders. I think most people wouldn't get past twenty noes, much less a hundred or a thousand! Yet this is sometimes what it takes to succeed.

If you look at any of the most successful people in history, you will find this common thread: They would not be denied. They would not accept no. They would not allow anything to stop them from making their vision, their goal, a reality. Did you know that Walt Disney was turned down 302 times before he got financing for his dream of creating "The Happiest Place on Earth"? All the banks thought he was crazy. He wasn't crazy; he was a visionary and, more important, he was committed to making that vision a reality. Today, millions of people have shared in "the joy of Disney," a world like no other, a world launched by the decision of one man.

When I lived in my crummy little apartment, washing my dishes in the bathtub, I had to keep reminding myself of these kinds of stories. I had to keep reminding myself that NO PROBLEM IS PERMANENT. NO PROBLEM AFFECTS MY ENTIRE LIFE. THIS TOO SHALL PASS IF I CONTINUE TO TAKE MASSIVE, POSITIVE, CONSTRUCTIVE ACTION. I kept thinking, "Even though my life looks terrible right now, there are many things to be thankful for, like the two friends I have, or the fact that I have all my senses, or that I can breathe fresh air." I constantly reminded myself to focus on what I wanted, to focus on solutions instead of problems. And I remembered that no problem affects my entire life, even though it may look like it right now.

So I decided I would no longer believe that my whole life was screwed up simply because I had financial difficulties or emotional frustrations. I decided that there was nothing wrong with me, but that I was simply in "lag time." In other words, I knew that if I were to continue nurturing the seeds I had planted -- continue doing the right things -- I would make it out of this winter of my life and into spring, when I would reap the rewards of years of seemingly fruitless efforts. I also decided that doing exactly the same things over and over again and expecting a different result was insane. I had to try something new, and I had to keep on until I found the answers I needed.

My message to you is simple, and in your heart you know it's true: Massive, consistent action with pure persistence and a sense of flexibility in pursuing your goals will ultimately give you what you want, but you must abandon any sense that there is no solution. You must focus immediately on the actions you can take today, even if they are small ones.

This makes sense, doesn't it? So why don't more people follow the advice of the Nike ad and just do it? The answer is that they've been shut down by fear of failure. But I've discovered something wonderful about failure....

Tony Robbins is a bestselling author, entrepreneur, and philanthropist. For more than thirty-seven years, millions of people have enjoyed the warmth, humor, and the transformational power of Mr. Robbins’s business and personal development events. He is one of the nation’s top life and business strategists. He’s called upon to consult and coach with some of the world’s finest athletes, entertainers, Fortune 500 CEOs, and presidents. Robbins is a founder or partner in over a dozen companies in industries as diverse as a five-star Fijian island resort to custom 3D printed Prosthetic limbs. Through the Tony Robbins foundation and his matching funds, Tony has provided over 400 million meals in his partnership with Feeding America. He lives in Palm Beach, Florida.

“More than a note from a friend -- an indispensable guide! ” –Arnold Schwarzenegger

“Vintage Tony Robbins . . . It distills the complexity of the human potential movement into one single but powerful idea.” –James Redfield, author of The Celestine Prophecy

“Tony’s warmth, passion, and commitment will inspire you to truly master your life and touch others in the process.” –Kenneth Blanchard, Ph.D., co-author of The One-Minute Manager

Notes from a Friend

A Quick and Simple Guide to Taking Control of Your Life

By Tony Robbins
LIST PRICE $16.00
PRICE MAY VARY BY RETAILER