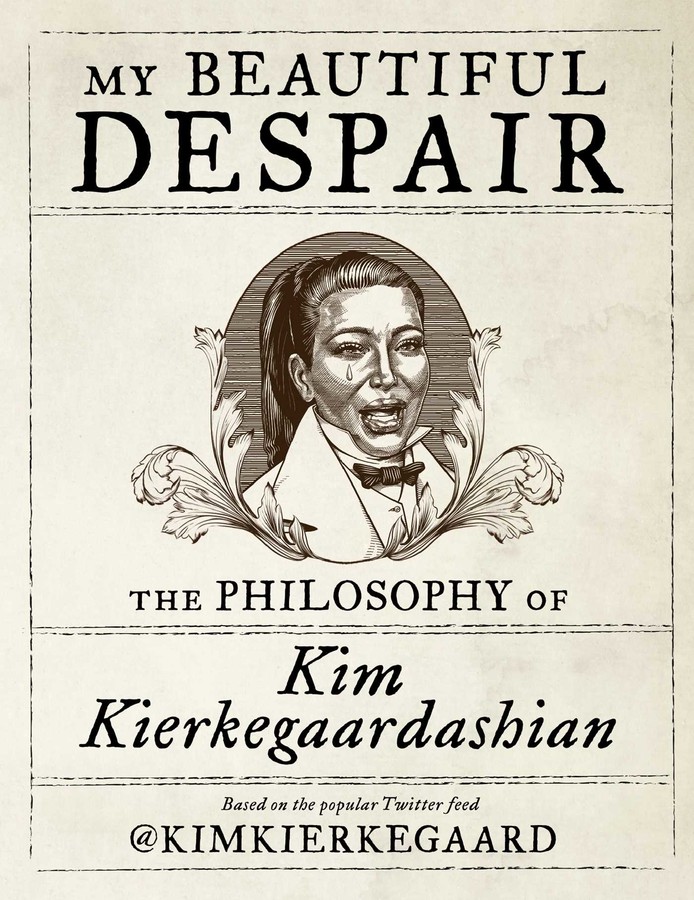 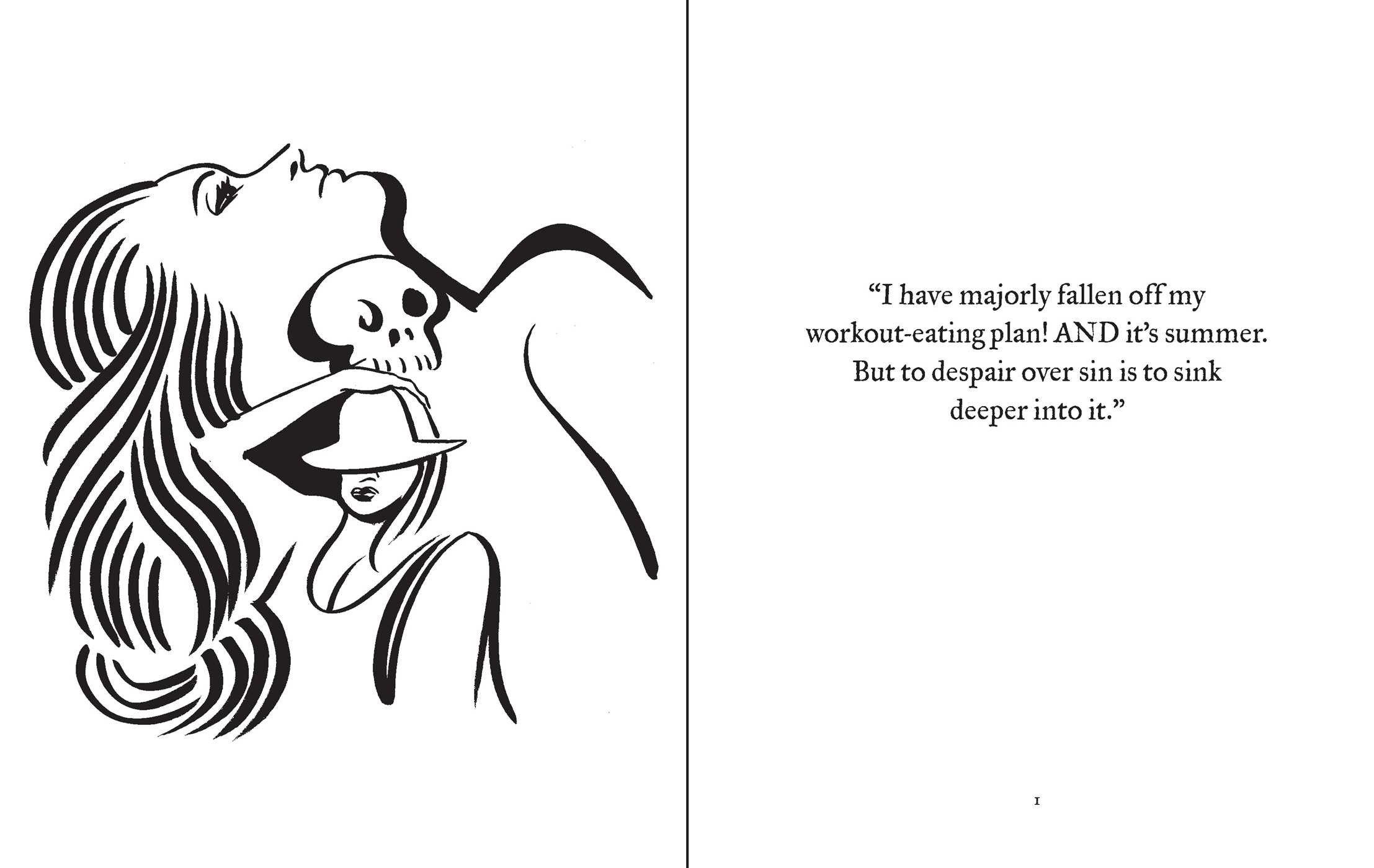 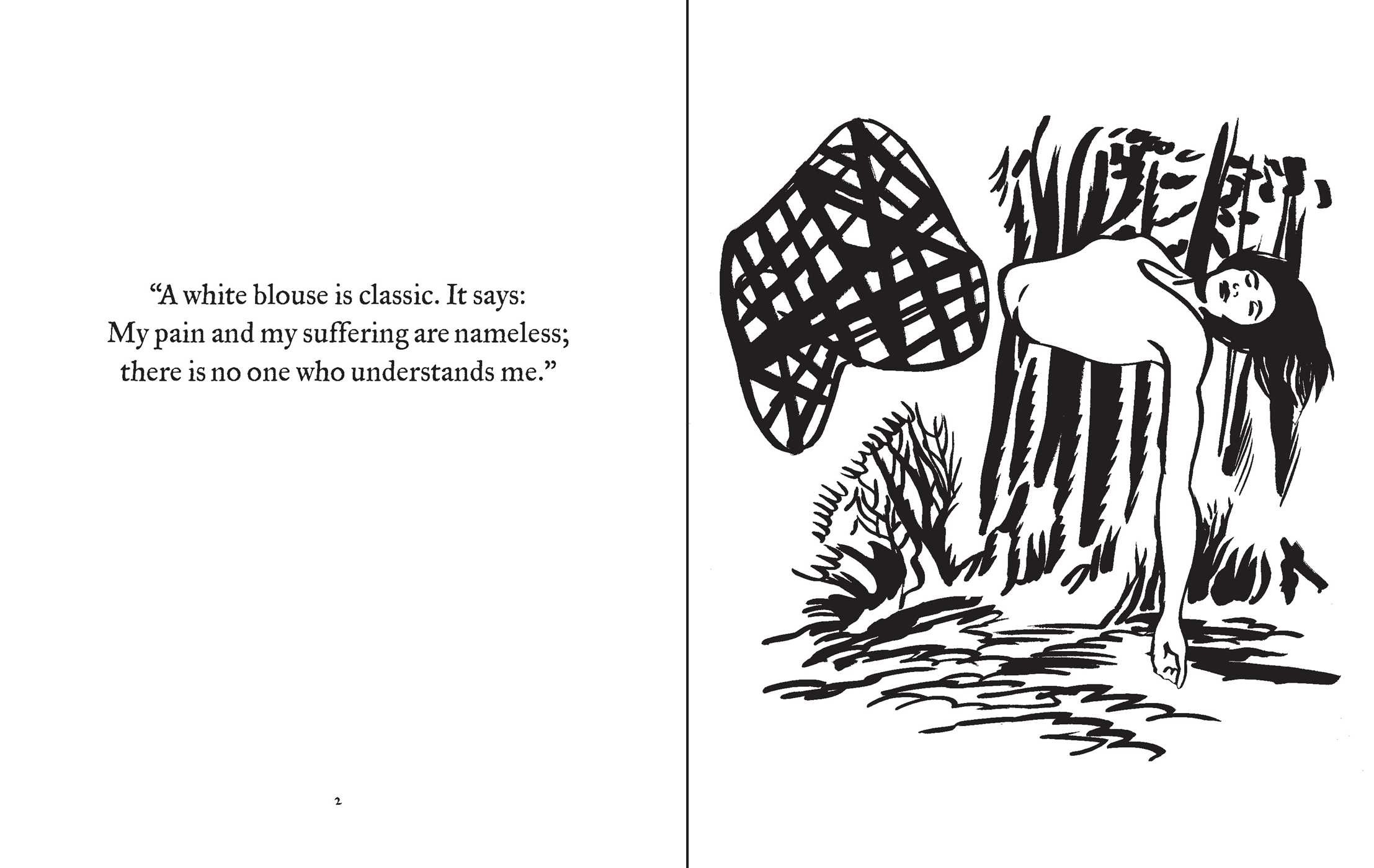 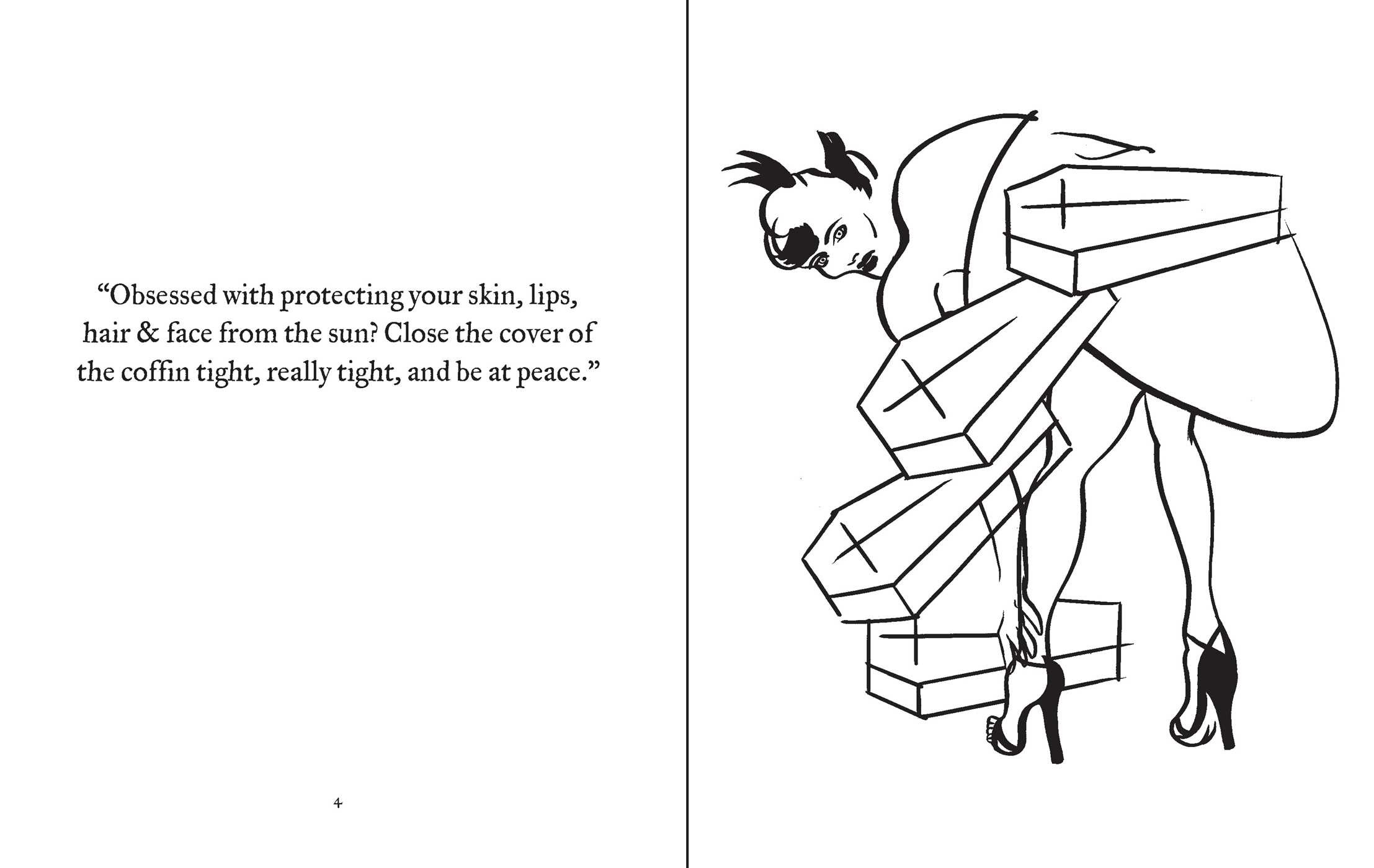 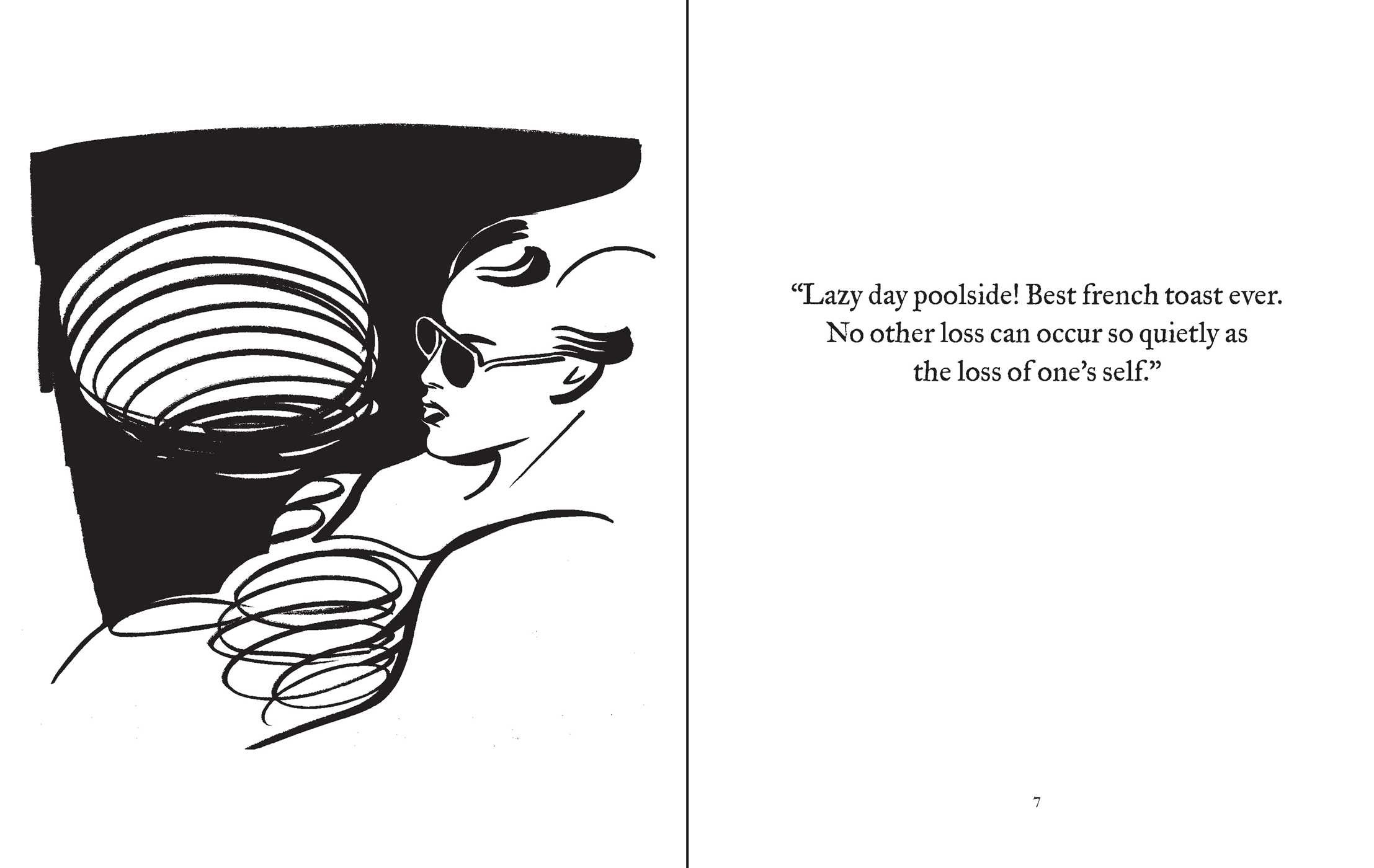 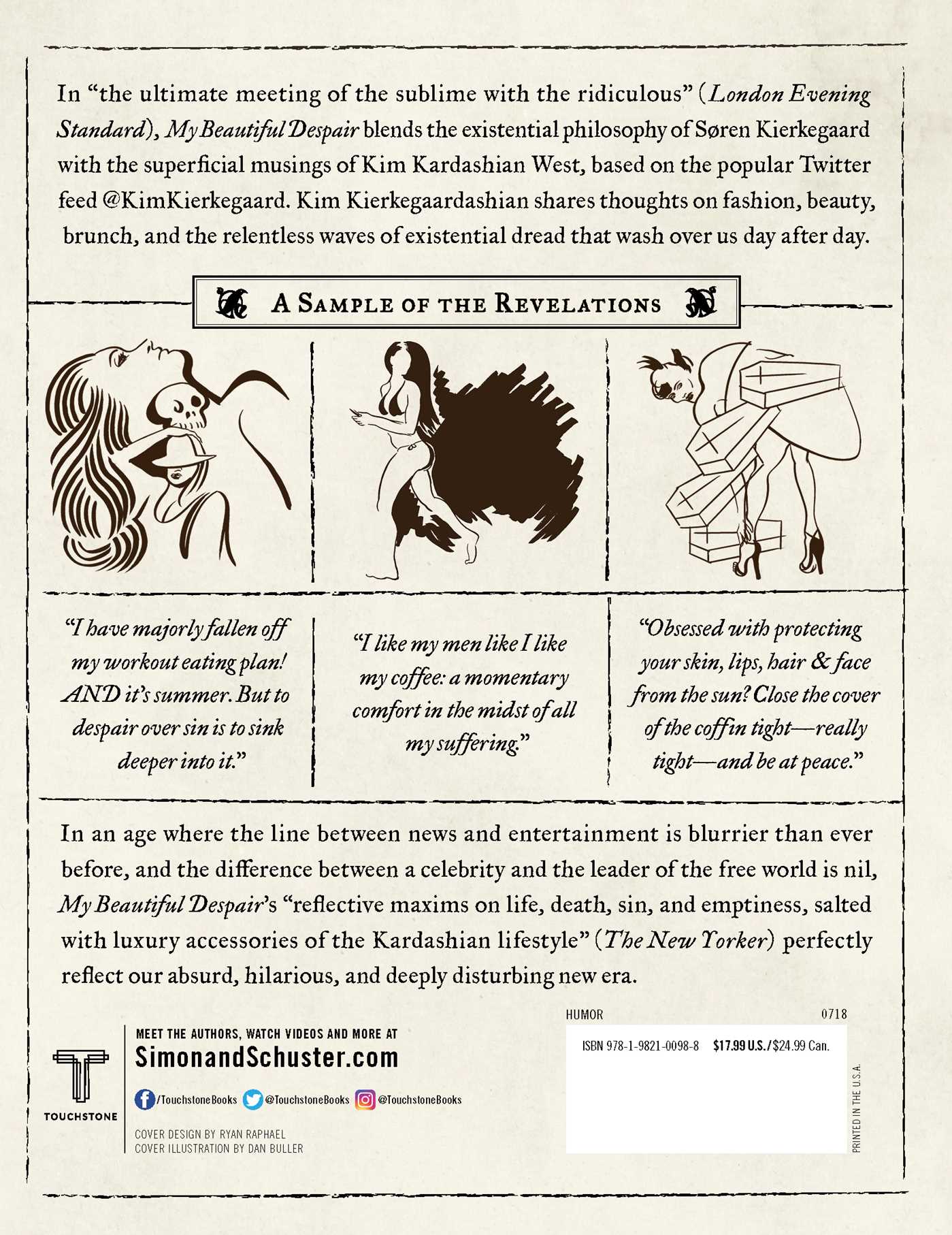 “Reflective maxims on life, death, sin, and emptiness, salted with luxury accessories of the Kardashian lifestyle...@KimKierkegaard is dross turned gold, redemption through absurdity in a hundred and forty characters.” –The New Yorker

In “the ultimate meeting of the sublime with the ridiculous” (London Evening Standard) My Beautiful Despair blends the existential philosophy of Søren Kierkegaard with the superficial musings of Kim Kardashian West, based on the popular Twitter feed @KimKierkegaard. Kierkegaardashian shares thoughts on fashion, beauty, brunch, and the relentless waves of existential dread that wash over us day after day.

A sample of the revelations include:

– I have majorly fallen off my workout-eating plan! AND it's summer. But to despair over sin is to sink deeper into it.
– Obsessed with protecting your skin, lips, hair & face from the sun? Close the cover of the coffin tight, really tight, and be at peace.
– I like my men like I like my coffee: a momentary comfort in the midst of all my suffering.
– What is the operation by which a self relates itself to its own self, transparently? Selfie.
– What if everything in life were a misunderstanding, what if laughter were really tears? Scared LOL!!
– I’ve been going to bed a little bit earlier each night, to get a taste of death.

In an age where the line between news and entertainment is blurrier than ever before, and the difference between a celebrity and the leader of the free world is nil, Kierkegaardashian’s insights perfectly reflect our absurd, hilarious, and deeply disturbing new era.

@KimKierkegaard has been admired, praised, and adored in The New Yorker, The Washington Post, The New York Times, Financial Times, The Economist, New York, Buzzfeed, and more, and has amassed nearly a quarter of a million Twitter followers, including J.K. Rowling and Anna Kendrick. Now in a humorous, illustrated gift book, perfectly suited for our existential times, Kierkegaardashian’s philosophical insights are juxtaposed for the first time with Dash Shaw’s brilliant black-and-white illustrations.

“Reflective maxims on life, death, sin, and emptiness, salted with luxury accessories of the Kardashian lifestyle . . .  @KimKierkegaard is dross turned gold, redemption through absurdity in a hundred and forty characters.”
—The New Yorker

“Basically what you have is profound ideas that exercise your brain, combined with mindless comments that lower your IQ. Put the two together and they cancel each other out, allowing your mind to do exactly nothing . . . it’s pretty entertaining.”
—Washington Post

“Will restore your faith in celebrity, philosophy, life itself.”
—Miami New Times

“The amusing Kim Kierkegaardashian mashes up the anguished writings of Søren Kierkegaard with the daffy public statements of Kim Kardashian . . . The joke is in the knowing collision of antique and contemporary, high and low culture.”
—New York Times

“Perhaps the ultimate meeting of the sublime with the ridiculous.”
—London Evening Standard

"When you combine the inanities of the US reality TV star with the existentialism of Denmark’s foremost philosopher, this is what you get.”
—Financial Times

“Kim Kierkegaardashian is Twitter at its wittiest, a marriage between an icon of contemporary American culture and the angst-ridden 19th century Danish father of existentialism.”
—Economist

"Much better than all the Kiergegaard stuff I’ve never read. Also there are pictures.”
—Gary Shteyngart, author of Super Sad True Love Story

"every bit as enlightening and hysterical as it sounds."
—San Francisco Chronicle