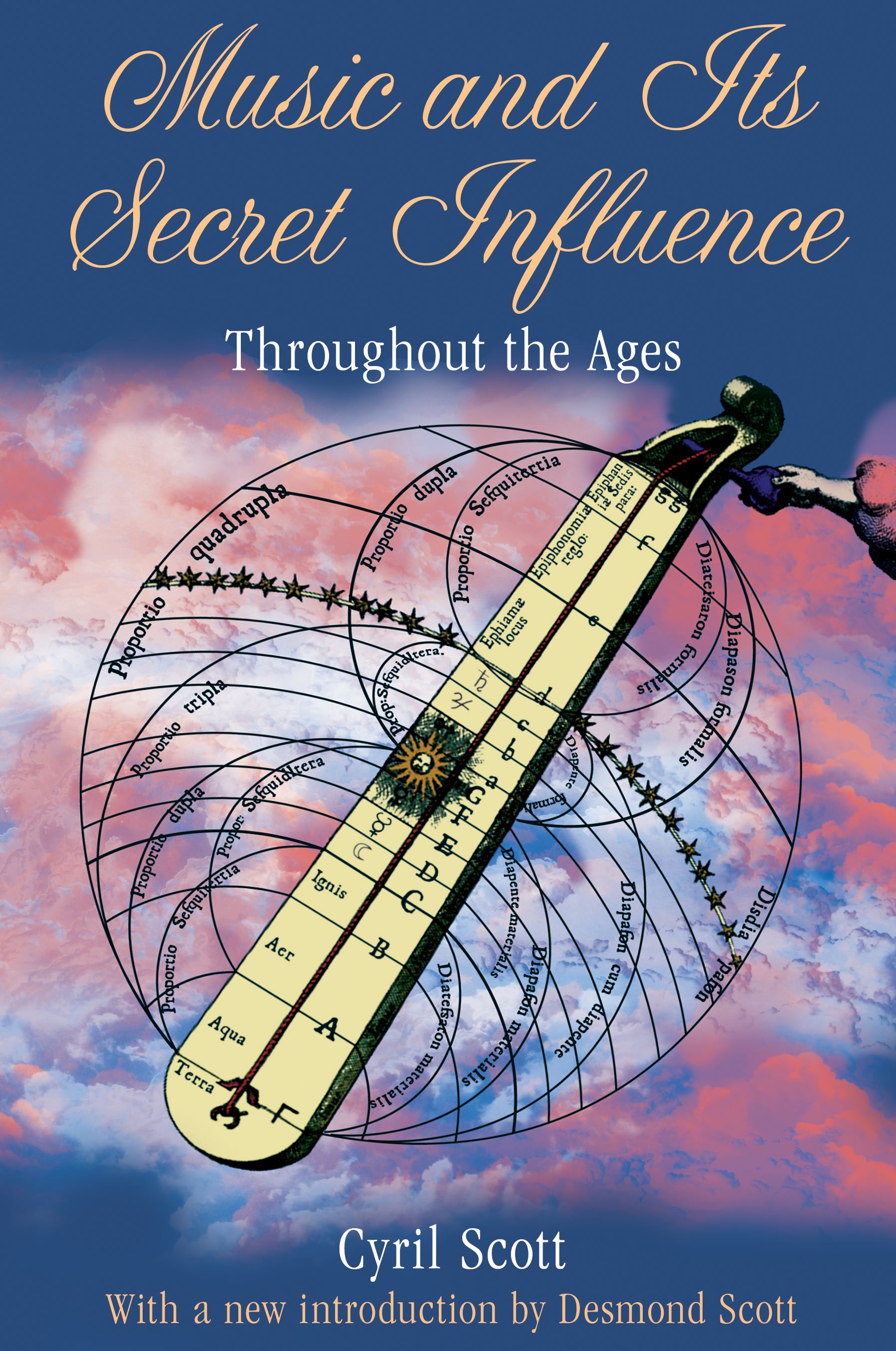 The role of music in the evolution of humanity

• Reveals how a hierarchy of initiates, evolved spiritual intelligences, and devas actively influenced the musical compositions of geniuses to transmit great truths through music

• Explores the influence of the classical composers Bach, Handel, Beethoven, Mendelssohn, Chopin, Schumann, Wagner, and Strauss--from Beethoven’s influence on the creation of psychoanalysis to Chopin’s musical influence on the emancipation of women

Composer and author Cyril Scott explores the role of music in the evolution of humanity and shows how it has pushed human evolution forward. He explains that music has a profound effect on history, morals, and culture and is a more potent force in the molding of character than religious creeds or moral philosophies. Whereas mediocre musicians reflect only their own times, inspired ones help determine the character of the future.

Exploring the works of classical composers such as Bach, Handel, Beethoven, Mendelssohn, Schumann, Chopin, Wagner, and Strauss, Scott reveals how their compositions were actively influenced by a hierarchy of initiates, evolved spiritual intelligences, and devas to make the way fertile for human spiritual evolution. Scott explains how humans are composed not only of a physical body, emotional body, and a mental body but also a sensation body that acts as the bridge between the physical realm and the hierarchy of initiates. Scott shows how the music of great composers affects not only those listening but also society as a whole--from Beethoven’s influence on the creation of psychoanalysis to Chopin’s musical influence on the emancipation of women.

Chapter 26
The Beginnings of Music and Religion

Whereas Melody is the cry of Man to God, Harmony is the answer of God to Man.

It requires but little imagination to realize that in primitive Man there must have been desires and yearnings, which he could not understand, still less put into words, however much he may have tried. Mere speech was a totally inadequate means of expression; he needed something more forceful, yet less definite; and he ultimately found it in a rudimentary form of song. He discovered that when he sang, his petitions in some unaccountable way seemed to have been heard, and so his yearnings were stilled; he obtained an emotional relief, as a distraught woman obtains relief when she prays to the god of her own religion. It may seem extravagant to say that through music the first concept of God was aroused in the human mind, yet when primitive Man deemed his prayers were heard, he naturally came to conceive of a Being higher than himself--a being who could watch over him with parental care. Hitherto his conceptions had been entirely phallic; he had regarded “the portal through which a child enters the world as the actual Giver of life”; but after he had discovered song, he conceived the idea of the great Mother, the very first deity to whom he turned for consolation and protection from the evils of the precarious existence.

The next stage in the evolution of religion is common knowledge; when once this idea of the great Mother had been formulated, Man fashioned her image in wood or stone and carved figures of her in caves, for he felt the need of a concrete object toward which to direct his worship. Finally, having fashioned his idols, he appointed someone to guard them and minister to their supposed needs; and in this manner the office of priest originated. It was the priests who by degrees improved the primitive type of song and transformed it into a species of chanted spell. These spells were committed to memory and handed down from generation to generation. Only much later were they notated. One of their effects was to increase religious fervor, with the result that men began to sway with their bodies, to dance and clap their hands. In the course of time the most elementary form of drum was invented to accentuate the rhythm. This lead to the invention of other instruments and so to the actual birth of music as an art.

We see, then, that from the very beginning, music was associated with religion, and that the priests played an important part in its systemization and development. Indeed, according to the Akashic Records, the first priest who was selfless enough pure-heartedly to serve humanity was enabled to hear music of the higher spheres; and to him it was given to know that whereas “Melody is the cry of Man to God, Harmony is the answer of God to Man.” But although, needless to say, he was unable to translate what he heard into earthly sounds--the means being lacking--it inspired him with the idea of introducing a greater variety into the existing musical phrases, so from that time onward, music very gradually became more diversified.

The priests, having discovered the potency of the above-mentioned mantras or spells and realizing that if certain notes were reiterated definite results could be obtained and definite powers brought into action, used this particular form of magic--for magic it was--for noble and constructive ends during the earlier periods of Atlantean history. Under the influence of Initiates, sound was employed to build beautiful and wonder-inspiring forms; but in the later phases of that mighty civilization it came to be employed entirely as a force for destruction. Discordant sounds were deliberately used to shatter and disintegrate. As every occultist knows, the practice of magic for evil ends was responsible for the downfall of the continent, and thus perished not only that dark phase of its music but also the scientific knowledge of the application and potency of Sound, which had wrought such havoc. Wherever some particular power or aspect of knowledge has become vitiated by abuse, it has been permitted by the Higher Ones to fall for the time being into obscurity, to re-emerge again eons later, perhaps as a purified overtone of itself.

Among the first composers to be instrumental in introducing this overtone of the ancient Atlantean music was Debussy. In more occult terms he was unconsciously used by the Higher Ones to carry over Fourth Race sound-vibrations into the Fifth. To this end he made a study of and absorbed the characteristics of Javanese music, which is a remnant, though mellowed and modified, of the Atlantean, and which, I should add, exercises a powerful influence through the astral on the physical body, especially on the solar plexus. An obvious example of this Fourth Race music mingling with that of the Fifth is shown in his Fetes in which ancient chants actually associated with the temples of the past subtly mingle with a wholly modern and irresponsible element.

Debussy was succeeded by composers unconsciously expressing the harsher and more destructive elements of the Atlantean music, albeit at a higher point of the evolutionary spiral, since, as I elaborated in chapter 22, this destructive force is used to disintegrate obsolete and baneful thought-forms of various kinds.
Cyril Scott

Cyril Scott (1879-1970) was an English composer, writer, and poet. The youngest student of his time accepted to The Hoch Conservatorium in Frankfurt, Germany, Scott was hailed at the beginning of the 20th century as the father of modern British music. He wrote several other books, including An Outline of Modern Occultism, The Great Awareness, and The Initiate trilogy.

“[Music and Its Secret Influence] provides a fine history of classical music’s evolution, the effects of specific composers on music in society, and how music holds suggestive qualities for intuitive thinking. The result is an outstanding survey linking spirituality, culture, and music history in a strong pick for any music or new age library.”

“Composer and author Cyril Scott explores the role of music in the evolution of humanity and shows how it has pushed human evolution forward. He explains that music has a profound effect on history, morals, and culture and is a more potent force in the molding of character than religious creeds or moral philosophies.”

“What may, at first, seem to be an insurmountable undertaking is actually an easy to read, intriguing adventure of music and spirituality, all the more important due to its historic importance as a piece of social commentary on early 1930s Britain and Europe.”

“Scott predicts the music of the future and how people will understand the relationship between color, sound, healing and the deva world. This book will likely appeal to anyone interested in the inner essence of music and its impact in our lives.”