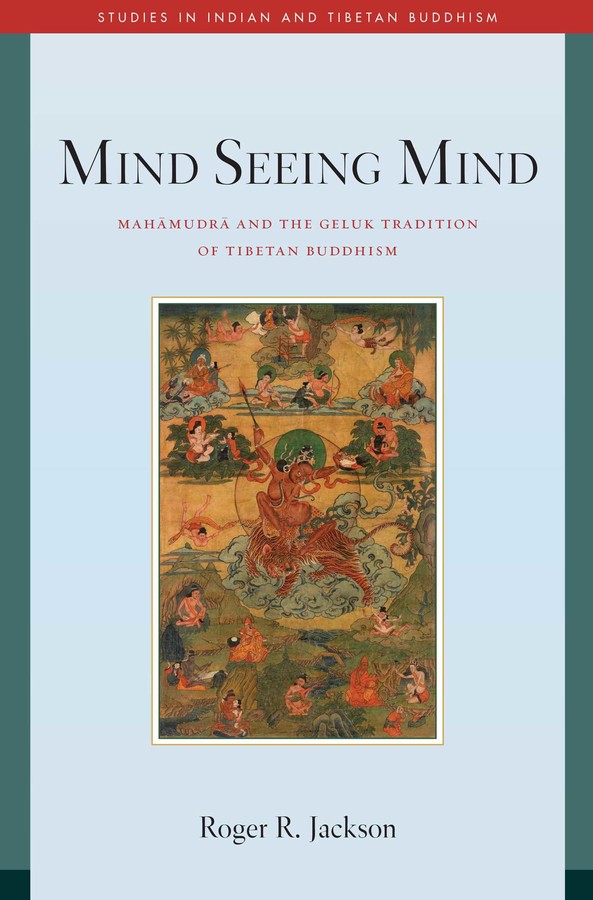 A definitive study of one of the most important practices in Tibetan Buddhism, with translations of a number of its key texts.

Mahamudra, the “great seal,” refers to the ultimate nature of mind and reality, to a meditative practice for realizing that ultimate reality, and to the final fruition of buddhahood. It is especially prominent in the Kagyü tradition of Tibetan Buddhism, so it sometimes comes as a surprise that mahamudra has played an important role in the Geluk school, where it is part of a special transmission received in a vision by the tradition’s founder, Tsongkhapa. Mahamudra is a significant component of Geluk ritual and meditative life, widely studied and taught by contemporary masters such as the Dalai Lama.
Roger Jackson’s Mind Seeing Mind offers us both a definitive scholarly study of the history, texts, and doctrines of Geluk mahamudra and masterful translations of its seminal texts. It provides a skillful survey of the Indian sources of the teaching, illuminates the place of mahamudra among Tibetan Buddhist schools, and details the history and major textual sources of Geluk mahamudra. Jackson also addresses critical questions, such as the relation between Geluk and Kagyü mahamudra, and places mahamudra in the context of contemporary religious studies. The translation portion of Mind Seeing Mind includes ten texts on mahamudra history, ritual, and practice. Among these are the First Panchen Lama’s root verses and autocommentary on mahamudra meditation, his ritual masterpiece Offering to the Guru, and a selection of his songs of spiritual experience.
Mind Seeing Mind adds considerably to our understanding of Tibetan Buddhist spirituality and shows how mahamudra came to be woven throughout the fabric of the Geluk tradition.

“Roger Jackson's Mind Seeing Mind: Mahamudra and the Geluk Tradition of Tibetan Buddhism is an outstanding achievement, vast in scope and profound in its engagement with Tibetan Buddhist contemplative and philosophical traditions. From the origins of the Mahamudra teaching in India, through its refinement and development among the Kagyü masters of Tibet, to its transmission to Jé Tsongkhapa and his Gelukpa successors down to the present day, Jackson guides the reader on a journey resembling the exploration of a great river from its turbulent headwaters to the spreading streams of its delta. Concluding with detailed consideration of contested questions about Mahamudra and a magnificent anthology of texts in translation, Mind Seeing Mind is a model study of the historical and doctrinal literature of Buddhism in Tibet.”

“A lifetime of study has gone into this immensely important volume, and it shows on every page. The best historical overview of mahamudra available in any language, Mind Seeing Mind is also the definitive study of the Great Seal in the Geluk tradition. Erudite, yet accessible, it is a book no serious student of Buddhism can afford to overlook.”

“The mahamudra tradition of the New translation schools of Tibetan Buddhism and the ‘cutting through’ teachings of the Dzokchen tradition of the Old translation school bear a great deal in common. Integrating the four noble truths of the first turning of the wheel of Dharma with the teachings on the objective clear light of emptiness in the second turning, and the subjective clear light of the buddha nature of the third turning, they represent the pinnacle of the science of mind in Indo-Tibetan Buddhism. Roger Jackson has done us a great service in translating core mahamudra texts from the Geluk tradition and contextualizing them within the broader framework of Tibetan Buddhism. This volume is worthy of close attention by contemplatives and scientists alike, for it is enormously relevant to understanding the mind in the modern world.”

“The meditation techniques of the Tibetan Mahamudra traditions that purport to provide direct access to the luminous and empty nature of mind in an uncontrived sphere beyond any reification played an important role in the intellectual history of Tibet. Even though it is mainly known as a specialty of the Kagyü school, it also found a place in other traditions such as the Nyingma, Kadam, Sakya, Shiché, Jonang, and Geluk. In Mind Seeing Mind Roger Jackson presents for the first time a comprehensive work on Geluk Mahamudra against its Indian and Tibetan background, investigating its history, doctrines, and practices from a critical scholarly standpoint. At the same time the work also contains multiple translations of Tibetan texts crucial to Geluk Mahamudra, which profit from Jackson’s intimate acquaintance with the tradition. With this rare combination of skills, Jackson renders an enormous service for scholars and practitioners alike. It is a must-read for anyone interested in Geluk Mahamudra.”