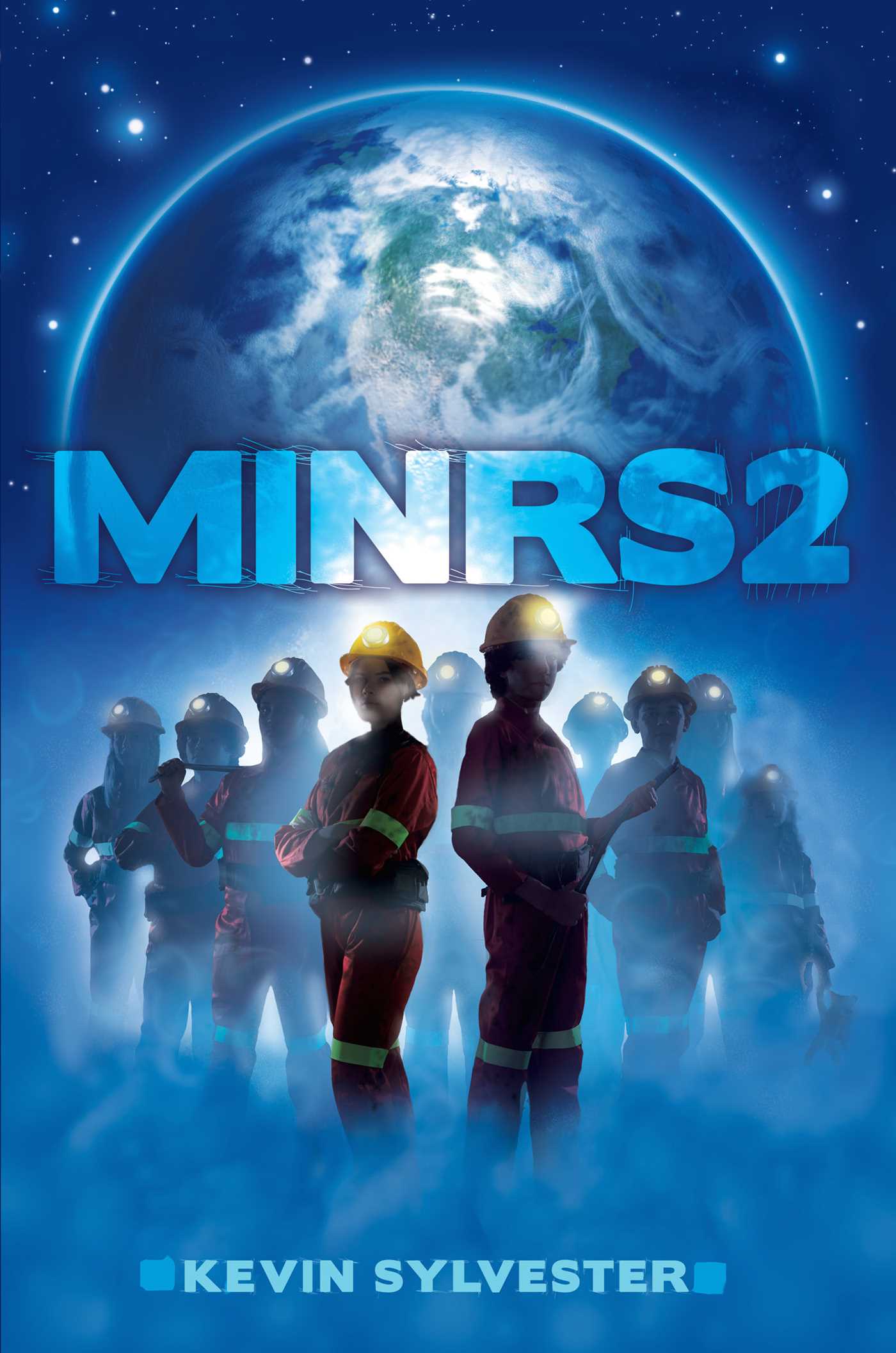 Book #2 of MiNRS
By Kevin Sylvester
LIST PRICE $17.99
PRICE MAY VARY BY RETAILER

Dive right back into the action on Perses in this thrilling sequel to the gritty, space adventure, MiNRS, which School Library Journal called “a solid survival story.”

They are coming to get you.
Hide.
Hide.

The children of Perses have been receiving this message on repeat from Earth for weeks. Christopher, Elena, and the other survivors of the attack on their space colony know two things: Their victory over the Landers will be short-lived and a new wave of attacks is imminent.

New Landers arrive sooner than expected. Led by the ruthless Kirk Thatcher, and armed with a new lethal kind of digger, they vow to hunt down and destroy everyone.

The kids have nowhere to go but underground. Again. But resources and patience are running low, and the struggle to keep everyone safe is complicated by all the infighting.

As Christopher bears the burden of leadership, he also has to decide whom he can trust. There are no easy answers. And with deadly consequences on the line, there is no room for mistakes.

I stabbed at the keyboard, using my remaining fingers, my left hand still not quite translating the commands my brain was sending.

The door to the radio room creaked.

“Christopher.” It was Elena Rosales, my best friend, and my second-in-command here on Perses. “It’s almost time to go.”

I began frantically hitting enter over and over to make the words disappear from the screen.

Elena walked up and leaned against the tabletop, her arms crossed, facing me. My fingers were still poised above the keyboard. The last few words remained on-screen. I gently rested my right hand on enter and pressed it slowly.

“What are you typing? Not something stupid, I hope.” She didn’t laugh.

I fidgeted in my chair. Was I doing something stupid? Sending personal thoughts and angsty questions out into space, not even knowing who, or what, was at the other end? Using our only line of communication to Earth as, what? A diary? I pressed down on the key again. More words disappeared.

“Pretty cool how Pavel set up a keyboard here on the base so we can just type in what we want to say,” Elena said.

“Yeah,” I said, pressing down a few more times.

“Better than tapping in the code like we had to when we found the beacon,” she added. “Who knew he was such a computer whiz?”

“His mom was in charge of the radio room, so I guess it makes sense.”

I glanced at the screen to make sure my words had finally disappeared. They had. I relaxed . . . a bit.

Elena stared at me, her eyes narrowing. “You’re embarrassed.”

My face flushed a little, but I smiled weakly and shrugged. That was why she hadn’t looked at the screen. She didn’t have to.

Elena had a way of seeing right through me. We’d grown up together here on Perses, but that didn’t explain how close we’d become, especially after the Blackout attack and the horrible weeks that followed. She’d made me promise never to shut her out, lie, or keep things from her. I was trying to keep that promise, but it was hard. What made it harder was that we didn’t always agree on what was best for our group.

“I was just sending some more stuff through the beacon, to Earth.”

“What stuff?” She stared at me even harder, if that were possible.

I sighed. “Questions. About why all this is happening. And . . . about our parents.”

Elena gave an almost imperceptible shudder. She didn’t speak, but I knew we were thinking the same thing. We missed them. More than we could express. Although I’d just been trying to express it, badly, when Elena had walked in.

“Hear anything back?” she asked quietly.

“Just the same message, on a loop.”

We both listened as the radio receiver alternated between silence and the repeated cycle of beeps and dashes. The screen now flashed the translation. They are coming to get you. Hide. Hide. Hide.

It was always the same.

“It has to be automated,” Elena said. “Some computer- generated response to our distress call.”

“When my dad told me about the beacon, he said there were people on Earth who were watching, listening for any sign of trouble. He specifically said people.”

Elena didn’t argue. Those were some of the last words my father had spoken before he’d sent me to hide in the mines underneath the planetoid’s surface. I remembered them exactly.

There are people on Earth who are watching for any sign of trouble. You’ll need to survive the Blackout and signal them for help.

We’d been throwing questions back to Earth for days.

Who is coming to get us?

Do they know we are here?

What can we do?

All we’d received was the same warning message. I wasn’t sure why I’d suddenly decided to type in my own personal thoughts and fears. Maybe I was hoping . . . I have no idea what I was hoping. Part of me just wanted to tell someone how I felt, someone who I wasn’t responsible for keeping alive. And maybe a living person would respond with something more than a warning. I knew my parents would have offered words of encouragement, maybe even helped me understand why the attacks had happened and what to do now. But they were dead.

“We should turn it off,” Elena said. “Pavel and Fatima are coming to pack up the equipment for our bugout.”

“Military lingo for ‘getting the heck out of here before we get attacked.’ ”

“Darcy loves it. She pretends she’s some kind of demented grasshopper, hopping around, growling.” Elena laughed. I did too. Darcy was the youngest member of our group—I’d named us the MiNRS—the only survivors of our mining colony. Barely five, she’d seen way too much for such a little kid. She would go quiet sometimes. That worried me. Darcy was special to me. I would be dead if it weren’t for her. It was her cry for help that had kept me from going back to the surface during the attacks. But it was more than that. I felt more . . . protective, maybe, about her. She needed me.

I hoped we’d get through this new threat, whatever it was, and she’d come out the other side, safe, and smiling more.

I tried to get up, but my cracked ribs and cut-up legs screamed in protest, and I had to grip the arms of the chair for support. Elena made a move toward me, but I shook my head.

“I’m fine,” I said through gritted teeth. “So, where are Pavel and Fatima now?”

“At the transmitter site for the beacon, trying to figure out a way to take it with us when we’re on the move.”

“I thought you said the thing was huge?” I still hadn’t seen the actual beacon. I’d been recovering in bed ever since it was found buried nearby—about halfway between the mission’s home base, where we were now, and the colony and mines where we worked and lived. Pavel had synched the radio receiver with the transmitter, but the beacon itself was miles away.

“The whole thing is, but Pavel has a theory.”

Elena rolled her eyes. “It’s a good one this time. Pavel says the big metal rings on the beacon act as a kind of antenna. Then there’s the actual transmitting part, which is smaller. He thinks it’s inside. So he’s trying to get that out without breaking it. He thinks they’ll still be able to talk to each other even if they’re split up.”

“He’s a pain, but he’s also a whiz, so let’s hope he’s right.” I succeeded in standing up, my knees making an audible crack as I straightened my legs. “Thanks for handling all that.”

“No problem, Fearless Leader.” She saluted me.

I didn’t salute back. Elena’s attempts to treat us like some kind of kid army made me uncomfortable. Yes, we’d fought back against the Landers, but only when we’d had no choice. I still hoped there was a way to stay alive and get safely back to Earth without any more death on either side.

The receiver had gone silent again.

I reached for the power button, but I paused, hoping for some alteration in the message.

My dad had told me the beacon was a way to signal Earth in case something went wrong with the Great Mission, Melming Mining Corporation’s plan to set up the colony on Perses.

Something had gone terribly wrong. During a two-month communications blackout between Perses and Earth, we’d been attacked. We called them Landers, although we still weren’t sure who they were. They killed our parents and tried to kill us. We’d hidden and survived—or most of us had. Two had died as heroes. One had died as a traitor. I still couldn’t shake the feeling that their deaths had all been my fault.

We’d finally been forced to attack the Landers, destroying their ship as they tried to escape with the priceless ore from the planet. Alek sacrificed himself in the attack. I’d lost most of the middle two fingers on my left hand.

The beacon began transmitting again, but it was the same exact sequence of sounds, dashes, and dots I’d come to know by heart. The screen flashed the translation.

They are coming to get you.

I flicked off the switch.

“Let’s get everyone moving.” I shuffled away from the desk.

“Let’s start with you,” Elena said, grabbing my arm and helping me steady myself. The room spun a bit as I found my balance. I tried to focus my eyes on something big and stationary, but the entire radio room had been stripped bare, every element tucked away into the back of our diggers. We’d also raided the hospital, the food storage silo, and the sleeping quarters.

We’d been using the old home base as our camp. The core-scraper where we’d all grown up and lived had been destroyed in the attacks. There wasn’t much left here after the Landers’ ship exploded, either, but there was some shelter, food, and the radio room.

“I’m good,” I said. The walls finally settled, and the pain in my leg subsided.

Elena kept her hand on my arm. I felt her give a gentle squeeze. “We do need to hurry. Don’t want to be late for our date.”

Elena nodded and leaned in close to my ear. “It’s going to be a real blast.”

“It usually is with you,” I joked.

Elena winked. “But first we gotta face the troops.”

Book #2 of MiNRS
By Kevin Sylvester
LIST PRICE $17.99
PRICE MAY VARY BY RETAILER

More books in this series: MiNRS