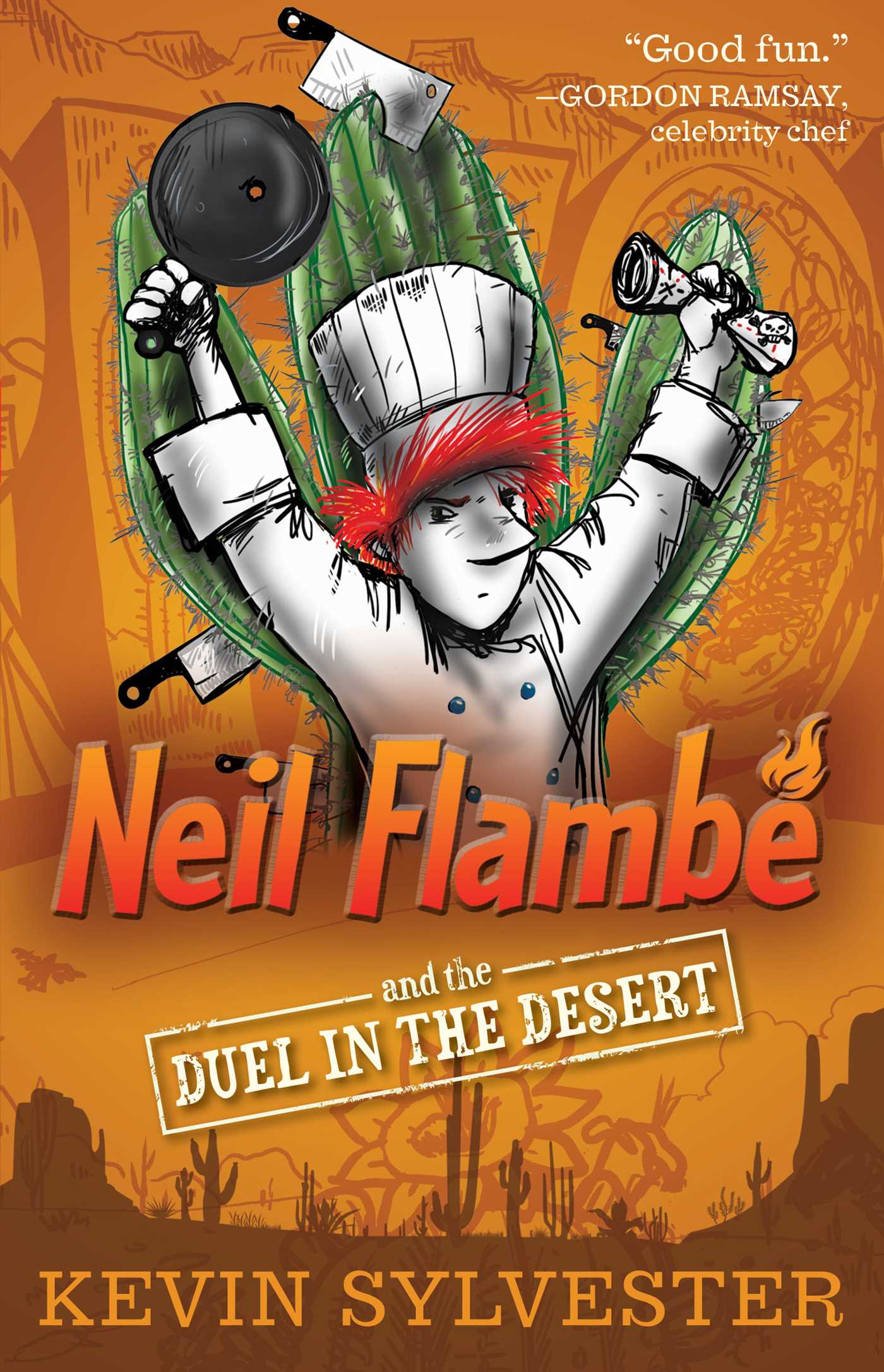 Neil Flambé and the Duel in the Desert

Neil has lost his beloved restaurant. Though he misses it dearly, he and his friend Larry are headed on a new adventure. They are travelling to the Salsa Verde ranch in Arizona with their new food truck to participate in the legendary food truck gathering, the Broiling Man Festival. Once he arrives, Neil discovers that the Verde ranch is in danger of foreclosure, at the mercy of a developer who wants to turn it into housing and a factory farm. The only hope for the ranch is a treasure map left behind by the very first Verde, a chef who discovered a mine while escaping from a murderous army colonel. Neil and Larry are on a quest to find the treasure, but each time they think they’re close to finding something, they come up with nothing. Will the boys find the mine—and the treasure—in time to save Salsa Verde ranch?

Neil Flambé and the Duel in the Desert CHAPTER ONE BORDER CROSS
Neil could see the look of shock on the border guard’s face before they reached the inspection booth.

“This is not going to go well,” Neil muttered. Larry slammed on the brakes, which let out an earsplitting squeal with a side order of blue smoke and a soupçon of burning rubber. Neil’s head whipped forward, then snapped back.

Neil caught a glimpse of the guard through Larry’s window. She had her eyes closed and her hands clapped tightly over her ears. She was frowning.

Larry turned off the ignition, let out a giant “WHOOP!” and began playing an imaginary drum solo on the steering wheel.

The guard coughed and waved the smoke away. She leaned out of her kiosk, taking in the length and height of the strange vehicle that had just appeared in front of her.

She gave her head a bewildered shake.

Larry smiled and winked at Neil. “I think she’s impressed with the FrankenWagon.”

The FrankenWagon was the new Flambé food truck, and Neil hated it. It was a hybrid in the same way chicken-chocolate ice cream is a hybrid. It was welded together from an old Volkswagen van at the front and a silver Airstream trailer at the back. There was a visible welding line that ran around the entire cab, like a scar, and Neil was sure it was going to split apart every time they turned a corner.

The guard narrowed her eyes and growled.

“I don’t think ‘impressed’ is the right word,” Neil said, secretly wishing that border guards had their kiosks on the passenger side.

“Open the window!” the woman bellowed.

Larry smiled and pointed his finger in the air in the universal sign for wait a second.

Larry nodded. Neil watched as Larry used an electric mixer to quickly roll down the window. He’d had to lean down to plug the mixer into the makeshift socket he’d installed in the dashboard, and it looked very suspicious, Neil realized, like maybe Larry was hiding something quickly at his feet.

The window lowered slowly, slowly, and Neil was sure he saw the guard reach for her weapon.

“Where are your hands?” the guard demanded.

“Pretty sweet, eh?” he said. “I made that myself after the original handle broke off.”

She frowned. A bead of sweat ran down Neil’s forehead.

Larry leaned on the door frame. “No worries. My cousin will just fetch them from yonder glove compartment. Speaking of fetching . . . may I get a name to put to the lovely face and oh-so-fetching uniform?”

The guard stayed stone-faced. Neil had seen Larry’s charm work on all sorts of people, but the border guard seemed immune.

Neil grabbed the passports and leaned past Larry to hand them to the woman.

She snatched them from his hands.

She ignored him and stared at the passport photos.

“Where are you heading?” she said, gliding the passports under some kind of scanner. Larry’s passport set off a series of beeps, and the guard’s eyes grew wide as she gazed at her computer screen.

“Arizona!” Neil yelled, squeezing his head through Larry’s window. “We’re heading down to Arizona for a couple of weeks for a food convention.”

“The Broiling Man Festival. Heard of it?” Larry said, smiling.

“In this?” She snorted, her professional demeanor momentarily broken by disbelief. “Good luck.”

She went back to staring at her beeping computer screen.

Neil wanted to slide down his seat and disappear through the floor of the FrankenWagon. Something, he thought sadly, that was probably all too possible. Larry had already warned him against moving the foot carpets.

The guard asked if the FrankenWagon was legal. Larry responded with a thumbs-up. “Legal and awesome!” Neil banged his forehead on the dashboard.

Neil quickly grabbed the permits and registration for the vehicle from the glove compartment and lunged past Larry, who was still trying to make googly eyes at the guard.

She asked if they had a visa to work in the States, since this was “allegedly a food truck.”

“Is it really work when cooking is your passion?” Larry said, leaning his head further out the window.

Neil scrambled to pass over the official invitation to the festival.

All this time, the computer continued to beep.

Larry began to sing the song “Home on the Range” to the beat, doing strange robot motions with his arms.

DoloroLynPetunia had had enough. She handed them back the passports and ordered them to go to a large building to their left.

“Did we win something?” Larry asked.

Neil smacked his face into his palm.

“Is that where we claim the prize?” Larry beamed, turning the key and firing up the FrankenWagon.

DoloroLynPetunia responded with one more emphatic point of her finger toward the building. “Secondary inspection. Now.”

If they were lucky, they’d only be trapped at the border for a few hours.

If they were unlucky, they’d be sent packing back home and told not to come back, possibly forever.

Neil lowered his head into his hands and moaned.

“Oh, give me a home where the cantaloupes roam!” Larry sang as he happily steered the truck toward the secondary inspection building.

Maybe if Neil could talk to the officer first, if he could explain that Larry was odd, but safe. He put his hand on the door handle and prepared to leap out as soon as they parked.

A large man pointed to a parking space in front of the building and then held up his hand in a stop sign as Larry flew into the spot.

Neil was out in a flash and ran to the front of the truck first. He realized immediately that rushing a border officer, even with the best of intentions, was not a good idea.

The officer reached for his gun and yelled, “HALT!”

Neil screeched to a stop. The officer looked Neil up and down and frowned.

Neil was wearing his chef’s outfit. It had been the only clean thing in his room when they’d left that morning.

Neil heard a click as Larry opened his door and stepped out. Neil winced.

A flippered foot gingerly felt for the ground.

Something resembling a shaggy blond dog had stepped out of the driver’s-side door. It was wearing scuba gear.

The guard glanced back and forth from the redhead in the chef outfit to the goofball in scuba gear and controlled his jaw muscles enough to utter one word.

Praise for Neil Flambé and the Bard's Banquet
“The constant suspense, innocent romance, a lovely recipe for scones, and the flamboyant, irrepressible chef will captivate fans of the series and impel new readers to the nearest bookstore or library.”

Neil Flambé and the Duel in the Desert