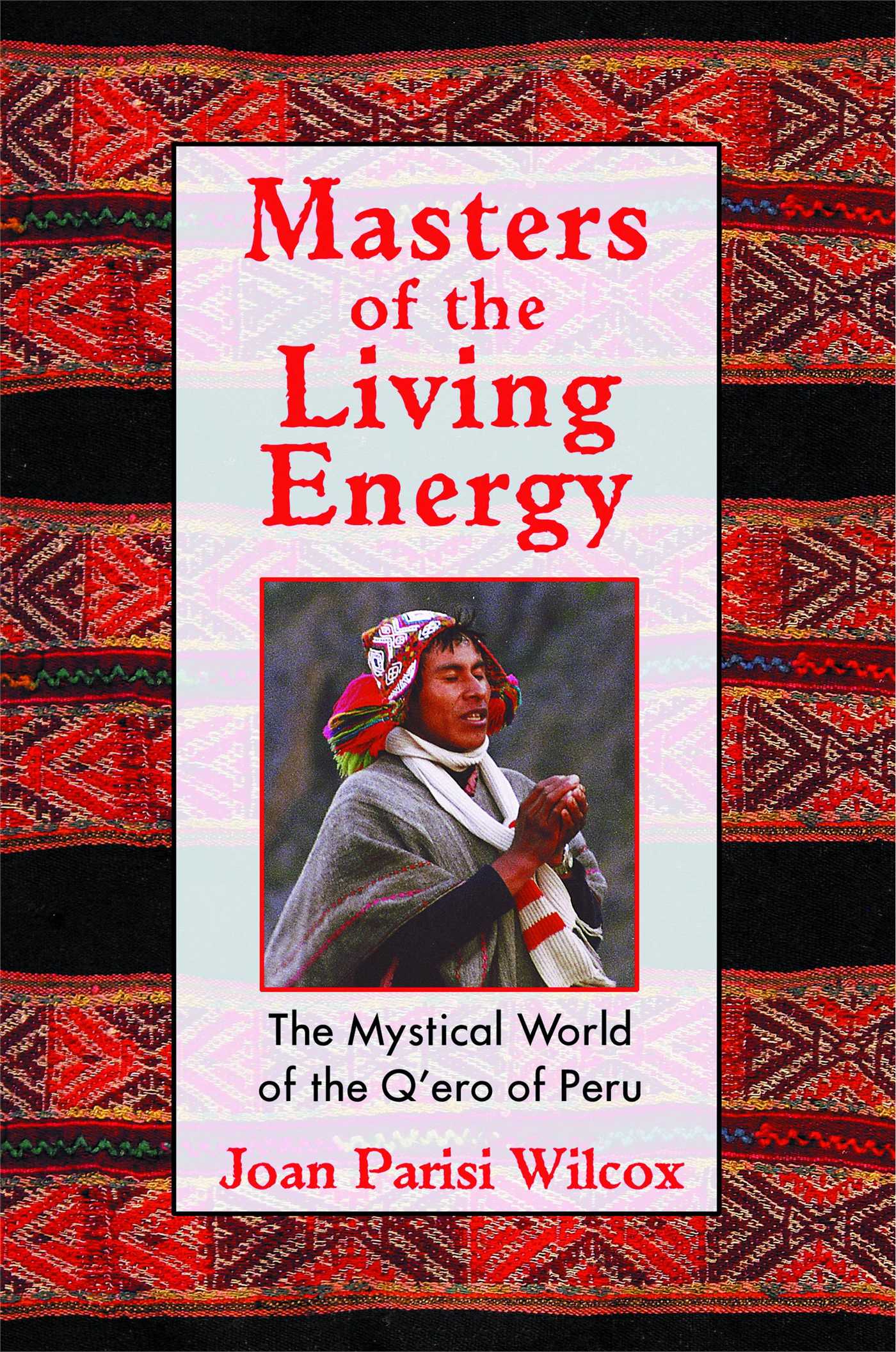 • Explores the energetics, spirits, tools, and practices of Andean mysticism--the real story behind the fictionalized accounts in The Celestine Prophecy

Known as the “keepers of the ancient knowledge,” the Q’ero Indians of Peru are the most respected mystics of the south-central Andes. In 1996 Joan Parisi Wilcox traveled to the Andes and was able to record the mysteries of kawsay pacha, the multidimensional world of living energy, through more than 40 hours of intensive interviews with six Q’ero paqos, masters of the ancient spiritual traditions of Peru.
The Q’ero are known for having preserved the Inca spiritual tradition more purely than any other indigenous population in the Andes. The in-depth interviews presented in this book recount the direct words of these masters so readers can discover for themselves the mind and heart space of these people. Four new chapters of this revised edition focus on the work of the mesa, the Andean form of a spiritual medicine bundle, and its use as a conduit for the healing energies of nature. The mesa is called the “heart’s fire” because it represents the finest energy--the energy of compassion--that a paqo cultivates while walking the sacred path. Wilcox provides instructions on how to make, activate, and work with a mesa, as well as other practical exercises showing how we can use the power of the Andean spiritual tradition in our own lives.

Chapter 5
The Grandsons of Inkarí

Explicit in the Q'ero version of the myth recounted below is the Q'ero's claim that they are descendants of this first Inka--they are lnkarí's grandsons. What is not explicit is their belief that Inkarí bestowed upon the Q'ero a unique and precious gift. According to our guides, Juan and Américo, the Q'ero claim that Inkarí bequeathed them mystical knowledge, designating them keepers of the ancient knowledge, a reputation they retain to this day among Andean paqos. In contrast to the Q'ero, the people of Cuzco, the imperial capital, were bequeathed the administrative and political knowledge that allowed them to build one of the greatest empires of the southern hemisphere.

Don Julian Pauqar Flores was the bearer of the Inkarí myth for the Q'ero assembled in Urubamba. He told me the tale of Q'ero's founding with reverence and solemnity. After the telling of the tale, other Q'ero added variations they had heard from their relatives and ancestors, or added details that don Julian had missed. For the sake of narrative flow, I have merged these details into the tale proper. What follows is the story, passed down generation to generation, of the Q'ero's royal lineage and of the origin of their identity as master paqos and as the bearers of the spirit of the Inka.

"My grandfather told me that Inkarí had a golden staff," began don Julian, "and he threw the golden staff from Raya Qasa [a border town between the high plains and the mountainous regions of south-central Peru]. As Inkarí was trying to throw the golden staff, Qollari, the wife of Inkarí, tickled him in his right armpit. Because she tickled him, the throw missed Q'ero. If the staff had hit the land of Q'ero, Q'ero would have been the qosqo [literally the "navel"--the center or capital city] of the Tawantinsuyu. But the staff missed Q'ero and landed in Cuzco, which became the capital of the Tawantinsuyu. And so Cuzco was founded. If this golden staff had landed in Q'ero, Q'ero would have been in a valley, rather than in such high mountains.

"In Cuzco, Inkarí built a huge temple. He also built many houses, grand houses such as Saqsawaman. He built a solar clock in order to measure the towns. He went to Machu Picchu, and there he built more grand houses. Returning from Machu Picchu, he built Ollantaytambo [a town near Pisac at which is located a magnificent temple of the same name]. Then he remembered Q'ero. He said, "I will return to Q'ero to see my children." The proof of Inkarí's visit to Q'ero is two footprints in stone, which are still there in Upispata [a hot spring near Q'erol].

"Inkarí did not live very long in Q'ero. He stayed only about a week. If he had stayed longer, he would have had to build a town. He was awaiting the arrieros, and when they did not arrive, he left. He went on to Ollantaytambo, and as he was building his house there, our God arrived. God appeared as a man to Inkarí and told him, 'Inkarí, I will give you more munay [capacity to love].' But Inkarí said, 'What munay? I have my own munay.'

"God saw out of the corner of his eye that Inkarí was herding rocks with a crop, like we would herd llamas. Inkarí built houses this way, not by doing useful work but by saying to the stones, 'You must become a wall!' and the stones became a wall. But over time, the stones began to disobey Inkarí. Seeing this and wanting to restore the stones' previous abilities, Inkarí remembered the person who had offered him more munay. Inkarí now looked for this person, but the person had disappeared. And because of that, now men must carry stones only by the power of their own arms. We can no longer make the stones obey our will. If Inkarí had received that additional munay, we could today build houses by commanding the stones to move.

"Inkarí left Ollantaytambo and went to Paytiti. That is where Inkarí now lives. Because of the will of Inkarí, now the Vilcanota River carries the excrement of the llamas. When Inkarí sees the excrement of the llamas, he is reminded of his grandsons, the Q'ero, who herd llamas, and he weeps with longing for us. Because of all these things, we in Q'ero are known to this day as Inkas.

"We are the grandsons of Inkarí."

When don Julian's story was translated from Quechua to English, I was mesmerized. The story's simplicity, beauty, and austere reverence moved me deeply. . . . Don Julian's words brought home to me the import of our project, of recording at least part of the Q'ero spiritual tradition before it was lost. I was grateful for the opportunity to hear this primordial myth of the Q'ero's mystical history from the paqos themselves, especially after having heard their version of their recent historical and political past. Both perspectives helped me more deeply appreciate the initiation stories I had already recorded during the previous two days of interviews. I now better understood how the Q'ero could so easily and seamlessly synthesize the best from both lineages--the Western, Christianized tradition of their conquerors and the animistic and magical tradition of their mythic forebears. The Spaniards may have founded Lima and birthed a nation, but Inkarí had founded Q'ero and birthed a lineage of paqos. Each of the Q'ero who sat before me now had struggled to find his rightful place in both of these worlds, and their personal initiation stories, which follow in the next two chapters, reveal their individual journeys along the sacred path and into the heart of the mystery.
Joan Parisi Wilcox

Joan Parisi Wilcox has been studying the spiritual arts of Peru since 1993 and has received the rites of the Q’ero and other Andean masters. She is the author of Ayahuasca: The Visionary and Healing Powers of the Vine of the Soul and has published articles in Shaman’s Drum and Magical Blend. She lives in North Carolina.

"A treasury of shamanic knowledge and practices whose insights into an ancient wisdom can help those of us living in a modern society find attunement with nature and harmony within ourselves."

"The Q’ero have preserved a path for which many in the modern world hunger and thirst--how to participate in a world of living energies."

– William Sullivan, author of The Secret of the Incas

"Treats the beliefs and religion of the Quechua people with profound feeling and a deep identification seldom seen."

"Joan Parisi Wilcox has given us a mature and sensitive portrait of a mystical system as seen through the eyes of its practitioners, the Q'ero. Written with heart and respect, this book is a gateway for serious seekers to discover the world of living energy and to learn how to live in harmony with nature and each other."

– Deepak Chopra, author of The Seven Spiritual Laws of Success

"You will bring the word of the Q'ero to the world."

" . . . a really fabulous book! . . . if you have any interest in the 'Mystical Q'ero' (who had been thought of only as 'legends' before their re-appearce in the late 50's!), this is probably the most legitimate over-view that's out there . . . highly recommended!"