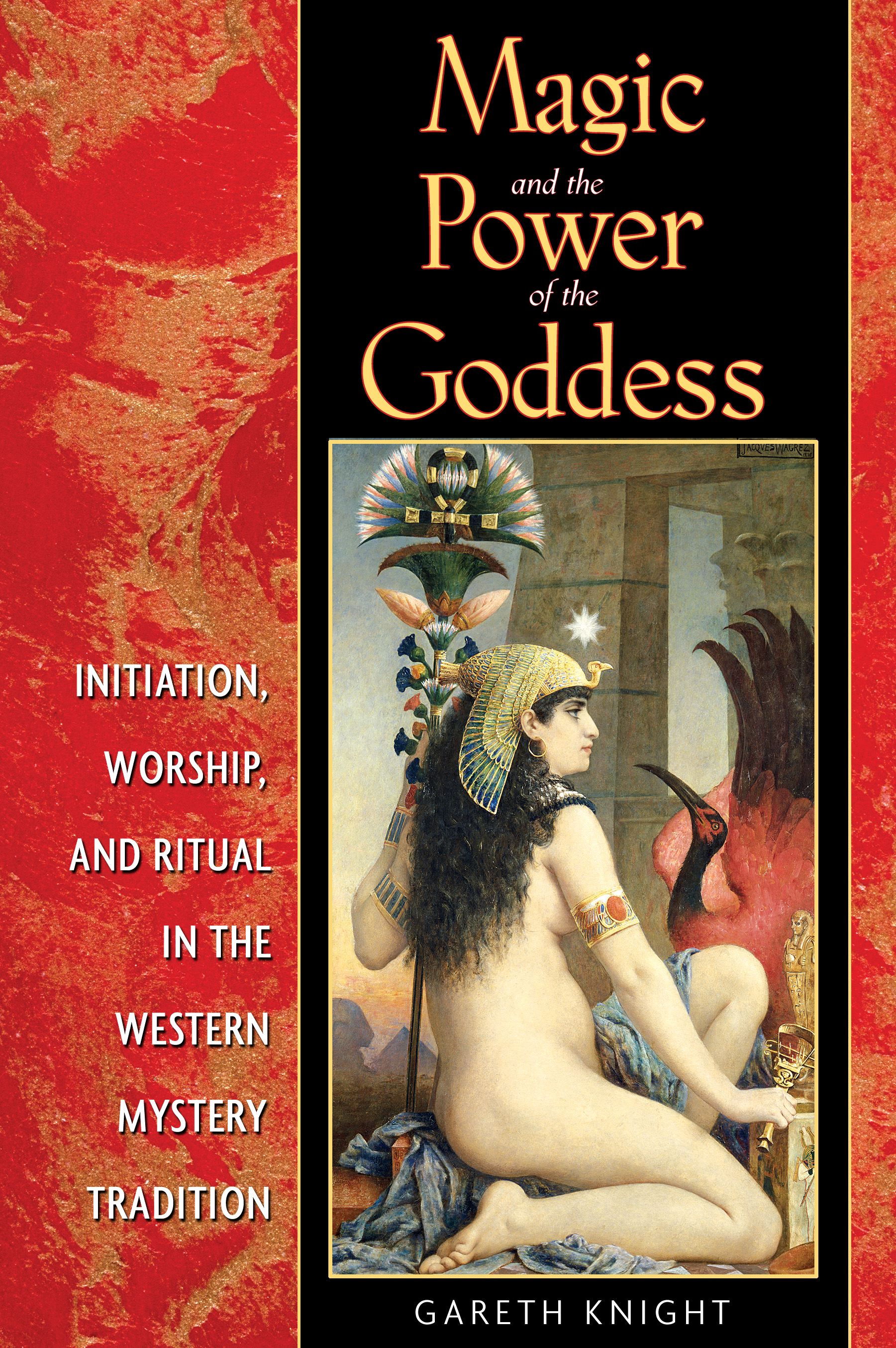 Magic and the Power of the Goddess

Initiation, Worship, and Ritual in the Western Mystery Tradition

• Includes rituals, exercises, and techniques for evoking the Goddess

In this wide-ranging view of magic and ritual, Gareth Knight demonstrates the presence of the Goddess throughout Western esoteric traditions. From Greek myths and the Mysteries of Isis to the emergence of the cult of the Blessed Virgin and seventeenth-century Rosicrucian spiritual alchemy, he shows how the Goddess--the elemental consciousness of Earth--has revealed herself in different times and places.

Honoring her many guises, Knight explores the powers of the Goddess as maiden, mother, initiator, protector, sorceress, and faery queen. Guided meditations on each of these qualities lead the practitioner into direct contact with the potent healing energy of the Divine Feminine. The author also offers rituals, exercises, and other practical tools for integrating the Western magical tradition with worship of the Goddess. He shows how we, and our planet, have suffered due to the repression of the feminine principle. For our own health, and that of our environment as well, we must recognize the power of the Goddess within to reconstitute and guide our existence.

The magic circle is a model of all that exists in creation. It therefore holds within itself both masculine and feminine principles. In one sense the center is the masculine, the central point, the seed; the circumference is the feminine, the womb within which all that occurs can be brought to fruition and new life.
And insofar as all creation is an expression of form, and it is through form that spiritual potential may be expressed, the whole circle is very much an expression of the feminine. This is revealed by the way it responds to the cycles of nature, be they the nodal points of the day and night or the seasons of the year. The dynamics of the circle are the aspects of the Goddess.
The fourfold cycle of the seasons and of the daystar is one way in which the magic circle may be expressed. That is: spring, summer, autumn, and winter; dawn, noon, dusk, and midnight. These stations also mark the elemental cross of air, fire, water, and earth at the cardinal points of east, south, west and north. The symbols of these directional stations of inner space are the sword, the wand, the cup, and the disk.
From these fourfold properties derive all the other attributes that form a model of the human soul and also of the universe. In the star stations of the zodiac, of what we might call the girdle of the Goddess, are further symbols of this cross. They are the cherubic emblems of the vision of Ezekiel, later adopted as the emblems of the Evangelists: the man, the lion, the eagle, and the bull, or Aquarius, Leo, Scorpio, Taurus--the “fixed” signs of the Zodiac.
Thus a great compendium of symbolic lore can be made that may form the alphabet for a mode of communication between the planes. From use of the symbolism a language is made. But mark the word use. It must be made a part of the fabric of our being, by meditating upon the stations. This includes, but is much more than, intellectual speculation. We must read the magic circle with the feet as well as with the heart and mind.
Merely to read these exercises is to miss the experience. You cannot travel to market without stirring your feet and you cannot experience reality from the pages of a book. The pages can guide your feet, but it is up to your feet to follow. Intellectual curiosity and impatience are no substitute for patient plodding behind the plow. Mental speculation grows and hoes no cabbages. You learn only by doing. If you are not prepared to learn by doing you may as well close this book. It has nothing to teach you.

Mark out a circle upon the ground. This act is a parallel of the original act of creation. It involves the determination of a center and of a certain area of influence. Take a rod or peg to hold a stable center, and from it extend a cord. Start with the cord wrapped around the rod as if drawing spun thread from around a spindle. Proceed in a clockwise direction, to unwind the cord. You will find that you mark or trace out a spiral dance that culminates in a circle. Thus are you reenacting the primal creation. Do this many times, fully aware of the significance of what you are doing. You will thus learn much of your spiritual origin and the principles of creation.
In treading the primal spiral, you may become aware of primal masculine and feminine principles. As central seed shooting forth into manifestation forms the cosmos from apparent nothingness, one is asserting the masculine. As one unwinds the spiral path, one is partaking increasingly of the feminine until at the outermost circle the feminine principle, as polar complement to the central point, is fully displayed.
(Incidentally, this feminine involvement with the serpentine way is one expression of cosmic truth behind the much misunderstood story of Adam and Eve and the Serpent. In other ancient creation myths, such as the Orphic, the feminine principle danced with a snake to create the worlds. It is a strange twist of Judaic interpretation of the ancient myths that caused this story to be interpreted in terms of original sin and female moral inferiority.)
The first time you perform this exercise you will be preoccupied by physical problems and distractions. With persistence you will find that you can perform it with your inner faculties to the fore, aware of the profound significance of the pattern that you trace.
Early humans spent much time and effort carving spiral symbols on rock. You will be much rewarded by spending a fraction of that time and effort carving these same symbols upon your consciousness.
You may find it worthwhile to construct a pillar as a central pole for your circumambulations. If outdoors you might utilize a tree.
These props will not be necessary after a time. You can later tread the spiral and circular path from an imaginary point. It is no less real because it is fixed only in the imagination. But initial grounding in the physical is important.
The dynamics of scale are also important. Scale is a measure of human proportion. Let the circle so traced be relative to the human form--some six to twelve feet in diameter. Certainly no less, probably not much larger. Tracing out spirals and circles on a sheet of paper is no substitute. Expression by treading is of prime importance. When you have constructed a circle in this manner you can leave the implements of construction behind. Then, whenever you wish, you can tread the spiral and circle dance in meditation, fully aware of the profound significance of the patterns that you tread.
Gareth Knight

Gareth Knight has spent a lifetime unearthing and teaching the principles of magic as a spiritual discipline and method of self-realization. He was trained in the esoteric school founded by Dion Fortune and has been actively involved in the Western magical tradition since the early 1960s. He is the author of thirty books, including Tarot and Magic, A Practical Guide to Qabalistic Symbolism, and Magic and the Power of the Goddess. He lives in England.

"This book is must-reading for those interested in goddess power. Well-written, it will educate you and entertain you at the same time! Congratulations to the author, Gareth Knight, on a job well-done."

"Over the years, Gareth Knight has been very much an innovator and opener of new ways in the Western Mysteries. At a time when this stuff was generally reserved for secret lodge meetings and when many groups frowned upon individual thought and inner work, he was one of the first to encourage people to meet and practice magic in living rooms and public workshops. Magic and the Power of the Goddess--perhaps the best in the list of impressive titles that have flowed from Knight's prolific pen--is very much an expression of this original, initiating spirit."

"If you've got the intellect and self-discipline to pursue this branch of magic, you'll find the work in this book enormously rewarding."

Magic and the Power of the Goddess

Initiation, Worship, and Ritual in the Western Mystery Tradition