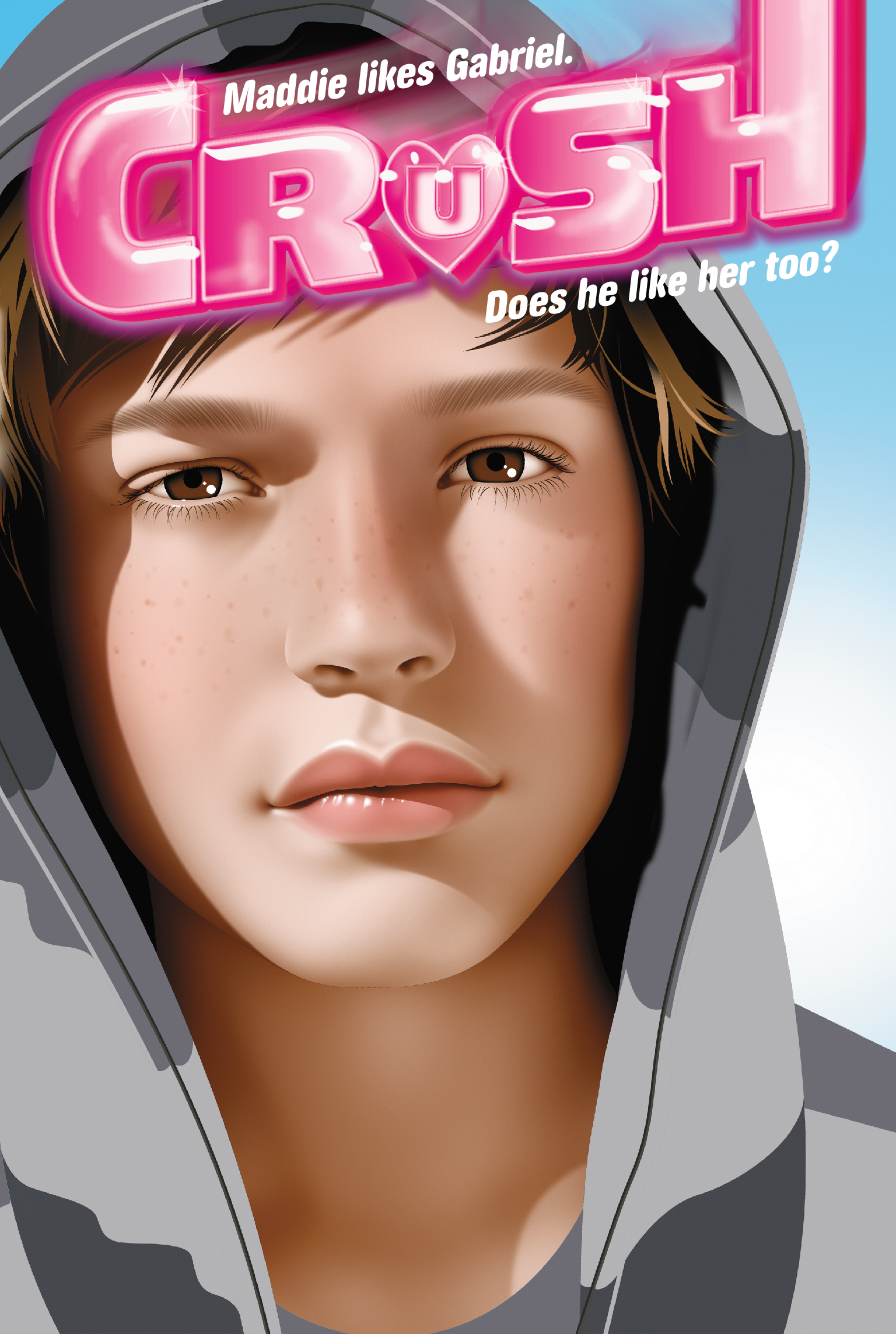 Book #2 of Crush
By Angela Darling
LIST PRICE $5.99
PRICE MAY VARY BY RETAILER

When a summer-camp crush goes both ways, what comes next?

Madeline isn’t thrilled that her mother has signed her up for sleepover camp for the whole summer. So Maddie arrives at camp cross, cranky, and ready for one long, hot summer. But then she spies Gabriel, beautiful Gabriel, with a British accent to boot. It’s fun having a crush on Gabriel. It’s fun watching him, and noticing what he’s doing, and keeping track of him. But then Gabriel spies Maddie. And he seems to have fun watching her, noticing what she’s doing, and keeping track of her, too. What happens when a crush works both ways? Does it have to go anywhere? Maddie is about to find out.

“MOM, YOU WERE SUPPOSED TO TURN LEFT, NOT right!” Maddie Jacobs said impatiently as her mother turned down a lonely looking dirt road.

“Recalculating,” announced the cool computer voice of the GPS.

Mrs. Jacobs brushed a strand of brown hair from her face. “I’m just doing what the stupid machine told me to, Maddie,” her mom explained in a voice filled with frustration.

“Actually, that is not what the stupid machine told you to do,” Maddie pointed out. “By the time we get to camp, the season will be over!”

Maddie leaned back in her seat and resisted the urge to make another comment. Mom had been such a mess since Maddie’s father died in the fall. Losing Dad had been hard on everybody, but her mom just didn’t seem to be getting any better. It sounded harsh, but sometimes Maddie wished she would just get it together already.

Sighing, Maddie turned to look out the window. Camp was an hour and a half away from home, in the woods of Pennsylvania. The roads were lined with green trees, and the sky above was a perfect July blue. But looking at the familiar scenery only made Maddie feel sad.

When Dad was alive, the trip to camp had been one of the most fun parts of the whole summer. Dad would sing songs that he’d learned at camp when he was a kid, and he’d roll down the windows and they’d all sing along with him loudly. Then he’d make corny jokes about camp, and even though he told the same ones every year, Maddie would still crack up.

“Why did the camper put a snake in the other camper’s bed?” Dad would ask, and Maddie would pretend she didn’t know the answer.

“Because she couldn’t find a frog!” Dad would finish, and he and Maddie would laugh while her mom rolled her eyes—but she was always smiling.

Then when they got to camp, he would give Maddie the biggest, tightest good-bye hug ever, and he would even pretend to cry, making all her camp friends laugh. In truth Maddie was always a little sad when her parents left, but she never missed them for long because her dad always left a funny note hidden somewhere that Maddie would find—under her pillow or tucked in her slipper or even in the pocket of her bathrobe. Her throat tightened as she thought about the fact that there wouldn’t be a note this year. She started to tear up, and she turned to the window to make sure her mom wouldn’t see her.

After a deep breath, Maddie glanced at the clock. It was 11:03, and she started to feel anxious. Check-in had started an hour ago, and the girls who checked in first got to pick their beds first. If she didn’t get to sleep near Liza, Libby, and Emily, her best camp friends, it would be terrible.

I’ll probably end up with a bed next to the shower or the bathroom or something, she thought gloomily. Liza had said she would try to save her a bed, but they weren’t supposed to do that, so Maddie was sure she’d be stuck. She wouldn’t be surprised, considering how things had been going wrong ever since last night. After Maddie had packed her duffel bag with everything she needed for six weeks of summer camp, her mom realized that she couldn’t lift it and drag it down the stairs to the car. That had never been a problem for Dad. He would always hoist it high over his head and say, “Oof, Mads, what did you pack, brick bathing suits?”

So this morning Mom had called Mr. Donalty from next door and he’d put the bag in the car for them. He was really nice about it, but the whole thing made Maddie miss her dad even more. Besides that, Mom had forgotten to make her special going-away breakfast. Dad had always made her French toast or pancakes.

“Eat up, Mads,” he’d say. “You’re going to be eating that icky camp food for weeks!”

All Mom had said this morning was, “Are you hungry?” Maddie had answered no, but Mom handed her a bagel as they left the house.

Now she snuck a look at her mother, who was leaning close to the steering wheel and gripping it tightly. She knew that Mom hated driving far from home, but she didn’t accept Uncle Jay’s offer to drive them up this year. Maddie wasn’t sure why, but her Mom had been funny about accepting help from anyone lately.

Maddie’s thoughts shifted to her camp friends, Liza and Libby and Emily. They’d come to the funeral last fall, but that whole thing was a blur. Maddie had been texting them all year long, but it wasn’t the same as seeing them in person. She couldn’t wait until they could all hang out together, laughing and talking like they always did. Just as long as they didn’t want to talk about her dad . . . . She didn’t care if Libby told that story about when the possum surprised her in the bathroom that one summer, even though Libby had told it a million times already. She’d rather talk about anything but her dad.

“Camp is going to be good for you, Maddie,” her mom had said when Maddie had talked about skipping it this year. “It’ll take your mind off things.”

Maybe Mom was right, Maddie thought. The excitement of seeing her camp friends again was a really good feeling, a feeling she hadn’t felt in a long time.

“Mom!” Maddie yelled, and her mother jumped in her seat.

“Don’t yell while I am driving, Madeline!” she yelled back.

Maddie pouted quietly while her mom made another turn. Finally, Maddie saw the familiar sign down the road to the right: CAMP WIMOWAY ENTRANCE A.

“Finally!” Maddie cried, and a look of relief came over her mom’s face as she turned down the narrow winding road to camp.

The tree-lined road emerged into a clearing of rustic wood cabins. Cars filled the parking lot as parents dropped off their campers, but Maddie didn’t recognize any of them . . . because they were all boys!

Maddie and her mom exited the car, confused. A male counselor wearing a red Camp Wimoway shirt approached them.

“Here for drop off?” he asked.

“We’ve rearranged camp this year,” the counselor informed them. “We sent out a map and a note, but some parents didn’t get them, I’m afraid.”

“You should have gone to Entrance B,” the counselor explained. “It’s about a quarter mile down the road and then you make a left.” Mrs. Jacobs took a little notebook from her purse and he started to draw a map for her.

Maddie remembered that Entrance B led to the camp where the “baby” camp division was—the camp for kids who were, like, six to eight years old. And now that was where the girls’ camp was? How embarrassing! Why couldn’t Mom have read that e-mail? She started to slink back into the car before anyone noticed she was in the wrong place, but curiosity took over and she looked around at her old camp once more. It was weird to think that the boys were now living where the girls used to live.

A mom and dad walked past with a crying little boy, and Maddie knew how he felt. She had cried her first year in camp too. She looked at her cabin from last year and saw a couple of the boys her own age hanging around on the steps: Jared and Evan. They both looked so much taller than they were last summer! Then Brandon walked up to them. He lived only one town over from Maddie back home, and they had taken a tennis class together in the spring. He nodded at her, half-waving, and she looked away.

He’s probably wondering why I’m standing in the middle of the boys’ camp like a loser, she thought, and then she turned to open the car door, eager to become invisible before anyone else noticed her.

The sound of a voice coming from a nearby bunk made her pause. It was a boy’s voice, a really cool, deep voice with a British accent. She turned slightly and saw a boy about her age—a boy with the most beautiful face she had ever seen.
Angela Darling

Angela Darling was nicknamed “The Love Guru” by her friends in school because she always gave such awesome advice on crushes. And Angela’s own first crush worked out pretty well… They have been married for almost ten years now! When Angela isn’t busy reading romance novels, she works as an editor in New York City. She knows deep down that every story can’t possibly have a happy ending, but the incurable romantic in her can’t help but always look for the silver lining in every cloud.

Book #2 of Crush
By Angela Darling
LIST PRICE $5.99
PRICE MAY VARY BY RETAILER