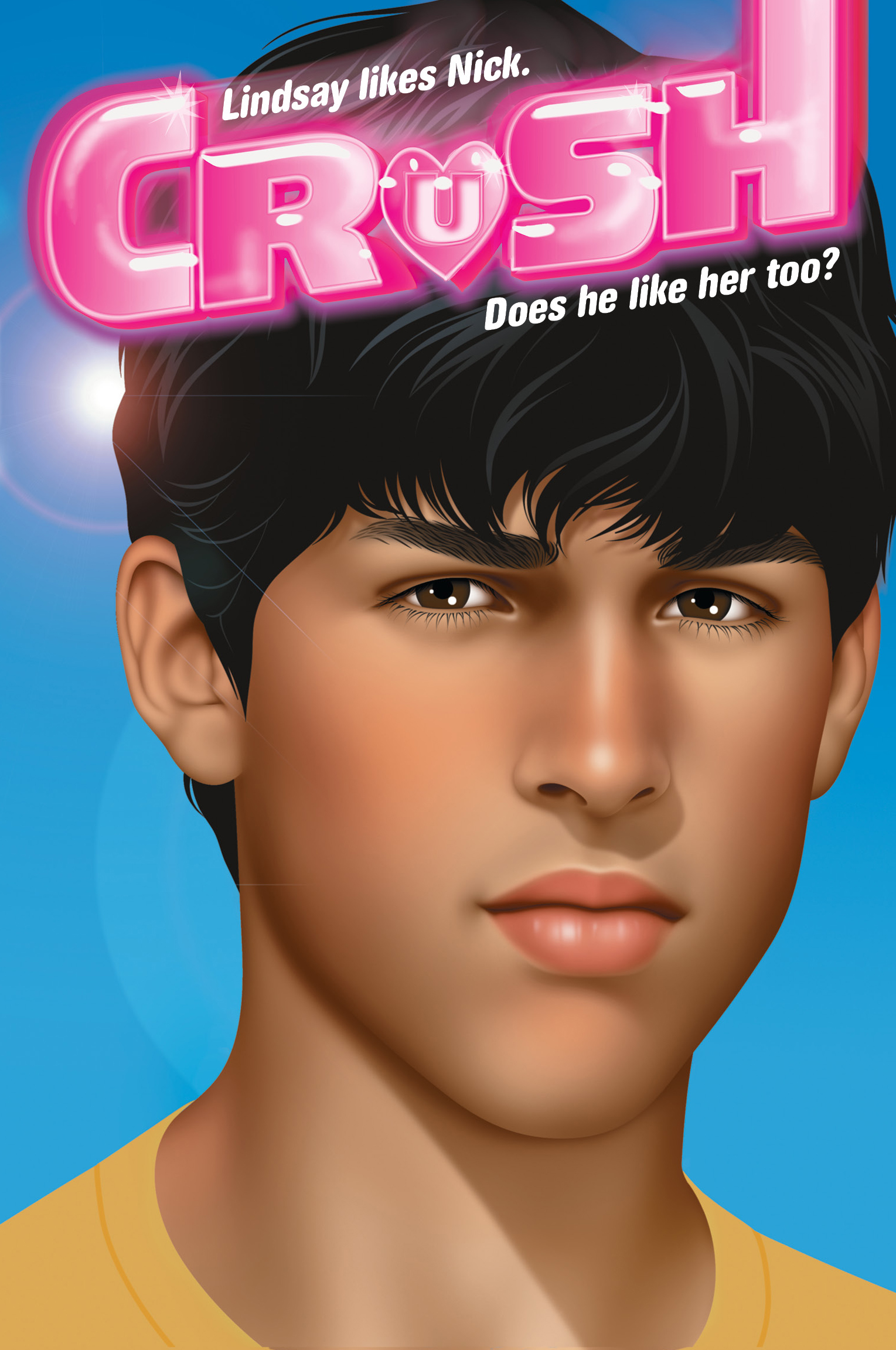 Book #3 of Crush
By Angela Darling
LIST PRICE $15.99
PRICE MAY VARY BY RETAILER

What happens when your best friend turns into your first crush?

Lindsay Potter and Nick Lopez have been best friends since birth. Nick’s been away all summer, and Lindsay can’t wait to see him again. But on the first day of school, she barely recognizes him. Not only did he grow about a foot taller, but over the summer Nick morphed into the cutest boy in school…and quite possibly the world. Nick instantly becomes the most popular boy in seventh grade, and practically every girl is crushing on him. Including Lindsay. What’s a BFF to do?

Lindsay’s Surprise Crush chapter 1
“DID YOU HEAR WHAT HAPPENED TO NICK LOPEZ?”

A tingle rippled up and down Lindsay Potter’s spine. She stared at her friend Rosie. “No! What? What happened to him?” she asked.

“You’ll never believe it,” said Rosie, lowering her voice to a whisper. Then she glanced at someone over Lindsay’s shoulder. “Oh! Look! Sasha got her hair cut!”

Lindsay turned, trying not to show her frustration, and smiled and waved at Sasha, who was just stepping off her bus to join the throngs of kids milling around and socializing on the first day of school. She turned back to Rosie, trying to keep her voice even and not sound too anxious. “What happened to Nick?”

“Oh! Right. Nick. Well, I heard from Chloe, who heard from Jenn, that he—”

“Move along, girls, the bell’s going to ring any minute,” said Mr. Drakely, the teacher on morning bus duty. He was herding middle schoolers in the direction of the main school entrance. Sure enough, the bell rang a moment later.

“See you fourth period!” called Rosie, hustling up the steps, her new purple backpack bouncing on her back.

Lindsay’s thoughts were swirling as she made her way quickly to her locker. She knew just where it was—she’d had the same one last year, her first year of middle school. She spun the dial for her combination and wondered if anyone had managed to fix the sticky door over the summer. One yank told her no one had. Sigh. Another year with a sticking locker door.

Twang! The locker finally decided to open. She smooshed a few things into it and slammed it closed again, eager to get to homeroom to find out what had happened to Nick.

Nick was her best friend. They’d been babies together. Actually, their friendship was even older than that. Their moms had met in pregnant-lady-exercise class!

How could she not know what major catastrophe had happened to her best friend? True, they hadn’t seen each other since June. She’d gone off to visit her cousins in Cleveland for a week, and when she’d gotten back, he was already gone—first to baseball camp, then soccer camp, then some other kind of jock camp way out in the wilds of Maine, near where his dad lived. And when he finally returned, she had been gone again, first to music camp, and then her family drove her older brother up to college to help him move in.

Maybe Nick had broken his leg or something! She frowned. Maybe whatever had happened to him was the reason he hadn’t returned her texts last night. She’d texted him twice, once to tell him they were in the same homeroom, and then again to ask him if he’d heard the rumor that Mr. Bates assigned homework to his homeroom students. And he hadn’t responded. Was he in the hospital? In traction? No, he would have been able to text if he were in traction. Maybe both his hands were bandaged with second-degree burns or something? She swallowed uneasily. What a way to start seventh grade.

She walked into Mr. Bates’s homeroom. The second bell had not yet rung, so kids were wandering around, chatting, hugging long-lost friends, and complimenting haircuts and new sneakers. She looked around the room quickly, trying to spot Nick. He wasn’t there. Maybe something truly terrible had happened to him!

She saw Jenn, who waved her over toward the desks near the window. She also saw some really tall new guy who was surrounded by kids. He seemed to try to catch her eye, but she looked away quickly. She could feel the worry creeping over her.

“Did you see Nick?” a voice whispered from her right side.

She turned. It was Sasha.

Sasha pointed quickly with her finger. A tiny giggle escaped her.

Lindsay followed her gaze. Her brow furrowed. What was Sasha talking about? She seemed to be pointing toward that new kid. He was a head taller than all the other kids in the room. He looked tall enough to be in high school. Was he standing in front of Nick? Lindsay craned her neck to get a better look. The new kid had really dark hair and broad, muscular shoulders. He looked really cute from behind. And then he turned around. He . . .

Angela Darling was nicknamed “The Love Guru” by her friends in school because she always gave such awesome advice on crushes. And Angela’s own first crush worked out pretty well… They have been married for almost ten years now! When Angela isn’t busy reading romance novels, she works as an editor in New York City. She knows deep down that every story can’t possibly have a happy ending, but the incurable romantic in her can’t help but always look for the silver lining in every cloud.

Book #3 of Crush
By Angela Darling
LIST PRICE $15.99
PRICE MAY VARY BY RETAILER